A. Anusha and J. Krishnaveni *

INTRODUCTION: Felodipine is a calcium agonist used in the treatment of hypertension, heart failure and angina pectoris 1. It is practically insoluble in water and belongs to a class II drug of BCS classification 2. The oral bioavailability of felodipine is 15% due to its high lipophilic character 3. The oral route has been traditionally preferred for prolonged use.

Approximately 40% of new drug candidates have poor water solubility and the oral delivery of some drugs are frequently associated with low bio-availability, high intra and inter subject variability and a lack of dose proportionality 4, 5.

Several recent techniques have been used for their solubilization including micronization, complexation, solid dispersion, cyclodextrins, nanoparticles and co-precipitation. Recently, much attention has been paid to lipid based formulations to improve the oral bioavailability of lipophilic drugs 6. Lipid‐based formulation approaches, particularly the self‐ micro emulsifying drug delivery system (SMEDDS), are well known for their potential as alternative strategies for delivery of hydrophobic drugs 7.

SMEDDS formulations are isotropic mixtures of an oil, surfactant and co surfactant (or solubilizer). The basic principle of this system is its ability to form fine oil‐ in‐water (o/w) micro emulsions under gentle agitation following dilution by aqueous phases. This spontaneous formation of an emulsion in the gastrointestinal tract presents the drug in a solubilized form, and the small size of the formed droplet provides a large interfacial surface area for drug absorption. Apart from solubilization, the presence of lipid in the formulation further helps improve bioavailability by improving the permeation of drug 8. Because of small globule size, the drug can be absorbed through lymphatic pathways, thereby bypassing the hepatic first-pass effect. Number of researchers reported that the SMEDDs can improve oral bioavailability of low soluble drugs 7. Shen HR et al., 2006 reported increase in relative bioavailability (1.5 folds) of atorvastatin SMEDDS formulation compared to conventional tablet 9.

MATERIALS AND METHODS: Present investigation was carried out in the year 2016 at University College of Pharmaceutical Sciences, Kakatiya University, Warangal, and Telangana, India.

Animals: Male Wistar rats weighing between 200-250 g were used for ex-vivo studies. The animals were maintained at temperature (25 ± 2 °C), humidity (60 ± 5%) and were supplied with food and water. All experiments conducted on animals were approved by the institutional animal ethics committee, and the number obtained was IAEC/30/UCPSc/KU/2016.

UV Method: Felodipine was dissolved in methanol to get a solution of 100 µg/ml. From this stock solution, dilutions were made to obtain the concentrations of 1, 2, 4, 6, 8, 10 and 12 µg/ml. The absorbance of the samples was measured by UV spectrophotometer at 237 nm 14.

Solubility Studies: The solubility of felodipine in various oils, surfactants, and co-surfactants was determined by equilibrium solubility method at 37ºC 8.

A visual observation test to assess the self-emulsification properties was carried out by diluting 1000 times with water at 37 °C 15. The samples which are transparent were considered as nano / micro-emulsions 19. Phase diagram was constructed using Chemix software (version 3.51).

Preparation of Liquid SMEDDS: Liquid SMEDDS were prepared by dissolving drug in oil followed by the addition of surfactant and co-surfactant, vortexing the mixture after each addition 8.

Self-Micro Emulsification Time: The time taken for the emulsion formation was noticed upon drop wise addition of the pre-concentrate (SMEDDS) (100 µl) into 100 ml of distilled water in a glass beaker at 37 °C, on a magnetic stirrer at ~100 rpm.

Phase Separation and Stability Study of Micro Emulsion: 100 ml of liquid SMEDDS formulation (100 µl) was added to a test tube containing 5 ml double distilled water at 37 °C. After vortex mixing for 1 min, the sample was kept aside and observed for phase separation and precipitation of the drug, if any. The observations were made at intervals of 2, 4, 6, 8, 12, 24 and 48 h.

Effect of Dilution and pH on Droplet Size: The micro emulsion was subjected to dilutions (1:100, 1:500, 1:1000) and size of globule was measured. The formulations were diluted 1000 times with 0.1N HCl and phosphate buffer of pH 6.8 and the size was measured using zeta sizer.

Physical Stability (Freeze - Thawing): Formulations were subjected to 4 to 5 freeze - thaw cycles. Each cycle include freezing at - 20 °C for 24 h followed by thawing at 40 °C for 24 h. After completion of 5 freeze-thaw cycles, the samples were centrifuged at 3000 rpm for 5 min and observed for phase separation and precipitation of drug, if any 16.

Characterization by DSC: Pure drug and solid SMEDDS were evaluated by DSC (822e/200) perkin elmer, India. About 10 mg of sample was taken in aluminium pan, crimped and thermogram was recorded by heating at a rate of 10 ºC/min between temperature ranges of 50 - 200 ºC.

Nitrogen was used as purge gas and the system was cooled by liquid nitrogen.

Estimation of Drug Content: 1 ml of SMEDDS formulations equivalent to 5 mg of felodipine was diluted with 10 ml of methanol, centrifuged at 3000 rpm for 15 min to separate the undissolved excipients. The supernatant was suitably diluted and analyzed spectrophotometrically at 237 nm using UV spectrophotometer 17.

In-vitro Drug Release from Liquid SMEDDS: Drug release from liquid SMEDDS was determined by dialysis bag method using 0.1 N HCl, (pH 1.2) for 2 h followed by phosphate buffer of pH 6.8 for 14 h as medium. Initially, the dialysis tubing was soaked in the medium for 1 h at 40 °C. About 1 ml of SMEDDS formulation / drug suspension containing 5 mg of felodipine was placed in dialysis bag made up of membrane of molecular weight cut off 12000 - 14000 daltons. The dialysis bag was suspended in 100 ml of the medium and the contents were mixed on a magnetic stirrer at 100 rpm at room 37 ºC. Samples (2 ml) were collected at regular time intervals and replaced with equal volume of fresh medium. The Samples were analyzed by UV Spectrophotometer at 237 nm after appropriate dilution of the sample 18.

Preparation of Solid SMEDDS: The optimized formulation was adsorbed onto carriers (Neusilin) to produce solid SMEDDS (S-SMEDDS). The formulation was placed in a china dish, a pre-weighed quantity of inert carrier was added in small increments with continuous mixing to form homogenous powder 19.

In-vitro Drug Release from Liquid / Solid SMEDDS: Drug release from solid / liquid SMEDDS and drug suspension were carried out in USP apparatus using 0.1N HCl and phosphate buffer pH 6.8 as dissolution media. Solid -SMEDDS capsules and liquid SMEDDS, drug suspension equivalent to 5 mg of felodipine were placed in 900 ml of media, rotated at 50 rpm at 37°C. Aliquots of samples were withdrawn at time intervals of 0.25, 0.5, 1, 1.5, 2 h and replaced with fresh medium. The samples were immediately filtered and analyzed for felodipine content by UV method 20.

Normal Sac Method: The study was carried out to assess the permeation of drug from optimized formulation (5 mg) and drug suspension across the small intestine. The rats were sacrificed by cervical dislocation technique and jejunum of 4 cm segments were isolated, flushed with saline solution and transferred into oxygenated Kreb’s ringer solution. The one end of the sac was tied with thread and filled with the sample or control (1 ml) and the other end was tied. The segment was immersed in 100 ml of Kreb’s ringer solution and the medium was oxygenated using aerator. At regular time intervals (15, 30, 45, 60, 75, 90, 105, 120 min) samples were withdrawn and analyzed for drug content 21.

Single Pass Intestinal Perfusion Study: The in-situ single pass perfusion studies were performed using male Wistar rats weighing between 180 and 250 g using perfusion pump (NE-1600, NEW Era syringe pumps, Wantagh, NY). The rats fasted over night with free access to water were anesthetized by an intra peritoneal injection of thiopentone sodium (60 mg/kg body weight) and placed on a thermostatic surface to maintain body temperature. Under anaesthesia, an incision was made through a midline to expose the abdomen. The lower part of the small intestine segment was exposed and semi circular incisions were made at 10 cm apart and cannulated with poly ethylene tubing by ligation with silk suture. After cannulation the surgical area was covered with cotton soaked in physiological saline. The intestine segment was flushed with phosphate buffered saline pH 6.8 at 37 ºC for 30 min. The perfusates prepared by dispersing SMEDDS formulation equivalent to 5 mg of felodipine containing phenol red (20 µg/ml) in phosphate saline buffer pH 6.8 was passed at a steady state flow rate of 0.2 ml /min for 120 min.

The perfusate samples were collected in test tubes for every 15 min intervals up to 120 min. At the end of the perfusion the circumference and the length of the perfused intestine was measured. Pure drug dispersed in 1% w/v PEG 400 containing the same amount of felodipine was also studied for comparison. Each experiment was performed in triplicate. The perfusate samples were allowed to thaw, deprotenised using methanol, centrifuged and the drug content in the supernatant was quantified by UV method. Effective permeability coefficient in rats and humans and enhancement ratio was calculated by following equations 22.

Ternary Phase Diagram: Formulations (series 1) containing oleic acid, tween 80 and PEG 400 yielded turbidity upon dilution. No transparent system was noticed. The size of globules varied between 525µ to 1731µ. The series I could not provide any region of micro emulsion. Series II formulations prepared by using capmul MCM, tween 80 and PEG 400 were shown in Table 1.

Drug 5 mg common in all formulations

Phase Separation: No precipitation of the drug in selected micro emulsion formulations was observed after 2, 4, 6, 8, 12, 24 and 48 h.

TABLE 3: EFFECT OF DILUTION WITH DISTILLED WATER AND MEDIA ON DROPLET SIZE OF THE SMEDDS FORMULATIONS

Effect of Dilution and pH on Droplet Size of Selected Formulations: The effect of dilution and pH was studied for selected formulations and the results were shown in Table 3.

There was no significant difference found in droplet size of the formulation. Variable effect of pH was noticed. Whereas, formulations F7, F11, F16 and F18 resulted in increased droplet size due to dilution.

Physical Stability of Pre-concentrate during Freeze - Thawing and Storage: The selected formulations after subjecting of 5 Freeze- Thaw cycles were stable showing no phase separation or precipitation of the drug.

Ex-vivo Permeation Studies by Normal Sac Method: The ex-vivo drug permeation profile was shown in Fig. 7. The release of drug from formulation F16 was significantly higher (P<0.007) (93%) than the drug suspension (62%). 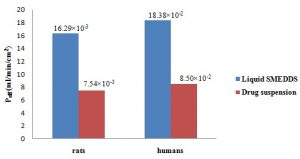 The Peff (human) values were predicted by correlating with the obtained rat Peff values. The significant improvement in Peff (human) of felodipine loaded liquid SMEDDS formulation (F16) compared to control can be attributed to increase in effective surface area for absorption owing to dispersion of drug in micro emulsion droplets. Enhancement ratio was found to be 2.15 ± 07. The enhancement ratio above 1 indicates an enhanced permeation with SMEDDS formulation, conferes their potential as a carrier for improving absorption of felodipine.

Capmul MCM and PEG 400 is mucosal permeation enhancer known to modulate the membrane fluidity and thus enhance the drug formulation contained tween 80 and PEG 400 as Smix.

Statistical Analysis: All studies were done in triplicate and data represent the mean ± standard deviation. The statistical analysis was performed using t-test and ANOVA using graph pad prism software. A difference below the probability level (P < 0.05) was considered significant.

ACKNOWLEDGEMENT: The first author would like to thank state government, Telangana, India; for providing financial support and Kakatiya University for providing the laboratory facilities.

CONFLICT OF INTEREST: The authors have no conflicts of interest relevant to the content of the manuscript.

A. Anusha and J. Krishnaveni *