ABSTRACT: Nanotechnology is an advancing technology expected to bring revolutionary changes in the field of life sciences including drug delivery. The advance in nanotechnology helps in the preparation of new pharmaceutical formulations with high benefits. One of its approaches is to stabilize the niosomal drug delivery system without affecting its properties have resulted in the development of proniosomes, a drug carrier. Proniosomes are solid colloidal particles which may be hydrated immediately before use to yield aqueous noisome dispersions similar to those produced by conventional methods. These proniosomes minimize the problems related to conventional niosomes such as aggregation, fusion, leaking and provide additional convenience in transportation, distribution, storage and dosing with enhanced stability. Ofloxacin loaded maltodextrin based proniosomes were prepared by a slurry method with a different surfactant to cholesterol ratio. The formulated proniosomes possessed good flow property and smooth surface confirmed by SEM study. FTIR spectra’s confirmed no interactions between drug and carrier. The niosomal dispersions were formulated and further evaluated for particle size, polydispersity index (PDI), zeta potential, TEM, entrapment efficiency, in-vitro drug release, and kinetic studies. F4 formulation showed highest entrapment efficiency of 87.16% and sustained release of drug with diffusion mechanism.

Various novel approaches have been used for the delivery of drugs include vesicular drug delivery systems, nanoparticles, microemulsions, magnetic microcapsules, implantable pumps, etc. They are having added benefits over conventional dosage forms such as increased bioavailability, site-specific drug delivery, sustained release of drug for a longer period, retention of the dosage form in the entire length of GI tract and convenient to the patient due to reduced dosing frequency 1.

In recent past, niosomes have been extensively studied for their potential to serve as a carrier for delivery of drugs, antigen, hormone and other bioactive agents. These are non-ionic surfactants based multi or unilamellar vesicles and are structurally similar to liposomes. They are biodegradable, biocompatible and flexible 2. Niosomes possess several advantages over liposomes such as chemical stability, purity, and low cost. But like liposomes, aqueous suspensions of niosomes may exhibit aggregation, fusion, leaking of entrapped drugs or hydrolysis of encapsulated drugs, thus limiting the shelf life of the dispersion. Proniosome would avoid many of the problems associated with aqueous noisomal dispersions and problems of physical stability 3.

Proniosomes are dry, free-flowing formulations of water-soluble carrier particles that are coated with a surfactant and can be measured out as needed and dehydrated to form niosomal dispersion immediately before the use with brief agitation in hot aqueous media. The resulting niosomes will be very similar to conventional niosomes and more uniform in size. Proniosomes are microscopic lamellar structures formed by combining a non-ionic surfactant of the alkyl or dialkyl polyglycerol ether class and cholesterol followed by hydration in aqueous media. The surfactant molecule directs themselves such that the hydrophilic ends of the non-ionic surfactant orient outward, while the hydrophobic ends are in the opposite direction to form the bilayer 4. Proniosomal formulations based on maltodextrin were recently developed to deliver hydrophobic or amphiphilic drugs. The principal advantage of this formulation is the amount of carrier required to support the surfactant can be easily adjusted. It is a widely used approach because of the ease of production of proniosomes and hydration of surfactant from proniosomes 5, 6.

The present study is aimed at overall improvement of therapeutic efficacy of antibacterial drug Ofloxacin through proniosome encapsulation. Ofloxacin is a fluoroquinolone antibacterial agent. It is a broad spectrum antibiotic active against both gram-positive and gram-negative bacteria 7. It inhibits the supercoiling activity of DNA gyrase and halts DNA replication 8. It is used in various urinary and respiratory tract infections 9, 10, gonorrhea 11, soft tissue and skin infections 12. The poor aqueous solubility of Ofloxacin gives rise to difficulties in the design of pharmaceutical formulation which leads to variations in dissolution, absorption and bioavailability 13.

Initially a 250 μmol stock solution of span-60 and cholesterol in chloroform: ethanol (2:1) solvent mixture was prepared and kept. The drug was then dissolved in the required volume of stock solution and taken into a 100 ml round bottom flask containing the maltodextrin carrier.

The additional solvent mixture was then added to form a slurry in the case of lower surfactant loading. The round bottom flask was then attached to a rotary flash evaporator (Superfit Rotavap-PBU-6D, Superfit continental Pvt. Ltd., Mumbai, India.) to evaporate solvent at 60 to 70 rpm, 45 ± 2 ºC temperature and 600 mmHg pressure until the formation of a dry, free-flowing product 15. The product formed is further dried in a vacuum desiccator at room temperature. These proniosomes were stored in a tightly closed container at refrigerator temperature until further use.

Preparation of Niosomes from Proniosomes: Proniosomes were transformed to niosomes by hydrating with hot water at 80 ºC and by gentle mixing. The niosomes were sonicated twice for 30 sec using sonicator and then subjected for further studies 16.

Fourier Transform Infrared Spectroscopy (FTIR) Spectroscopy: Infrared spectroscopy was performed to confirm the interactions between drug and excipients. FTIR spectra were obtained using an FTIR spectrometer (Alpha Bruker, Japan) by ATR technique. After cleaning of crystal area, the solid material was placed, the pressure arm was positioned, and the spectrum was recorded 17. Samples assessed encompassed pure Ofloxacin and physical mixture of Ofloxacin with maltodextrin carrier.

Angle of Repose: Flow property of proniosomes was studied by determining the angle of repose of the formulations by employing fixed funnel method. Ofloxacin proniosomes were weighed and passed through the funnel, which was fixed at a position so that the 13 mm outlet orifice of the funnel was 2 cm above a level black surface. The passed proniosomes formed a pile. The height ‘h’ and the radius ‘r’ of the pile were measured, and the angle of repose (θ) was determined by using the formula ‘tan θ = h / r 18.

Scanning Electron Microscopy (SEM): Proniosomes were sprinkled on to the double-sided tape affixed on the aluminum stub. The aluminum stub was placed in the vacuum chamber of the scanning electron microscope (JEOL-JSM 6380LA, Tokyo, Japan). The samples were observed for morphological characterization using a gaseous secondary electron detector 19.

Transmission Electron Microscopy (TEM): Transmission electron microscopy was used to determine the morphological characteristics of the selected niosomal formulation by using Transmission Electron Microscope (JEM-100S microscope; JOEL Ltd, Tokyo, Japan). One drop of the diluted solution of the formulation was placed on a carbon-coated copper grid, forms a fine liquid film and the film on the grid was negatively stained. The stained film was dried in air and observed under a transverse electron microscope, and photographs were taken 21.

Entrapment Efficiency: The amount of Ofloxacin entrapped in niosomes was estimated by the dialysis method. The prepared niosomes were placed in the dialysis bag (pre-soaked for 24 h). Free Ofloxacin was dialyzed for 30 min each time in 100 ml of phosphate buffer saline pH 7.4. The dialysis of free Ofloxacin always completed after 12-15 changes, when no drug was detectable in the recipient solution. The dialyzed Ofloxacin was determined by finding out the concentration of bulk of solution by UV spectrophotometer (V-630, Jasco-UV International Company Ltd., Japan.) at 295 nm. The samples from the bulk of solution diluted ten times before going for absorbance measurement. The free Ofloxacin in the bulk of solution gives us the total amount of un-entrapped drug. Encapsulation efficiency was calculated using the following formula 22,

In-vitro Drug Release and Kinetic Studies: In-vitro release studies were carried out using dialysis membrane employing in two sides open-ended cylinder. 1 ml of proniosomal suspension was placed uniformly in the dialysis membrane previously soaked overnight. The two sides open-ended cylinder was placed in the beaker containing 200 ml of phosphate buffer saline pH 7.4. Aliquots of 5 ml were withdrawn periodically and replaced with the same amount of phosphate buffer saline solution to maintain the sink condition. The samples were analyzed using UV spectrophotometer (Jasco-UV International Company Ltd, Japan.) at 295 nm. To describe the kinetics of the release process of the drug in the different formulations, zero order, first order, Higuchi and Korsmeyer and Peppas models were fitted to the dissolution data of selected formulation using linear regression analysis 23.

Fourier Transform Infrared Spectroscopy (FTIR) Spectroscopy: FTIR spectra of Ofloxacin and physical mixture of Ofloxacin with maltodextrin carrier is given in Fig. 1. The characteristic peaks of Ofloxacin show IR absorption at 1459, 1621, 1715, 1086 cm-1. All these peaks also have appeared in a physical mixture of the drug with maltodextrin carrier, which indicates no chemical interaction between Ofloxacin and the carrier, confirms the stability of the drug during the formulation. 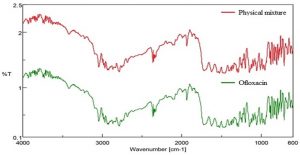 Angle of Repose: Angle of repose of proniosome formulations by fixed funnel method. The angle of repose for all the formulations was found to be in the range of 28.56º ± 0.34º to 30.12º ± 0.14º indicates the good flow property according to IP limits.

Scanning Electron Microscopy (SEM): Scanning electron microscopy was carried out to determine the surface morphology of the proniosomes. The SEM image Fig. 2 revealed the porous and smooth surface of formed pronoisomes. 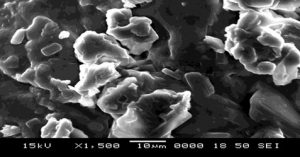 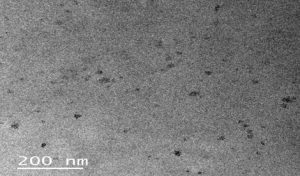 In-vitro Drug Release and Kinetic Studies: Most of the formulations were found to have a linear release and the formulations were found to provide approximately 60% - 90% release within a period of 12 h. Cholesterol, which has a property to abolish the gel to liquid transition of niosomes, this found to prevent the leakage of drug from the niosomal formulation. The slower release of drug from multilamellar vesicles may be attributed to the fact that multilamellar vesicles consist of several concentric spheres of bilayer separated by aqueous compartment. Formulations F6 and F7 showed sustained release of the drug. The formulations F3, F4, and F5 were found to give a cumulative release of 75.82%, 86.35%, and 76.92% respectively throughout 12 h.

Formulation F6 and F7 having the highest cholesterol content showed the slow release of 60.96 % and 54.62% respectively throughout 12 h. The results of in-vitro drug release studies of all the formulations depicted in Fig. 4. The zero order plots showed the zero order release characteristics of the formulation, which was confirmed by the correlation value which was found to be nearer to one. The correlation value of Higuchi’s plot revealed that the mechanism of drug release is diffusion. The in-vitro kinetic data subjected to log time log drug release trans-formation plot (Peppa’s model) revealed the fact that the drug release follows a super case II transport diffusion. 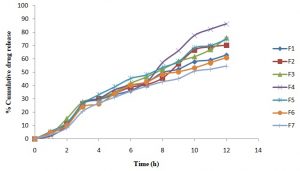 CONCLUSION: Proniosomes are promising drug carriers offers significant improvement in drug delivery by eliminating physical stability problems, such as aggregation or fusion of vesicles and leaking of entrapped drugs during long-term storage. Proniosomes shows similar release profile of conventional niosomes and offers better bioavailability of drug with poor solubility and site-specific, sustained delivery. The slurry method was found to be simple and suitable for laboratory scale. Hence, the slurry method was used to formulate proniosomes using maltodextrin as the carrier. By this study, we concluded that Ofloxacin could be successfully entrapped within the bilayer of the vesicles with high entrapment efficiency.

Proniosomes based niosomes formed from span 60 and cholesterol using maltodextrin as a carrier is a promising approach to sustain the drug release for an extended period.

ACKNOWLEDGEMENT: The authors are thankful to N. G. S. M. institute of pharmaceutical sciences, Nitte (Deemed to be University), Mangaluru for providing the necessary facilities to carry out this work. The authors dedicated this research work to our beloved Professor Late Dr. Prabhakara Prabhu (deceased on 26/11/2018) for his immense contribution to the research especially in the area of advanced drug delivery system.