DEVELOPMENT OF NOVEL CARBOHYDRATE BASED COMPOUNDS FOR BETTER ANTIPYRETIC ACTIVITY

DEVELOPMENT OF NOVEL CARBOHYDRATE BASED COMPOUNDS FOR BETTER ANTIPYRETIC ACTIVITY

ABSTRACT: Carbohydrate-based therapeutics are extremely potent, and many carbohydrate-based drugs are in the stage of preclinical or clinical trials. There is a growing interest in developing carbohydrate analogues for novel drug discovery as most of the recently used carbohydrate drugs display significant pharmacological activities and low toxicity. Also, the search for an antipyretic drug is a never-ending challenge. This research aimed at the development and synthesis of a series of amide-linked sugars (PV1-PV20) by coupling brominated sugars with varying amino acids coupled with nicotinic acid (GP1-GP10). Characterization of the derivatives synthesized was done by Infrared and Nuclear Magnetic Resonance Spectroscopy. These congeners were tested to analyze their antipyretic potential, and eight analogs out of twenty showed significant antipyretic activity. Thus, the carbohydrate-based amide derivatives show important action in obstruction and therapy of fever. Further work on these lines may play an important role in maintaining good health at a low cost.

INTRODUCTION: Oligosaccharides, carbohydrates and glycoconjugates are demanding ingredients for being alive. They intervene many crucial biological systems by cell-based complex operations which can trigger and assist life to percept developments required for disease related to autoimmune system, inflammation, and organ exclusion. The diversity of carbohydrate structures reflects that functional diversity. Natural and synthetic derivatives of carbohydrates have a good amount of therapeutic potential using them to treat various disorders 1.

Deep knowledge of biology of sugar chains and glycans is in demand nowadays for the effective approach for oligosaccharides and glycoconjugates 2, 3, 4. Selective acylation of monosaccharide derivatives is of growing importance in the field of carbohydrate chemistry because of its usefulness for providing newer derivatives of biological importance. These derivatives may have further synthetic utility as versatile intermediates in the synthesis of a much important class of drugs. Carbohydrates not only involved in the storage of energy but also act as an important ingredient in the exoskeleton. Besides this action, it has vital action in cellular interactions, tumor metastasis, pathogen recognition, and signaling of fertilization. Other biological potentials of carbohydrates are antioxidants, antineoplastics, anticoagulants, anti-viral and anti-inflammatory 5.

Another class is carbopeptoids which is amide linked oligosaccharides or amide-linked sugars 6, 7. In nature, carbohydrates establish an utmost lavish category of compounds. Carbohydrates have diversified structures and confer various properties in context with stereochemistry.

Recently, a paper described the easy and systematic preparation of new series of derivatives of carbohydrates with some modification and conjugation with berberine. The anti-diabetic and cytotoxicity measurements of all berberine derivatives were accomplished. Cytotoxicity of berberine was significantly reduced when modified with mannose. IC50 range of these congeners was around 1.5 more than the previous berberine. Other potential of these analogs was also seen as having increased antidiabetic effect with a broad range of doses, which can be further used as leads for drug development of new derivatives against diabetes 8.

In our study, a lipophilic molecule was taken as a lead compound. Various structural modifications were carried out in its general structure with a view to design more potent biologically active derivatives. We have tried to increase the biological activity of selected lipophilic molecule by attaching them with carbohydrates. Nicotinic acid amide is highly lipophilic in nature.

Hydrophilicity of this molecule is increased by attaching of the glycosidic moiety to it. This type of effect changes the properties that are related to pharmacokinetics (like distribution, excretion and drug concentration in body fluid) of the individual analogs. Change in hydrophilicity has a major effect on the transport of derivatives through the membranes. Solubility of the compounds in the constituents of the membrane is responsible for the entrance of them into cells 9, 10. Although a number of derivatives have already been formed, there is still a large scope to modify its structure for enhancement of biological activity.

Synthesis of Final Compounds: The amide (GP1-GP10) was reacted with brominated sugar in equal amount in the presence of HOBT, resulting into N-glycosides (AV1-AV20). The last step in the synthetic route was the de-protection of acetylated sugar by sodium methoxide and methanol 13, 14. The reaction was quenched with ion exchange resin IR-120H+ to produce the title compound (PV1-PV20). All the products and intermediates were obtained in good yield except few ones. The resulting com-pounds were subjected to column chromatography or recrystallization for purification. Final compounds were confirmed through the TLC, IR, and NMR spectroscopy Fig. 2. 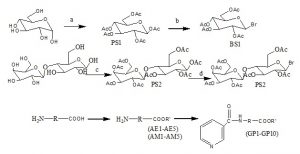 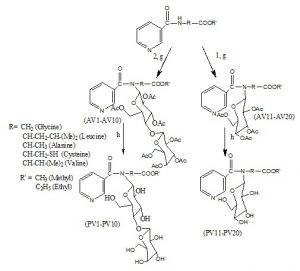 Antipyretic Activity of Synthesized Compounds: In the present study wistar rats (150-200 g) of any sex was taken for the process of activity test. These rats were purchased and securely got hold of from DFSAH, CCS HAU, Hisar, India. For the procedure of the experiment, prior permission was taken from Institutional Animal Ethics Committee having No-LSCP/2018/874 dated 08-05-2018. All the animals were kept in close and healthy supervision, which is given in CPCSEA guidelines, Ministry of Forests & Environment, Govt. of India. Food and water were timely provided to the animals as per the diet mentioned in CPCSEA. Animals were given 12 h of light treatment and then 12 h of dark treatment and then were accommodated for five days in conditions required for the experiment.

The yeast-induced pyrexia model was used for evaluating the potential of synthesized compounds on fever. Experimentation was started by inducing pyrexia by giving 10mL/kg of 15 percent suspension of Brewer’s yeast in 0.9% saline subcutaneously in the back underneath the backside of the neck. The area where the injection is to do is rub-down to escalate suspension under the skin.

After yeast was introduced in the body, food was instantly evacuated. After 18 h, temperature was noticed which was again done after 30 min. The animals received the test compound (200mg/kg) by oral administration 15. In this study, paracetamol was taken as a standard drug. The protocol is:

Group 1- marked as control and given saline 1mL/100g body weight of animals.

Analysis by Statistical Methods: Demonstration of values was done as mean ± SEM. Dunnett t-test was performed for all recorded values in analysis data, and statistical significance was p < 0.05 for tests.

RESULTS AND DISCUSSION: All the products and intermediates were obtained in good yield except few ones. The resulting compounds were subjected to column chromatography for purification. Final compounds were confirmed through the TLC and spectral analysis. These compounds were assigned IUPAC names after analysis of IR and NMR spectroscopic data followed by their evaluation for pharmacological activity.

Chemistry: All melting points of synthesized compounds were measured on a Buchi melting point apparatus. Structure, IUPAC names, melting point range, yield, and molecular weight of the title compounds are shown in Table 1.

The structures of the compounds were established through the interpretation of spectral data. Infrared transmissions, νmax in cm-1, were recorded in KBr pellet/Neat on Bruker spectrophotometer. The 1H- NMR spectra were recorded in deuterated solvents with Me4Si as the internal standard on Bruker NMR spectrometer operating at 300 MHz. The chemical shifts were recorded in ppm (δ) & coupling constants (J) in Hz. The solvent system used in the TLC was ethyl acetate: pet. ether: 6: 4. The TLC, FTIR, 1H NMR data of the title compounds are shown in Table 2.

Antipyretic Activity: The yeast-induced pyrexia model was used for evaluating antipyretic activity. In this study, yeast significantly increased the temperature of rats. Treatment with test compounds significantly prevented the increase in temperature in rats Table 3.

The compounds do not show any significant effect at 2 h, but the effect was significantly seen after 4 h. Experimental groups were compared with 0 h of the same group, and there was a decrease in pyrexia in rats. Pretreatment was done with thirty test compounds; twelve showed (GP1, GP2, GP9, GP10, PV1, PV2, PV9, PV10, PV11, PV12, PV19, PV20) significantly (p<0.05) preventive effect Table 3, 4. The biological activity comparison between the amide derivatives and N-glycosides indicated that a slight increase in antipyretic activity was observed in N-glycosides when compared to amide derivatives. The graph of the effect of the test (N-glycosides) compounds on induction of yeast-induced pyrexia in rats after 2 h and4 h are shown in Fig. 3 and 4, respectively. 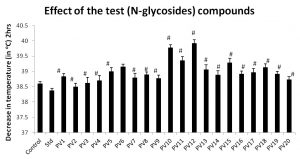 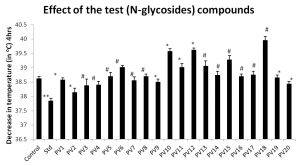 TABLE 3: EFFECT OF THE TEST (AMIDE DERIVATIVES) AND STANDARD COMPOUNDS ON INDUCTION OF YEAST INDUCE PYREXIA IN RATS

Paracetamol was used as standard drug. Values were expressed as Mean ± SEM,*p < 0.05 in comparison to control (n=6)

TABLE 4: EFFECT OF THE TEST (N-GLYCOSIDES) COMPOUNDS ON INDUCTION OF YEAST INDUCED PYREXIA IN RATS

Paracetamol was used as a standard drug. Values were expressed as Mean ± SEM,*p < 0.05 in comparison to control (n=6)

CONCLUSION: A series of 20 amide-based carbohydrates were successfully synthesized. Among the synthesized compounds, eight out of twenty compounds viz., PV1, PV2, PV9, PV10, PV11, PV12, PV19, PV20 were found to be more active. These compounds can play a significant role in the treatment of fever.

ACKNOWLEDGEMENT: The authors are thankful to the management of Lord Shiva College of Pharmacy, Sirsa, for providing the necessary facilities to carry out the research work.