ABSTRACT: The present investigation was carried out to study the disintegrant property of Plantago ovata and Ocimum basilicum mucilages. The objective of the work was to develop Fast disintegrating tablets of Ondansetron HCl with a view to enhance patient compliances and dissolution rate by direct compression method using 3² full factorial design. Plantago ovata (2-10% w/w), Ocimum basilicum (4-8%w/w) mucilages were used as natural superdisintegrant and microcrystalline cellulose was used as diluent, along with directly compressible mannitol to enhance mouth feel. The tablets were evaluated for hardness, friability, thickness, drug content uniformity, in vitro dispersion time, wetting time and water absorption ratio. Based on in vitro dispersion time (approximately 11 s); the formulation containing 10% w/w Plantago ovata and 8% Ocimum basilicum mucilages  were found to be promising and tested for in vitro drug release pattern (in 0.1 N HCl), short-term stability (at 40º/75 % RH for 6 mo) and drug-excipient interaction. Surface response plots are presented to graphically represent the effect of independent variables (concentrations of Plantago ovata and Ocimum basilicum mucilages) on the in vitro dispersion time. The validity of the generated mathematical model was tested by preparing two extra-design check point formulations. The optimized tablet formulation was compared with conventional commercial tablet formulation for drug release profiles. This formulation showed two-fold faster drug release (t50% 3.6 min) compared to the conventional commercial tablet formulation (t50% 7 min). Short-term stability studies on the formulation indicated that there are no significant changes in drug content and in vitro dispersion time (p < 0.05).

Natural mucilages are preferred over semi-synthetic and synthetic materials due to their non-toxic, low cost, free availability, emollient and non-irritating nature 5-6.

Ondansetron HCl is a potent highly selective antagonist at the 5 HT3. It is a carbazole which causes anti nauseant and anti emetic effects by selective and comperative blockade of the 5 HT3 receptors 10. The aim was to develop Ondansetron HCl fast disintegrating tablets using 32 full factorial design with enhanced bioavailability.

Isolation of mucilage: For the isolation of mucilage 11, seeds of Plantago ovata were used. They were soaked in distilled water for 48 hours and then boiled for 1 hr for complete release of mucilage into water. The material collected was squeezed through muslin cloth for filtering and separating out the marc. Then, an equal volume of acetone was added to the filtrate so as to precipitate the mucilage. The separated mucilage was dried (in oven at temperature less than 600 C), powdered, sieved (#60) and stored in a desiccator until further use.

Isolation of Ocimum basilicum Mucilage: Basil seeds were rinsed with water to remove foreign particles. Seeds were soaked in water (seed: water= 1:10) for 20 minutes. The swollen seeds subjected to high agitation using homogenizer at 1500 rpm to separate gel layer from seeds 12. The separated gel layer was passed through muslin cloth to remove unwanted particles and then precipitated using acetone. The precipitate was washed with ethanol and dried in hot air oven at 400C. The dried mucilage was powdered and stored in airtight container.

Preparation of Fast disintegrating tablets of Ondansetron HCl by direct compression method:  Fast disintegrating tablets of Ondansetron HCl were prepared by direct compression method 13. According to the formulae given in Table 1. All the ingredients were passed through #60 mesh separately. The drug and MCC were mixed by taking small portion of both each time and blending it to get a uniform mixture and kept aside. Then the other ingredients were weighed and mixed in geometrical order and tablets were compressed using 6 mm round flat punches to get tablets of 100 mg weight on a 10-station rotary tablet machine (Clit, Ahmedabad).

Formulation ODF9 was selected as the best and used in further studies;

Hardness: The crushing strength of tablets was measured by using Monsanto hardness tester 14.

Friability test: The friability of tablets was measured in Roche friabilator 16. Twenty tablets were dedusted at 25 rpm for 4 min and weighed again. Percentage friability was calculated from loss in weight as given in equation below. The weight loss should not be more than 1% (Table 2).

*Average of three determinations. Weight variation (95-105 mg) within the IP limits of ±10%

In vitro dissolution test: In vitro dissolution studies of the optimized fast disintegrating tablets of Ondansetron HCl and commercial conventional tablet was performed according to USP XXIII Type-II dissolution apparatus (Electrolab, model TDT-06N) employing a paddle stirrer at 50 rpm using 900 ml of 0.1 N HCl at 37±0.5ºC as dissolution medium 21. One tablet was used in each basket. Aliquotes of the dissolution medium (5 ml) were withdrawn at specific time intervals (2, 4, 6, 8, 10 and 12 min) and replaced with the equal volume of fresh medium. The samples were analyzed for drug content by measuring the absorbance at 249 nm. Drug concentration was calculated from the standard calibration curve and states cumulative percent drug dissolved.

Stability testing: Accelerated stability studies on formulation ODF9 were carried out by storing 15 tablets in an amber coloured rubber stoppered vials at 40o/75% RH over a period of 6 months.

where, Y is the dependent variable, b0 is the arithmetic mean response of the nine runs and b1 (b1,b2,,b12,b11 and b22) is the estimated coefficient for corresponding factor X1 (X1,X2,X12,X11,and X22), which represents the average results of changing one factor at a time from its low to high value. The interaction term (X1X2) describes the changes in the response when two factors are simultaneously changed. The polynomial terms (X12 and X22) are included to investigate nonlinearity.

RESULTS AND DISCUSSION: Fast disintegrating tablets of Ondansetron HCl were prepared by direct compression method using Plantago ovata and Ocimum basilicum mucilages were natural superdisintigrants and MCC as diluent along with directly compressible mannitol (Pearlitol SD 200), which was used to enhance the mouth feel. A total of nine formulations, a control formulation (ODF0, without superdisintegrant) and two extra-design check point formulations (C1 and C2 to check validity of the developed polynomial equation), were designed.

The tablets were evaluated for weight variation, uniformity of drug content, hardness, friability, in vitro dispersion time, in vitro dissolution studies, tablets obtained were of uniform weight (due to uniform die fill), with acceptable variation as per IP specifications (±10%). Drug content was found to be in the range of 95-105%, which is within acceptable limits. Hardness of the tablets was found to be 4.0 to 4.5 kg/cm². Friability below 1% was an indication of good mechanical resistance of the tablets. Formulation ODF9 was found to be promising and shown an in vitro dispersion time of 11 s, which facilitates faster dispersion in the mouth.

In order to investigate the factors systematically, a factorial design was employed in the present investigation. Formulation has been done by using 3² full factorial design, preparing nine batches of formulations (ODF1 to ODF9). 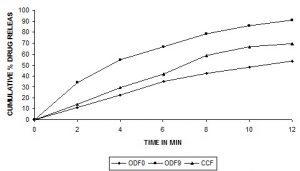 IR studies indicated that the drug is compatible with all the excipients. The IR spectrum of ODF9 shown all the characteristic peaks of Ondansetron HCl, thus confirming that no interaction of drug with the components of the formulation. Short-term stability studies of the above formulation indicated that there are no significant changes in drug content and in vitro dispersion time at the end of 6 months  period (P<0.05). 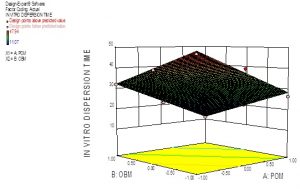 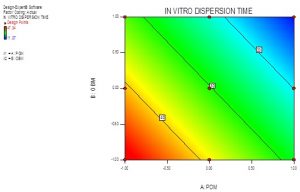 CONCLUSION: A 3² full factorial design revealed that the amounts of Plantago ovata mucilage (X1) and Ocimum basilicum mucilage (X2) significantly affect the dependent variable (Y1), the in vitro dispersion time. It is thus concluded that, by adopting a systematic formulation approach, an optimum point can be reached in the shortest time with minimum efforts. Direct compression method by using natural superdisintegrants would be an effective approach compared with the use of more expensive excipients in the formulation of fast disintegrating tablets with smaller disintegration time, improved drug dissolution, patient compliance, convenience and acceptability.