ABSTRACT: Osmotic tablets have emerged as a new technology for the delivery of drugs whose release rate is to be controlled. These tablets offer controlled drug release with the help of certain osmogens and also provide zero-order rate kinetics. In the present study, we have developed an osmotic tablet of Metformin Hydrochloride (HCL) to enhance its oral bioavailability. Metformin HCL is a biguanide derivative often used as an anti-hyperglycemic agent. The tablets were prepared using the wet granulation technique. The prepared formulations were characterized and optimized on the basis of various physicochemical properties, and F5 was selected as best. The in vitro drug release study demonstrated that the drug release depends upon the concentration of different polymers, including hydroxyl propyl methylcellulose (HPMC) and Poly ox N80 (polyethylene oxide). A higher concentration of HPMC and Poly ox N80 results in drug release for extended duration. The optimized formulation developed with a 3:1 ratio of both the polymers HPMC E5 and Poly ox N80 have shown nearly 86% of drug release. Osmotic tablets hold promising potential for increasing drug efficacy and reducing dosing frequency with minimal side effects. It also provides an economical means of developing controlled release dosage forms.

INTRODUCTION: Drug release from novel drug delivery systems offers controlled release of drug at the target site for better therapeutic action. Unlike conventional therapies, it provides the advantage of predictable plasma concentrations and target it to the desired site of action and thereby reducing the dose, dosing frequency, toxic adverse effects, and blood level fluctuations.

Osmotically controlled systems are proved as one of the most promising novels approaches for oral delivery of therapeutics in recent times. In such a system, the triggering factor is osmosis responsible for controlling the drug release from the polymer matrix or osmotically controlled devices 2. OROS system provides a uniform release rate of drug and improved concentration at the site of absorption. Drug release from OROS systems is independent of pH and other physiological factors. However, it is possible to modify the release characteristics by optimizing the properties of drugs and system 3.

In OROS, osmotic pressure provides the driving force to generate the controlled release of the drug. In this system, a tablet containing a core of drug is surrounded by a Semipermeable membrane, which is permeable to water and other small molecules but not to drug. When this device is exposed to water or any body fluid, water and fluid will flow inside the tablet due to the osmotic pressure gradient and result in the formation of a saturated aqueous solution of drugs inside the device. The increased hydrostatic pressure inside the device triggers the outward movement of saturated drug solution through a small orifice of the system at a constant rate until isotonicity is attained. This system contains the drug in solution in an impermeable membrane within the device 4. Met formin is used as first-line therapy for diabetes mellitus or type II diabetes. Chemically it is a biguanides derivative with high solubility in water and aqueous fluids. The anti-hyperglycemic effect is achieved by diminishing the production and intestinal absorption of hepatic glucose. Additionally, it also enhances the peripheral utilization and uptake of glucose as well as increases insulin sensitivity 5. It is a very common and effective, and safe prescription drug for type II diabetes.

However, the higher dosing frequency due to the shorter half-life of the drug (0.9 to 2.6 h) and long-term treatment (as diabetes is a chronic disorder) is inconvenient to the patients and may result in some undesirable adverse effects 6. Thus, to resolve the limitations of immediate release conventional formulation, we have developed an osmotically controlled release system for oral administration of metformin HCl. The developed OROS system offers a controlled release of drugs with zero-order rate kinetics and supposed to extend the drug release and hence, minimize the dosing frequency.

Fortamet Extended-Release Tablet: In the USA market, Metformin OROS is available under the brand name Fortamet. Fortamet was developed as an extended-release formulation of metformin hydrochloride and designed for once-a-day oral administration using the patented single-composition osmotic technology (SCOTTM). The tablet is similar in appearance to other film-coated oral administered tablets, but it consists of an osmotically active core formulation surrounded by a semipermeable membrane. Two laser-drilled exit ports exist in the membrane, one on either side of tablet 7. The core formulation is composed primarily of drugs with small concentrations of excipients. The semipermeable membrane is permeable to water but not to higher molecular weight components of biological fluids 8. Upon ingestion, water is taken up through the membrane, which in turn dissolves the drug and excipients in the core formulation. Further, the dissolved drug and excipients exit through the laser-drilled ports in membrane 9.

The rate of drug delivery is constant and dependent upon the maintenance of a constant osmotic gradient across the membrane. This situation exists so long as there is an undissolved drug present in the core tablet. Following the dissolution of the core materials, the rate of drug delivery slowly decreases until the osmotic gradient across the membrane falls to zero, at which time delivery ceases 10. The membrane coating remains intact during the transit of the dosage form through the gastrointestinal tract and is excreted in the feces 11.

Determination of Wavelength of Metformin HCl: 10 ml of the above solution was diluted to 100ml with the same solvent to get 10 µg/ml of concentration. The UV spectrum of the final solution was scanned in the range of 200-400 nm against distilled water as blank. The λmax was found at 233.8 nm. 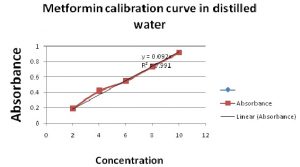 CR Layer: All the material was weighed accurately. The weighed quantity of metformin HCL was shifted through sieve no #20. Hydroxy Propyl Methyl Cellulose (HPMC) E5, Poly Ethylene Oxide (Poly ox N80) and sodium chloride were co-shifted through sieve no # 40. Then all the materials were collected in polybag and transferred into Rapid Mixer Granulator (RMG) followed by mixing for 15 min. Binder (Isopropyl Alcohol) was added slowly. Fast mixing was done after each addition for 1.40 sec. After that, the materials were removed from Rapid Mixer Granulator and dried in Fluid Bed Dryer (FBD) for 50 min at 28 °C until Loss on Drying (LOD) was found to be below 2.5% @ 105 °C (auto mode). After drying, materials were sifted through sieve no # 20 and lubrication of dried granules was done with magnesium stearate.

Binder (Isopropyl Alcohol) was added slowly. Rapid mixing was done after each addition for 1.50 sec. After that, the materials were removed from Rapid Mixer Granulator and dried in Fluid Bed Dryer (FBD) for 30 min until 28°Cuntil Loss On Drying (LOD) was found to be below 2.5% @ 105 °C (auto mode). After drying, materials were shifted through sieve no #20 and lubrication of dried granules was Done with magnesium stearate. Bi-layered tablets were prepared followed by CR coating by Cellulose Acetate and a pore former. Drilling was done manual by using manual drill machine. Composition of Push Layer was kept constant and impact of changes in CR layer was studies as shown in Table 1.

Angle of Repose: The angle of repose is defined as “the maximum angle possible between the surface of the pile of Powder and horizontal plane.” The angle of repose for the powder of each formulation was determined by the fixed funnel method. A funnel was kept vertically in a stand at a specified height above a paper placed on a horizontal surface. The funnel bottom is closed, and 10 gm of sample powder is filled in the funnel. Then funnel was opened to release the powder on the paper to form a smooth conical heap, is found by measuring in a different direction. The height of the heap was measured by using a scale. The value of angle of repose is calculated by using the following formula:

Moisture Content: LOD test is to measure the amount of water and volatile matters in the sample when the sample is dried under specific conditions. The quantity of moisture present in the API was determined by using a moisture analyzer and can be calculated as follows.

Bulk Density: The powder sample (blend) under test was screened through sieve # 20. Further, the sample equivalent to 20 gm was accurately weighed and filled in a 100 ml graduated cylinder. The powder sample was leveled, and the unsettled volume (V0) was noted. The bulk density was calculated in g/cm3 by the formula,

Where M = Mass of Powder Taken

Tapped Density: After carrying out the procedure as given in the Measurement of bulk density, the cylinder containing the sample was tapped using a suitable mechanical tapped density tester that provides 100 drops per min. The process was repeated until the difference between succeeding Measurement is less than 2% and then tapped volume, V measured, to the nearest graduated unit. The tapped density was calculated in gm. per L, using the formula:

Hausner’s Ratio: The Hausner's ratio was calculated by using measured values for bulk density and tapped density as follows:

In a variation of these methods, the rate of consolidation is sometimes measured rather than, or in addition to, the change in volume that occurs on tapping 12. For the compressibility index and the Hausner ratio, the generally accepted scale of flowability is given in Table 2.

TABLE 2: THE SCALE OF FLOWABILITY

TABLE 3: LIMIT ACCORDING TO USP

Thickness: The thickness of the tablet was determined using a Vernier Caliper. Six tablets from each batch of formulation were used, and mean thickness value and SD were calculated for each formulation.

DISCUSSION: Metformin HCl Osmotic tablet was prepared by wet granulation technique. Before moving to punch of tablet core, the dried granules were subjected to a pre-formulation study test in which angle of repose found to be in the range of tapped and bulk density also showed good flow properties. All coated tablets were subjected to various evaluation parameters like tablet weight variation, assay, hardness, friability, dissolution study, etc., which is shown in Table 4. All the tablets passed the weight variation test as all of than weighed within given pharmacopeial limits. The hardness of tablets ranged between 6-7 kg/cm2, which indicates good mechanical strength and ability to withstand physical pressure and stress. The friability was between 0.13 to 0.32 which is within limits and shows good resistance of tablets to mechanical stress. The percent drug content of tablets was within permissible limits, i.e., 98.12% to 99.12%. The drug release profile of all the osmotic tablets having a varied amount of polymer concentration indicated the drug release pattern.

From the drug release data, it was observed that formulation (F5) showed a better drug release (85.25%) as compared to other formulations Table 6. Hence, it can be concluded that osmotic tablets containing polymers Hydroxy Propyl Methyl Cellulose (HPMC) E5 and Poly Ethylene Oxide (Polyox N80) having a ratio (1:2) showed better release kinetics. It can also be concluded that using isopropyl alcohol in varying concentrations helped the osmotic tablet to get cohered easily.

CONCLUSION: The present work was carried out to develop an osmotic tablet of Metformin HCl for prolonged delivery of the drug in a controlled manner and zero-order release. The difficulties of laser drilling and micro-drilling were removed by using pore former in coating solution resulting in cost reduction and complications. Through the in-vitro release study, it can be concluded that the prepared osmotic tablet releases drug at an optimum level up to 12 h, also controlled and zero-order release was obtained. The prepared osmotic tablet will not only sustain the drug action but can also limit the plasma –drug concentration fluctuations, which is necessary for treating hyperglycemia. In the upcoming technology for drug delivery, these osmotic tablets assure to be cost-effective and reliable for patient use.

ACKNOWLEDGEMENT: We are thankful to Medley Research Centre Mumbai and Rungta College of Pharmaceutical Sciences and Research, Bhilai, for providing the necessary facilities to carry out the research work.