ABSTRACT: The aim of the present study was to formulate an osmotically controlled drug delivery system (O-CDDS) of Metformin hydrochloride to reduce the frequency of multiple dosing in non-insulin dependent diabetes mellitus-II which is a lifelong disease. Metformin hydrochloride a BCS Class-III drug having a poor biological half-life of 6 h. O-CDDS of Metformin hydrochloride is a recent approach for the zero-order release profile. Different factors X1 (effect of percentage of plasticizer), X2 (effect of percentage of release modifier), X3 (effect of percentage of coating) were optimized using central composite design. The granules were prepared by wet granulation technique using PVP K90 as a binding agent. Evaluations of granules like bulk density, tapped density, Hausner's ratio, carr’s compressibility index, angle of repose was done. Then core tablets were prepared using 16 station tablet press and evaluated for hardness, friability, weight variation. For the preparation of a semi-permeable membrane, the coating of cellulose acetate using polyethylene glycol 400 as a plasticizer was done. Then drilling was done mechanically to create the delivery orifice. Finally, the dissolution was performed and formulation (F-4) was found the best which delivered the drug at zero order. The dissolution data of F-4 was compared with the marketed formulation. This study demonstrated the zero-order release which is independent of pH and hydrodynamics of dissolution.

INTRODUCTION: Diabetes is a lifelong disease and more than 60 million peoples in India are affected by diabetes mellitus (DM)-II nowadays according to the current status. For the treatment of lifelong diseases like diabetes, rheumatoid arthritis, hypertension, etc. there is a need for controlled release formulation in which oral route is mostly preferred. Oral drug delivery is the most preferred and convenient route for the administration of therapeutic agents or drugs for systemic action.

This route is preferred over other routes because it provides improved therapeutic advantages, such as ease of administration, patient compliance, cost-effectiveness and flexibility in formulations. Osmotic pumps are the most promising systems for controlled drug delivery. These systems are used for both oral administration and implantation. The elementary osmotic pump is developed for the present study.

Metformin Hydrochloride is an antidiabetic drug of BCS Class-III which is having high solubility. It belongs to the biguanide class of ant diabetics 1, 3. It is on the World Health Organization's List of essential medicines, the most effective and safe medicines needed in a health system. Chemically it is 1, 1-Dimethyl biguanide hydrochloride. The biological half-life of the drug is approx 6 h, so there is a need for the preparation of extended-release dosage form of the drug to reduce the frequency of dosing. There are many approaches for controlling the release like gastro-retentive tablets, floating tablets etc. Out of these O-CDDS is a recent approach for the formulation of an extended-release dosage form which can provide a zero-order release profile independent of pH and hydrodynamics of dissolution 4.

In the present study core tablets of Metformin Hydrochloride were prepared using PVP K90 as a binder by wet granulation and then these tablets were coated with cellulose acetate 398-10 using PEG-400 as a plasticizer in different ratios for the optimization using central composite design.

This design suggested eight formulations. Some factors were eliminated and some were selected for the further, optimization of the formulation by central composite design.

Application of Central Composite Design: On the basis of results of screening design, central composite design was applied for the optimization of factors selected by screening design which are X1 {effect of percentage of plasticizer (10, 15, 20 %)}, X2 {effect of release modifier polymer HPMC K4M CR}, X3 {effect of coating percentage (3, 4, 5%)}.

In statistics, central composite design (CCD) is an experimental design, useful in response surface methodology, for building a second-order (quadratic) model for the response variable without needing to use a complete three-level factorial experiment. The composition of different batches of core tablets and coating is shown in Table 1.

Formulation and Evaluation of Granules of Metformin Hydrochloride: Because of poor compressibility of the API, wet granulation was performed using PVP K-90 as a binder in a rapid mixer granulator (R. M. G). Then obtained granules were dried in fluidized bed dryer (FB dryer) for an appropriate time (10-15 min) and these dried granules were then passed through the 25 # ASTM sieve to obtain uniform granules.

Coating of the Core Tablets: Coating is one of the important steps in the formulation of osmotic pumps. So the coating should be done very carefully. Core tablets were coated with cellulose acetate by taking a concentration of 2% solid content with different plasticizer ratios in solvents.

The coated tablets were dried to remove the residual solvent. The coating was done using gansons coater at bed temperature of 20-30 °C, pan speed of 15-18 rpm, spray rate of 8-10 gm/ml. The time of drying after the coating was 30-40 min.

Creation of Delivery Orifice: Delivery orifices in each tablet were created using a mechanical drill prior to in-vitro dissolution.

The creation of delivery orifice is also an important step by which the release rate is to be decided that which diameter of the orifice is required to give the proper release rate 5.

In-vitro Dissolution: USP-I basket type dissolution apparatus was used for in-vitro dissolution. Phosphate buffer of pH 6.8 at 37 °C ± 0.5 °C was used as dissolution media. Speed was kept 100 rpm and the volume of media used was 900 ml.

As soon as the temperature of dissolution media meets the target, the tablets were set into the 10 # mesh basket and dissolution was started. Samples were obtained after 2 h, 4 h, 6 h, 8 h, 10 h, and 12 h. An equivalent volume of fresh media was replaced after the collection of each sample to maintain constant dissolution volume and samples were analyzed by UV spectrophotometer at 233 nm 7, 8.

Application of Screening Design: Applied screening design was used for the selection of major factors that were described earlier. The selection of excipients and ratio was done according to this design. On the basis of in-vitro dissolution results as shown in Table 2 of screening design following factors were studied using central composite design with the following range for optimization of the formulation.

DBS as plasticizer: Because it made the release very slow which we don’t require.

% Water: Because of poor film appearance and very low impact on release.

No. of Orifice: Because as compared to 2 orifice 1 orifice made the release more slow at 2 h.

Application of Central Composite Design: Central composite design was used for the preparation of a robust formulation by using different ranges of plasticizer and coating.

Formulation and Evaluation of Core Tablets: Prepared tablets were evaluated and evaluation parameters were finding within their acceptance range. Evaluation of core tablets gave the idea about the strength, appearance, weight variation.

NaCl: Because as compared to without NaCl formulation there is very low impact i.e.  Release is only enhanced for first-time point 2 h. etc. Evaluation data of tablets of central composite design is shown in Table 3.

Coating of the Core Tablets: Coating of the core tablets was done using gansons coater. One of the important things for the coating of the O-CDDS is how to avoid spray drying in case of volatile solvents of the coating solution for the preparation of a transparent film. If the spray drying occurred there are many chances of the formation of the hazy film. For the preparation of the transparent film, the important thing is the bed to the gun distance which should be closer (4-6 cm) to bed in case of volatile solvents like acetone, isopropyl alcohol (IPA) etc.

In-vitro Dissolution: In-vitro dissolution was performed for the prepared O-CDDS and the percentage release of the drug gave the idea for the selection of factors that were taken for the optimization using central composite design.

A prediction profiler and a contour profiler were obtained which are given in Fig. 1 and Fig. 2 respectively. The white space given in the contour profiler is the space in which the dissolution data will remain always as targeted. The P-value of less than 0.05 indicates that the model terms are significant. The values of the lack of fit model observed are given in Table 5. 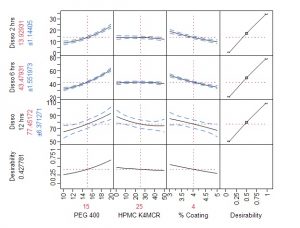 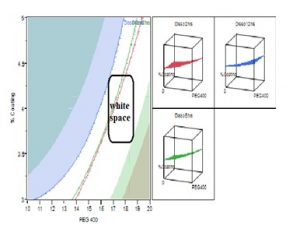 Comparison of Analytical Data with Marketed SR Tablets: Analytical data of prepared O-CDDS batch (F-4) was found linear as compared to the marketed SR tablets of Metformin hydrochloride. The comparison data is given in Fig. 3. 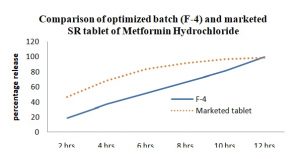 Taking the Images of Delivery Orifice: Images of delivery orifice were taken using the polarizing optical microscope attached with the canon camera and the images were saved in the attached computer. The images are given in Fig. 4. 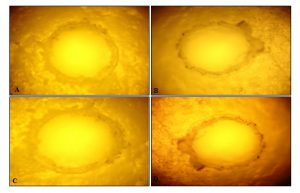 The elementary osmotic pump of Metformin hydrochloride was made in the present study. On the basis of the experiments done during the screening design, it is concluded that hydrophobic plasticizer made the release very slow and 1 orifice was not successful for the prepared O-CDDS. Also, there was no use of osmogen in the prepared O-CDDS. So on the basis of screening design, the above factors were eliminated and further study was done using central composite design.

The marketed tablets have poor control over the release of the drug as compared to O-CDDS. Thus, O-CDDS is a good way to avoid the multiple dosing and for the preparation of a controlled release tablet of Metformin hydrochloride which will give the therapeutic effect for the whole day.

ACKNOWLEDGEMENT: The authors are thankful to Sun Pharmaceutical Industries Ltd., Gurugram for providing API, excipients, all the required instruments and facilities for carrying out the whole study

CONFLICTS OF INTEREST: The authors confirm that this research article content has no conflicts of interest.