DEVELOPMENT OF QUALITY CONTROL PARAMETERS FOR THE STANDARDIZATION OF AEGLE MARMELOS (ROXB.) SEED

DEVELOPMENT OF QUALITY CONTROL PARAMETERS FOR THE STANDARDIZATION OF AEGLE MARMELOS (ROXB.) SEED

ABSTRACT: The present investigation was undertaken to determine the requisite pharmacognostic standards for evaluating the plant material. The macroscopic, microscopic, powder study, physicochemical, qualitative phytochemical and florescence analysis of the seed were carried out. The microscopic study showed abundant large parenchymatous cells with aleurone grains, calcium oxalate crystals, lignified trichomes, endocarp and testa throughout the section. The powder microscopy showed the presence of lignified trichomes, rossete crystals of calcium oxalates, oil granules, etc. The physicochemical properties such as total ash, water soluble ash, acid insoluble ash and sulphated ash were 5.75%, 5.16%, 0.16% and 6.66% respectively. The aqueous soluble and ethyl acetate soluble extractive values were 34.07% and 16.66% respectively. The qualitative phytochemical analysis showed the presence of maximum amount of flavonoids followed by triterpenes, steroids and alkaloids respectively. The seed powder showed characteristic flourescence with various chemical reagents. The data generated in the present work could be used as reference for the standardization and quality control of A. marmelos seed. It will help in identifying and preventing intentional or unintentional adulteration of this plant material.

INTRODUCTION: Aegle marmelos (Roxb.) belongs to the family Rutaceae. This family consists of 162 genera and 1650 species distributed all over the world. In India, 23 genera with 70 species are reported. Aegle marmelos is used in indigestion, constipation diarrhea, dysentery, diarrhea, skin disorders leucorrhea, menstrual irregularities etc. The plant is commercially utilized as a bilvachurna.

The use of herbal drugs as medicine is the ancient form of healthcare and it is used in all cultures throughout history. Ancient humans are well known their dependence on nature for a good healthy life and since that time humankind depended on variety of plant resources for food, shelter, clothing and medicine to cure immensurable  diseases. However, a common problem with herbal medicine or herbal drugs is adulteration. Adulteration, in a broad and legal sense, is the debasement of any article, which involves conditions such as inferiority, spoilage, deterioration, admixture, sophistication, and substitution. Adulterating the crude drugs by any of the said conditions is considered undesirable in the drug industry.

There are many reasons of adulteration. Some examples are as follows: Confusion in vernacular names e.g. Casuarina equisetifolia for Tamarix indica and Aerva lanata for Berginia ciliate; Lack of knowledge about authentic source e.g. Mesua ferrea is adulterated with flowers of Calophyllum inophyllum; Similarity in morphology e.g. Mucuna pruriens is adulterated with M. utilis and M. deeringiana. To prevent all such incidences, standardization of medicinal plants is of utmost importance. The most easy, simplest and authentic way is to do pharmacognostic studies. Various parameters involved are shown in Fig. 1. Pharmacognostic study has been done in various other plants as reported by other researchers 10 - 13. 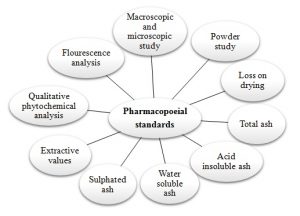 Considering the above, in the present work, A. marmelos seed was subjected to various pharmacognostic studies.  It involved evaluation of organoleptic, macroscopic, microscopic and powder study; physicochemical, phytochemical and fluorescence analysis was also done.

Plant Collection and Extraction: The seeds of Aegle marmelos (Roxb). were collected  in August, 2016 from Rajkot, Gujarat, India. The plant was compared with voucher specimen (Voucher specimen number PSN104) deposited at Department of Biosciences, Saurashtra University, Rajkot, Gujarat, India. The seeds were separated from fruit, washed thoroughly with tap water, shade dried and homogenized to fine powder and stored in closed container for further studies. For physicochemical studies, 10 g of dried powder of seeds was extracted in solvents of different polarities (petroleum ether, toluene, ethyl acetate, methanol and water) by cold percolation method. The solvent was evaporated to dryness and dried crude extracts were stored in air tight bottles at 4ºC. Macroscopic and microscopic characters were studied by standard methods. Photographs at different magnifications were taken by using digital camera.

Microscopic Studies: Microscopic studies were carried out by preparing thin sections of seed. The thin sections were further washed with water, stained with congo red, malachite green and mounted in glycerine for observation and confirm its lignifications (10x, 40x). The powder microscopic studies were also carried out and the specific diagnostic characteristic features were recorded 15.

Physicochemical Analysis: The physicochemical parameters like loss on drying, total ash, acid-insoluble ash, water-soluble ash, sulphated ash and extractive values were determined as per WHO guidelines in dry powder of A. marmelos seeds 16-17. The procedure followed is as described earlier.

Determination of Loss on Drying: Two grams of crude powder of A. marmelos seeds were taken in a silica crucible and then dried in an oven at 105 ºC - 100 ºC till constant weight was obtained. The weight after drying was noted and loss on drying was calculated. The percentage was calculated on the basis of sample taken initially 16.

Determination of Total Ash: Two grams of dried powder of seed were taken in a silica crucible and was put in Muffle furnance at 500 ºC for 5 h. It was allowed to cool and then weighed. It was white in colour indicating the absence of carbon. Total ash value was calculated as mg/g of dried material 18.

Determination of Acid Insoluble Ash: 25 ml of hydrochloric acid (70 g/L) was added to the crucible containing total ash. It was covered with a watch-glass and heated gently for 5 min to boil. The watch-glass was rinsed with 5 ml of hot water and this liquid was added to the crucible. The insoluble matter was collected on an ashless filter paper and it was washed with hot water until the filter was neutral. The filter paper containing the insoluble matter was transferred to the original crucible; then it was put in Muffle furnance at 500ºC for 2 h. It was allowed to cool and then weighed. Acid insoluble ash was calculated as mg/g of air dried material 18.

Determination of Water Soluble Ash: To the crucible containing the total ash, 25 ml of water was added and boiled for 5 min. The insoluble matter was collected on an ash less filter paper. It was washed with hot water and heated in a crucible for 15 min. Weight of insoluble matter was subtracted from the weight of total ash. The content of water soluble ash was calculated as mg/g of air dried material 18.

Determination of Sulphated Ash: Two grams of crude powder of A. marmelos seeds were taken in a silica crucible and 2 ml 0.1N H2SO4 was added and incubated at room temp for 10 min, then it was put in Muffle furnance at 500 ºC for 5 h. It was allowed to cool and then weighed. The content of sulphated ash was calculated as mg/g of air dried material 17.

Qualitative Phytochemical Analysis: Qualitative analysis for the detection of phytoconstituents in the powdered seeds was carried out following the procedure of Harborne 19. The details of the procedure followed is as described earlier 20. Alkaloids were detected by using three reagents viz. Dragondroff’s reagent, Mayer’s reagent and Wagner’s reagent separately. The tests were scored positive on the basis of orange precipitate, creamish precipitates and brown precipitate respectively. Flavonoids were detected by alkaline reagent test. The crude powder of seeds was treated with a few drops of diluted sodium hydroxide. Formation of intense yellow colour which turned colourless on addition of few drops of diluted HCl indicated the presence of flavonoids.

Fluorescence Analysis: Fluorescence study of crude powder of seeds was performed as per Chase and Pratt 21. A small quantity of the dry powder of seeds was placed on grease free clean microscopic slide and 1 - 2 drops of freshly prepared reagent solution were added, mixed by gentle tilting of the slide and waited for a few minutes. Then the slide was placed inside the UV chamber and observed in visible light, short (254 nm) and long (365 nm) ultra violet radiations. The colours observed by application of different reagents in different radiations were recorded.

Seed: The macroscopic study showed that the shape of the seed was sub globular, with 0.5 - 1 cm long and 0.5 - 1 cm wide and the helium was raised type. The seed was creamiest white in colour with aromatic odour and taste. The seed was extremely hard and silky hair radially arranged on the surface.  Many dense appressed unicellular lignified covering trichomes were also present on the upper surface of seed Fig. 2.

FIG. 2: MACROSCOPIC CHARACTERISTICS OF A. MARMELOS

Seed: The transverse section of A. marmelos seed is shown in Fig. 3.  The seed was divided into two parts testa and endocarp Fig. 3a. The endocarpic cells consisted of oil globules Fig. 3b. The longitudinal section of seed endocarp contained thick walled cellulosic parenchymatous cells Fig. 3c and plasmodesma was in between the walls of endocarpic cells Fig. 3d. The endocarp consisted of aleurone grains and parenchymatous cells with rosette crystal of calcium oxalate Fig. 3e. The upper part of testa was single layered epidermis covered with lignified trichomes and oblique linear pits with large thick walled cells Fig. 3f. 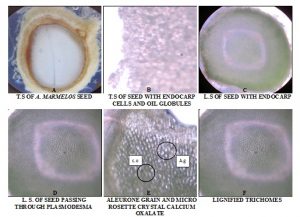 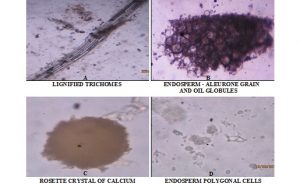 Qualitative Phytochemical Analysis: The qualitative phytochemical screening of the crude powder of A. marmelos seed is given in Table 3. In the seed flavonoids were present in maximum amount followed by triterpenes and steroids. Other phytoconstituent were present in trace amount and anthocyanins and phlobatanins were absent.

DISCUSSION: Pharmacognosy is the scientific study of crude drugs from natural sources. The standardization is a very important step in establishing the correct identity, purity, safety and quality of crude drugs and it should be established before it can be successfully included in pharmacopoeia 22. Recently, there has been an emphasis in standardization of medicinal plants of therapeutic potential. In spite of modern techniques, pharmacognostical evaluation is still more reliable for identification and evaluation of plants. World Health Organisation recommends that the macroscopic and microscopic evaluation is most important in establishing the identity and purity of the plants 22.

In the present study, pharmacognostic standardization of seeds of A. marmelos was done which included morphological, microscopic, physicochemical, phytochemical and fluorescence analysis. This evaluation provides the simplest, quickest and cheapest means to establish the identity and purity of drug and also acts as a reliable tool for detecting adulteration.

Adulteration of the original plant material is the main cause of dilapidation of original therapeutic effect of plants used in traditional systems of medicine 23, 24. In physicochemical parameters, ash values like total ash, acid insoluble ash, water soluble ash, sulphated ash and extractive values were evaluated which serve as a reliable aid for detecting adulteration and identification of plant. Ash values give an idea about inorganic composition, other impurities present along with drug while extractive values are useful for the determination of exhausted and adulterated drugs. The chemical constituents of crude drug that are soluble in particular solvents can be known by extractive values 25, 26. Moisture content of drug should be at minimal level so that bacteria yeast or fungi will not grow during storage 27 - 28.

The preliminary phytochemical analysis showed the presence of maximum amount of flavonoids followed by terpenoids, steroids, cardiac glycoside, saponins and tannins. Fluorescent analysis under day light and UV light by treatment with different chemical reagents showed different colours. This is attributed to the UV light which produces fluorescence in many natural products that do not visibly fluoresce in daylight. Thus fluorescecne is used for qualitative assessment  of crude drug. Pharmacognostic studies are important in herbal technology as it ensures plant identity lays down standardization parameter which will help and prevent adulterations. Such studies will help in authentication of the plants and ensures reproducible quality of herbal products which will lead to safety and efficacy of natural products.

CONCLUSION: Standardization of a crude drug is very important for its proper and correct identification. The parameters evaluated in the present work will work as diagnostic parameters for identification of this plant. It will ensure authenticity and prevent the plant being adulterated and mishandling of the crude drug can be avoided. The therapeutic efficacy of the plant can be maintained.

CONFLICT OF INTEREST: The authors declare that they have no competing interest.