Kavitha Kotthireddy * and B. Rama Devi

ABSTRACT: A simple and accurate Reverse Phase High Performance Liquid Chromatography (RP-HPLC) method has been developed for the estimation of ketoprofen in vitro samples and in vivo samples from bulk drug and from administered transdermal dosage form, using Spherosorb S5 ODS of 10cm X 4.6 mm column, (5μm particle size). Mobile phase for in vitro sample analysis and in vivo plasma samples consists of 0.01 M sodium dihydrogen phosphate (pH adjusted to 6.5 with ortho phosphoric acid), methanol, and acetonitrile, 4:3:3 (v/v) respectively.  Isocratic elution technique was followed. The flow rate was 0.5ml/min and the detection was monitored out by UV detector at 265nm. The retention time for ketoprofen was found to be 2.982 in in vitro sample and 3.025 min in in vivo sample. Naproxen was used as internal standard for in vivo sample analysis. The proposed method has permitted the quantification of ketoprofen over linearity in the range of 100-1000 ng/ml.

in vitro, in vivo, analytical method

INTRODUCTION: Ketoprofen, is chemically (RS)2-(3-benzoylphenyl)-propionic acid,  is one of the propionic acid class of non-steroidal anti-inflammatory drug (NSAID) with analgesic and antipyretic effects 1. It acts by inhibiting the body's production of prostaglandin. Ketoprofen is a white or almost white crystalline powder having empirical formula C16H14O3 with molecular weight of 254.3 and melting point 94˚ to 97˚C. It has pKa of 5.94. It is practically insoluble in water, freely soluble in alcohol, acetone, and dichlormethane 2. Several analytical methods were reported for estimation of ketoprofen in pharmaceutical dosage forms 3.

Hence, the current research work was aimed to develop a specific, precise and accurate reverse phase HPLC method that could be applied in quality control for the determination of ketoprofen in in vitro and as well as in vivo biological samples in pure drug and from transdermal dosage form

Ketoprofen was obtained as gift sample from Ranbaxy. HPLC grade methanol and acetonitrile were supplied from Merck (Germany). All other chemical reagents were of analytical grade.

Chromatographic separation was carried out on HPLC system Shimadzu model LC-10 ATVp, a Shimadzu model SPD-6AV variable wavelength detector (Possessing deuterium lamp with a sensitivity of 0.005 AUFs and adjusted to an absorbency of 265nm), consisting of Spherosorb S5 ODS of 10cm X 4.6 mm column, (5μm particle size). The mobile phase, degassed under vacuum in an ultrasonic bath, consists of 0.01 M sodium dihydrogen phosphate (adjusted to pH 6.5 with orthophosphoric acid), methanol and acetonitrile, 4:4:3 (v/v), respectively. Isocratic elution technique was followed. The flow rate was 0.5ml/min and the detection was monitored out by UV detector at 265nm. The analysis was carried out at an ambient temperature and injection volume was 20 μl.

Preparation of Standard Solutions for in vitro sample analysis:

Preparation of Standard Solutions for in vivo sample analysis:

100 mL of fresh blood sample of sheep was collected from animal slaughter house for method development purpose. Plasma was separated from collected blood. To the 1 mL of separated plasma, 1mL of previously prepared standard ketoprofen solution of 100ng/mL was added. A suitable amount of the internal standard, Naproxen, 0.5 M phosphate buffer pH 2.0 (2 ml) and a mixture (4:1 v/v) of diethyl ether/chloroform (6 ml) was added to above solution.   The obtained mixture was then taken in centrifuge tube and centrifuged for 15 min at 5000 rpm.

After being shaken for 15 min and centrifuging, the upper organic layer was removed, dried with anhydrous sodium sulphate, and then evaporated to dryness at 30°C under a stream of oxygen-free nitrogen. The residue was dissolved in 100 μl of mobile phase and injected on to the HPLC column. Same procedure was repeated with other concentrations like 200, 400, 600, 800 and 1000ng/mL.

Preparation of test sample solutions for in vitro sample analysis:

Preparation of test sample solutions for in vivo sample analysis:

The study was conducted with the prior approval of institutional animal ethical committee. Male albino rabbits were included in the study. Hair present on the rabbit abdominal skin was carefully removed and weight equivalent to 10 mg of gel was applied to the abdomen. Blood samples were withdrawn from ear marginal vein at various time intervals and analysed as per the procedure given in the previous section. Concentration in each sample was analysed by using standard calibration plot.

The retention time for ketoprofen was found to be 2.982 in in vitro sample and 3.025 min in in vivo sample. 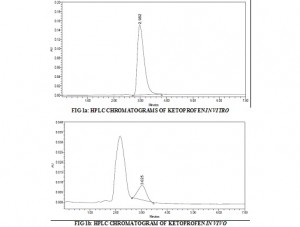 Calibration curve for estimation of in vitro samples: 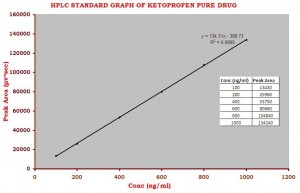 Determination of unknown concentrations of in vitro samples:

In vitro diffusion study was conducted for marketed gel and samples were analysed for diffused ketoprofen content by developed HPLC method. Calculated amount of drug diffused values are given in Table 1.

Calibration curve for estimation of in vivo samples:

Various concentrations of standard samples were mixed with plasma and processed as per the procedure given above. The prepared samples were injected into HPLC column. Ratio of peak areas of internal standard (naproxen) and test sample ketoprofen values of each prepared standard sample was calculated and taken on Yaxis and concentration was taken on X axis and calibration curve was plotted.  Regression analysis was done and R2 value and slope was calculated which was used for the estimation of unknown concentration. Calibration curve obtained is shown in Fig.3. 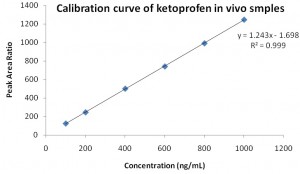 Determination of unknown concentrations of in vivo samples:

In vivo study was conducted in male albino rabbits as per the procedure given above. Plasma samples were analysed by developed HPLC method to check the method feasibility and applicability. Obtained plasma concentration values are given in the Table 2.

CONCLUSION: A novel RP-HPLC method was developed successfully for estimation of in vitro samples and in vivo samples of ketoprofen successfully.

Kavitha Kotthireddy * and B. Rama Devi