ABSTRACT: The emergence of novel antibiotics against the upsurge of “Superbugs” is a breakthrough health intervention. Daptomycin has gained prominence as a novel antibiotic produced by Streptomyces roseosporus which has demonstrated a broad spectrum of activity in vitro against a wide range of aerobic and anaerobic gram-positive bacteria, including methicillin-resistant Staphylococcus aureus and vancomycin-resistant Enterococci. The economic viability and large scale applicability of this high-value secondary metabolite is hampered by its poor production and tedious growth of S.roseosporus. The present study aims at strategic improvement of Daptomycin yield through reusability of the producer strain by its immobilization onto various non-conventional support matrices. Sufficient void volume, permeability, and cost effectiveness prompted the use of ultra porous refractory brick and ceramic foam for the immobilization of S.roseosporus. The surface area and porosity of the materials were characterized by BET surface analysis. Morphological transformations of the microbial cells were observed microscopically over the time. The cell mass adhered to the carrier was determined using SEM. The repeated use of immobilized cells led to high production in case of immobilized cells by refractory brick and ceramic foam i.e 336mg/L and 260mg/L respectively in lesser time than the free cells. Enhanced Daptomycin production was achieved by using refractory brick as immobilization carrier under submerged conditions. They showed high mechanical strength and reusability. To the best of our knowledge, this is the first report on immobilization strategy for Daptomycin production. Thus, this preliminary study can further contribute to the industrial scale production of Daptomycin.

INTRODUCTION: In today’s scenario, the health care sector is threatened with the problem of antibiotic resistance among Gram-positive bacteria, particularly in Staphylococcus spp., Enterococci spp. and Streptococci spp. 1, 2.

Daptomycin is a novel cyclic lipopeptide antibiotic produced by Streptomyces roseosporus, which has demonstrated a broad spectrum of activity in vitro against a wide range of aerobic and anaerobic gram-positive bacteria, including methicillin-resistant Staphylococcus aureus and vancomycin-resistant Enterococci due to its  unique mechanism of action.

This antibiotic has got the FDA approval only in 2003 for the treatment of patients with complicated skin and skin structure infections, right-sided endocarditis and bacteremia 3.

Presently, cell immobilization is a useful technique to investigate the potential of new bio-industrial production processes.

The application of immobilized cells for improved production of potential drugs is one of the main areas of bioprocess technology. Several researchers have contributed to explore how the phenomenon of immobilization affects growth and metabolite production 5.  Immobilization proves beneficial in maintaining high concentration of cells without the need to grow cells further for the metabolite production. Cell immobilization can provide many operational and economical advantages such as prolonged metabolic activities, reuse of biocatalyst and preventing washing out of cells at higher fermentation flow rates 6. It includes easier handling of cells, easier separation of products, higher dilution rates, and continuous operation. The standard fermentation processes suffer several drawbacks such as low cell density, nutritional limitations, and batch-mode operations with high down times 7. It has been established that the microbial cell density is of prime importance to attain higher volumetric productivities.

Medium and culture conditions: Streptomyces roseosporus was cultivated and maintained at 300C and 200 rpm in culture broth medium containing (g/ L): malt extract 3, glucose 10, yeast 3 and peptone 5 at pH 6.5. Fermentation was carried out in medium containing (g/L) Dextrin 30, Glucose 10, Soyabean flour 20, Fe (NH4)2SO4 0.6, KH2PO4 0.2, and pH 7 and incubated at 30 0C for 6 days. Cofactors were added to the sterile culture medium after aseptic filtration. The culture was incubated at 200 rpm for 6 days. N-decanoic acid was fed at 48 h after inoculation (0.2 g/l). All experiments were done in triplicate 10.

Cell Growth and Product Estimation: 10 mL broth sample was centrifuged and the supernatant was rejected. Pellets were washed thrice with distilled water. The centrifuged biomass was transferred to a pre-weighed aluminium cup kept at 850C for 24hrs until a constant weigh was achieved.  The dry cell weight was determined by subtracting the weight of aluminium cup from the previous weight. At specified intervals, Daptomycin was analyzed using disk diffusion method using M.luteus as the assay organism. The sugar in samples was estimated by the dinitrosalicylic acid method [DNS] 11. Crude antibiotic in media was mixed with acetonitrile, allowed to stand for 5 min and centrifuged at 10 000 rpm for 5 min. HPLC analysis of concentrations of daptomycin in reaction samples were performed. 20 µL of the supernatant was injected into the HPLC system.

The stationary phase was SunFireTM C18 5µm (4.8X250mm) Column (Waters Corporation, Milford, MA, USA). The mobile phase was 0.2 M phosphate buffer (pH 5.5) and acetonitrile (70:30). The pump flow rate was set at 1mL/min (Waters 515 HPLC Pump) and the detection was done by PDA detector (Waters 2998). Daptomycin’s retention time was found to be 6.1min. Also, an extensive analysis of each carrier was done to establish the characteristic properties. The refractory brick was procured from local brick kiln and the ceramic foam was obtained from Department of Ceramic Engineering, IIT (BHU), Varanasi. The surface properties were determined by BET analysis. The texture and properties of the immobilization matrices chosen are detailed in Fig. 1 and Table 1. 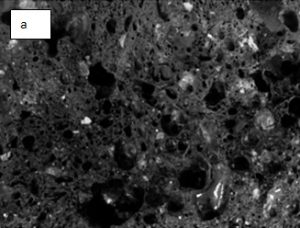 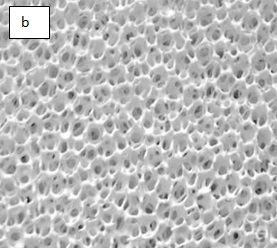 FIG. 1:  TEXTURE OF A) REFRACTORY BRICK AND B) CERAMIC FOAM.

TABLE 1: CHARACTERISTICS OF THE CARRIER MATERIALS USED FOR IMMOBILIZATION OF S.ROSEOSPORUS FOR DAPTOMYCIN PRODUCTION

Morphological analysis: During the S. roseosporus cultivation process for Daptomycin. The typical morphological characteristics of S.roseosporus with wide variety of differentiation patterns were observed with respect to time as shown in Fig. 1.  Microphotograph during the production process was recorded.

Immobilization of S. roseosporus on refractory brick flakes and ceramic foam: Refractory brick and Ceramic foam were mechanically crushed and sieved uniformly to particle size of 5mm. These were pretreated by boiling in water for 20 minutes at 800C and washed with distilled water. They were placed in methanol for 3hrs. Then, washed again with distilled water. For the immobilization of S. roseosporus on the support matrices, 2.0 g of pretreated carrier were placed in a 250 ml Erlenmeyer flask containing seed medium. After sterilization (1210C and 15lbs/in2 pressure for 20 minutes), the flasks were inoculated with 0.5 ml of homogenized mycelia (0.15 dry cell weight of mycelia g/l) under sterile conditions. S.roseosporus is found to grow profusely on carrier after 5 days of incubation. The growth medium was then removed and the immobilized cubes were thoroughly washed with autoclaved saline water under sterile conditions. Experiments were carried out for Daptomycin production by transferring the immobilized cubes into the production medium under sterile conditions.

Cell Leakage Estimation: The free cells and cells leaked from the support matrix were collected by centrifugation at 10,000rpm for 20 minutes and dried at 900C. The initial weight of each support matrix was determined by drying specified quantity to a constant weight.

Visual Observation of the broth: On microscopic observation Fig. 2, three types of morphological forms can easily be observed, freely dispersed long slender smooth filamentous hyphae (up to 48hrs); moderately swollen hyphal fragments(up to 120 hrs) and highly swollen hyphal fragments, unicellular arthrospores(at 144hrs). The maximum rate of Daptomycin production coincides with the differentiation of filamentous hyphae to wide, highly swollen and metabolically active hyphal fragments. A remarkable change was observed in the broth characteristics, after 3-4 days as Daptomycin broth exhibited high viscosity. Morphological variations have often been related to production process in case of many filamentous microorganisms 13. 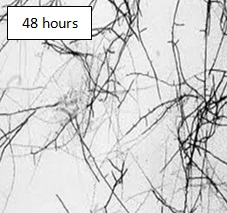 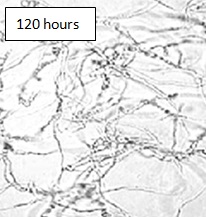 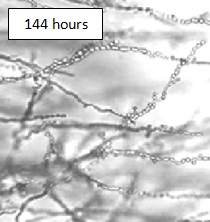 Immobilization of S. roseosporus on refractory brick flakes: The production profile of immobilized cells reveals that the biomass adhered to refractory brick increase in a continuous but slow manner. This zone may well correspond to a superficial adhesion of mold cells to the external surface. The extent of the cells varies from the easily accessible macro pores to the deep rooted micro pores. The antibiotic production started at 24 hours of fermentation with immobilized cells on refractory bricks and reached maximum level (336mg/l) by 108hours. On further incubation, no improvement in antibiotic titre was observed. In case of free cell fermentation, the maximum antibiotic production (345mg/l) was observed by 132hours. 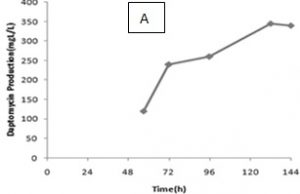 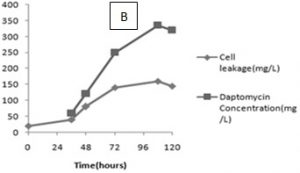 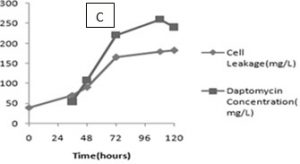 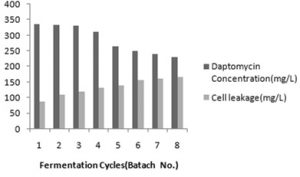 SEM images of Immobilized Cells: S.roseosporus cells immobilized on refractory brick and ceramic foam were studied by scanning electron microscopy. The SEM photograph showed that cells were randomly distributed in the pores of the carrier matrix as seen in Fig. 5. The photographs show the inner pores of carriers used, which were densely populated by the immobilized cells. The porous network was covered with the S.roseosporus cells which were adsorbed on to the matrix surface. 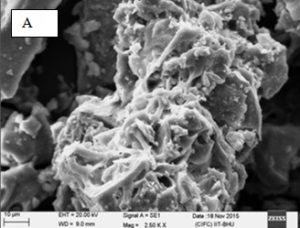 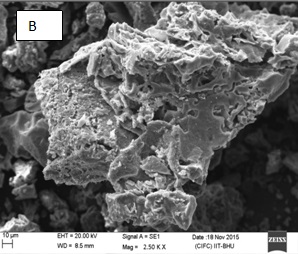 FIG. 5: SEM ANALYSIS OF IMMOBILIZED CELLS ON (A) REFRACTORY BRICK AND (B) CERAMIC FOAM

Significance of Whole Cell Immobilization in Daptomycin Production: The comparative evaluation of the Daptomycin production with immobilized cells on various support matrices depicted the importance of whole cell immobilization. Table 2 gives a summarized view of the same. The amount of cell mass produced, varied with the type of support matrices used. The variation was due to the characteristics of surface matrices since the attachment of microorganism occurs as a result of physiological interaction between the cell wall and the surface of support matrices.  Since, the cells grown in suspension were immobilized at or after maximum growth had reached and the onset of idiophase had taken place, the immobilization phenomenon decreased the growth rate but improved the overall production of the desired product. The maximum specific growth rate of the S.roseosporus free cells, refractory bricks and ceramic foam was found to be 0.035, 0.03 and 0.028h-1 respectively. This was actually beneficial for the production of antibiotic as this antibiotic fermentation is non growth associated 14. The leakage of cells in refractory brick was less as compared to ceramic foam.

Also, better exchange of metabolite does also improve Daptomycin production in case of refractory brick as compared to ceramic foam. The specific growth rate is affected by both these factors i.e. cell leakage and metabolite exchange. The increased production of Daptomycin in immobilized system over free cells is accounted due to changes in permeability of cell wall as well as reusability of the matrices 15. Immobilization capacity, time for immobilization, Daptomycin production with immobilized biomass and finally mechanical stability of the carrier are the key factors to be noted. Though both refractory brick and ceramic foam have the capacity of immobilization of cells yet refractory brick has an edge over the ceramic foam as it is a cheaper source of carrier material, it can immobilize higher amount of cells and causes less cell leakage. Ceramic foam has ability to reach an acceptable quantity of adhered biomass in a substantially lower time which is its sole advantage in this case.

TABLE 2: COMPARISON OF DAPTOMYCIN PRODUCTION BY FREE AND IMMOBILIZED CELLS OF S.ROSEOSPORUS

CONCLUSION: The present study confirmed that Daptomycin production with immobilized cells showed satisfactory results. Non-conventional support matrices were utilized effectively for this purpose. Immobilization of whole cells of S. roseosporus is desirable for Daptomycin production since its growth rate is slow and several morphological alterations take place over the time. The observations indicated the fact that whole cell immobilization can have enhanced production despite of their sluggish growth. Higher cell concentration and specific rates of production could be maintained since stability of such systems is better than free cell systems. Free cells showed dense growth causing a considerable rise in broth viscosity which adversely affects the oxygen transfer and nutrient transfer into the cells. Moreover, high cell concentration could be maintained by immobilized systems without much potential danger of cells being washed out at high rates. Comparing the two adsorbents viz. ultraporous refractory brick and ceramic foam, ultraporous refractory bricks was found to be more suitable matrix for S. roseosporus due to porous network, stability, reusability and cost effectiveness.

Though, immobilization has several advantages yet it imposes mass transfer limitations and stress conditions when applied at large scale. This aspect of cell immobilization would be focused upon in our future efforts.