INTRODUCTION: Ritonavir (RIT) and lopinavir (LOP) both are antiretroviral drugs specifically belongs to protease inhibitors class. Literature survey reveals some methods for their determination by HPLC 1-4 or spectrophotometry 5-6 either alone or in combination, but no method was found for the selected combined dosage form by first order derivative spectrophotometry. For the routine quantitative estimation of these drugs, a simple, accurate and sensitive method was required. Hence the proposed method was developed.

Standard Stock Solution: The stock solutions having 1mg/mL solutions of RIT and LOP were prepared separately by dissolving an accurately weighed quantity of drugs in acetonitrile.

Selection of Scanning Range and Sampling Wavelengths: The standard solutions of RIT and LOP were diluted with acetonitrile individually to get the concentration of 20 and 80 µg/mL, respectively and were scanned in the UV range 400-200 nm. The spectral data was then processed to obtain first order derivative spectrum at wavelength interval of 0.1 nm. The two spectra were overlain (Figure 1). It appeared that RIT showed zero crossing at 278.10 nm while LOP showed zero crossing at 246.70 nm. At zero crossing point of RIT (278.10 nm), LOP showed a measurable dA/dλ where as at the zero crossing point of LOP (246.70 nm), RIT showed appreciable dA/dλ. Hence, the wavelengths 278.10 nm and 246.70 nm were selected as analytical wavelengths for determination of RIT and LOP, respectively.

Analytical concentration range and plotting of calibration curves: For the linearity study, aliquots of the drug solutions were further diluted with acetonitrile to get the final working standards of concentration range as RIT as 5-40 mg/mL and LOP as 20-120 mg/mL respectively. The first derivative spectra was taken and the derivative absorbance at 246.70 nm and 278.10 nm for RIT and LOP were measured, respectively. The calibration graphs of both the drugs were plotted at 246.70 nm and 278.10 nm (Figure-2 and Figure-3). The following regression equations for both the drugs were used for the quantitative estimation of samples.

Where, α = Intercept; β= Slope, C= concentration in µg/mL, A= absorbance of the first order derivative curves at 246.70 nm and 278.10 nm for RIT and LOP respectively. r = correlation coefficient.

Estimation of drugs in Standard Laboratory Mixture by proposed method: The mixed standard solutions of RIT and LOP (20:80µg/mL) were scanned at analytical wavelengths and their derivative absorbance were noted. The concentrations of both the drugs in the mixed standard solution were obtained from the regression equations of RIT and LOP. The results are depicted in Table 1.

Application of proposed method for the estimation of RIT and LOP in tablets: Tablets containing RIT (50 mg) and LOP (200 mg) were weighed and finely powdered. A quantity of powder equivalent to RIT (50 mg) was accurately weighed and transferred to volumetric flask and was dissolved in acetonitrile. The solution was then filtered through Whatman filter paper No.1 and the volume was made up to 50 mL. Aliquot of the solution was diluted with acetonitrile to get the working standards of RIT as 20µg/mL (~LOP as 80µg/mL). The sample solution was scanned for the absorbance at 246.70 nm and 278.10 nm. The concentration of both the drugs in the tablet solution was determined by using the regression equation. The results are shown in Table 1.

Recovery Studies: To the preanalyzed tablet powder solution, pure drugs of RIT (10 mg) and LOP (20 mg) were added.The mixture was shaken thoroughly and diluted upto the mark with acetonitrile and filtered through Whatman filter paper No.1. Aliquot portions of the resultant solution was appropriately diluted with acetonitrile to get concentrations within the range of mixed standards. The derivative absorbance of the solutions was measured at the analytical wavelengths.

The concentration of the two drugs in the mixed standard solution was obtained from the regression equations of RIT and LOP, respectively.The weight of RIT and LOP contributed by tablet powder calculated earlier, was deducted from total RIT and LOP estimated. The remaining amount of drug was assumed to be recovered from that was added.  The results of recovery studies on the marketed prepartion are shown in Table 1.

Validation Parameters: Study of some validation parameters like accuracy (recovery studies), precision(S.D), specificity and ruggedness were carried out as per ICH guidelines and the results are shown in Table 1 and 2. 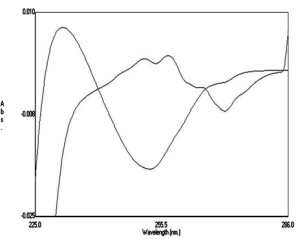 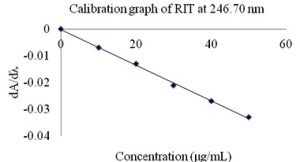 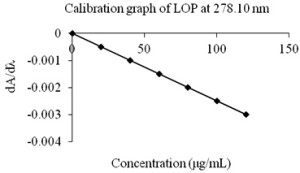 TABLE 2: RESULTS OF SPECIFICITY AND RUGGEDNESS

Thus, the results obtained by the proposed first order derivative method has determined the percent content of RIT as 99.54±0.42 and LOP as 100.07±0.14 in bulk drug mixture whereas the analysis of marketed tablet estimated the percent of the label claim as RIT- 98.17±0.43 and LOP- 101.6±0.55. The recovery study done by standard addition method has given satisfactory results as RIT -99.05±0.17 and LOP-99.03±0.21 respectively. Validation of the proposed method was carried out as per ICH guidelines and the results obtained were found to be satisfactory.

CONCLUSION: The first order derivative method proposed for the simultaneous determination of RIT and LOP was found to be accurate and sensitive as the absorptivity of LOP was less and at lower concentrations it was difficult to quantify it.

Hence, the present method is quite good and simple for the estimation of both the drugs in combined tablet dosage form.

ACKNOWLEDGEMENTS: The authors are thankful to the Director, Sharad Pawar College of Pharmacy, Nagpur, for providing necessary facilities for research work. They are also grateful to Cipla Ltd., Goa and Patalganga, for giving gift samples of pure drugs.