Department of Chemistry, The Oxford College of Pharmacy *1, Bangalore- 560 068, India

The intended purpose of this work is to develop and validate a dissolution test for betamethasone acetate and betamethasone sodium phosphate injectable suspension using a reverse-phase liquid chromatographic method. After testing sink conditions, dissolution medium and stability of the drug, the best conditions were: flow through cell of diameter 22.6 mm, 2.0 ml per minutes flow rate for 120 minutes, 500mL of sodium dihydrogen ortho phosphate buffer pH 7.4 with 2.5 % of sodium lauryl sulphate as dissolution medium, using a USP Apparatus IV (A flow through cell dissolution apparatus with seven cells dissolution tester Sotax CE7). The method was validated to meet requirements for a global regulatory filing and this validation included specificity, precision, linearity and accuracy. Release of more than 85% of the label amount was achieved over 60 min in the medium through out the study. The dissolution test developed was adequate for its purpose and could be applied for quality control of betamethasone acetate and betamethasone sodium phosphate formulation dosage form.

Betamethasone Phosphate and Betamethasone Acetate are prodrugs used to treat corticosteroid-responsive disorders 5. As a combination product they achieve their pharmacological effects through the immediate and slow release of Betamethasone 6-7.

Literature search revealed that as such there is a lack of method by which in vitro dissolution rate can be accurately quantified 8. Although there are methods available for determination of betamethasone in human plasma by tandem mass spectrometry 9, assay determination by HPLC 10, with different combinations 11, also the data of stabilizations are available 12.

This study, describes the development of a fast, accurate and precise HPLC method with isocratic elution for determination of betamethasone in pharmaceutical formulations and in dissolution media for drug quality control purposes. The dissolution method was also developed and validated according to USP guidelines 13.

Sodium dihydrogen ortho phosphate buffer pH 7.4 with 2.5 % of sodium lauryl sulphate was used as a dissolution medium. The mobile phase was filtered through a 0.45 µm membrane filter (Millipore, Barcelona) and degassed under vacuum by filtering assembly, prior to use. The pharmaceutical preparation, declaring to contain betamethasone acetate and betamethasone sodium phosphate was obtained from Strides Arcolab, Bangalore, India for analysis.

Dissolution testing was performed in compliance with USP {711} using apparatus 4 with flow through cell. A dissolution medium of sodium dihydrogen ortho phosphate buffer pH 7.4 with 2.5 % of sodium lauryl sulphate was chosen based on the solubility profiles obtained and its benefits compared to others. Flow rate of 2.0 ml per minutes for 120 minutes was selected with media volume of 500 mL. The medium, which was vacuum degassed under degasser (Electrolab), was maintained at 37 ± 0.5°C. Samples were drawn at 5, 10, 30,45,60,90,120 mins for early validation work.

Chromatographic method: An HPLC method with UV detection was selected for the method of analysis. The reversed-phase procedure utilized a Waters Symmetry, C18, 150mm x 4.6 mm, 5μ and UV detection at 254 nm. This wavelength was selected because it is a UV maximum and provides enough sensitivity needed for quantitation of this drug concentration in the dissolution samples. The column temperature was maintained at 35°C.

The mobile phase contained methanol and 10.2gl−1 solution of potassium dihydrogen phosphate buffer (700 : 500 v/v, respectively). The flow rate was 1.2 mL min−1 for 12 min with an injection volume of 20 µL. A standard solution of active pharmaceutical ingredient (API) was prepared first in mobile phase, and subsequently diluted down to the appropriate concentration with dissolution medium.

The results obtained in the preliminary studies were satisfactory. After setting dissolution parameters, the chromatographic parameters were optimized. For some of the parameters the reference of related substances method from betamethasone API in United States Pharmacopoeia 15 was considered during development.

During development the major problem observed is of the peak response and the peak shape. There were different trials taken for optimization of the HPLC column, the Waters µ Bonda pack column is selected because of its larger surface area (220 m2 g−1) and medium carbon loading (6.2%), and as a result a good peak shape with tailing of about 1.2–1.3 was achieved, which was well within the acceptance criteria of <1.5 as per various pharmacopoeia. The concentration of sample solution was such as 1.0mg mL−1.

During spectrum scanning the wavelength where maxima observed was 254nm which is a magnifying wavelength, even though the desired response was not achieved, to overcome this difficulty the injection volume is increased. Initially a few trials are taken with different injection volumes e.g. 5µL etc. which has not satisfied the requirement of method by mean of peak response, and considering the probable very low concentration of initial time points during performance of dissolution profile the injection volume optimized is 10 µL, wavelength is 254 nm.

After optimizing all the parameters, the method was checked for quality control purpose successfully.

Specificity: The aim of the Specificity study is to assess unequivocally analyte in presence of components that may be expected to be present. The specificity of the method was checked for diluent interference as well as all the other excipients interference. Diluent and subsequently placebo mixture (in triplicate) were injected to check any interference. Purity factor of analyte peak is found greater than purity threshold and no peak due to placebo was detected at retention time of analyte peak. The study proves that test method is specific for quantification of dissolution of analyte without interference of any other excipients. 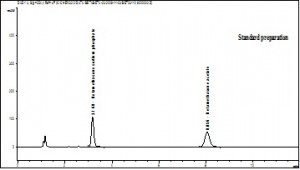 Method Precision: The purpose of this experiment is to prove the repeatability of the results obtained by this quantification methodology. To conform the repeatability six sets of sample solution were injected and % RSD of the results was observed. To comply this parameter the value of % RSD shall not exceed 6.0% the resulting RSD was within the acceptance limit and showed the method is precise.

For acceptance of results, % RSD of individual analyst shall not exceed 6.0% and difference between two analysis shall not be more than 5.0%. The experiment yielded the % RSD of 3.2% and 2.5% and the difference of %RSD was 2% which shown that the method is rugged. 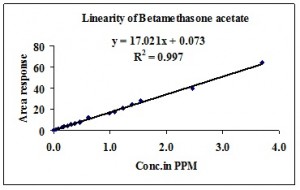 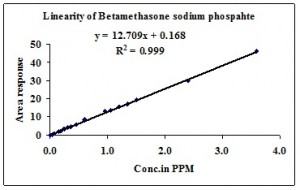 Accuracy (by recovery): Accuracy of test method was performed in the range of 50.0% to 300.0% (50.0%, 100.0%, 200.0% and 300.0%) of target concentration of analyte. Triplicate sets of samples at each concentration were prepared and injected by single injection into the liquid chromatography system and chromatograms were recorded. The two acceptance criteria were placed for conformance of accuracy, the % RSD of all the sets shall not exceed 5.0% and the % recovery shall be within 95.0% to 105.0% for all the sets (Table 3).

CONCLUSION: The possibility to obtain with a dissolution test reliable results on the pharmaceutical to be tested is essential to ensure the quality, safety and efficacy of the developed drug product. A dissolution method with HPLC analysis for Betamethasone acetate and Betamethasone sodium phosphate in injectable suspension has been fully validated to meet global regulatory requirements. The methodology was evaluated for specificity, linearity, precision and accuracy in order to establish the suitability of the analytical method. The conditions that allowed the dissolution profile determination were flow through cell (USP apparatus 4) and 2.0 ml flow rate.

The method was demonstrated to be adequate for quality control of betamethasone acetate and betamethasone sodium phosphate dosage form.

Department of Chemistry, The Oxford College of Pharmacy, Bangalore- 560 068, India