DEVELOPMENTS OF CARCINOGENESIS INDUCED BY ABNORMALITIES OF WNT GENES

DEVELOPMENTS OF CARCINOGENESIS INDUCED BY ABNORMALITIES OF WNT GENES

Wnt Genes in Cancer Development: Wnt genes were mutated or highly expressed to the stimulated vast growth of cancer cells. These cells were lead to enormous death rate compare then other diseases. Many types of cancer were stimulated by mutation or overexpression of specific genes.

Abnormalities of Wnt genes were regulated carcinogenesis, and 19 Wnt genes have been the specialized role in cancer development. Each Wnt gene plays a crucial impact in each cancer type 5.

Cancer Stem Cells in Breast: Nowadays, breast cancer plays a crucial role in human death, and it occurred mostly in the female. Most of the genes were involved in tumorigenesis and some Wnt genes highly expressed in breast cancer. Wnt1 gene was first identified as an ongogene in mouse mammary tumor 1. Wnt1 gene highly expressed in breast cancer, and most of the case mutated Wnt1 gene promoted breast cancer. Normally Wnt1 gene has important role in self-renewal and proliferation of stem cells, likewise abnormality of Wnt1 gene regulated self-renewal, differentiation and proliferation of cancer stem cells in the breast. Other all Wnt genes were also regulated breast tumor 6.

Cancer Stem Cells in Rectum: Wnt genes were involved in one part of cancer development such some colorectal or colon, or rectal cancer was caused by abnormalities of Wnt genes. Overexpression of Wnt genes such as Wnt1, Wnt2, Wnt3, Wnt6, Wnt9a, Wnt10A, and Wnt16 were induced specialized cancer of colorectal cancer 9. Wnt2 gene was highly expressed in colon cancer.

Mutation of Wnt genes such as Wnt5a, Wnt7a, Wnt10B, and Wnt16 have also stimulated the regulation of cancer development in the colon. These Wnt genes were also involved in cancer stem cells self-renewal in rectum 8, 10. 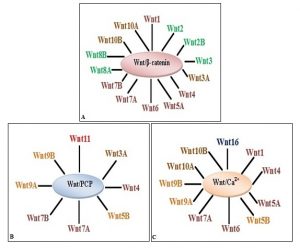 Cancer Development in the Prostate Gland: In the prostate gland, aberrant expression of Wnt genes was regulated cancer development in male. Prostate cancer one of the critical cancer type because a lot of males died for this cancer 11.

Other Types of Cancer: In cancer, Wnt genes have stimulated the regulation of a variety of cancer, and some genes were specialized to caused specific cancer type. Wnt1 Wnt2, Wnt5a, Wnt7b, Wnt10a, Wnt10b genes were expressed in esophageal squamous cell carcinoma. Wnt1 and Wnt5a were highly expressed in melanoma 22, 44.

Mutation of Wnt2b, Wnt4, Wnt5a, Wnt10a, and Wnt16 have induced the regulation of cell growth and differentiation in leukemia. In endometrial cancer, Wnt genes have a specialized role in self-renewal of cancer stem cells, and Wnt2, Wnt3, Wnt4, Wnt5a, Wnt7a, Wnt7b, and Wnt10b genes were expressed in endometrial cancer 16. Wnt9a was reported in acute lymphoblastic leukemia. Epigenetic inactivation of Wnt7a and Wnt9a were recently reported in pancreatic cancer 5.

CONCLUSION: Cancers are one of the critical diseases in our animal kingdom. Many of the cancer was caused by physical, chemical, and biological factors. These all factors were affected the cellular level of function. These functions were stimulated via various signaling pathways.

In cell-cell interaction, signaling pathways were communicated one cell to other cells. Therefore, abnormalities of all signals were regulated a variety of cancer and other disorders.

In cancer, inhibition of Wnt signals important strategies of cancer treatment. Many drugs were synthesized against the abnormalities of the Wnt signaling pathway. But these drugs were killed cancer cells, not cancer stem cells. So, a new herbal product of drugs will use to kill cancer stems cells without side effect.