INTRODUCTION: Diabetes mellitus is a merge of assorted disorders that commonly arise with the happening of hyperglycemia and glucose intolerance. Due to which there be a lack of insulin production will occur 1. Such problem arises due to derangements in the restrictive systems for entrepot and gathering of metabolic fuels, which include the anabolism and catabolism of lipids and proteins emerge from faulty insulin secretion, insulin action, or both 2.

Type 2 diabetes mellitus is also known as noninsulin-dependent diabetes and maturity onset diabetes. It is the chronic condition in which our body cell does not produce sufficient insulin to maintain the normal glucose level of our body. This type was mainly found in adult and the obese patient 3. There be no cure for type 2 diabetes mellitus, but we can manage the condition by doing exercise, control our diet, or by maintaining the weight. If the diet and exercise fail to maintain the glucose level than the medicine and the insulin are given to the patient to maintain the blood glucose level. Symptoms occur frequent urination, increase thrust, increase hunger 4.

Epidemiology: Diabetic retinopathy (DR) is a major cause of blindness among the working age group 5, 6, 7. According to the World Health Organization, India will become one of the major hubs of the diabetic population during the next 2 decades; the number of cases of adult-onset diabetes mellitus will grow to nearly 80 million in 2030 from 18 million in 1995 6. In the Indian subcontinent, only limited data are available on the prevalence of DR in the general population.

Normal Glucose Homeostasis: Blood glucose levels in the healthy people are normally maintained in the range by the harmonization between absorption of the glucose, uptake, and metabolism by the tissue that is peripheral tissue and hepatic glucose production. For the regulation of the blood glucose level, insulin is the main hormone. The insulin is secreted by the pancreatic beta cells located in the pancreas. As the insulin maintain the blood glucose level in the body. It has a major biological effect by binding and activating a specific plasma membrane receptor at the target tissue in peripheral 10.

By the translocation the glucose transporter 4 from the site of the intracellular to the surface of the cell, the insulin stimulates imbibing in fat cells and muscle. After that, the insulin promotes glycolysis and stores the glucose and other substances restorative lipid glycolysis and protein synthesis. Insulin stimulates glycogen synthesis and lipid synthesis in hepatocytes. It also inhibits the production and the release of glucose by suppressing gluconeogenesis and glycogenolysis 11.

Insulin Resistance and β-cell Dysfunction: The alteration in the glucose level leads to diabetes, including insulin resistance, large or overproduction of the glucose in the liver and the abnormalities in the pancreatic beta cell function. This defect can occur due to the factor like environmental risk, obesity, or may be due to genetic also; sometimes the hyperglycemia itself can damage the beta cell 12.

An overview of the multiple interacting pathways leading to the pathogenesis of diabetic retinopathy is shown in Fig. 1 below. 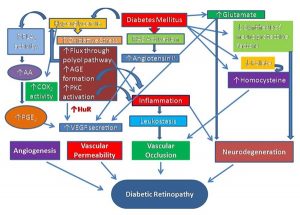 Macrovascular and Microvascular Complication of Diabetes: Diabetes is the groups of the disease which occur due to the hyperglycemia as increase the glucose level in the body. Due to the increase in the glucose level in the body, they can harm our body in many ways. For the prevention and controlling the increase of glucose, medical science uses the large array of pharmaceutical interventions 16. The disease occurs due to diabetes is of two types, the one which occurs in the small vessel is the microvascular disease, and the injury which occurs in the large blood vessels of the body is the macrovascular disease 17.

I. Oxidative Stress: It is found that there will be the high content of polyunsaturated fatty acid and the high oxygen uptake; this may lead the retina to be more suspect of the oxidative stress. It is reported that the lipid membrane peroxidation and the damage to DNA by oxidative and the ROS induced injury are elevated in the retina in the diabetic patient that further play role of oxidative stress in diabetic retinopathy 26. The activation of the enzyme that is antioxidant defense enzyme in diabetes are responsible for the forage of free radicals such as SOD, glutathione peroxide and the catalase are decreased in the retina 27.

II. Aldose Reductase and Polyol Pathway: The aldose reductase (AR) is the reductase which catalyzes the reductase of the glucose to sorbitol. Aldose reductase is an NADPH dependent oxidoreductase which is mainly known for the catalyzing. The polyol pathway first step is to metabolize glucose 27. It is noticed that in the normal conditions the glucose is metabolized firstly through the glycolytic pathway, but in the diabetic condition, there be access production of the glucose, due to this the excessive glucose is utilized or metabolized by the polyol pathway or the aldose-reductase enzyme. The increase in the aldose-reductase activity may develop diabetic complications. The glucose flux may lead to sorbitol gathering and accompanying cellular damage through polyol and aldose-reductase 28.

III. Advanced Glycation End Products: It has been noted that modification of the protein plays an important role in the diabetic complication. The glucose produces the advanced glycation end products (AGEs) participates in non-enzymatic glycation. The AGEs and the receptor of the AGEs are localized to the retinal vasculature and the vascular ECs. The protein function is altered by the AGEs which interfere with the extracellular matrix function and cause the advancement of cytokines 29, 30.

IV. Protein Kinase C Activation: Protein kinase plays an important role in the transduction of the adverse effects of high level or increased level of glucose in retinal vasculature. This was proved by the fact that the exposure of cultured ECs to the hyperglycemia or the high level of glucose leads to the rapid induction of the protein kinase family 31. The protein kinase activates PKM in the framework of diabetes. Due to the activation of the PKM, the vascular effects leading to the progression of the diabetic retinopathy. PKM involved the various growth factors and regulated cellular activity 32.

V. Mitogen-Activated Protein Kinase Activation: It was shown that the MAPK (Mitogen-activated protein kinase) pathway play an important role in the progression and the development of a diabetic complication. MAPKKK, MAPKK, and MAPK are the sequence for the activation of the MAPK. By the activation of MAPK, the glucose-induced ECM protein synthesis in ECs is mediated 32. There be the activation of the transcription factors like NF-κB and activation protein 1 (AP1) by MARK phosphorylation. It was noted that the inhibition of MAPK or PKC helps to normalize the effect of hyperglycemia. As the MAPK activates it may lead to the increasing level of the glucose and patient will suffer from diabetes and the diabetic retinopathy 33.

VI. Leukostasis and Platelets Activation: It was known that for the inflammatory processes the attraction and adhesion of leukocytes to the vascular wall are mediatory. There is the leukocyte stiffness due to the increasing level of the glucose that develops the capillary nonperfusion in retinal vessels 34. Leukostasis has been suggested as the main factor in the death of the retinal endothelial cell in diabetes. A postulated cause of capillary nonperfusion involves platelet activation in diabetes 35.

VII. Nuclear Factor Kappa B: Nuclear factor kappa B is the transcriptional factor which is the important factor in the regulation of the many genes which involves mammalian inflammatory and immune responses, proliferation and apoptosis 29. There is the inhibition of the protein which is regulated by NF-κB which further inhibits the diabetes-induced degeneration of retinal capillaries. The development of the retinopathy is inhibited by the inhibition of the NF-κB 28, 29.

Due to this, the retina will pull away from the back of the eye which ultimately causes the spots floating in the vision and the many other problems like severe vision loss. Glaucoma is the other complication of the diabetic retinopathy. In this, there will be leaking of the blood vessels occur and also have an abnormal growth of the new blood vessels in the retina which can lead the abnormal growth of blood vessels in iris that disturbs the normal flow of fluid in the eyes that cause the pressure to build up. It ultimately leads to damage to the optical nerve and sometimes causes permanent damage to the vision 37-39.

Memory and Cognition: Cognition is defined as the mental action and the process of understanding through thought, senses, and experience. Memory is the process of retrieving knowledge. The knowledge is gained by experience such things like remembering events, thing, places, and the name and another important thing would be considered as memory 40. The memory can be categorized into two parts that are the declarative memory and non-declarative memory. Learning new thing, new facts, events, and material come under the declaration memory. While the reflective or incidental memories come under the nondeclarative memory.

The "brain working memory" is defined as the ability of the brain to recall the information immediately when it needed or for the subsequent thought. A wide range of cognitive impairment will occur when the working memory is damage. Due to this damage, the person will not be able to think properly in a different situation, and sometimes he or she will not recognize their family member also 40. Our knowledge is the mechanisms of remembering and thinking of things. Our every thought will arise for the different area of the brain such as the cerebral cortex, thalamus, limbic system and the reticular formation of the brain stem. The memory is the result of some events in the synaptic transmission by changing its basic sensitivity. The temporal memory trace can create short-term memory. When there may be temporary chemical and physical changes which can last for the few minutes and few weeks makes an intermediate long-term memory. There be the structural changes or alteration will occur which are last for weeks to year are the long-term memory loss. Which thought are important which are saved into the memory are decided by the thalamus part of our brain. There is a neuropsychological evaluation that measures the cognitive abilities of the patient. As the sensitivity, reliability, and specificity are the important aspects that should be considered 41.

CONCLUSION: Diabetes is a metabolic disorder characterized by hyperglycemia, polyuria, polydipsia, and polyphagia. Diabetic retinopathy has been considered to be the major complication of diabetes that may lead to permanent damage to eyes. Various studies have already been reported to overcome the damage caused by Diabetic retinopathy.

ACKNOWLEDGEMENT: I am highly indebted to Mr. Sourabh Kosey for their guidance and constant supervision as well as for providing necessary information regarding the project & also for their support in completing the project.