ABSTRACT: Background: Hypercholesterolemia is rapidly becoming a worldwide epidemic that affects children and adults. Some attempt had made to generalize a relationship between hypercholesterolemia and infertility, but until now it remains scanty. Thus, the aim of the present study was initiated. Methods: Male Wistar rats were divided into four groups of six each (n=6). The first group was control and second, third and fourth groups were fed with pure cholesterol and cholic acid orally once a day for 30 days. Body weights were noted weekly. At the end of treatment duration all animals were sacrificed by cervical dislocation. Epididymis and testis were carefully removed and the organ weights were evaluated. Left epididymis was used for sperm count and sperm morphology. Blood sample were separated and used for determination of MDA level. Serum was used to determine the Total cholesterol (TC), Triglyceride (TG), HDL levels. LDL, VLDL levels were calculated. Results: Cholesterol-fed animals showed significant increases in obesity index and blood TABARS levels. TC and TG and LDL levels were also increased significantly. HDL level were decreased. Reproductive organ weights and sperm counts in the epididymis were significantly decreased. Furthermore, sperm abnormality was increased in high cholesterol fed animals as evidenced by a trend toward reduction in fertility potential. Conclusion: In conclusion, our data showed that diet-induced hypercholesterolemia adversely affects semen quality by reducing sperm count and a rise in altered sperm morphology. The low sperm quality may cause a reduction in fertility potential and lead to impairment in male fertility.

INTRODUCTION: Hypercholesterolemia is a lipoprotein metabolic disorder characterized by high serum low density lipoprotein and blood cholesterol. Cholesterol is a steroid lipid found in the cell membranes and transported in the blood plasma of all animals.

Cholesterol is an essential component of mammalian plasma membranes where it is required to establish proper membrane permeability and fluidity.1  Within the plasma membrane, cholesterol has also been implicated in cell signaling processes.2 Changes in the organization of membrane lipids can have profound consequences on cellular functions such as signal transduction and membrane trafficking. 3, 4

However excessive levels of dietary cholesterol in blood circulation are strongly associated with progression of atherosclerosis which leads to cardiovascular diseases.5 - 8

Hypercholesterolemia is a risk factor for non-insulin-dependent diabetes, osteoarthritis, some types of cancer, and certain reproductive and metabolic disorders. 9 It is also associated with disturbance in the hormonal milieu that can affect the reproductive system, which is clear in women who present reproductive disorders when obese.10, 11 However, in men this relationship is poorly characterized, due to the lower number of studies in the literature.12, 13

In recent years, some studies have associated the body mass index (BMI) with reproductive parameters in men, showing that increased BMI is related to poor semen quality14, decreased sperm concentration,15 decreased normal-motile sperm cells and increased DNA fragmentation index.16 Experimental animals fed with saturated fat-enriched diets raise their plasmatic cholesterol levels and this would have impact on the cell-specific lipid equilibrium between cholesterol and phospholipids that organize the plasma membrane.

The later modification could affect cellular functions as signal transduction pathways coupled to membrane cholesterol. Sperm membrane lipids are highly responsive to dietary manipulation.17 Lipid peroxidation is an important factor that may induces morphological changes in the spermatozoa.18

Cholesterol-rich diets have been shown to produce a decrease in sperm kinetics,19 and detrimental effects on leydig and sertoli cell secretory capacity in rabbits.20 Moreover, previous works showed that human male infertility might be associated with altered lipid metabolism in seminal plasma.21 The present study aimed at investigating the effects of diet induced hypercholesterolemia on rat’s sperm morphology.

Ethics statement: The animal studies described here were reviewed and approved by the Institutional animal ethical committee of KVG Medical College, Sullia. As per the guidelines of Committee for the control and supervision of experiments on animals (CPCSEA) and Animal Welfare Division.

Experimental Groups and Study Design: After the acclimatization period 24 Male Wistar rats(170-220gm) were randomly divided into two groups. Experimental (18 rats) and control (6 rats) groups The experimental  groups animals were given  pure cholesterol and cholic acid with 2:1 ratio  daily once, orally with the help of oral  gavage for 30 days. First treatment day with cholesterol was considered treatment day 1. Body weight of each rat was noted down end of every week. Control group of animals received normal diet and water only. After 24 hrs of last treatment, on 31st day the animals were sacrificed by cervical dislocation. Thorax was opened and heart exposed and blood sample was collected by cardiac puncture. Portions of blood sample were centrifuged and plasma were separated and used for determination of TBARS level. Estimation of Lipid peroxidation marker-  Thiobarbituric acid reactive substances (TBARS) levels in the plasma were determined by the method  described by Okhawa et al.23

The remaining blood was allowed to clot in a test tube and serums were collected. The serum was used to determine the total cholesterol (TC), triglyceride (TG) and high density lipoprotein (HDL) levels enzymatically, using commercially available kits E-Coline (Merck). Very low density lipoprotein (VLDL) and low density lipoprotein (LDL) levels were estimated indirectly by using the formula: VLDL = TG/5, LDL = TC - HDL -VLDL. Simultaneously, the epididymis and testis were carefully removed and weights were noted. One epididymis from each rat was used for sperm count and sperm morphological examination.

Sperm Morphology Assay: The assay were conducted by the methods reported by D‘Souza et al.24 Left epididymis was cut into small pieces with 1ml PBS (Phosphate Buffer Saline, pH 7.2) and suspension were prepared after filtering the buffer solution with 80 micron nylon mesh, this suspension were stained with (10:1) eosin Y and smears were made on the cleaned glass slides, these slides were used to evaluate the sperm morphology. From each slide two hundred sperms were examined with 200/400X magnifications.

Epididymal Sperm Count: The epididymal sperm count were conducted by the procedure described by D‘Souza et al.25 The same suspension was used for the sperm count analysis. It was calculated with the help of haemocytometer. The suspension was pipette out up to 0.5 marks and diluted with the buffer solution up to 11 marks. The dilution factor was 1:20. After charging, all 8 square (1mm2) were counted. Total sperm count/ epididymis were determined by multiplying with 5x106.

Statistical Analysis: All the data was expressed as Mean ±SEM. Analyzed by using one - way ANOVA, followed by Bonferoni post – hoc test. The statistical test was obtained from statistical package of social sciences (SPSS) version 19, 2007. Values of P<0.05 were considered as statistically significant.

Changes of Body Weights: As shown in the Table 1, feeding normal rats on basal diet supplemented with different doses cholesterol and cholic acid for four 30 days, highly significantly (p<0.001) increased body weight as compared to the control rats in the 0.5% and 1% cholesterol fed groups. In the 0.25% cholesterol fed group, body weight was increased significantly (p<0.05) as compared to the control group animals.

Changes of Reproductive organ weights: Table 2 showed that the testis weight and epididymal weight were decreased in all the cholesterol fed groups animals, but no significant changes were noticed as compared to control group rats.

TABLE 3: EFFECT OF LIPID PROFILE IN CONTROL AND EXPERIMENTAL GROUPS

TABLE 4: EFFECT OF HYPERCHOLESTEROLEMIA ON SPERM COUNT AND SPERM MORPHOLOGY 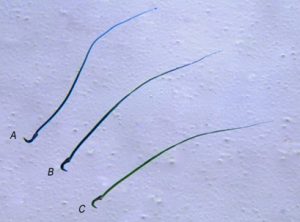 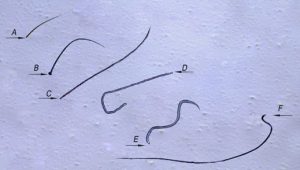 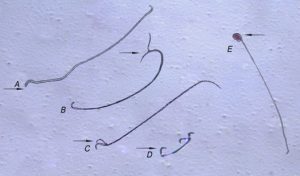 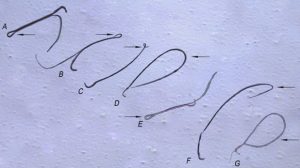 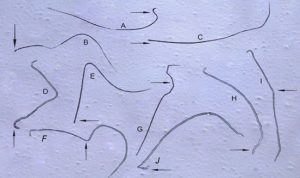 DISCUSSION AND CONCLUSION: Cholesterol the precursor of all sex steroid hormones, has a pivotal function in all areas of male and female reproductive physiology, from sex differentiation to gamete production. 26 It is believed that with the increasing prevalence of sedentary lifestyles and dietary changes, hypercholesterolemia is emerging, in turn, as an important cause of adverse health outcomes, including male infertility.27

Data from different population studies show an inverse relationship between BMI (body mass index) and fertility. 28 Although the mechanism by

which fertility is affected is still unclear. 29 The high-fat diet used in the present study was effective in promoting hypercholesterolemia, as demonstrated by an increased lipid levels in association with a higher body weight. This phenomenon favors the deposition of lipids such as triacylglycerol in adipose tissue, leading to an increase in body weight. 30, 31An important sperm parameter for evaluating male fertility is sperm morphology because it may indicate cytotoxic events. 32 The morphological alterations in hypercholesterolemic animals indicate a high probability of adversely affect spermatogenesis.

It has been reported that phospholipids and fatty acid composition of spermatozoa are altered in men with infertility.33 It has been very difficult to pinpoint a strong correlation between the serum lipids concentrations and variations in seminal parameters. The lipid composition and testicular function in mammals showed high lipid levels exerted direct adverse effects at the testicular levels. 34

Another study showed that high lipid levels were common in patients with azoospermia. The incidence of hypercholesterolemia and hyper trigleceridemia among infertile men is 65%. 35 There was a correlation between abnormal semen quality with high levels of cholesterol and triglyceride. Our results showed that high level of triglyceride and cholesterol were related with abnormal sperm morphology. Triglycerides, which are metabolic energy sources in spermatozoa, have substrates to produce glycerol in mature mammalian sperm.

However, elevation in triglycerides concentration may have deleterious effects on spermatogenesis. Hypercholesterolemia and hypertrigleceridemia was related with decreased capacity of sperm acrosome reaction in rabbits. 36 Hyper cholesterolemia also may have a detrimental effect on sperm capacity to penetrate and fertilize oocytes in rabbit.37 It has been shown that epididymal dysfunction in hypercholesterolemic animals may have detrimental effects on the cytostructural modifications and biochemical changes that occur during sperm epididymal maturation and may result in increase sperm morphometric abnormality.38

In conclusion, the results showed that the serum lipids are adversely related with sperm physiology in hypercholesterolemic rats. The molecular pathways involved thus need further investigation and could yield new insights into the concept of lipid-related sperm maturation.

Further studies with unexplained etiology will help to elucidate the underlying mechanism and probably lead to therapeutic options. This subject needs further investigations, in complement of the research made on the testis, and this field of research will without any doubt bring new insights in the understanding of the complex outcome of male infertility, a point emphasized by the growing proportion of males in their reproductive age, with dyslipidemia, having difficulties to conceive. In conclusion, diet induced hypercholesterolemia results in elevated oxidative stress and affects the sperm parameters in a negative way possibly affecting the fertility of male population. Clinical studies on obese males may support these findings.

ACKNOWLEDGEMENT: We thank our colleagues from KVG Medical College who provided valuable insight and expertise that greatly assisted this research work. We thank to KVG Ayurveda Medical College for supporting us during the hibiscus flower extraction procedure.

CONFLICT OF INTEREST: The authors are declared that there is no conflict of interest exists.