ABSTRACT: Curcumin has been shown to inhibit the activation of nuclear factor-κB (NF-κB), which is closely linked to chemo-resistance, in multiple myeloma cells. Malignant cells of this kind typically develop progressive multidrug resistance. Our aim was to investigate new possibilities for overcoming this resistance by suppressing cell signaling pathways. MTT-dye reduction assay was used to evaluate the cytotoxic activity of degrasyn, curcumin and Arsenic (ATO) on U-266, RPMI-8226 cell lines. Carfilzomib served as reference drug. Western blot analysis was performed. In RPMI-8226 cells evident activation of caspase 3 by ATO was seen. PARP cleavage was detected after degrasyn treatment. Curcumin led to PARP degradation as well. Caspase 9 was found to be activated by ATO, degrasyn and Carfilzomib. LC3b (autophagy hallmark) level was increased after exposure to ATO, curcumin and degrasyn. In U-266 cells significant LC3b increase was recorded after carfilzomib treatment. Procaspase 9 was cleaved after curcumin usage. Degrasyn activated procaspase 3. Elisa test was performed. All substances showed inhibition of NF-κB p65 fraction in both U-266 and RPMI-8226 cell lines. Proteomic analysis was performed with Curcumin and Arsenic in U-266 cell line. Significant up regulation of pro-apoptotic proteins was seen, evident down regulation of anti-apoptotic pathways was visible as well. Taken together our data showed that all studied compounds induced different forms of cell death. Despite both cell lines RPMI-8226 and U-266 originate from patients with multiple myeloma they substantially differ in their pattern of induced cell death, which could be explained by the essential heterogenicity of this specific NHL malignancy.

INTRODUCTION: Multiple myeloma (MM) belongs to a group of anti-neoplastic diseases known as Non-Hodgkin’s (NHL) lymphomas 1. It is the second most common hematological malignancy responsible for around 15% to 20% percent of deaths of all hematological cancer and around 2% of deaths from all cancers 2.

Recent improved understanding of the pathogenesis of myeloma has led to the development of new treatments such as proteasome inhibitors and angiogenesis modulators but this NHL malignancy is still incurable. The malignant cells of MM, plasma cells, and plasmolytic lymphocytes are the most mature cells of B-lymphocytes.

B-cell maturation is associated with a programmed rearrangement of DNA sequences in the process of encoding the structure of mature immunoglobulins. It is characterized by overproduction of monoclonal para-proteins, which are involved in irreversible skeletal and renal damages. MM has a progressive course, related to the development of highly resistant neoplastic disease. Nuclear factor-κB (NF-κB) is closely linked to prolonged survival rate due to interleukin and growth factor indipendce from the bone marrow. These factors also contributed to increased chemo-resistance in multiple myeloma to established agents like Bortezomib 3.

Curcumin is a yellow colored substance isolated from the plant Curcuma longa (Zingiberaceae). Efficacy of curcumin was evaluated in 29 patients with multiple myeloma and lowering level activated of NF-κB was reported in all participants 4. The word Arsenic originated from Middle East and literally means “yellow gold”. As2O3 (ATO) acts directly on MM cells at relatively low concentrations, which effects survival and apoptosis of MM cell lines U-266 and RPMI-8226. In both cell lines ATO achieves NF–κB inhibition. The mechanism of action of degrasyn, a small molecule derived from a compound with Janus-activated kinase 2 (JAK2) kinase inhibitory activity. It induces rapid accumulation of polyubiquitinated (K48/K63-linked) proteins into juxtanuclear aggresomes, without affecting 20S proteasome activity 5. Our aim is to reveal mechanism of different cell death induction by curcumin, arsenic-trioxide, degrasyn, and carfilzomib in human multiple myeloma cell lines. Their role in achieving modulation of apoptotic and anti-apoptotic proteins including inhibition of (NF-κB) which is a vital step in the search of a new perspective drugs candidate for MM.

Cytotoxicity studies: The cytotoxic activity of all substances was evaluated against RPMI-8226 and U266 cells. The cells were cultivated in RPMI-1640 medium supplemented with L-bovine serum (10 % final concentration). For the experiments, logarithmically growing cells were seeded in 96 flat bottomed tissue culture plates (100 µL cell suspension per well at a density of 3 x 105 cells per mL). After 24 h cultivation under standard conditions (37 ˚C under a humidified atmosphere with 5 % CO2), stock solutions were added in order to obtain the final concentrations of curcumin, arsenic trioxide, degrasyn, and carfilzomib, which were indicated in the results. The incubation time was 48 and 72 h. After the exposition to the substances, MTT-dye reduction assay was performed. Briefly, 10 µL of the MTT-solution was added to each well and the plates were further incubated for 4 h at 37 ˚C. Later, Formosan crystals were dissolved by the addition of 5 % formic acid in 2-propanol and absorption was measured at 540 nm using a computerized ELISA reader.

Proteome Profiler Array: Proteomic kit was purchased from R & D system Europe LTD with catalog number ARY 009. Celllysates from RPMI-8226 and U-266 cell lines were diluted and incubated overnight with the Human Apoptosis Array. The array was washed to remove unbound proteins, followed by incubation with a cocktail of biotinylated detection antibodies. Streptavidin-HRP and chemiluminescent detection reagents were applied, and a signal is produced at each capture spot corresponding to the amount of protein bound.

NFκB p65 ELISA Array: NFκB p65 ELISA kit was purchased from Enzo Biochem Inc with catalog number ADI-EKS 446. The NFκB p65 EIA kit provides a sensitive, rapid and reliable method to measure the active form of NFκB p65. The assay uses streptavidin-coated plates with bound NFκB biotinylated-consensus sequence to capture only the active form of NFκB. The captured active NFκB is incubated with a specific NFκB p65 antibody, which is then detected using an HRP conjugated secondary antibody. First working binding buffer was added to the 96-well plate, than cellular extracts (cell count between 2.10 6 - 3.10 6 per mL) were incubated for 1 h. Washing three times with 200x washing buffer was performed than primary antibody was added for 1h period. Probes were washed again Secondary antibody was added and an hour later chemiluminescent substrate was piped into the probes and luminescence measured at Beckman Coulter, DTX 880 using specific chemiluminescent protocol for 96 wells plates.

RESULTS AND DISCUSSION: Curcumin induced cell death detected with MTT-assay after 48 and 72 hours after treatment in RPMI-8226 and U-266 cell lines, degrasyn showed promising cytotoxic potential against myeloma cells as well. IC50 values are showed at Fig. 1. 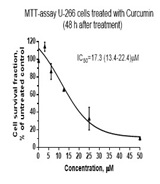 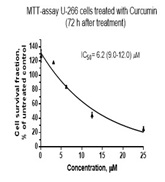 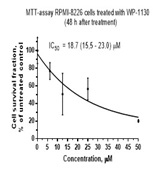 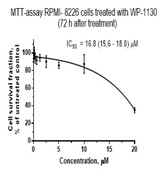 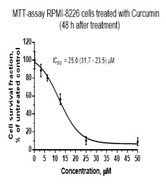 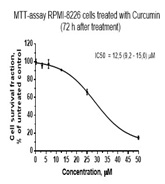 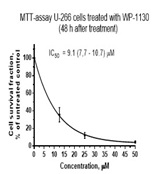 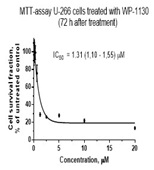 Antimyeloma potential of Arsenic (ATO) was evaluated against a well-established drug such as Carfilzomib 6. Cytotoxicity of those substance were determinated after 48 and 72 hour to U-266 and RPMI-8226 cell lines.  IC50 values are showed at Fig. 2.

Western blot analysis was performed with whole cell lysates after 48h of treatment from MM cell lines U-266 and RPMI-8226 in order to investigate the anti-cancer potential of curcumin, degrasyn (WP1130), Arsenic (ATO) and Carfilzomib (serve as referent substance). Our findings are represented at Fig. 3 and Fig. 4. In U-266 cells significant LC3b increase was recorded after carfilzomib treatment. Procaspase 9 was cleaved after curcumin usage. Degrasyn activated procaspase 3. In RPMI-8226 cells evident activation of caspase 3 by ATO was seen. PARP cleavage was detected after degrasyn treatment. Curcumin led to PARP degradation as well. Caspase 9 was found to be activated by ATO, degrasyn and Carfilzomib. LC3b (autophagy hallmark) level was increased after exposure to ATO, curcumin and degrasyn. Activation of NF-Kb was observed for all tested substances in both myeloma cell lines. 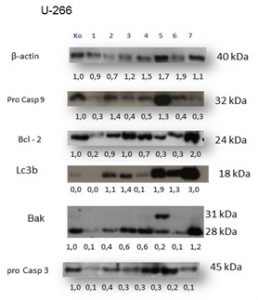 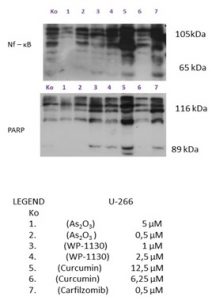 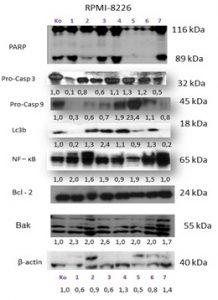 Elisa test was performed. All substances inhibitory activity of NF-κB p65 fraction in both U-266 and RPMI-8226 cell lines were evaluated at Fig. 5 after western blot testing the ability of curcumin, degrasyn, arsenic and carfilzomib to influence NF-κB, decision was made to further investigate specific fraction of p65 NF-kB. After 48h of treatment most evident p65 fraction suppression was in RPMI-8226 cell line treated with ATO, curcumin and WP1130. In U-266 cell line most potent suppression was visible by curcumin and carfilzomib which correlates well with western blot findings 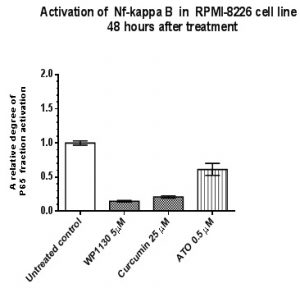 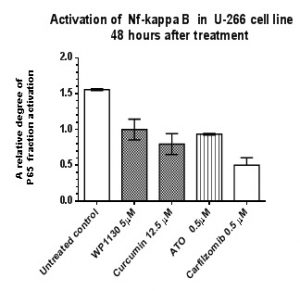 After promising modulation of apoptotic pathways (cas-3 and cas-9) in western blot analysis was seen, decision was made to perform Proteomic analysis with curcumin and arsenic in U-266 cell line was taken. Further protein modulation by curcumin and ATO has been investigate. Significant upregulation of pro-apoptotic proteins was seen. Increasing in Bad and Bax proteins concertation, activation of TRIAL/DR4, FADD, receptors Hsp-60 and cleaved caspase-3 was visible. Those results correlate with existing literature. Evident downregulation of anti-apoptotic pathways was visible as with immunoblot finding 7. Results from proteomic array showed substantial decrease in anti-apoptotic proteins Bcl-xl, CDKN1A, Livin and Hsp protein family induced by curcumin8. 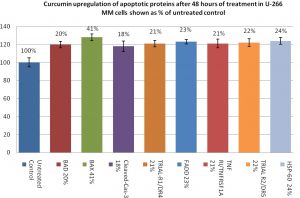 FIG. 6: PROTEOMIC ARRAY PERFORMED AFTER TREATMENT WITH CURCUMIN, 48 H OF U-266 CELL LINE

FIG. 7: PROTEOMIC ARRAY PERFORMED AFTER TREATMENT WITH CURCUMIN, 48 H OF U-266 CELL LINE 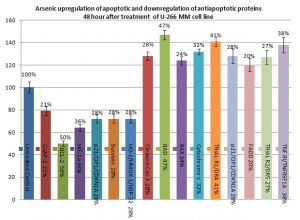 FIG. 8: PROTEOMIC ARRAY PERFORMED AFTER TREATMENT WITH ARSENIC, 48 H OF U-266 CELL LINE

CONCLUSION: Both inhibitors of the proteasomal function, namely degrasyn and carfilzomib inhibited the cell growth of human MM cell lines U-266 and RPMI-8226 in a concentration dependent manner. The compounds of plant origin curcumin showed promising antimyeloma activity in vitro as well. Inhibition of the p65 NF-κB transcription factor activation was evidenced after treatment with curcumin, degrasyn, ATO and carfilzomib. Western blot analysis revealed in RPMI-8226 and U-266 cell lines evident activation of caspase 3 by ATO. PARP cleavage was detected after degrasyn treatment. Curcumin led to PARP degradation as well. Caspase 9 was found to be activated by ATO, degrasyn and Carfilzomib. LC3b (autophagy hallmark) level was increased after exposure to ATO, curcumin and degrasyn. In U-266 cells significant LC3b increase was recorded after carfilzomib treatment. Procaspase 9 was cleaved after curcumin usage. Degrasyn activated procaspase 3. Proteome array revealed interesting activation of FADD receptor, Bad, Bax proteins by both curcumin and arsenic. Significant downregulation of anti-apoptotic proteins: Survvin, Livin, Hsp-32 was evident as well. Taken together experimental findings indicate that all tested compounds have promising potential as therapeutic agents for multiple myeloma and were able to induce apoptotic changes and NF-κB inhibition.