Adventitious bud regeneration from internode explants of Mentha viridis L. was achieved shoots from nodal segments grown in vitro, were cut in to pieces and uses as sources of explants.  Organogenesis was induced from internodal explants cultured on Murashige and Skoog (MS) medium containing different combinations of 6, Benzylaminopurine (BAP) and Kn under 16 hr photoperiod and at a temperature of 22 ±2 Co.  The types of explants markedly influenced organogenesis and growth of the regenerated shoots.  The regeneration frequencies were high in intermodal explants.  The percentage of responsive in internodal explants producing from 20 to more than 91.  BAP 3.5 mg/l induced the highest regeneration rate 91% and also get results of KN 3mg/l, regeneration rate 81 after 20d of culture.  Yielding 36.7±1.14 shoots per responsive internode explants.  The regenerated shoots from the best induction treatment were transferred to a fresh medium without plant growth regulators for 30d.  Finally the elongated shoots were separated and transferred on to MS medium supplemented with (IBA, 1.5 mg/l).  Rooted plantlets (90%) were successfully transferred to soil in cups with an 80% survival rate.

INTRODUCTION:Mentha viridis L. which belongs to the family labiateae is commonly known as spearmint and in India as “Pudina” 1.  The leaves are well recognized for making an herbal tea and for using in the preparation of folk medicine 2, 3.  A tea made from the leaves has traditionally been used in the treatment of fevers, headaches, digestive disorders and various minor ailments.  The herb is antiemetic, antispasmodic, carminative, diuretic, restorative, stimulant and stomachic.

Derived spearmint oils are used for the manufacture of food confectioneries and pharmaceuticals 4.  The plant is known to be endowed with variety of biological properties due to the high content of secondary metabolites 5. It was found anti-allergic 6, anti-oxidant 7, anti-okateket 4, anti-cytotoxic 8 and chemo-preventive 9. The essential oil in the leaves are antiseptic, though it is toxic large doses. Both the essential oil and the stems are used in folk remedies for cancer.  A poultice prepared from the leaves in said to remedy tumors.

In the present communication, a reliable and reproducible protocol for in vitro plant regeneration from internodal explants. This can be exploited to raise transgenic plants using vector-mediated/direct gene delivery approaches.

Statistical Analysis: Each treatment consisted of 15 explants, and the experiment was repeated three times.  The explants were arranged randomly on the shelves in the growth room.  The results presented are the means of the replications with the standard error (±SE).  The number of shoots is presented as the mean number of shoots regenerated per morphogenic explants.  Regeneration rate is expressed as the above percentage of internodes that differentiated shoots over total number of internodes.

TABLE 1: EFFECT OF DIFFERENT CONCENTRATIONS OF BAP AND KIN IN MS MEDIUM FOR MULTIPLE SHOOT INDUCTION FROM INTERNODAL EXPLANTS OF MENTHA VIRIDIS L.

Among the concentrations tested the best response was noticed with 3.5 mg/l BAP. Normally, other species Mentha spp. shows good response towards plant regeneration is MS medium in the presence of BAP combine with auxins as reported by various author 11, 12.  After 3 to 4 weeks, when regenerated shoots reached a length of more than 11 cm, they were transferred in to MS medium containing IBA or IAA (table 2).  In cultures, the shoots were inoculated on auxins supplemented medium, where as root primordia emerged from the shoot base on first week of culture on auxins-suplemented medium. Maximum root lengths (2.65±0.67) were produced from IBA at 1.5 mg/l (Fig. 1d).

TABLE 2. EFFECT OF DIFFERENT CONCENTRATIONS OF IBA AND IAA IN MS MEDIUM FOR ROOT INDUCTION FROM SHOOTS OF MENTHA VIRIDIS L.

For acclimatization, plantlets were removed from rooting medium after three weeks of incubation and transferred to cups containing sterilized substrate made of sand, red soil and manure in the ratio of 1:1:1.  The plants were maintain humidity and were kept under culture room conditions for one week.  After three weeks, the plantlets were transferred to greenhouse under shade until growth was observed.  Then they were planted under normal garden conditions (Fig. 1e). 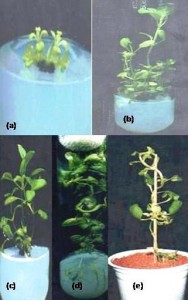 CONCLUSION: Direct shoot multiplication is preferred for generating true-to-type plants than callus regeneration.  This study supports the rapid multiplication of these useful medicinal plants by In vitro conditions.  This report provides a simple protocol for the micro propagation of Mentha viridis. Shoots can be easily derived from internode cultures on BAP containing medium and subsequently rooted on IBA containing medium.  The efficiency of the system could be improved to give rise to more shoots proliferation.  This approach offers a means for producing identical plantlets form internode explants of Mentha viridis.