ABSTRACT:Starch was extracted from the grains of finger millet (Eleusine corocana), by steeping in water for 24 hours. The extracted starch was used as a disintegrant, at the concentrations of 2.5-12.5%w/w to compressed paracetamol tablet in comparism with maize starch BP. Results show that, there is no significant difference in the disintegration time or dissolution rate of tablets containing the two starches. Tablets containing Eleusine corocana  met  compendia requirements for  disintegration time and dissolution rate. The starch is recommended as a disintegrant in tablet formulation.

INTRODUCTION: Starch is a widely used material with various applications in the Pharmaceutical, food and textile industries. Its uses are based mainly on its adhesive`, thickening, gelling, swelling and film forming properties 1. The high demand for starch places a tremendous pressure on the few known official sources and propels efforts for continuous exploitation of local plants in search for a viable newer source of starch. There are many botanical species in Nigeria that can serve as sources of starch for use in Pharmaceutical industry. Some of this species have already been investigated 2, 3, 4.

The grain Eleusine corocana, that bears a Hausa name Tamba, is expected to contain starch. Starch is obtained from the grains of Eleusine coracana, family poaceae 5.

Method: The grain was thoroughly washed to remove all foreign particles. Washed grains were steeped in water for 24hrs at room temperature and the steeped grains were crushed using blender (Magic blender, SG300D, Japan). The resulting pulp was added with enough quantity of water and was passed through a calico sieve. The slurry was allowed to settle and 0.1N Sodium Hydroxide was added to it to separate starch and protein materials as well as neutralized the slight acidity. Excess Sodium Hydroxide was removed by washing several times with water. The clean   supernatant was decanted while the sediment was collected on a tray and air dried. Using pestle and mortar, the dried starch lumps were ground and the powder was passed through 250 micro meter (Muazu 2007)

Preparation of Paracetamol Granules: Using the wet granulation method of massing and screening and the formula shown in tables 1 with different disintegrant concentrations, the granules were prepared as follows.

TABLE 1: FORMULA FOR THE DISINTEGRATION PROPERTIES OF ELEUSINE COROCANA AND MAIZE STARCHES IN PARACETAMOL TABLETS

Compression of Granules: Appropriate amount of external disintegrant and lubricant/glidant were added (as shown in the above table).

Disintegration and Dissolution tests: The disintegration time of Eleusine corocana starch formulation was observed to be longer than that of Maize starch (Fig. 1). 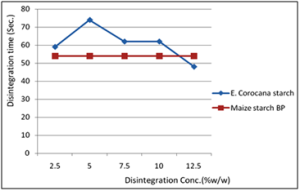 FIG. 1: EFFECT OF DISINTEGRANT CONCENTRATION ON THE DISINTEGRATION TIME OF PARACETAMOL TABLETS CONTAINING THE STARCHES

For a drug to be absorbed from a solid dosage form after oral administration it must first be in solution and the first important step towards this condition is usually the breakup of the tablet, a process known as disintegration 6, 7.

It has been reported that penetration of water into a tablet is proportional to its mean pore diameter or porosity 8, 9. Generally, short disintegration times are associated with rapid fluid penetration 10, 11.

For dissolution, Fig. 2 & 3 shows the results of the dissolution rate of Paracetamol tablet formulated from different concentration of Eleusine corocana and Maize starch disintegrant. 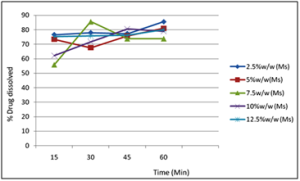 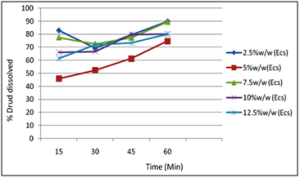 The details of the percentage of drug dissolved at various disintegrant concentrations for the different batches are shown in table 3. The results show that at all the concentrations, more than 75% of the drug was dissolved except at concentration 5 & 7.5%w/w for Eleusine corocana and maize starch respectively.

The Carr’s index of both Eleusine corocana and Maize starches are below 25 which is considered to be an indication of good flowability, hence good compressibility (table 4).

TABLE 3: EFFECT OF DISINTEGRANT CONCENTRATION ON SOME PHYSICAL PROPERTIES OF PARACETAMOL TABLETS