DIVERSITY OF MOLLUSCAN FAUNA FROM FRESHWATER BODIES OF SANGLI DISTRICT: A COMPREHENSIVE STUDY IN RELATION TO ENVIRONMENTAL VARIABLES

DIVERSITY OF MOLLUSCAN FAUNA FROM FRESHWATER BODIES OF SANGLI DISTRICT: A COMPREHENSIVE STUDY IN RELATION TO ENVIRONMENTAL VARIABLES

INTRODUCTION: Aquatic ecosystem is the most diverse in the world. Benthic macro invertebrates are common inhabitants of fresh water bodies as they transfer energy through food webs 1. Among invertebrate diversity molluscs constitute the second largest phylum next to arthropods. Many molluscan species are also good bio-indicators for water quality or pollution on the basis of their tolerance power against extremes of physico - chemical components of water 2, 3, 4. Molluscs are found to be important economically, medicinally and ecologically 5. The biological communities that are exposed to pollutants act as integrators of multiple past and present environmental effects in any ecosystem.

All attribute makes them suitable to act as bioindicators 6. Molluscs occupy a prominent place among aquatic organisms suitable for biological monitoring 7. Scientists have reported that, certain gastropods and pelecypods were ideal bio-indicators for trophic stages (eutrophic, mesotrophic and oligotrophic) of lakes as well as for lotic environments 8, 9, 10. Clarke attempted  to  show  the  utility  of molluscs  in  primary  classification  of  the  lakes  in  their various  trophic  stages. Freshwater macro invertebrates are  used for  lake  monitoring  and  different  indexes  were prepared to assess the ecological  status  of  lentic ecosystems.

Benthic  macro invertebrates  constitute  an  important part  of  aquatic  organisms  in  aquatic  environments. At present aquatic organisms are exposed to anthropogenic disturbance as well as natural changes in their habitats which are to be responded in various ways. Therefore, aquatic organisms also have an important role in biomonitoring 11, 12.

Rao and Dey and Garg et al. studied a correlation between the molluscan diversity with physiochemical parameter with effect of water from Ramasagar reservoir located in north way site of Dhatia city, Madhya Pradesh17, 18. Piola and Johnston studied the influence of pollution on the native diversity of invertebrates of new southwales, Australia19. They may be used to understand the response, adaptation and recovery of an ecosystem and its inhabitants to both natural and anthropogenic disturbances. Molluscan fauna can be investigated  from several perspectives, i.e. zoological diversity, biogeographical distribution, palaeontology, veterinary, agricultural plagues, invasive exotic species, conservation, as an alimentary resource (fishing and malacoculture), as bio-indicators of environmental quality and, last but not least, as a health hazard (as vectors or transmitters of human parasitic diseases). Molluscs are also found economically important as some of them are edible. The soft bodies of molluscs are used as a medium for fishing in the form of bait, hard shells are used for making various items such as buttons, decoration of door curtains, knife handles, ornaments etc. also used in the form of poultry food20.

Molluscs showed appropriate position among local invertebrate biodiversity. Taking in to account present study designed to investigate the molluscan biodiversity changing with seasonal physicochemical parameters. Many researchers have studied the molluscan diversity 21 to 26.

Sampling and analysis of water:

Water samples were collected at morning 9.00 am to 10.00 am for physicochemical analysis by monthly intervals in the period of January, 2011 to December, 2013.  Physicochemical parameters such as temperature, pH, Total alkalinity, Turbidity, Chloride, Hardness, CO2, DO, Calcium and Phosphate were analyzed regularly during all the three seasons by following the standard methods 27, 28. Stastiscal analysis of data was made by Standard deviation and Standard Error. Finally readings were interpreted to find out pollution status in the lake.

Molluscan species were collected by simple hand picking method, with the help of forceps and containers from all along the marginal area. Samplings were carried out up to depth of 1 to 2 meters from water level. Stratified random quadrate sampling method was applied for quantitative assessment of molluscan fauna at selected sampling stations29. However, five replicates at each sampling stations were performed to overcome the problem of random sampling. All the species were carried to laboratory, cleaned neatly and used for identification. Identification of animal was done by using standard keys of Zoological survey of India.

Statistical analysis of quantified data was carried out by calculating various indexes as Shannon-Weaver Index, Simpson Index, and Evenness Index30 to interpret species richness, species abundance. All the variables were statistically analyzed and graphically interpreted. 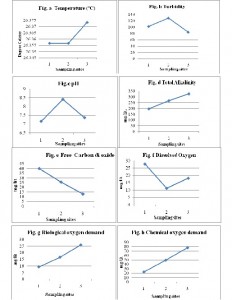 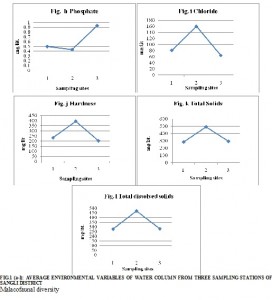 1.94 and 1.95 respectively. Evenness shown at three sites was 0.9, 0.8 and 0.8 respectively. Among the three sites Mhaishal lake showed least abundance as compared to Krishna river and Brahmanath lake may be due to human interference and pollution level. (Fig.2) 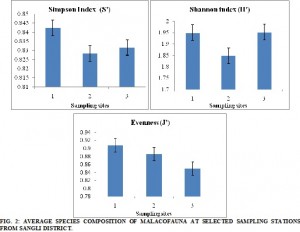 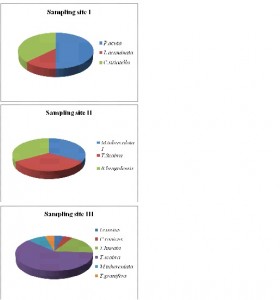 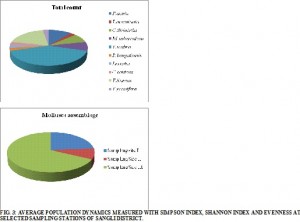 DISCUSSION: The Molluscan populations are good indicators of localized condition, indicating water quality. They also play important roles in the ecosystem structure and biodiversity. Harman has also pointed out that molluscs are bioindicators of freshwater pollution. Garg studied a correlation between molluscan diversity with physicochemical parameter with affect of water from Ramsagar reserviour. Researchers haves studied sewage pollution impact on microzoobenthic from Kalpi river31. Among the three seasons the molluscan species shows lower diversity in mansoon season as compared to summer and rainy season 32.

Species diversity, richness and abundance of molluscan fauna are greatly affected by fluctuation brought about by physicochemical parameters in the water body. Average temperature recorded during the study is 26ºC - 27ºC which is suitable for development of molluscan fauna. A positive corerelation between molluscs and temperature was recorded33. pH ranges from 7.1 – 8.4 which is neutral to acidic and was suitable for molluscs. However, a very weak and insignificant negative correlation between molluscs and pH recorded by Garg and suggests that molluscs were found to be independent of fluctuations with respect to pH value. Total alkalinity has a significant correlation to the population of molluscs. 34 Sakhare and Joshi also supported this point of view by observing the greater molluscan population in alkaline lakes as compared to acidic lakes. CO2 and DO were within the limiting range some molluscs can also survive in very low oxygen conditions 35. High DO and less CO2 are favourable for development of molluscs.

Total Solids, Total Dissolved Solids, and Phosphate show negligible effect on molluscan diversity. However, a positive correlation of chlorides with the gastropods suggests that the chloride content of the water body may favour their survival. Among the three sites Khanderajuri lake showed maximum diversity and population of molluscs as compared to Krishna river site and Mhaishal lake site as it shows sandy shore due to which it is rich in calcium which is favourable for molluscan shell growth. Tonapi, documented richness of molluscs observed due to high calcium content and macrophytic vegetation which provide food and shelter 36. Several authors showed that calcium concentration is an important factor in controlling the abundance and distribution of molluscs in freshwater37, 38, 39, 40, 41.

ACKNOWLEDGEMENTS: Authors are thankful to UGC. SAP (DRS) Phase – I and head, Department of Zoology, Shivaji University Kolhapur for providing necessary facilities in the progress of work.