Bacopa monnieri Linn. is an important medicinal plant belonging to family scrophulariaceae. Bacopa is a neurotonic, immuno-modulator, tranquilizing, memory and learning enhancing, cerebral activator, anti-ulcer, antispasmodic, anti-asthmatic. It is also used in Epilepsy, anxiety and depression. Major component of Bacopa are saponins Bacoside A and Bacoside B. The cell suspension culture of Bacopa  monnieri was treated with 0.2%, 0.6% and 1% concentrations of DMSO (Dimethyl sulphoxide), a cell permeabilizing agent for 3 and 6 hours. The samples were analyzed for the content of bacoside A using HPTLC technique to identify and quantify the amount of released product. Maximum release of bioactive compound, Bacoside A was observed (4.6±0.02µg/mg) in suspension culture treated with 1% DMSO for 3 and 6 hrs treatment durations compared to control (2.1±0.05 and 3.2±0.01, respectively).

INTRODUCTION: Natural products have been used in the treatment of various human ailments. The most important and oldest treaties of Indian medicine system (i.e., Ayurveda) are Charak Samhita (1000 B.C) and Sushruta Samhita that describes the use of more than 500-700 medicinal herbs. Today plants have contributed more than 7000 different compounds which are useful as heart drugs, laxatives, anti-cancer agents, hormones, anti-parasitic compounds etc. Worldwide extensive screening programs are being carried out to identify chemical compounds from plants that may provide new treatments for various human diseases. In recent years a lot of attention has been devoted to novel molecules derived from natural sources that exhibit a good range of clinical and pharmacological activities.

The plant contains two saponins, bacoside A and B3. In addition to the bacosides, Bacopa contains a wide variety of medically active substances, including stigmasterol, sapogenins, and flavonoids 4. Other compounds include triterpenoid saponins. Bacopa also contains D-mannitol, betulic acid, beta-sitosterol, octacosane, nicotine, and amino acids such as alpha-alanine, aspartic acid, glutamic acid, and serine5.

The qualitative and quantitative improvement of biologically active compounds by in-vitro techniques has been achieved most successfully and promisingly in many medicinal plants. Large-scale production of active component from the cell culture, enhancement in the production of secondary metabolites by using chemical and biological elicitors and increasing permeability of cell by using cell permeabilization agents such as Triton-X-100, DMSO, and Tween-80 for the maximum release of active metabolites, are an exciting aspect in scaling up technology of natural metabolites 6. It has been successfully experimented for the compounds like Cardio active glycosides in Digitalis purpurea, L-Dopa in Mucuna pruriense, Vinca alkaloids in Catharanthus roseus, Berberine in Coptis japonica, diosgenin in Dioscorea deltoidea and capsaicin in Capsicum frutescens and many more 7. The theme of the present work is to induce cell permeability for the release of bacoside A content by using cell permeabilizing agent DMSO (Dimethyl sulphoxide) in an experimental system i.e., B. monnieri.

Dimethyl Sulfoxide (DMSO) is a highly polar and water miscible organic liquid. It is essentially odorless, and has a low level of toxicity. The unique capability of Dimethyl Sulfoxide (DMSO) to penetrate living tissues without causing significant damage is most probably related to its relatively polar nature, its capacity to accept hydrogen bonds and compact structure. These properties results in the ability of DMSO to associate with water, proteins, carbohydrates, nucleic acid, ionic substances, and other constituents of living systems 8.

Preparation of Suspension Culture: 1 gm callus tissues derived from leaf explants of B. monnieri were inoculated in 50ml of suspension (liquid) medium in Dippys jar. The cultures were grown in M.S medium supplemented with 2, 4-D: BAP (1:0.5) on a rotary shaker at 250 ± 20C at 120 rpm.

The jars were agitated on an orbital shaker at 120 rpm constantly during the complete period of treatment at 25o±2oC. The control was maintained with each set of treatment. After the treatment, the cells were separated from the suspension culture by filtration using sterilized Whatmann No-1 filter paper. The cells were then washed twice with plain medium under aseptic condition in order to remove the traces of DMSO and then resuspended in fresh medium and were allowed to grow for four days. The suspension cultures were dried in oven. The dried samples were then sonicated with methanol. The sonicated samples were then evaluated for Bacoside-A release by HPTLC technique.

Sample Preparation: 200 mg of the dried samples were sonicated thrice for 15 min in 2 ml methanol each and were collected in a volumetric flask. The final volume was made up to 10 ml using methanol. This solution was filtered and was concentrated to 2ml. This sample was further used for analysis. Standard bacoside A sample was run along with the treated samples.

The plates were developed in a twin chamber which was saturated with 22 ml mobile phase for 30 min at room temperature. Chromatography was performed in a controlled humidity chamber with relative humidity at 40% and the plate was dried in air and photographed. The TLC plates were sprayed with 5% H2SO4MeOH, heated at 110oC and subjected to scanning, the absorption spectra were recorded at start, middle and end position of the band. The plates were scanned in CAMAG TLC Scanner3 at 500 nm using CATS 4 software. The slit dimensions were adjusted at 4 mm × 0.30 mm with fixed scanning speed at 20 mm s−1.  The peak areas were observed and recorded.

RESULTS AND DISCUSSION: The induction of the callus is the initial step of this experiment. The cell suspension culture prepared from the callus is treated with various concentrations of DMSO for different time durations. The selected experimental system Bacopa monnieri revealed good response for callus induction in MS media supplemented with different hormonal combinations. Profuse callus growth was observed in Ms media supplemented with BAP: IAA: KIN (1:0.05:0.05; 1.5:0.05:0.05) and 2, 4-D: BAP (1:0.5; 1.5:0.5). The cell suspension was treated with DMSO at exponential growth phase for effective permeabilization of cultured cells under stable condition.

In present investigation, it was observed that the DMSO treatment is positively effective in the release of target compound bacoside A (Figure 1) from Suspension culture of B. monnieri. The minimum release of the compound (2.2±0.04μg/mg) was noticed in 0.2% DMSO treatment for 3 hours; however it did not reveal remarkable impact on product release when compared to control sample i.e. 2.1±0.05μg/mg. The maximum release in 3 hours treatment was noticed in suspension culture treated with 1% DMSO. It was 4.6±0.03μg/mg which was approximately 2 fold more compared to control (Table 1). 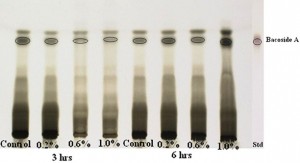 FIG. 1: HPTLC FINGERPRINT FOR BACOSIDE A IN TREATED SAMPLES OF CELL SUSPENSION CULTURES IN BACOPA MONNIERI.

TABLE 1: BACOSIDE-A RELEASE FROM SUSPENSION CULTURE TREATED WITH DMSO IN B. MONNIERI

In case of 6 hours treatment, there was good increase in the release of Bacoside A compound compared to its control in 0.2% and 1% DMSO (4.2±0.03μg/mg and 4.6±0.01μg/mg) respectively. But the quantum of release of compound in higher dose (1% DMSO) in 6 hour treatment did not reveal any change over same treatment of 3 hours duration. However, the quantity released was highest as compared to other treatments and also control. The dose of 1.0% DMSO was most favorable concentration for the recovery of studied metabolite in 3 hours and 6 hours treatment durations.

DISCUSSION: The plant cell wall and membrane barriers have to be penetrated in order to release the secondary metabolites from plant cell vacuoles. Several attempts have been made to permeabilize the plant cells for short periods. However, the main challenge is to retain cell viability. Chemical permeabilization has been described as a non destructive strategy to release secondary metabolites while retaining cell viability. Triton X-100 and DMSO did not affect viability of Catharanthus roseus cells 10.

ACKNOWLEDGEMENT: The authors are thankful to Anchrom Lab., Mumbai for HPTLC analysis.