ABSTRACT: A novel Mannich base ligand 1-(2,5-dioxopyrrolidin-1-yl) (4-hydroxy phenyl)methyl)thiourea (PSTU) and its Manganese (II) and Cobalt (II) complexes have been synthesized and characterized by elemental analysis, molar conductance measurements, magnetic susceptibility measurements, FT-IR, 1H NMR and 13C NMR spectroscopic studies. The antimicrobial activities and antioxidant activities of the free ligand and its metal complexes were also performed. The results revealed enhanced antimicrobial activities against Bacillus subtilis (gram+ive) and Escherichia coli (gram–ive bacteria) and also significant antioxidant activity. In addition, DNA binding properties of the ligand and its metal complexes have been investigated by UV-Visible absorption spectroscopy, viscosity measurements, emission spectra and gel electrophoresis, which suggest that the metal complexes act as efficient DNA binders. The results shown that the nuclease activity Co(II) complex was effective which could induce scission of pBr322 super coiled DNA effectively to linear form in presence of H2O2 as oxidizing agent.

INTRODUCTION: Metals have been used in treatments since ancient times. The Ebers Papyrus from 1500 BC is the first written account of the use of metals for treatment and describes the use of Copper to reduce inflammation and the use of iron to treat anaemia. Sodium vanadate has been used since the early 20th century to treat rheumatoid arthritis. Recently metals have been used to treat cancer, by specifically attacking cancer cells and interacting directly with DNA and in chemotherapeutics 1 - 12.

DNA is usually referred as molecule of heredity for genetic propagation of all qualities. The positive charge on most metals can interact with the negative charge of the phosphate backbone of DNA. Some drugs developed that include metals interact directly with other metals already present in protein active sites, while other drugs can use metals to interact with amino acids with the highest reduction potential. Chelation causes drastic change in the structural features and enhances the biological activities of the ligand. Many reports are available in the literature on the synthesis and characterization of metal complexes of Mannich bases 13 - 17. Phthalimides possess an imide ring which facilitate them to be biologically active and pharmaceutically useful due to their antibacterial, antifungal, analgesic 18, 19, antitumor 20, 21, anxiolytic 22 and anti HIV-1 activities.

When phthalimides is subjected to Mannich condensation, it yields Mannich bases 23 which may display very effective biological activities. Current paper describes about the synthesis, characterization of novel Mannich base ligand PSTU and its Mn(II) and Co(II) complexes. Their anti-microbial, anti-oxidant activities, DNA binding and cleavage studies have also been discussed in detail.

MATERIALS AND METHODS: All the reagents and solvents used for the synthesis of ligand and the metal complexes were AR grade of highest available purity and used as such without further purification. Elemental analysis was performed using Carlo Erba 1108 analyzer and Coleman N analyzer and was found within ± 0.5%. The molar conductivities of the metal complexes were measured in approximately 10-3 M Ethanol solution using a Systronics direct reading digital conductivity meter -304 with dip type conductivity cell. The IR spectra were recorded as KBr pellets on Perkin- Elmer 1000 unit instrument. Absorbance in UV-Visible region was recorded in DMF solution using UV-Visible spectrometer. The 1H and 13C NMR of the ligand was recorded on a Bruker instrument employing TMS as internal reference and DMSO – DMF as solvent. The mass spectral study of the ligand was carried out using LC mass spectrometer. Magnetic susceptibility measurements at room temperature were made by using a Guoy magnetic balance. Anti-microbial screening of the test compounds was carried out using Agar-well diffusion method.

Preparation of 1-(2, 5-dioxopyrrolidin-1-yl) (4-hydroxy phenyl) methyl) thiourea (PSTU): Phthalimide (1g, 0.1mol), salicylaldehyde (0.3ml, 0.1mol) and thiourea (0.5g, 0.1mol) were taken in equimolar ratio. To an aqueous solution of thiourea and phthalimide taken in the reflux condensor, salicylaldehyde is added in drops and refluxed for 3hrs and cooled in an ice bath. A white solid formed is filtered, washed with distilled water and dried in vacuum. Then the product is recrystallized from hot solution of ethanol. The percentage yield of the compound was 82%.

Synthesis of Metal Complexes: The metal complexes of PSTU were prepared by slow addition of hot methanolic solution of the metal salt with hot ethanolic solution of the ligand in 1:1 molar ratio (Fig. 1). The insoluble metal complexes were formed after 2 weeks. It was washed with methanol and ethanol to remove unreacted metal salt or ligand and then dried in an air oven at 60 °C.

TABLE 1: PHYSICAL PROPERTIES AND ELEMENTAL ANALYSIS DATA OF THE LIGAND PSTU AND ITS METAL COMPLEXES

Anti-Bacterial Activity: The ligand PSTU and the synthesized metal complexes were dissolved in DMSO and the working concentrations of the above were taken in Milli-Q water for treatment. Gram positive (Bacillus subtilis) and Gram Negative (Escherichia coli) bacteria were taken to analyze the anti-bacterial activity of metal complexes. Primarily, Minimal Inhibitory Concentration (MIC) was determined by spectrophotometer method. For that purpose, equal number of colonies (1x1010 CFU/ml) were  taken in 0.7% of sterile saline and the final concentrations of metal complexes were varied from 50µg to 400µg. 12 hour incubation was given and absorbance was taken at 600nm. 50% of reduction was calculated as MIC. Afterward, the activity of the drug was visualized by well-diffusion assay and the zone of inhibition was calculated and is shown in the Table 4. It is seen that all the metal complexes of PSTU exhibit higher activity than the free ligand against both Bacillus subtilis and Escherichia coli. The enhanced activity of the metal complexes can be explained on the basis of chelation theory 31. Chelation reduces the polarity of the metal ion and increases lipophilic and hydrophobic character of the metal chelates favouring the diffusion of the metal chelates through the cell membrane. In other words, the chelation of the metal ion leads to the breakdown of the permeability barrier of the cell wall. Hence, the permeation mechanism through the lipid layer of the microorganism becomes more effective, causing an increase in the antibacterial activity of the complexes 32.

TABLE 4: DIAMETER OF INHIBITION AGAINST BACTERIA IN MILLIMETER (mm) OF THE LIGAND AND THE METAL COMPLEXES

Absorption Spectral Studies: The binding ability of the nickel complexes in DMF solutions (10%) with calf thymus (CT) DNA are studied by measuring their effects on the UV spectroscopy. Absorption titration experiments of MnCl2.PSTU (1), MnSO4.PSTU (2), CoCl2.PSTU (3) and Co(NO3)2.PSTU (4) complexes in buffer were performed by using  fixed  concentration of the metal complexes to which increments of the DNA stock solution were added.

To compare quantitatively the affinity of the two complexes toward DNA, the binding constants K of the complexes to CT DNA were determined by monitoring the changes of absorbance around 260 nm with increasing concentration of DNA (Fig. 2 and 3). The appreciable decrease in absorption intensity and significant red shift of the p-p* band of the complexes are similar to that observed for its interaction with CT DNA in DMF solution, suggesting that the complex binds to DNA strongly. 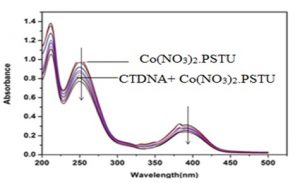 FIG. 2: ABSORPTION SPECTRA OF THE COMPLEX Co(NO3)2.PSTU IN THE ABSENCE AND PRESENCE OF INCREASING AMOUNTS OF CT-DNA (0-250µm) IN TRIS-HCl BUFFER                   These spectral characteristics obviously suggest that the complexes in this work interact with DNA most likely through a mode that involves a stacking interaction between the aromatic chromophore and the base pairs of DNA. Structurally, the ligand should provide aromatic moiety to overlap with the stacking base pairs of the DNA helix by intercalation which results in hypochromism and bathochromism. The aromatic moiety in the ligand of the complexes facilitates its potential intercalative and / or DNA major groove binding. The binding constant (Kb) values of the complexes 1-5 are given in Table 6.

TABLE 6: BINDING PARAMETERS OF THE METAL COMPLEXES OF PSTU WITH DNA 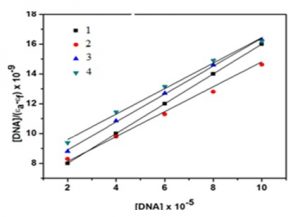 Fluorescence Spectral Studies: The fluorescence spectral method is used to study the relative binding of these complexes to CT-DNA. Ethidiumbromide (EB) emits intense fluorescence at about 600nm in the presence of DNA because of its strong interaction between the adjacent DNA base pairs. Addition of second molecule, which binds to DNA stronger than EB, would quench the EB- DNA by either replacing the EB or by accepting the excited-state electron of the EB through a photoelectron transfer mechanism. The addition of complex to EB bound CT-DNA solution caused obvious reduction in emission intensities (Fig. 4) indicating that complex competitively bound to CT-DNA with EB. It may be due to the complex interacting with DNA through intercalation binding and thus releasing free EB from the EB-DNA complex. The Stern-Volmer quenching constant Ksv value of the complexes MnCl2.PSTU (1), MnSO4.PSTU (2), CoCl2.PSTU (3) and Co(NO3)2.PSTU (4) were calculated and given in Table 6. 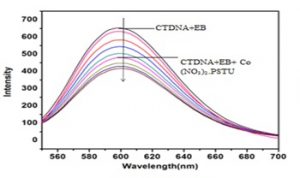 Viscosity Measurements: Viscosity measurement, which is sensitive to the changes in the length of DNA molecule, is regarded as the least ambiguous and the most critical test of evaluating the binding mode of metal complexes with DNA in solution, and provides stronger arguments for intercalative binding mode. A classical intercalation model results in lengthening the DNA helix, as base pairs are separated to accommodate the bound ligand, leading to the increase of CT-DNA viscosity. In contrast, a semi-intercalation of ligand could bend (or kink) DNA helix, reduce its effective length, and concomitantly its viscosity. To further clarify, the intercalation mode of the metal complexes 1-5 of PSTU with CT-DNA, viscosity measurements were carried out on the DNA by varying the concentration of the added the complexes.

The results of the effect of the metal complexes 1-5 on the viscosities of CT-DNA are shown in Fig. 5. As illustrated in the figure, on increasing the amount of the metal complexes, the relative viscosity of CT-DNA increased steadily, showing that these complexes bind to CT-DNA in the mode of intercalation. Thus, the results obtained from viscosity studies are consistent with our foregoing conclusions. 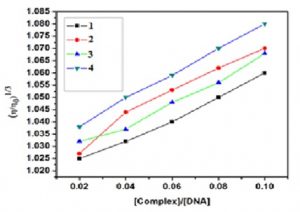 Interestingly, the DNA cleavage ability of the Mn(II) and Co(II) complexes show better cleavage activity than the other complexes. It is reasonable to suggest that the noticeable DNA cleavage activity of the complexes are due to binding mode of the ligand with the metal, which enhances the binding and cleavage ability of the molecule. The cleavage mechanism of pBR322 DNA induced by the complexes Mn(II) and Co(II) were investigated and clarified  in the presence of hydroxyl radical scavenger 0.4 M DMSO (Lanes 1-5), SOD (4 units) and EDTA as a chelating agent under aerobic conditions as shown in Fig. 6. Both DMSO and SOD and are completely ineffective, these rule out the possibility of cleavage by hydroxyl radical and superoxide.

The EDTA can efficiently inhibit the activity of the complexes. In order to understand the cleavage mechanism, the cleavage studies were carried out under anaerobic conditions as shown in Fig. 7. Under anaerobic conditions, the complex display considerable cleavage (lanes 1-5) in the presence of hydrogen peroxide. This fact implies that DNA cleavage reaction by the binuclear metal / H2O2 system should be due to hydrolytic mechanism.

CONCLUSION: In conclusion, Mannich base ligand PSTU and its Mn(II) and Co(II) complexes were synthesized and characterized on the basis of analytical, magnetic and spectral data. The Mannich base coordinates through its thiourea nitrogen and oxygen of phthalimide to the metal ion and acts as a neutral bidentate ligand. Mn(II) complexes exhibit octahedral geometry and Co(II) complexes exhibit tetrahedral geometry. The ligand and its metal complexes have shown significant antibacterial and antioxidant activity. The Co(II) metal complex showed efficient DNA binding ability and the binding constant value is consistent with other typical intercalates. The nuclease activity of the synthesized Co(II) complex was effective which could induce scission of pBr322 super coiled DNA effectively to linear form in presence of H2O2 as oxidizing agent.