ABSTRACT: This article describes the Cu(II) complexes including [Cu(phen)(L-val)TU)] 1 & [Cu(bpy)(L-val)TU)] 2 (phen = 1, 10-phenanthroline; bpy = 2,2’-bipyridyl, L-val = L-valine and TU = Thiourea). The complexes were synthesized by ligand substitution method and characterized by various physicochemical techniques. The intense UV band around 270 nm was due to n-π* transition. The binding behaviors of these complexes to cal thymus DNA (CT-DNA) were explored by spectroscopic titrations, emissions, viscosity measurements, and cyclic voltammetry. The binding constant value of complexes 1 and 2 was 8.42 × 105 M-1 and 7.12 × 105 M-1 respectively. Results suggest that the complex 1 can bind to CT-DNA through intercalation and complex 2 binds through partial intercalation. However, their binding ability differed, this may be attributed to the difference in ligand coordinated the metal centre, complex 1 shows higher binding affinity than complex 2, this is due to the extended π-conjugated system of phenanthroline ring. The cytotoxicity of complexes 1 and 2 evaluated by MTT assay; results indicated that complexes have significant cytotoxicity with HePG2 tumor cell line.

INTRODUCTION: Several control mechanisms in the living cell are based on the recognition and interaction between anticancer and biological activity biomacromolecules 1, 2. Recently speaking, ternary Cu(II)-amino acid complexes have considered much attention because of their occurrence and vital role in the transport of copper(II) ions in chemical biology systems 3, 4. DNA is the target of anticancer drugs due to the interaction between DNA and small molecules, which cause damage in cancer cells, prevent the division of cancer cells and resulting in cell death offer new anticancer drugs.

This is due to their application as new chemotherapy agents and their photophysical properties that make them potential probes of DNA conformational structure 5, 6, 7. DNA is an important cellular receptor, some of the chemicals bring to bear their anticancer effects by binding the molecules to DNA and by this means changes the replication of DNA and inhibits the growth of the cancer cells, which leads designing new and more efficient antitumor drugs.

Moreover, their drug efficiency depends on the mode and affinity of their binding ability to the DNA strands 8. Some transition metal complexes, as agent for mediation of strand scission of duplex DNA and as an anticancer drug, have been used as probes of DNA structure in solution 9, 10. The ligands, 1, 10-phenanthroline and 2, 2’-bipyridyl are strong field bidentate ligands that form more stable chelates with many transition metals.

MATERIALS AND METHODS: All the chemicals and reagents were obtained from Sigma Aldrich and used without further purification. Calf thymus DNA (CT-DNA) and ethidium bromide (EB) also were obtained from Sigma Aldrich. UV-visible (UV-vis) spectrometer was employed to check the solution of CT-DNA purity (A260: A280 > 1.80) and the concentration (ε = 6600 M-1 cm-1 at 260 nm) in the buffer. The elemental analyses were performed in the Euro-E 3000. The UV-Vis absorption spectra were recorded using a Shimadzu UV-2450 and fluorescence emission spectra were recorded using a Jobvin yvon flurolog-3-11 spectrofluorimeter.

The infrared spectra (KBr pellet) were recorded using a Perkin Elmer system one FT-IR spectrometer in the range of 4000-450 cm-1. The EPR spectrum was recorded on the JEOL Model JES FA 200 spectrometer. Viscosity experiments were carried on an Ubbelodhe viscometer, immersed in a thermostated water-bath maintained at 28.0 ± 0.5 ºC. Cyclic voltammetry experiments were recorded on CHI 602D (CH Instruments Co., USA) electrochemical analyzer under oxygen-free conditions using a three-electrode cell in water solution with KCl (0.1 M) as the supporting electrolyte. Computational study details were given in literature 18, 19.

The detailed experimental setup of DNA binding, MTT assay and antimicrobial activity described in the literature 21.

General Aspects: The ternary L-valine copper(II) complexes containing heterocyclic bases and thiourea are prepared in high yield from a general reaction in which a copper(II) salt is reacted with N,N-donor heterocyclic base, viz phen and bpy, L-valine and thiourea (Scheme 1). The complexes formulated as [Cu(L-val)(HB)(U)]NO3 where HB is the heterocyclic bases (phen and bipy). A d-d bands 602 nm (complex 1) and 545 nm (complex 2) in water due to d-d transition and bands near 272 nm and 300 nm are assignable due to intraligand transitions. 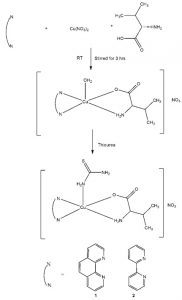 Electronic Spectral Studies: The binding copper(II) complexes (1 & 2) to calf thymus (CT) DNA have been studied by electronic spectral techniques. The absorption spectral traces of complexes (1 and 2) with increasing concentration of CT DNA are shown in Fig. 1. We have observed a minor hypsochromic shift of 2 nm along with significant hyperchromicity for complexes.

However, the intrinsic DNA binding constants (Kb) of the complexes to CT DNA are obtained by monitoring the change of the absorption intensity of the spectral bands with increasing concentration of CT DNA, keeping the complex concentration constant. The bpy complex shows weak binding to the DNA due to less extended planarity compared to phen, which is consistent with the observed trend in hypochromism 22. The intrinsic binding constant (Kb), was determined from the following equation:

The extinction coefficient (εa) was obtained by calculating Aobsd/[Cu]. The terms εf and εb correspond to the extinction coefficients of free (unbound) and fully bound complexes respectively. A plot of [DNA]/(εa-εf) versus [DNA] will give a slope 1/(εa-εf) and an intercept 1/Kb (εa-εf). Kb is the ratio of the slope and the intercept (Eqn 1).  The Kb values for complexes 1 and 2 are 8.42 × 105 M-1 and 7.12 × 105 M-1 respectively. The higher binding propensity of the phen complex in comparison to their bpy could be due to the presence of extended planar aromatic rings facilitating non-covalent interactions with the DNA molecule.

Earlier studies on bis-phen copper complexes have shown that this complex binds to DNA either by partial intercalation or by binding of one phen ligand to the minor groove while the other phen making favorable contacts within the groove 23. The nature of binding of the phen complex is proposed to be similar as observed for the bis-phen species.

Fluorescent Spectral Studies: To study the interaction between the complexes and CT-DNA, the EB fluorescence displacement experiments were also carried out. The fluorescence intensity of CT-DNA is negligible; meanwhile, the EB in the buffer solution is not much intensity due to quenching by the solvent molecules. However, if the complexes can bind into DNA, the availability of binding sites of DNA with complex will decrease, and hence the intensity of EB will be quenched. Therefore, EB can be used to investigate the interaction of complexes with DNA. It should be noted that the inner-filter effect (IFE), which refers to the light absorbance at the excitation or emission wavelength by other compounds present in the solvent, can also lead to the decrease in fluorescence intensity. The decrease in the fluorescence intensity of solvent-induced by the occurrence of IFE could lead to a nonlinear relationship between the observed fluorescence intensity and the concentration of the fluorophore, as well as a result in the introduction of maximum errors in the data evaluation. Therefore, it is necessary to consider the IFE and eliminate its interference with the results (Eq. 2). In our study, IFE was corrected with the following equation:

Where Fobs and Fcorr are the measured fluorescence and the correct fluorescence intensity, respectively; dex and dem are the cuvette pathlength in the excitation and emission direction (in cm), and Aex and Aem stand for the measured change in absorbance value at the excitation and emission wavelength, respectively. After the removal of IFE, the intensities of EB bound to CT-DNA at 614 nm, as illustrated in Fig. 2 show the remarkable decreasing trend with the increasing concentration of the complexes (1 & 2), indicating that some EB molecules were released into solution after the exchange with the two complexes, resulting in the fluorescence quenching of EB. These observations may be interpreted as the intercalation of the complexes between the base pairs of CT-DNA. The quenching of EB bound to the DNA by the complexes is in agreement with the linear Stern–Volmer (Eq. 3) equation 24:

Where I0 and I represent the fluorescence intensities in the absence and presence of complex, respectively. Ksv is a linear Stern-Volmer quenching constant, Q is the concentration of complex. In the quenching plot (insets in Fig. 4) of I0/I vs. [complex], the Ksv values for complexes 1 and 2 are 9.82 and 4.35 respectively. Thus, the evidence observed in the EB fluorescence displacement experiments are in agreement with the conclusion derived from the electronic absorption spectra measurements.

FIG. 2: EMISSION SPECTRA OF EB BOUND TO DNA IN THE ABSENCE (DOTTED LINE) AND THE PRESENCE (DASHED LINE) OF COMPLEXES 1 AND 2. ARROW (↓) SHOWS THE INTENSITY CHANGES UPON INCREASING THE CONCENTRATION OF THE COMPLEX. INSET: STERN–VOLMER QUENCHING CURVES

A small to large increase in viscosity of CT-DNA is observed for almost both the complexes, the increase in viscosity of CT-DNA by 1 is more than 2 but lower than that for the potential intercalator, namely, ethidium bromide suggesting that insertion of planar phen ring into the base pairs of CT-DNA viscosity enhancement for the phen complex 1, which is higher than the bpy complex 2, is traced to the presence of the extended planar aromatic ring in the former. Thus, all these observations suggest that it is the central aromatic rings of phen, which are involved in an intercalative mode of DNA binding and by complex may interact through partial intercalation 25, 26.

Cyclic Voltammetric Studies: The cyclic voltammetric (CV) response for complexes 1 and 2 in Tris-HCl buffer (pH 7.28) in the presence and absence of CT DNA is shown in Fig. 4. In the forward scan, the cathodic peak was not observed, in the reverse scan, an anodic peak was observed hardly, which indicates that the process is irreversible. 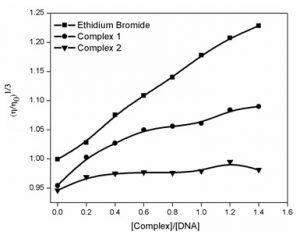 FIG. 3: VISCOSITY OF COMPLEXES 1 AND 2 WITH CT-DNA

FIG. 4: CYCLIC VOLTAMMOGRAM OF COMPLEXES (1 AND 2) IN THE ABSENCE AND PRESENCE OF CT DNA

TABLE 1: ANTIBACTERIAL AND ANTIFUNGAL ACTIVITY OF COMPLEXES 1 AND 2 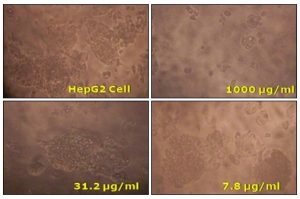 DFT Study: The two copper complexes optimized using the B3LYP/LANL2DZ basis set optimized geometry of complexes 1, and 2 were shown in Fig. 6. The intraligand angles of L-valine and phen are 79.32 and 84.82 complex 1 respectively; complex 2 angles (86.42 and 84.17) are slight deviation when compared with complex 1 Table 3. Complex 2 bond distance was shorter than complex 1.  The energy of complexes 1 and 2 were -1329.096 and 1253.226 hartee, so we can conclude that complex 1 was stable. The electrostatic potential (ESP) displayed nucleophilic region near the carboxylic group, an electrophilic region near thiourea and hydrogen of a heterocyclic base and aromatic ring center and amino acid are almost neutral Fig. 7. Phen complex has shown lower energy band gap than bipy complex Fig. 8 29, 30, 31.

TABLE 3: BOND LENGTH AND BOND ANGLE OF COMPLEXES 1 AND 2 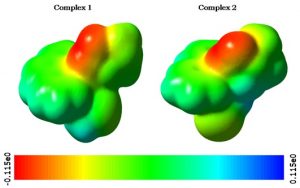 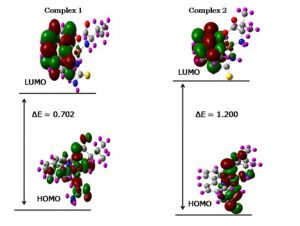 CONCLUSION: The synthesis, characterization, DNA binding and biological activities of complexes were reported. G-value suggested that copper(II) complexes are five coordination geometry. The DNA binding results revealed that the complex 1 could bind though intercalation mode and complex 2 interact through partial intercalation. As the mixed ligand complexes containing amino acid and heterocyclic bases show a unique DNA binding property, good antibacterial and antifungal agents.  Both the complexes have potential anticancer activity against HepG2 cells, IC50 value of complexes are same i.e., 31.2 μg/ml. The molecular electrostatic potential displays that electron density on the complexes, complex 1 have lower energy gap than complex 2.