Department of Chemistry 2, University of Science and Technology, Sana’a, Yemen.

ABSTRACT: A series of metal complexes, namely, Ni (II), Zn (II), Cu (II) and Pt (II), have been synthesized with newly prepared biologically active ligands. These ligands and their functional groups were carefully designed and selected to display DNA cleavage effect. Schiff base compoundof 2 - methyl - 3 - aminobenzopyrimidine - 4 - one (L1) was prepared by condensation of an equimolar mixture of 2-methyl-3-aminobenzopyrimidine-4-one (0.01 mole) and 2-hydroxybenzaldehyde (0.01 mole) in ethanol (25 ml). Schiff base (L2) compound was prepared by condensation of a mixture of Schiff base (1) (0.02 mole) and o-phenylenediamine (0.01 mole) in ethanol (25 ml) and a catalytic amount of KOH. The mixture was refluxed for 36 hrs. Ligand L2 (1 mmole) was dissolved in hot methanol. The metal chloride (1 mmole) was then added and the mixture was stirred under reflux for 24 h. The structures of ligands and their complexes have been confirmed by spectroscopic data i.e. IR, 1HNMR, MS, electronic and elemental (CHN) analysis. All Compounds were screened for DNA cleavage and showed complete cleavage of CT-DNA.

INTRODUCTION: Schiff bases play an important role in development of coordination chemistry. Many coordination compounds of biologically active ligands have been synthesized and received much attention 1-3. Chelation causes drastic change in the biological properties same applies to ligands and metal moieties 4. Azomethines exhibit a wide range of pharmacological activities like anti-microbial 5, anti-parasitic 6, anti-inflammatory 7 and anticancer 8. Pyrimidines and their derivatives possess several interesting biological activities such as anti-microbial and antitumor 9-15.

this work, Schiff base ligands were prepared by condensation of a mixture (0.02 mole) of Schiff base (1) and o-phenylenediamine (0.01 mole). The metal chloride (1 mmole) was then added and the mixture was stirred under reflux for 24 h. Characterization, electronic properties, biological activities and DNA cleavage effects were reported.

Instrumental: Melting points were measured on an electro-thermal melting point apparatus and were not corrected. FTIR spectra were recorded using the KBr disc technique on a JASCO 410 FTIR spectrophotometer. Elemental (CHN) analysis was reported using an Exeter CE-440 elemental analyzer. UV-vis absorption spectra were measured in DMF (≈10-5 mole-1) on a Pye-Unicam 8800a UV-vis automatic scanning spectrophotometer. Molar Conductivity was measured on a systronic conductivity bridge with a dip-type cell, in 1 × 10-3 M solution of complexes in DMF. 1HNMR spectra of ligands and their complexes were recorded on a Varian Gemini-200 spectrometer (200 MHZ) and (300 MHZ) in presence of DMSO-d6 as solvent and TMS as internal reference. Mass spectra were measured on a Shimadzu Qp-2010 plus mass spectrometer. Microbiological analysis was carried out at the Microanalytical Center, Faculty of Science, Sana’a University, Yemen.

Synthesis of Schiff Base of 2-Methyl-3-Amino-Benzopyrimidine-4-one (L1): The Schiff base compound was prepared by condensation of an equimolar mixture (0.01 mole) of 2-methyl-3-aminobenzopyrimidine - 4 - one and 2-hydroxybenzaldehyde (0.01 mole) in ethanol (25 ml). The mixture was refluxed for 24 h under nitrogen atmosphere. The Schiff base compound formed was filtered, washed and recrystallized from ethanol.

Synthesis of Schiff Base (L2): This Schiff base (L2) compound was prepared by condensation of a mixture (0.02 mole) of Schiff base (L1) and o-phenylendiamine (0.01 mole) in ethanol (25 ml) in presence of a catalytic amount of KOH. The mixture was refluxed for 36 hrs. The solvent was evaporated and the precipitate was filtrated, washed and purified from ethanol.

Synthesis of Schiff base (L2) Metal Complexes (M+2) (Cu, Zn, Ni) (1:1 L: M): A typical procedure was followed: the ligand L (1 mmol) was dissolved in hot methanol. The metal chloride (1 mmol) was then added and the mixture was stirred under reflux for 24 h. Complexes were filtrated, washed several times with methanol and then dried in air.

Gel Electrophoresis: DNA cleavage experiment was conducted using CT-DNA by gel electrophoresis with the ligand and metal complex in the absence and presence of H2O2 as an oxidant. The reaction mixture was incubated before electrophoresis experiment at 37 °C for 2 h as follows: CT-DNA 30 μM, 50 μM, each complex and 500 μM H2O2 in 50 mMTris-HCl buffer (7.1). The samples were electrophoresed for 2 h at 50 V on 1% agarose gel using tris-acetic acid-EDTA buffer at pH 8.3. After electrophoresis, the gel was stained using 3 μLethidium bromide (EB) and photographed under UV light using a digital camera 16.

Synthesis and Characterization: Schiff base compound L1 was prepared by condensation of an equimolar mixture (0.01 mole) of 2-methyl-3-amino benzopyrimidine-4-one (17-18) and 2-hydroxybenzaldehyde (0.01 mole) in ethanol (25 ml). The mixture was refluxed for 24 hrs under nitrogen atmosphere. Schiff base (L2) compound was prepared by condensation of a mixture (0.02 mole) of Schiff base (1) and o-phenylenediamine (0.01 mole) in ethanol (25 ml) and a small amount of KOH. The mixture was refluxed for 36 h. Ligand L2 (1 mmole) was dissolved in hot methanol. The metal chloride (1 mmole) was then added and the mixture was stirred under reflux for 24 h. These complexes were filtered, washed several times with methanol and then dried in air (Scheme 1). Table 1 summarizes the physical properties (melting point, color, percentage yield, molar conductance and elemental analysis) of Schiff bases and their complexes.

Conductance Measurements: All complexes (Ni to Pt) were electrolytes as shown by their molar conductivity (^M) measurements in DMF, 54.3 and 94.4 Scm2 mol-1, respectively. 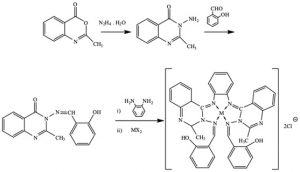 SCHEME 1: SYNTHESIS OF SCHIFF BASE PYRIMIDIN-ONE L1, L2 AND THEIR COMPLEXES

TABLE 1: PHYSICAL PROPERTIES OF SCHIFF BASES AND THEIR COMPLEXES 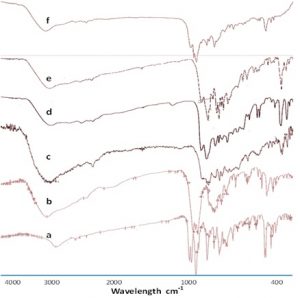 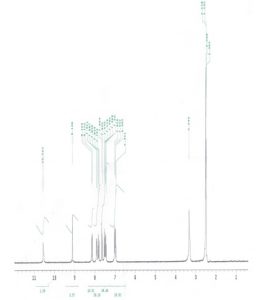 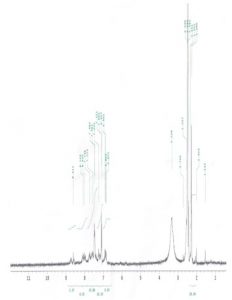 Electronic Spectra: The main electronic absorptions are summarized in Table-3 and shown in Fig. 4. UV-Vis spectra of the ligands and their complexes were measured in the range of 200-800 nm. The lower wavelength in the range 200-400 nm is specific for the electronic intra-ligand transitions. The spectra of complexes generally show the characteristic band of the free ligands with some changes both in wavelengths (λmax) and intensity together with appearances of new bands at longer wavelengths. The spectra of the ligands and their complexes exhibit bands in the regions 213-215, 268-292 and 343-414 nm, which may be due to σ-σ*, π-π*, n-π* transitions, respectively. Fig. 5 illustrates the mass spectrum of L2.

TABLE 3: MAIN ELECTRONIC ABSORPTIONS OF THE SCHIFF BASES AND THEIR COMPLEXES 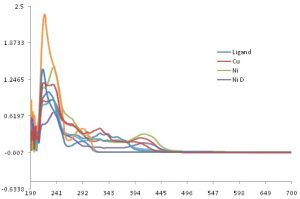 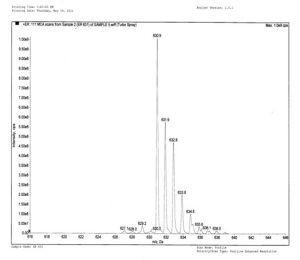 DNA Cleavage Studies: The cleavage efficiency of the complexes compared to that of control is due to their efficient DNA-binding ability. The metal complexes were able to convert supercoiled DNA into open circular DNA. The proposed general oxidative mechanisms and account of DNA cleavage by hydroxyl radicals via abstraction of a hydrogen atom from sugar units that predict the release of specific residues arising from transformed sugars, depending on the position from which the hydrogen atom is removed. Cleavage is inhibited by free radical scavengers. This implies that hydroxyl radical or peroxy derivatives mediate the cleavage reaction. The reaction is modulated by metallo complexes bound hydroxyl radical or a peroxo species generated from H2O2.

Currently, the CT-DNA gel electrophoresis experiment was conducted at 35 °C using the synthesized complexes in presence of H2O2 as an oxidant. As can be seen from the results illustrated in Fig. 6, at very low concentrations, all ligands and their complexes exhibited nuclease activity in the presence of H2O2.

CONCLUSION: This work describes the synthesis and DNA cleavage of Schiff base and their complexes.

ACKNOWLEDGEMENT: The authors would like to thank Dr. Najat Al odaini for helping to do Mass analysis.

CONFLICTS OF INTEREST: Authors have no conflict of interest regarding this article.