ABSTRACT: Quinolines bears a very good synthon so that a variety of novel heterocyclic with good pharmaceutical profile can be designed. There are various biological activities for quinolones such as antibacterial, antimalarial and various drugs possessing quinolone as nucleus are ciprofloxacin (Cipro), lomefloxacin (Maxaquin), norfloxacin (Noroxin), ofloxacin (Floxin), moxifloxacin (Avelox) and levofloxacin (Levaquin). So, in the present work 2-chloro quinoline 3-carbaldehyde containing quinolines were synthesized by using solvent conservation techniques like reflux technique. Various quinolines derivatives were synthesized by the condensation reaction between dimethylformamide, PoCl3, and different substituted aniline to give 2-chloro 3-carbaldehyde (1a). The reaction of 2-chloro 3- carbaldehyde with metformin gives quinolines Schiff bases as final compound (2a-2d). The obtained product was purified and structures were confirmed by TLC, MP & IR spectroscopy. All the compounds were screened for in-vitro anti-inflammatory activity using diclofenac sodium as standard by using protein denaturation method. Further, the selected compounds also studied for anti-inflammatory activity by in-vitro methods and anti-oxidant activity by hydrogen peroxide methods. Some of the compounds have shown significant activities compared to standard.

INTRODUCTION: Quinolines was discovered in coal tar distillate by Runge in 1832 & named Leukol. It is a heterocyclic scaffold of paramount importance to the human race. Quinoline (or) 1-azo-napthlene or benzo (b) pyridine is nitrogen-containing aromatic compound, it has molecular formula of C9H7N & its molecular weight is 129.16.

The logP value is 2.09 & has an acidic Pkb of 4.85 & basic Pka of 9.5. It is a weak tertiary base. It shows both electophilic and nucleophilic substitution reactions. It is non-toxic to humans on oral absorption and inhalation. Quinoline nucleus is occurred from several natural compounds (cinchona alkaloids) and pharmacologically active substance displaying abroad range of biological activity 1-5.

The rootstock of quinoline alkaloids is specific to the plant family Rutaceae embodying about hundred and fifty genera with sixteen species. Though alkaloids are natural products. They are also used as synthetic intermediates for the preparation of other quinoline alkaloids and polyheterocycles. Variety methods are such, as Doebner-von miller, skraup and combes. Friedlander and knorr synthesis can be used for the preparation of quinolines and their derivatives. Molecular docking is used to predict the structure of the intermolecular complex formed between two molecules 6-10. The small molecule called ligand usually interacts with protein’s binding sites. Binding sites are areas of protein known to be active in forming of compounds.

Therefore, the synthesis of quinolines derivatives attracted many researchers and various methods have been developed using a variety of catalysts and conditions. In the last few years, considerable attention has been focused on quinoline derivatives due to their interesting biological activities like anti-diabetes, anti-bacterial, anti-cancer, anti-inflammatory, anti-oxidant, etc. Quinolines also play a significant role in synthetic chemistry. So, in the present work we aimed to synthesize Schiff bases containing quinoline nucleus, characterize the derivatives using physical and spectral methods, evaluate the in-silico anti-inflammatory activity by docking studies, screen the in-vitro antioxidant activity and anti-inflammatory activities.

MATERIALS AND METHODS: All the chemicals and solvents used were of synthetic grade from finer chemicals Ltd., (Mumbai, India), E. Merck, SD Fine-Chemicals. Melting points were determined in open capillary tubes using melting point apparatus and are uncorrected. The purity of the compound was verified by a single spot in TLC using F254, 0.25 mm aluminum plates with mobile phase n-hexane and ethyl acetate (8:2, 7:3). The IR spectra were recorded on SHIMADZU FT-IR Spectrophotometer by using 1% potassium bromide discs.

Step: 1 Synthesis of Quinolines: 11-16 Take accurately weighed amount of substituted aniline (0.1 Mol) into a round-bottomed flask and add 0.1 mol of dimethylformamide (7.7 ml) and phosphorous oxytrichloride 0.01 mol (0.2 ml). Then the contents are refluxed for 4 to 5 h. After completion of reaction time, take out the RBF from the water bath. The product was poured into crushed ice and precipitate was obtained. After the formation of precipitate the product was filtered off. Finally, collect the product and then air-dried. After the formation of the dried product, it was recrystallized by using ethanol.

Step 2: Synthesis of Quinoline Contains Metformin (Grind Stone Technique): Accurately weighed equimolar concentration of metformin and first step product (substituted quinoline) were taken in a mortar and 20 ml methanol or ethanol was added. The compounds are ground for 20 min continuously in one direction. 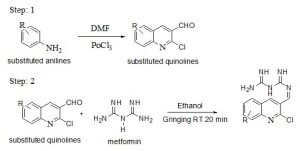 The product was added to ice. Then the product was filtered and air-dried. After the formation of dried product, it was recrystallized by using ethanol. Finally, the reaction completed is identified by monitoring melting point and TLC.

RESULTS AND DISCUSSION: Identification and characterization of the synthesized Schiff bases containing quinoline derivatives were performed by the following procedure to establish that all the derivatives had different chemical nature compared to that of the parent compounds.

Thin Layer Chromatography: In the process of identification of the formation of new compounds and determination of their purity, an important analytical technique is a chromatography. For each of the compounds, Rf value is the unique characteristic parameter. Commercial aluminum chromatographic plates were purchased from SD fine chemicals, Mumbai.

Solvent System Preparation: The solvent system is mobile phase to carry out TLC analysis was prepared by mixing n-hexane: ethyl acetate. The mobile phase is placed in the development chamber.

Application Sample: The derivatives and their compounds were dissolved in the appropriate solvent system and were spotted on the TLC plates using capillary tube on the baseline, 2 cm above from the bottom of the plates.

Then the plates were allowed to dry at room temperature and placed in the development chamber.

Chromatogram Development: Ascending technique was used for the development of chromatogram. Plates were taken out of the chamber when the solvent front hat reached 3/4th of the plate and dry at room temperature

Detection of Spots: Under UV chamber the developed TLC plates were placed and spots were observed. 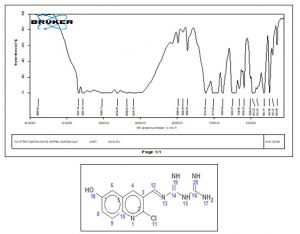 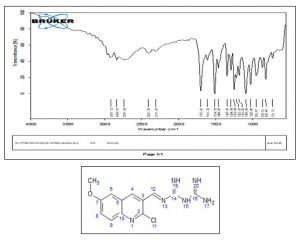 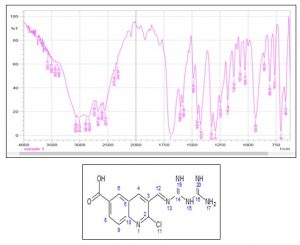 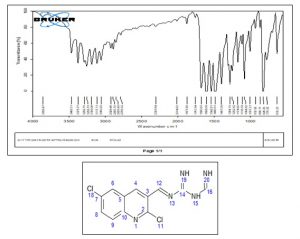 TABLE 4: SPECTRAL DATA OF THE COMPOUNDS

Albumin Denaturation Assay: The test compounds were prepared in different concentrations. From the test solution, 1 ml was taken and 1 ml of 1% aqueous solution of Egg albumin fraction was added and pH was adjusted to 6.8 by using glacial acetic acid. The sample was incubated at 72 ºC for 5 min and then cooling for 10 min. After the turbidity was obtained, the absorbance of the sample was measured spectro-photometrically at 660 nm. The experiment was performed in triplicate.

In-vitro Anti-oxidant Assay: The test sample of different concentrations were prepared by taking required amount of sample dissolved in 10 ml phosphate buffer solution. These are labeled as the standard solution. From these solutions 0.1 ml of sample was taken and 0.6 ml H2O2 was added and this is labeled as standard dilution B. From the B Standard solution different serial dilutions were carried out to obtain different concentrations i.e. 200 µg/ml, 400 µg/ml, 600 µg/ml, 800 µg/ml and 1000 µg/ml. These samples were incubated at 70 ºC for 5 min and then cooled for 10 min. The absorbance was measured   spectrophotometrically at 230 nm. The experiment was performed in triplicate.

RESULTS AND DISCUSSION: In this present research work, based on the wide literature survey, novel derivatives of quinoline Schiff bases were synthesized in two-step facile procedures and the four in number.

All the reactions were monitored by TLC and purification was done by recrystallization process. All the derivatives were characterized using special studies like FT-IR spectroscopy.

The newly synthesized compounds have been subjected to the following screening tests by appropriate standard methods.

In-vitro Antioxidant Activity: The antioxidant activity of the synthesized derivatives, II-a to II-d was carried out using Hydrogen peroxide scavenging method employing Ascorbic acid as standard at various concentrations from 200 to 1000 µg/ml. Out of all the four synthesized compounds, except III-a, remaining three derivatives have shown good to excellent activities similar minimum inhibitory concentrations compared to that of the standard ascorbic acid.

In-silico Anti-Inflammatory Activity: For all the derivatives, docking study was performed by AUTODOCK 4.2 version for theoretical prediction of anti-inflammatory activity using “Protein arginine deaminase” as the target site. Results revealed that the synthesized derivatives possess more binding affinity towards the target.Based on the results the derivates with hetero atoms like “O” and “N” in the ring or in substituted groups showed high binding affinity to the target.

QSAR Parameters: All the derivatives were subjected to QSAR study to obtain the QSAR of parameters data like molecular weight. Log P, number hydrogen bond donors, no. of hydrogen bond acceptors, no. of rotatable bonds, total polar surface area, and ADME test. Based on the results obtained, all the derivatives were found to follow Lipinski’s rule of 5 and passes ADME test.

TABLE 15: QSAR MOLECULAR DESCRIPTOR VALUES OF THE COMPOUNDS 01 TO 04 FOR ADME PREDICTIONS ACCORDING TO LIPINSKI’S RULE OF FIVE 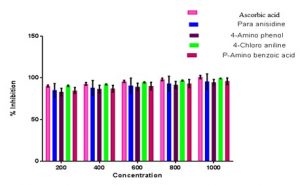 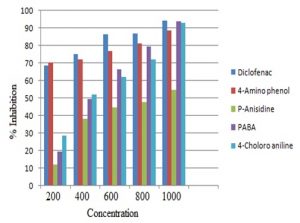 CONCLUSION: Four derivatives have been synthesized by using ecofriendly techniques like grind stone technique with the use of minimal solvent and in good yields. The chemical structures of synthesized compound were confirmed on the basis of physical and spectral data. The anti inflammatory activity of synthesized compounds were evaluated by carrying  out docking studies to understand the interactions of synthesized molecules with Protein arginine deaminase.

All the derivatives were found to follow Lipinski’s rule of 5 and pass ADME test. The antioxidant activity by H2O2 method showed few compounds have shown significant activity. Further suitable modifications of the compounds may show profound biological activities.

ACKNOWLEDGEMENT: The authors thank Annamacharya College of Pharmacy, Rajampet for providing experimental support for the work.

AUTHORS CONTRIBUTIONS: All the experimental work was carried out by the second author, whereas, the first author supervised them.

CONFLICTS OF INTEREST: Declared none