ABSTRACT: Herbal medicines are represented as the most potential field of alternative medicines all over the world for a number of diseases in which allopathic medicines have no or little solution. For this reason, a large proportion of the Indian population for their physical and psychological health depends largely on traditional system of medicines. Doxorubicin is an anticancer drug used in the treatment of cancer such as breast cancer is no longer use or high dose of doxorubicin causes cardiomyopathy which is rational side effect of this drug. Several attempts have seen made to control this problem, in which herbal medicines have shown some encouraging results and touted as an important adjuvant therapy. Through this paper the recent development of herbal solution to control doxorubicin induced cardiomyopathy is presented along with their future scope

INTRODUCTION:Cardiotoxicity is the prominent and dose limiting side effect of doxorubicin (adriamycin), an anticancer drug brought into clinical practice in 1960s.

Hence, it is very essential to study the medicinal plants in order to promote their proper use and also to determine their potential as the primary source for the preparation of new drugs. The primary health care needs majority of 80% of the world’s population which relies completely on the plants of potent medicinal as reported by world health organization.

The chemical substances that are present in the medicinal plants will be responsible for their physiological action on the human body. The chemical constitutes of the plant may be therapeutically active or in active. Indian system of medicine (Ayurveda, Unani, Siddha, Yoga and Naturopathy) is primarily based on the medicinal plants which have been developed over a long period of time 2.

Herbal medicines are getting more importance in the treatment of high blood pressure because the modern synthetic medicines have side effects. A large proportion of the Indian population for their physical and psychological health needs depend on traditional system of medicines.

Medicinal plants have become the focus of intense study in term of conservation as to whether their traditional uses are supported by actual pharmacological effects or merely based on folklore. Herbal medicines are free from side effects and less costly when compared to synthetic drugs. The present study will help the industry to produce herbal drugs with fewer side effects, which are affordable and more effective in the treatment of hypertension 3.

Doxorubicin: Doxorubicin is a secondary metabolite of Streptomyces peucetius along with daunorubicin, epirubicin, and idarubicin, and belongs to the family of anthracyclines. These are well-established and highly effective anti-neoplastic agents, used to treat several adult and pediatric cancers, such as solid tumors, leukemia, lymphomas and breast cancer 4. Apart from its high anticancer efficacy, its use in clinical chemotheraphy is limited due to its diverse toxicities, including reneal, hematological, testicular and most important cardiac toxicity that eventually ends in cardiomyopathy & heart failure. The cardiac toxic effects of DOX may occur immediately after a single dose, or repetitive dose of doxorubicin administration 5. 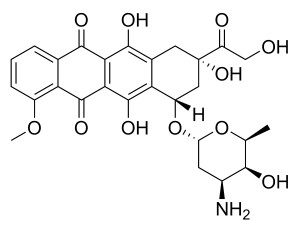 Physical properties: Doxorubicin is an odorless red crystalline solid. It is soluble in water and aqueous alcohols, fairly soluble in anhydrous methanol, and insoluble in non-polar organic solvents.It is stable at room tempera­ture in closed container under normal storage conditions.

Cardiomyopathy: Cardiomyopathy (cardio=heart + myo = muscle + pathy = disease/abnormality) is a disease of heart muscle that cannot function (contract) adequately. Cardiomyopathy results in the failure of the heart muscle to meet the needs of the body for oxygen rich blood and removal of carbon dioxide and other waste products. The official definition of cardiomyopathy of the American Heart Association in 2006 is as follows:

"Cardiomyopathy is a heterogeneous group of diseases of the myocardium associated with mechanical and/or electrical dysfunction that usually (but not invariably) exhibit inappropriate ventricular hypertrophy or dilatation and are due to a variety of causes that frequently are genetic. Cardiomyopathy either is confined to the heart or is part of generalized systemic disorders, which may lead to cardiovascular death or progressive heart failure-related disability 8.

In other way, cardiomyopathy may be defined as a group of diseases that affect heart muscles itself. It should be restricted to a condition primarily involving the myocardium9.

Classification of Cardiomyopathy: Cardio-myopathy may be divided into 2 major groups based on organ involvement. Primary cardio-myopathy (genetic, non-genetic and acquired) is mostly confined to heart muscle and is relatively few innumber. Secondary cardiomyopathy show pathological myocardial involvement as part of a large number and variety of general (multiorgan) disorders (Niemann-Pick disease). These systemic diseases associated with secondary forms of cardiomyopathy have previously been referred to as “specific cardiomyopathy” or “specific heart muscle diseases” 8, another method of categorizing cardiomyopathy are extrinsic and intrinsic (which are more commonly used when discussing the disease with patients, family, and caregivers). Extrinsic and intrinsic cardiomyopathies are given below.

II.     Hypertrophic cardiomyopathy: Hypertrophic cardiomyopathy is a primary disorder of the myocardium characterized by disproportionate thickening (hypertrophy) of the left ventricular wall with the right ventricle being only rarely affected. It is characterized by left ventricular hypertrophy which is defined as increased thickness of the ventricular wall, with a non-dilated cavity, in the absence of another cardiac or systemic disorder capable of producing the magnitude of hypertrophy present 11.

Impact on the Body:

Role of Medicinal Plants against Doxorubicin induced Cardiomyopathy: Various types of medicinal plants are used for the treatment of cardiomyopathy disease. Cardiotoxicity is an important dose-limiting factor in doxorubicin treatment of cancer patients. The selective toxicity of doxorubicin to heart cells is due to accumulation of drugwhich generates free radicals in cardiac cell.Free radical production in cardiac cells due to one-electron-reduction of doxorubicin might occur at the nuclear envelope, in Mitochondria (NADH dehydrogenase), Cytosol (xanthine oxidase) or Sarcoplasmic reticulum (NADPH cytochrome P-450 reductase).

In liver microsomes, where doxorubicin semiquinone radicals react preferentially with molecular oxygen to form relatively harmless superoxide radicals, semiquinones formed in heart mitochondria appear to react rather with hydrogen peroxide with formation of the highly reactive hydroxyl radical. Compared to liver microsomes sarcosomes from heart tissue are relatively inefficient in reducing doxorubicin to its semiquinone probably due to a relative lack of NADPH cytochrome P-450 reductase 4.The quinone ring, which is a part of the tetracycline moiety, undergoes redox cycling between quinone and semiquinone. During this process, electrons generated are captured by oxidizing agents including oxygen, which then initiates a chain reaction leading to the generation of free radical species, followed by cardiomyocyte injury and cardiomyopathy 11.

CONCLUSION: The anthracycline antibiotic DOX is one of the most effective chemotherapeutic agents against a wide variety of cancer. However, its use is seriously limited by the development of cardiotoxicity that resulted from either acute or chronic drug toxic effects. It shows cardiotoxicity effect due to the formation of free radicals in the heart tissues.

In biological systems, doxorubicin is enzymatically reduced to the doxorubicin semiquinone radical. This semiquinone radical directly transfers its electron to molecular oxygen, generating free radicals, namely, superoxide and hydrogen peroxide. This free radical generation plays an important role in the cardiotoxicity of doxorubicin. Apart from that, secondary metabolites are also responsible for cardioprotective activity at a particular dose which was evaluated using appropriate pharmacological screening approach.