ABSTRACT: Stress is one of the most significant health problem in modern society. This paves way for the researchers to focus and investigate into the biological pathways linking stress and health. Hence the goal of the present study is to discover novel drug derivatives from the active principle α asarone of the plant Acorus calamus Linn. (ACL) which was found to have antioxidant &antidepressor effect the basic physiological response to stress is through activation of Corticotrophin –releasing factor Receptor 1 (CRFR-1) which is predominantly found in pituitary gland is mainly responsible for signalling the adrenal gland receptor thereby increasing the Glucocorticoids as a response to stress. The 3D structure of CRFR 1 was derived from RCSB-PDB database and the α asarone was derive from Pubchem database. A total of 100 ligands were derived from α asarone using in silico method by ACD chemsketch software. Rapid virtual screening of these compounds were performed in the dock in tool iGEMDOCK v2.0. Based on the binding energy a total of seven ligands were further docked using Auto Dock 4.0 software. The selected seven ligands were then analysed for the drug relevant properties based on “Lipinski’s rule of five” and other drug like properties. Results of the current study showed that one of the derivatives of α asarone namely 4[(hyydroxyethynyl)amino]phenol-methane have shown excellent binding energy valves of -100.26 kcal/mol with a good drug likeliness and drug  score. Hence this compound is a excellent drug candidate in the inhibition of CRFR-1 and can be potentially used to manage the elevated levels of glucocorticoids level during stress.

INTRODUCTION: Stress is one of the most significant health problem in modern society as it is the major factor or the stimuli for the etiology of various diseases the threatens organism’s survival. Exposure to stressful condition shows its ill effect in the cellular homeostasis.

The brain has evolved adaptive mechanism for coping with stress and responds to stressor in highly stereotyped ways by producing free radicals which result in oxidative stress. Besides the locus coeruleus – noradrenalin / sympathetic nervous system 1 a major physiological response to stress is through the Hypothalamic pituitary adrenal axis. The paraventricular nucleus (PVN) of the hypothalamus synthesize and secrete corticotrophin-releasing factor (CRF), which will act on the anterior pituitary gland to produce Adernocorticotropic hormone(ACTH) which will further act on the adrenal cortex for the secretion of glucocorticoids from Zona Fasciculate 2.

The central response to stress via HPA axis is mediated through the corticotrophin – releasing factor (CRF) and its receptor CRFR -1 which is found majorly in the anterior pituitary and certain other parts of brain 3. Binding of CRF to the type 1 receptors of anterior pituitary causes activation of adenylyl cyclase in the cell membrane and increase formation of cAMP in the cell cytoplasm in turn activates the intracellular enzymes resulting in production of ACTH 4. Studies showed that CRFR-1 mutant mice produced a statistically significant reduction in anxiety level 5, 6 and it is an evident that the binding of the antistressor or antidepressor drugs with the CRFR-1 is important in the regulation of stress. Hence the study was designed to derive an inhibitors for CRFR-1.

Free radicals are the resultant of aerobic metabolism which consist of reactive oxygen species ROS and reactive nitrogen species RNS 7. Antioxidants are the only solution to decrease oxidative stress and minimize the incidence of various pathology caused by oxidants.

During stress the antioxidants level in the body normally could not neutralize the free radicals. Administration of antioxidants as drug one way to avoid the damage induced by the free radicals or another approach is to administer drugs that either boost antioxidants or reduce free radicals generation.Some native Indian plants said to have natural antioxidant properties. Acorus calamus Linn. (ACL) “sweet flag” is a well known medicinal plant. The various extract of the plant like rhizome, roots, and aromatic oils has been used for various medicinal purposes. The ACL is rich in alkaloids, phenolics and flavonoids which are found to be responsible for its beneficial biological activities 8, 9. Isomeric forms of asarone are α and β, the α asarone has been reported to be major bioactive constituent on free radicals scavengers and lipid peroxidation.

This scavenging free radical of ACL has been found to be beneficial in overcoming excess production of oxygen free radicals generated due to continous exposure of stress 10. The plant  Acorus calamus Linn.  mentioned in Indian literature; but not much scientific work to show the mechanism of action in stress relevant receptors like CRFR-1. In silico is a computerized technique which is widely used in the medical research field to discover newer drugs without using animal model. The novel drug with its affinity with the receptors, the absorption, metabolism, excreation and toxic profile can be studied by this in silico method 11.The link between computational and experimental strategies has been great values in identification and development of novel promising compounds.

Generation and Optimization of Ligand: The active compound alpha asarone which is present in Acorous calamus Linn. is selected for the present study and the SDF format of the structure was downloaded from Pub chem database (which is shown in Table 1). Further it is converted into MDL format in Open Babel software.

Using ACD Chem Sketch totally 100 ligands in 2D Format were derived with IUPAC names and the compounds were stored in MOL format. The ligands which are in MOL format was converted into PDB format for docking in Open Babel Software. ACD ChemSketch is a latest and powerful software in which we can draw desire chemical molecule, its IUPAC names and can be stored in desired formats 13. A software tool called iGEMDOCK v2.0 was used to perform rapid virtual screening of the 100 compounds 14. A population Size of 150 is set with 70 generation and one solution for quick docking. After completion of docking seven ligands were selected as they had a good binding energy. The drug relevant properties and drug likeliness of the seven ligands was analysed on “Lipinski’s rule of five” 15& OSIRIS Property Explorer. (http://www. organicchemistry.org/prog/peo/). Finally the seven new derivatives were taken for further accurate docking.

Molecular docking: The seven compounds were subjected to accurate or very slow docking by setting population size of 800 with 80 generation and 10 solutions. The post docking results of iGEMDOCK was analysed based on their electrostatic profile, hydrogen-bonding, and Van der Waals interaction.

RESULT & DISCUSSION: The corticotrophin – releasing factor receptor CRFR -1 and its 3D structure which was downloaded from RCSB-PDB is further viewed in RASMOL Structure scheme. (as shown in Fig. 1). In the Rasmol structure the alpha helices are shown in magenta, Beta sheets in yellow, turns are in paleblue colous and rest of the residues in white colour. 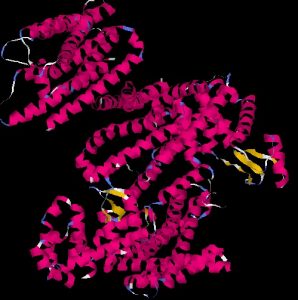 The 100 compounds were derived from the active principle α asarone using ACD Chemsketch and it was converted in to PDB format in Open Babel Software. Virtual rapis screening in iGEMDOCK software was performed for the100 compounds and finally seven best compounds were indentified on the basis of total binding energy (kcal/mol), Vanderwaals force and H bond acceptor. The results of seven best derivatives in accurate iGEMDOCK scores were displayed in Table 2. The seven selected derivatives were subjected for

Lipinski’s properties which is called as Lipinski’s Rule of five. The rule states that the compound is said to be poor in absorption or permeation if the compound has the following property: there are more than 5 H – bond donors (nHDon), more than 10 H-bond acceptors (N+O), molecular weight (MW) is over 500, Moriguchi’s log P(X LogP) is over 4.15 15, 16. The results of Lipinski’s properties were depicted in Table 3. As the final step the drug relevant properties of the seven compounds were done and the results in Table 4.

TABLE 2: THE RESULTS OF iGEMDOCK (ACCURATE) SHOWING BINDING ENERGIES OF THE SEVEN DERIVATIVES

TABLE 3: THE RESULT OF THE LIPINSKI’S PROPERTIES OF THE SELECTED SEVEN DERIVATIVES

The results of the drug relevant properties of the seven ligands shows that the seventh ligand 4[(hydroxyethynyl) amino] phenol - methane (structure shown in Fig. 2), was found to have a good drug likeness of 2.03 and drug score of 0.92. all the ligands does not possess to have mutagenic, tumorigenic, irritant profile. The docking pose of 4[(hydroxyethynyl) amino] phenol-methane with CRFR-1 is shown in Fig. 3. The seventh ligand 4[(hydroxyethynyl) amino] phenol-methane which was derived from α-asarone using ACD chemsketch is proved to fall into the Lipinsk’s rules of five and have sufficient drug likeliness and acceptable ADME properties (absorption, distribution, metabolism, excretion) and no toxicity profile so that it can be taken into consideration for further clinical trials. 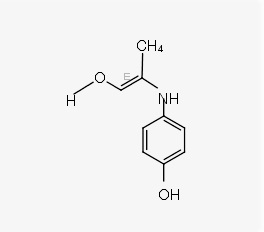 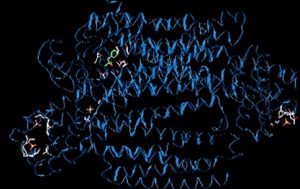 CONCLUSION: Stress involves activation of the Hypothalamic - Pituitary - Adrenal axis. This activation consists of release of the stress neuropeptide corticotropin-releasing hormone (CRH) from hypothalamicneurons and activation of CRH receptors (CRHRs) within the pituitary. The resulting release of adrenocorticotropic hormone leads to secretion of corticosteroids from the adrenal gland into the circulation. The release of glucocorticoids has its ill effects in cellular level producing alteration in cellular homeostasis like damage to mitochondria. Endoplasmic reticulum and further more. These changes in the cellular structure is basic pathogenis of various degenerative diseases. Indeed, it is know that blocking CRHR signaling will reduce stress as it will not increase ACTH secretion. Moreover, the current study shows that the derivate of α asarone of Acorous calamus has got an effective inhibitors activity on the of the CRH receptor type 1 (CRFR1) In the present study, with the help of molecular docking studies, a novel compound 4[(hyydroxyethynyl)amino] phenol-methane is found to have the ability to inhibit CRFR1  an important protein in regulating stress in turn gaining cellular homeostasis.