Ranitidine HCl has a short biological half-life of drug 2 - 3 hours, has 50 - 60% absolute bioavailability, colonic metabolism of ranitidine HCl was partly responsible for the poor bioavailability of ranitidine from the colon. The gastroretentive drug delivery system is retained in the stomach and is useful for drugs that are poorly soluble or insoluble in gastric fluids. This system helps in continuously releasing the drug before it reaches the absorption, thus ensuring optimal bioavailability.

The density of the system can be reduced by incorporating a number of low-density fillers or polymers into the system such as hydroxyl cellulose, lactates or microcrystalline cellulose. The basic idea behind the development of such a system is to maintain a constant level of drug in the blood plasma in spite of the fact that the drug does not undergo disintegration. The drug usually keeps floating in the gastric fluid and slowly dissolves at a predetermined rate to release the drug from the dosage form and maintain constant drug levels in the blood levels 1. In this study, the components will be optimized is HPMC K4M, chitosan, sodium bicarbonate with range 20 - 50 mg; 50 - 100 mg; 20 - 40 mg. the response will be used for optimization such as compressibility index, hardness, friability, floating lag time, drug release rate.

Preparation of Ranitidine HCl Gastroretentive System Floating - Mucoadhesive Tablets: Ranitidine HCl gastroretentive system floating - mucoadhesive tablets was formulated by using combination two polymers and gas generating agent. HPMC K4M, chitosan, and sodium bicarbonate were optimized by using factorial design 23 and analyzed with design expert software 7.1.5. The low and the high level of each chitosan (-50 mg, +100 mg); HPMC K4M (-20 mg, +50 mg); and sodium bicarbonate (-20 mg, +40 mg). Each formula floating tablet contains 300 mg ranitidine HCl were prepared by a conventional wet granulation method according to the formula Table 1. The ingredients were weighed and mixed thoroughly. Granulation was done with a solution of PVP K-30 in sufficient isopropyl alcohol. The granule (14 meshes) was dried in a hot air oven at 40 ± 0.5 °C. The dried granule was filtered 18 meshes and mixed with magnesium stearate as a lubricant, talc as a glidant, and citric acid as gas generating agent 2.

Weight Variation Test: Twenty tablets of the formulation were selected at random, weight, average weight, coefficient of variation, and the standard deviation was calculated.

Hardness Test: Hardness of tablet was determined using hardness tester. A good formulation should have hardness value in a range of 8 - 13 kg/cm2 4.

Friability: Friability is the measure of tablet strength and measured with Roche friability tester. Twenty tablets were weight accurately and place in the tumbling apparatus that revolved at 25 rpm for 4 minutes 5. The friability of the tablet was calculated according to the below:

RESULT AND DISCUSSIONS: Gastroretentive floating tablets of ranitidine HCl were prepared and optimized by 23 factorial design using software design expert software 7.1.5. In order to select optimum formulas and also to achieve the desired prolonged release of drug from the dosage form (by retaining drug at gastric environment). The three-factor parameters involved in the development of formulation are, the concentration of HPMC K4M polymer, chitosan polymer, and sodium bicarbonate as the independent variable (X1, X2, X3), and the response factor such as compressibility index, friability, hardness, floating lag time, in-vitro drug release. Totally eight formulation Table 1 of sustained-release tablet dosage form were prepared by wet granulation method

The prepared tablets of all the formulations were evaluated for pre-compression parameters like bulk density, tapped density and compressibility index and physical characters like tablet hardness, friability, weight variation, floating lag time, total floating time, in-vitro drug release. The main aim was to control the release of drug up to 6 h. All formulation showed good Carr’s index and Hausner ratio Table 2. Carr’s index ranged from 0.079 ± 0.041 to 0.270 ± 0.018 and the Hausner ratio ranged from 1.061 ± 0.031 to 1.283 ± 0.044. The shape of tablets of all formulations remained off white yellow, smooth, flat-faced circular with no visible cracks 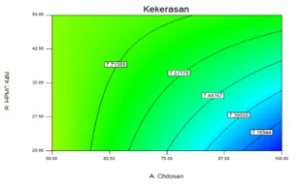 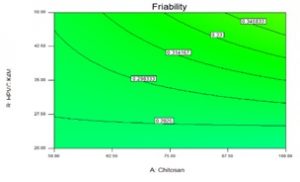 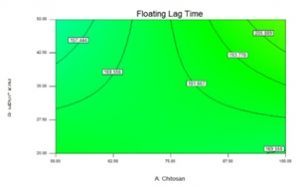 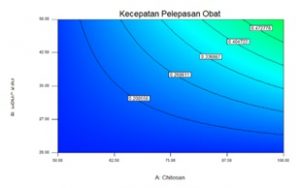 Based on the equations and contour plots Table 3, Fig. 2 friability of tablets shows all component can increase the friability of tablets, but interaction three-component can decrease friability of tablet, it shows the value of the negative’s coefficient. Floating capability or floating time is the start time of floating tablet (Floating lag time). Sodium bicarbonate and citric acid added on formulas as a gas generating agent. On contact with dissolution medium (0.1N HCl), carbon dioxide gas was generated. It was observed that the gas generated is trapped and protected within gel formed by hydration of polymer (HPMC K4M and chitosan), thus decreasing the density of the tablet below 1 and the tablet becomes buoyant. 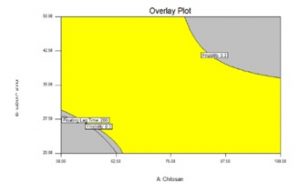 The optimum formula determined by superimposed contour plot using design expert ® program with various parameters, such as compressibility index, hardness, friability, floating lag time, drug release rate. Form the superimposed graph Fig. 5 obtained an optimum area in the comparison chitosan 100 mg, HPMC K4M 50 mg, and sodium bicarbonate 27, 10 mg. In the area when produced will give the physical properties of granules and tablets such as expected criteria corresponding to criteria/goal seat as in Table 4.

ACKNOWLEDGEMENT: The authors would like to thank the directorate of higher education of the Republic of Indonesia for the funding granted for this research through the 2016 penelitian dosen pemula scheme.