ABSTRACT: Objective: Schizophrenia is a psychiatric disorders rapidly rising in India. There are numerous classes of antipsychotic agents available. It is important to find out which are the most frequently prescribed antipsychotics in population subsets of various regions of the country. Similarly, it is also important to do apharmacoeconomic evaluation of such treatment. Thus the primary objective of the study was to observe the prescribing pattern and evaluate the average cost of antipsychotics used. Methods: The drug prescribing pattern was noted from the Psychiatry OPD of Modern Institute of Medical Science, Indore and cost analysis performed for the drugs used. The data from OPD card of patients was obtained in a structured study proforma. Results: In 6 months, 304 cases reviewed out of which 158(52%) cases were of Schizophrenia. The Female to Male ratio of patients was 1.24. The average drugs per prescription were 3.17.68% of patients were on monotherapy. Out of total antipsychotics prescribed, 35.39% were Typical and 64.61% were Atypical Antipsychotics. Most commonly prescribed antipsychotic drugs were Olanzapine (28.08%), followed by Risperidone (25.84%) and Haloperidol (23.03%), among single agent antipsychotic drugs, while Trifluoperazine-trihexyphenidyl HCl (42.85%) was the most commonly prescribed fixed-dose combination. Average cost per prescription calculated was Rs.519.30. Medication cost (calculated for 30 days) was maximum for Aripiprazole (Rs 261.96) and cheapest for Olanzapine (Rs 111.12). Conclusion: Majority of Schizophrenic patients were treated with the atypical antipsychotic Olanzapine which is also the most cost effective drug.

INTRODUCTION: The economic impact of Psychiatry illnesses is wide ranging, long lasting and huge. Schizophrenia is the commonest psychiatric illness seen among patients 1.These disorders impose economic burden on individuals, families and communities as a whole and have turned deflators pulling down the country’s GDP by at least 2-3% every year 1, 2.

Limited health care budgets and financial constraints lead to poor drug compliance and relapse which further perpetuates the economic burden 3. Hence, a new discipline of Pharmacology, “Pharmaco-economics” that makes the best use of limited resources by evaluating the clinical, economic and humanistic aspects of a pharmaceutical product has emerged 4. Pharmaco-economic evaluation provides health care decision makers, clinicians and patients with valuable information for optimal outcomes and the allocation of health care resources 5. Cost analysis study is a simple and effective partial pharmacoeconomic evaluation.

Antipsychotic medications have been available in India since a long time. Over the years the antipsychotic Pharmacopoeia has broadened and almost all the new anti-psychotics are available in India 6. However availability of new psychotropic agents and formulations with variable costs, as well as expanded indications for previously available agents, has had a profound impact on prescribing pattern in community psychiatry practice. Based on the side effect profile over the years, Atypical anti-psychotics have become the preferred choice and most of the recent guidelines also recommend the use of atypical agents as the 1st line of treatment of Schizophrenia 7. There are very few studies that have evaluated the antipsychotic prescription patterns from India. The data available has come from public sector hospitals and represents the prescription pattern specific to that center 6.

In this background the survey was undertaken to evaluate the drug prescribing pattern and cost analysis of antipsychotics at MIMS, Indore, a private medical college and hospital.

An Observational study was planned and conducted in the psychiatry department of Modern Institute of Medical Sciences, Indore. Approval from the Institutional Ethics Committee was taken for this study. In the study duration of 6 months between May to October 2015, a total of 304 patient prescriptions were included and relevant data collected. The data from the OPD card of the patients was noted on the Structured study Proforma. Cost (calculated for 30 days) of drug treatment was calculated as per the prices of drugs available in the standard commercial drug directory (CIMS – 2015 July - August issue)

The drug prescribing pattern of antipsychotics was evaluated by using the following parameters:

Cost analysis of antipsychotics was undertaken using the following indices:

The most commonly prescribed antipsychotics were Olanzapine (28.6%) followed by Risperidone (25.84%) belonging to the class of Atypical antipsychotics and Haloperidol (23.03%) belonging to the class of Typical antipsychotics (Fig.2). Among the fixed-dose combinations, the combination of Trifluoperazine and Trihexyphenidyl HCl (42.85%) was most commonly prescribed (Fig. 3). Medication cost (calculated for 30days) was maximum for Aripiprazole (Rs 261.96) and cheapest for Olanzapine (Rs 111.12) as shown intable1.

Out of 304 patients followed, 68% of the patients were on antipyschoticmonotherapy. Other classes of psychotropic drugs prescribed commonly were anti-depressants (19.48%), mood-stabilizers (16.88 %) and anti-epileptics (5.84 %). 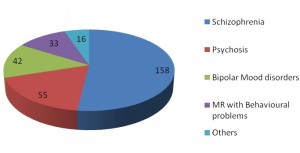 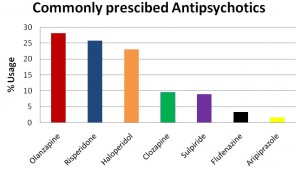 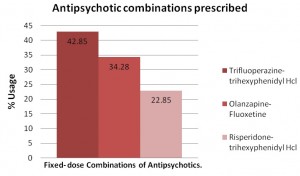 FIG.3: USAGE (%) OF ANTIPSYCHOTICS IN FIXED-DOSE COMBINATIONS WITH OTHER DRUG GROUPS

DISCUSSION: The results of this study showed that 52% cases were of Schizophrenia within age group of 15-30 years which is in line with the Schizophrenia facts and statistics by International Mental Research Organization 8. The average number of psychotropic drugs/prescription is this study was 3.17 which were similar to that reported by Mukherjee et al (3.39) 9 but was higher than that found in other studies where it ranged from 1.79 to 3 drugs per prescription 10, 11. Average number of drugs in a prescription audit is an important factor because higher number increases the risk of side effects and interactions. Average Medication cost/prescription was Rs 519.30, which includes other medicines like anticholinergics, antidepressants, mood-stabilizers or palliative medicines. The average medication was higher than the cost stipulated by P.Sharma et al as Rs 35312. Indirect costs (time loss, travel costs etc) were not taken into considerations.

Olanzapine (Rs 111.12) was found to be the cheapest and effective atypical antipsychotic which is in concurrence with a study done in New Zealand by Foster et al 16 who showed that the total direct cost were significantly lower with Olanzapine than with Haloperidol and Risperidone. 32% of the patients were prescribed more two or more than antipsychotic medications which has been defined as polypharmacy17. This figure is less than that found in the actual survey of prescriptions done in the East Asian countries with 48% of polypharmacy, out of which Japan being the highest (79%) 18. However, polypharmacy observed in our study is more than that reported by Padmini

Devi et al which reported about 9% of antipsychotic polypharmacy in the psychiatry OPD of St Johns Medical College, Bangalore, while lower than that observed by Sawhney et al (72.72%) at one end of the country (Jammu) 19. The possible explanation of high prevalence of polypharmacy in our set up may be 1) When a patient is showing inadequate response, a physician may add a medication to what is currently prescribed; when the patient shows some improvement the physician is reluctant to change this regime 19. 2) When changing medications, a physician noting an improvement while a new medication is being decreased may stop the cross-titration and continue co-prescribing both antipsychotic medications 19. 3) Pressures from hospital administrations in reducing hospital stays of Inpatients may increase pressure on polypharmacy. 4) Doctors with multiple hospital attachments may be more inclined to prescribe multiple drug prescriptions 20, 21.

CONCLUSION: Changing economic trends have meant that evaluation of treatment costs is no longer a subject of mere academic interest, even in the developing world. In this changed current scenario, there is an urgent need for more Indian studies evaluating the prescription patterns and economic burden of the commonly prescribed antipsychotics. The present study will thus provide lead for further studies in this field.