The use of bronchodilators has been increasing for the past few decades. The literatures have reported a high rate of adverse events. It has also been found out that beta-agonists are associated with an increased morbidity and mortality rate. Respiratory tolerance develops due to regular use of beta-agonists, which are widely prescribed in asthma and bronchiolitis also is of major concern.

Objective: To evaluate the rational use of bronchodilator drugs by analyzing the appropriateness of the prescription.

Study site: A 500-bedded Multispecialty Tertiary care Teaching Hospital. Result: In the study population of 133 patients male children were found to be more (58.6 %) than the female children (41.4%) Most of the bronchodilators were prescribed for infants (48.1%). Of the 133 pediatric patients, the major prescription was for SABA (99.2%). Of which the major prescription was for salbutamol (63.2%). Most of the Children with asthma were prescribed with combination therapy of salbutamol and ipratropium (81.3%). In WALRI, patients were prescribed with salbutamol (40.4%) and in acute bronchiolitis, the major prescription was found to be salbutamol and ipratropium combination (70.3%). In 52.6% of the prescriptions bronchodilator were given by nebulization and oral route. 31.6% were given by nebulization. 95.5% of patient was prescribed with antibiotics along with bronchodilators, followed by mucolytics 55.6%. Asthma action plan and patient education were not provided by healthcare providers.

INTRODUCTION: Drug use evaluation (DUE) is an ongoing, systematic process designed to maintain the appropriate and effective use of drugs. It involves a comprehensive review of patient’s prescription and medication data before, during, and after dispensing in order to assure appropriate therapeutic decision making and positive patient outcomes. Pharmacists participating in DUE programs can directly improve the quality of care for patients, individually and as populations, by preventing the use of unnecessary or inappropriate drug therapy and by preventing adverse drug reactions. Additionally, participation in DUE activities is one means by which pharmacists provide value to the health care system by exerting a positive influence on physician prescribing patterns.

DUE in Paediatrics is important since monitoring the safety of medicine use in children is of paramount importance since, during the clinical development of medicines, only limited data on this aspect are generated through clinical trials.

World Health Organization has estimated that 15 million disability-adjusted life-years are lost and 250,000 asthma deaths are reported annually worldwide. Among them 34.6% individuals were of age 18 years or younger.

Although bronchodialators have an undisputed role in the short term management of asthma,their unsupervised use presents potential  risks. Cardiac arrhythmias after Salbutamol ingestion is well documented in adults, have not been commonly described in pediatric patients.

Sudden death and atrial  arrhythmia induced during salbutamol inhalation through  a spacer, extrasystoles after nebulised salbutamol, and unifocal ventricular ectopics, and several ECG changes have been reported during salbutamol infusion in adults. In conclusion children receiving nebulised salbutamol may be at risk of developing cardiac complications, and cardiac monitoring should be considered in these cases. Respiratory tolerance develops due to regular use of beta agonists, which are widely prescribed in asthma and bronchiolitis also is of major concern.

Thus, it is essential to conduct an evaluation on the safe use of  bronchodilators.

MATERIALS AND METHODS: The protocol was accepted by Institutional Ethics Committee. It is a prospective observational study conducted at a tertiary care from May 2008 to December 2008. Patients in the pediatric ward prescribed with Bronchodilator were included in the study where as Patients who were prescribed with bronchodilators for surgical prophylaxis were excluded from the study.

Parental social history revealed that 50.4% were found to be occasional smokers.  48.9% of the parents have either high school graduate or diploma (Table 1).

The majority of the clinical conditions were in moderate state which was about 39.8%, 33.1% of cases were in  severe condition and  27.1.% were in mild  condition.

Category of  Bronchodialator Prescribed: Of the 133 pediatric patients the major prescription was for SABA(99.2%). 50.3% of the patients were prescribed with anticholinergics, methyl xanthines  were  prescribed for 7.5% patients only. 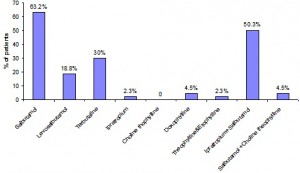 In acute bronchiolitis, the major prescription was found to be for salbutamol + ipratropium combination (70.3%) followed by 51.9% for  salbutamol. Terbutaline was  prescribed for 18.5% and only 7.4% patients  were  prescribed  with lev-osalbutamol.

Major prescriptions of bronchodilator drugs were with antibiotics 95.5% followed by mucolytics 55.6%. Other concurrent  prescriptions were  with  steroids  38.3%, expectorants 48.9%, electrolytes 54.1%, analgesics & antipyretics 18.4%, vitamins 8.3%, antivirals and anti histamines 5.3% each and anti ulcer 6.0%.

It was found that 77.4% of pediatric patients not received any oxygen supplementation. Only intravenous feeding was given to 58.6% of study population.12.8% received both IV & Oxygen and 9.7 % were given oxygen only.

Awareness of Preceptors: 75% of the care givers were found not familiar to bronchodilators  and  25% were  familiar.

DISCUSSION: There were, in total, 133 prescriptions for bronchodilator drugs recorded in pediatric ward. Major class  of  bronchodilator  prescribed was short- acting β2 agonists in 99.2% of patients followed by anticholinergics 50.3%where guidelines recommend that short- acting β2  agonists should be used in acute conditions. LABA  have no role in the management of acute asthma,so they were not prescribed.

Salbutamol (63.2%)  alone was the major  prescription for most of the patients.Studies says that children receiving nebulised salbutamol may be at risk of developing cardiac complications, and cardiac monitoring should be considered in these cases. 50.3% of the patients were prescribed with Ipratropium and salbutamol combination. This combination   were most commonly used in asthma (81.3%), WALRI(40.4%) ,and bronchiolitis (70.3%). Inhaled ipratropium may add to the bronchodilator benefits seen with inhaled short- acting β2 agonists. The addition of ipratropium bromide to beta2 agonist may be more effective than beta2 agonist alone at reducing the need for further drug treatment at 45 minutes in infants presenting to emergency departments, but not at improving "excellent" clinical response

Major prescriptions of bronchodilator drugs were with antibiotics 95.5%  followed by  mucolytics 55.6%. Other concurrent prescriptions were  with  steroids 38.3%, expectorants 48.9%, but guidelines recommended that  antibiotics are not routinely required since bacterial infections seldom trigger asthma . Consider antibiotics only in those who do not improve in response to bronchodilators, have purulent secretions or have radiological hematological evidence of infection 5.

In a review of use of Fixed Combination Preparations of Inhaled Short Acting  Beta-2 Agonists and Inhaled Corticosteroids, by Gupta  (2000) 41. Regular use of short-acting beta-2 agonists or their combinations with inhaled steroids in asthma patients becomes a matter of serious concern. Such a use could be potentially harmful to the patient as it may be associated with increased morbidity and mortality due to asthma because of poor asthma control and because of the delay in seeking medical advice during acute episodes.

It was found that bronchodilators were routinely prescribed for children  with  bronchiolitis. Salbutamol was prescribed for 51.9% and salbutamol + ipratropium combination were given to 70.9% of patients.

Similar study  conducted by Franz48(2008)  reported that no medications were used for mild  or moderate  bronchiolitis. Inhaled [beta]-agonists were used for moderate and for severe bronchiolitis and another study conducted by Karadag  2008 13 reported that Clinical scores and oxygen saturation levels improved more rapidly in the bronchodilator groups than in the placebo group up to 24 h, but these drugs did not have a sufficient effect to change the natural course of the disease.  New Bronchiolitis Guidelines 2006 American Academy of Pediatrics Subcommittee on Diagnosis and Management of Bronchiolitis recommended that Bronchodilators should not be used routinely for management. An optional trial of an - or ß-agonist should be continued only if objective evaluation indicates a clinical response. Most positive studies of bronchodilators for management of bronchiolitis show transient improvement of unclear clinical significance 49.

It was found that 77.4% of pediatric patients not received any oxygen supplementation where as guidelines recommended that oxygen must always be administered along with nebulized SA β2 agonists. Oxygen saturation must be maintained > 91%.Oxygen and intravenous feeding must  maintained.

The child may need more than maintenance fluids initially due to increased insensible losses. Fluids are also required to make secretions less viscous 50.

As the children were prescribed with very few drugs, the chances of drug interactions were rare. The major drug interaction of bronchodilators were observed with steroids.

CONCLUSION: The study found over use of antibiotics, sedatives and mucolytics and under use of steroids. Bronchodilator use was optimal but evaluation of therapy was not done commonly. Asthma therapy does not reflect guideline recommendations. Asthma action plan and patient education were not provided by healthcare providers. The study highlighted the need for a local protocol and continuing staff and parent education.