ABSTRACT: Objective: Steroids are widely prescribed and used by practitioners due to powerful anti-inflammatory and immunosuppressive actions. So, care should be exercised in the rational selection of steroids. The main aim of our study is to assess prescribing patterns, demographic and clinical variables such as drug interactions associated with corticosteroid administration and steroidal use in a tertiary care teaching hospital. Methods: This is a prospective observational study conducted for 6 months in all departments of a tertiary care hospital of various age groups in all the departments were included. The study was carried out by taking 310 participants into consideration, and their prescribing patterns were observed and analyzed. Statistical procedure of One way ANOVA was done in SPSS version 16 software. Two way ANOVA was done which showed that variability is observed in the gender groups with treatment about steroids treatment. Results: Steroids were prescribed for various age groups of patients; 84 patients are above 60 years of age. Among 310, 183 patients were male and 127 patients were female. The social history of each patient was collected and analyzed 116 patients are Smokers and 194 patients are non-smokers and 118 patients are Alcoholics and 192 patients are non-alcoholics. Budesonide was most widely used for about 39%. Systemic route (42.9%) is the most commonly used route of administration for the steroids. We found 13.5% Major interactions, 91.6% Moderate interactions, 20.3% Minor interactions. Conclusion: Our study reveals that there was a significant difference between the steroid treatments.

INTRODUCTION: There are no variations found in prescription patterns in health care professionals. though most of the drugs were prescribed rationally, clinical pharmacist involvement in patient care helps us in planning the therapy, prevention and early detection of adverse drug reactions will directly promote better patient compliance and drug safety. Most of the health care systems use drug utilization studies (DUS) as a potential tool for their evaluation.

These drug utilization studies (DUS) are otherwise called as drug utilization review (DUR) or medical utilization evaluation (MUE) are defined as an authorized, structured, ongoing review of prescribing, dispensing and use of medication.

Cross-sectional information provides a summary of drug use at a particular time 2. Corticosteroids are some of the most important anti-inflammatory and immunosuppressive agents in the pharmacological treatment of several diseases including asthma, allergic rhinitis, rheumatoid arthritis, inflammatory bowel diseases, rejection of organ transplants, and shock symptoms. The ability of corticosteroids to act on different target tissues and exert biological responses depends in most cases on the presence of the glucocorticoid receptor (GR).

Study Site: The study entitled “Drug utilization evaluation of corticosteroids uses in a tertiary care teaching hospital” was carried out in all departments of Andhra Hospital which was a tertiary care hospital in Vijayawada, Andhra Pradesh.

Study Design: This prospective, observational study was planned and done for a period of six months from September 2017 to February 2018. The study protocol was approved by the Institutional Human Ethical Committee with registered number: IHEC/SIMS/2017/001.

Inclusion Criteria: All the patients of various age groups who received any category of steroid therapy in all the departments were included. Patients of either sex taking steroids containing prescription of any disease. Patients from the inpatient department using corticosteroids. Patients with a Minimum of 2 days of hospital stay are also included.

Study Population: 5 310 subjects who are in patients for at least 2 days and who are on steroid therapy are selected for the study. Structured data collection form was prepared which includes patient demographic and medication-related information. 310 prescriptions were collected from September 2014 to February 2015. All necessary information for the study was collected from all departments, laboratory investigations, prescription and interview with patients.

Data collected was analyzed and expressed in MS-word and MS-excel 6. All patients who met the inclusion criteria were involved in the study after giving suitably informed consent (IC) before starting the study. Basic patients demographics, prescription chart, diseases prescribed with steroids, gender-wise distribution, age groups with maximum use of steroids, route of administration, type of steroid based on potency. Most widely used steroids in the department, Co-morbidities of the patient, Past medical history of the patient 7.

RESULTS AND DISCUSSION: A total of 310 patients have enrolled in the study out of which 183 patients were male, and 127 patients were female as shown in Table 1. So, we found that the majority of the males use corticosteroids with about 59% when compared to females of about 41%.

Cross Tabulation of Age vs. Gender:

In Table 4, Age group along with their use of particular steroids is differentiated.

Cross Tabulation of Age vs. Treatment:

Smoking Associated with Steroid Use: 8 Out of 310 cases, the social history of each patient was collected and analyzed. We found that 116 patients are Smokers and 194 patients are non-smokers. Differentiation of a number of smokers and nonsmokers using particular steroids was shown in Table 5. Usually, drugs have side effects if the patient is a smoker, so monitoring is required. In this study, we tried to find out the association between steroid treatment and smoking habit shown in Table 5. We have done a statistical procedure (Pearson chi-square) in SPSS version 16 software and finally got a result of significance 0.018 which states that steroid treatment is dependent on smoking habit of patients Table 6.

TABLE 5: SMOKING ASSOCIATED WITH STEROID USE

Cross Tabulation of Smoking Habit vs. Steroid Taken by Patients :

P value is less than LOS 0.05. So, the null hypothesis is rejected. This value of chi-square indicates that there is an association between the smoking and steroid treatment taken by the patient. That is steroid treatment dependent on smoking habit of patients 9.

Alcohol Associated with Steroid Treatment: Out of 310 cases, the social history of each patient was collected and analyzed. We found that 118 patients are alcoholics and 192 patients are non-alcoholics. Differentiation of a number of alcoholics and nonalcoholics using particular steroids was shown in Table 7. Usually, many drugs have interactions with alcohol, so monitoring of drug levels should be done if required. In this study, we tried to find out the association between steroid treatment and Alcohol habit shown in Table 7. We have done a statistical procedure (Pearson chi-square) in SPSS version 16 software and finally got a result of significance 0.092 which states that steroid treatment is independent on alcohol consumption of the patients Table 8.

Cross Tabulation of Alcohol vs. Steroid Taken by Patient:

TABLE 9: SYSTEM ASSOCIATED WITH STEROID USE

P-value is less than 0.05. So, Null hypothesis is rejected. The chi-square value indicates that steroid treatment is dependent on the department of its use.

Co-Morbidities of Patients Under Steroid Treatment: A total of 310 prescriptions were analyzed during the study period, and details of comorbidities of each case were also noted, and the results showed that out of 310 cases using steroids 124 have Hypertension, 114 cases have Diabetes, 46 have COPD, 35 have heart diseases, 26 have kidney diseases, 17 have CVD, 12 cases have liver disease, and 9 have arthritis and 8 have thyroid disorders. We found that the major comorbidity in most of the cases as Hypertension and next major was Diabetes, as these both may lead to further complications steroids should be used carefully to prevent any side effects. The dose and use of steroids should be carefully monitored in patients with comorbidities. Differentiation of use of Steroid in different comorbidities of patients was shown in Table 12.

Steroid Drug Interaction Based on Severity:

TABLE 14: STEROID-DRUG INTERACTIONS BASED ON SEVERITY

One way ANOVA for Treatments: In this study, the statistical procedure of One way ANOVA was done in SPSS version 16 software, to find out whether there is any difference between the Treatments. We got a result of significance 0.00 which was less than our Level of Significance (LOS) 0.05, indicating that there was a significant difference between the steroid treatments. The results of the test were shown in Table 15.

TABLE 15: ONE WAY ANOVA FOR TREATMENTS

Sig 0.00< LOS 0.05 which indicates that there is a significant difference between treatments.

Steroid Treatment: Table 17 shows the means and standard error of Steroid treatment at the level of 95% confidence interval. 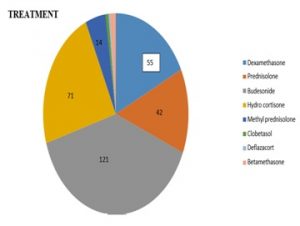 FIG. 3: THE PIE CHART OF STEROIDSUSED FOR TREATMENT IN THE 310 CASES OF THIS STUDY. MAJOR PART OF THE PIE GRAPH WASCOVERED BY BUDESONIDE (121), FOLLOWED BY HYDROCORTISONE (71), DEXAMETHASONE (55), PREDNISOLONE (42), METHYLPREDNISOLONE (14), BETAMETHASONE (4), CLOBETASOL (2), DEFLAZACORT (1) 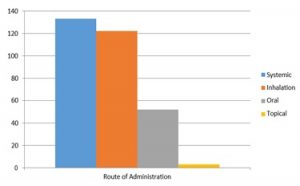 FIG. 4: SHOWS THE BAR GRAPH OF ROUTE OF ADMINISTRATION OF STEROIDS. MAJORITY OF STEROIDS WERE GIVEN THROUGH SYSTEMIC ROUTE (133) FOLLOWED BY INHALATION (122), ORAL (52), TOPICAL (3)

CONCLUSION: The irrational use of drugs (e.g., inadequate dose or polypharmacy) may lead to failure of therapy or drug interactions/adverse reactions and increase the cost of therapy /mortality. This will increase the adverse effects and can lead to dependence on these medications. So, urgent steps are required to eliminate the root of this problem at the earliest. Periodic monitoring of the drug utilization pattern is one of the methods to analyze the rationality of the drug and has been an effective tool to constitute guidelines for improving the utilization pattern. This will not only constitute a rational therapy but also lead to economic benefit and easy identification of the problem related to drug use like Polypharmacy, drug interactions, and adverse reactions.

One of the reason for the major causes of irrationality, in an Indian hospital is lack of clinical pharmacist involvement & encourage, in the clinical practice prescription monitoring. Clinical pharmacists interact directly with patients in several different ways. They use their knowledge of medication (including dosage, drug interactions, side effects, expense, effectiveness, etc.) to determine if a medication plan is appropriate for their patient. If it is not, the pharmacist will consult the primary physician to ensure that the patient is on the proper medication plan. The clinical pharmacist has a major role in promoting the steroids utilization rationally, by educating and promoting the evidence-based practice guidelines.

ACKNOWLEDGEMENT: The authors wish to acknowledge their sincere thanks to the management of SIMS college of pharmacy, Guntur and Andhra Hospitals, Vijayawada for giving their immense support to carry out this work.