ABSTRACT: Diabetes is a group of metabolic diseases and emerged as a major healthcare problem. According to the International Diabetes Federation (IDF), India has a large number of people suffering from diabetes, which will increase to almost 101 million by the year 2030. The pharmacotherapies of diabetes mellitus are diversified in their mechanism of action, safety profiles and tolerability. Drug utilization studies are important for the optimization of drug therapy. The present study aimed to evaluate the drug utilization pattern of anti-diabetic drugs in a tertiary care teaching hospital. It was a cross-sectional study, enrolled 255 patient’s prescriptions. Information was noted from prescriptions prescribed to the patients by a Doctor in prepared pro forma. It was found that combination therapy is predominant over monotherapy. The study has indicated metformin as the predominantly recommended oral anti-diabetic drug both as monotherapy and combination therapy. Metformin + glimepiride was the most commonly prescribed in combination therapy. The highest adverse drug reactions reported in our study are metformin + glimepiride which is different from other studies.

INTRODUCTION: Diabetes mellitus (DM) is a common metabolic disorder arising from a variety of pathogenic mechanisms, all resulting in elevated levels of blood glucose. It is a serious public health problem because of its complications 1. According to International Diabetes Federation (IDF), India has a large number of people suffering from diabetes; 77 million adults in India suffered from diabetes in the year 2019 which is going to increase to almost 101 million by the year 2030 2. The oral hypoglycemic agents used in the pharmacotherapy of diabetes mellitus are diversified in their mechanism of action, safety profiles and tolerability 3. Selecting a suitable regimen rationally from groups of anti-diabetic agents is an important task for doctors 4.

Drug utilization studies are useful to know the current prescribing practices and also help to identify irrational prescribing. It is important to realize that the consequences of irrational prescribing can result in complications and also lowers cost-effectiveness. The present study was designed to evaluate the choice of drugs in type 2 diabetes patients in a tertiary care teaching hospital.

MATERIALS AND METHODS: It was a cross-sectional study conducted at AIIMS Bhopal. The Institutional Human Ethics Committee approved this study of AIIMS Bhopal with the reference number IHEC-LOP/2016/IM0085. The present study involved patients who were 18 years and above age with a diagnosis of diabetes type 2. The patients selected was interviewed, and the objectives of the study were discussed with them. Information was noted from prescriptions that had been prescribed to the patients by a Doctor in prepared pro forma. This pro forma included patient detail, anti-diabetic prescribed with its dose, frequency, duration and adverse drug reaction.

The data was recorded medication status of all patients was reviewed, organized and expressed as the counts and percentages. 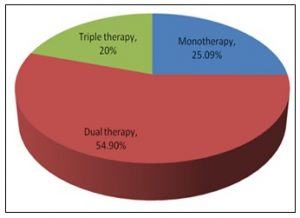 Mono Therapy: Out of 64 patients on monotherapy, the most commonly prescribed oral hypoglycemic agent was biguanides (metformin) 60 (23.52 %) followed by sulfonylureas (glimepiride) 4 (1.5 %) (Table 2). 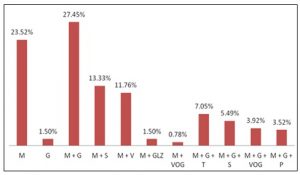 A total of 32 adverse drug reactions were identified in 32 (12.54 %) patients among 255 patients details were given in Table 3: neuropathic pain was the most common ADR observed in thirteen patients.

DISCUSSION: Diabetes mellitus are a major non-communicable disease that is growing very fast. India has a huge population of type 2 diabetes mellitus patients requiring lifelong treatment. The principle aim of a drug utilization study is to assess and evaluate the prescribing attitude of a physician and helps to promote the rational use of drugs. Out of 255 subjects 57.64 % (n = 147) were male, 42.35% (n = 108) were female and mean age of the sample was 53.9 (± 11.3) years. The Study was found a higher incidence of diabetes among the middle age group of 41-60 years (53.33%) Table 1. Different results were obtained in a study conducted at Chennai, in which out of 354 patients, 180 (51%) were male and 174 (49%) were female and the most commonly affected age group was over the age of 60 were affected 137 (39%) of patients 5.

It was found that 25.09 % of patients were on monotherapy with oral hypoglycemic agents compared to 74.9 % on combination therapy Fig. 1. But a study done at Navi Mumbai on 220 diabetes patients reported 30 % of patients on monotherapy and 70 % on combination therapy 6. The most commonly prescribed anti-diabetic drug was metformin Table 2; a similar result has been documented in studies conducted by Alex et al., Dhar et al., and Singla et al. 7, 8, 9.

Metformin belongs to the biguanides class of oral anti-diabetic drugs is an attractive choice for overweight sufferers because of its weight-neutral quality. Additionally, when used as monotherapy, it hardly ever ends with significant hypoglycemia by lowering extrahepatic gluconeogenesis without elevating insulin levels. As a result, metformin is extensively taken into consideration as a perfect first-line agent for the remedy of type 2 diabetes; moreover, the low cost of metformin making it accessible for the patients. Our study also supported the same conclusion 7. According to the International Diabetes Federation, metformin allows the body to use its insulin more effectively. The present study also complies that most of the guidelines around the world recognize metformin as first-line therapy 2.

However, the most prescribed three-drug combination was metformin + glimepiride + teneligliptin (7.05 %) (Table 2), which is the contrast with the study done by different Sharma et al. Gliptins are selectively inhibits the dipeptidyl peptidase - 4 (DPP- 4) enzyme, which enhances the action of glucagon-like peptide - 1 (GLP-1) and glucose-dependent insulin tropic (GIP) 13. DPP- 4 inhibitors work on incretin hormones that are emitted in reaction to meal intake. GLP- 1 and GIP are the two well-marked incretin hormones 4. Due to their superior efficacy, weight - neutrality, low risk of hypoglycemia and excellent tolerability, the DPP - 4 inhibitors have been recommended as a first-line or add-on therapy 14.

DPP - 4 inhibitors like sitagliptin, vildagliptin, and teneligliptin were prescribed in this study. Sitagliptin has minimal hypoglycemic events and reduced weight gain when compared to sulfonylurea as some studies have shown that sitagliptin is not associated with an increased risk of adverse cardiovascular outcomes 15. In this study, voglibose was the third most commonly prescribed anti-diabetic as a triple-drug regimen with metformin and glimepiride. Voglibose inhibits the alfa glucosidase enzyme and helps in the digestion of complex carbohydrates 4.

The present study reported that pioglitazone with metformin and glimepiride was prescribed in 3.52 % of patients. Table 2,  results did not concur with the study done by Venkateswaramurthy et al. Pioglitazone comes under thiazolidinediones that help in insulin sensitivity 10. The addition of thiazolidinediones to metformin in a 24 week randomized, double-blind and parallel-group study reported significantly improved glycemic control 16. But according to a meta-analysis, patients on pioglitazone have an increased risk of bladder cancer 17. Moreover, due to safety and tolerability, particularly weight gain and vascular complications frequently limit the application of thiazolidinediones. Because of this, pioglitazone was prescribed to very few patients. Several new drugs are available, like Glucagone peptides agonists and DPP-4 inhibitors, with positive benefits. Oral drug therapy will attain great control of glycemic targets within a short period when used accordingly 10. Adverse drug reactions reported in our study population are hypoglycemia, diarrhea, abdominal pain, dizziness, dyspepsia, nausea, and vomiting Table 3. The highest adverse drug reactions reported in our study with the metformin + glimepiride group are different from other studies 18.

ACKNOWLEDGEMENT: The authors are thankful to the Department of Medicine of AIIMS Bhopal for providing all the facilities necessary to carry out this work.