DYSLIPIDEMIC AND PROTECTIVE EFFECTS OF ASPIRIN AND CLOPIDOGREL IN OBESE RATS

DYSLIPIDEMIC AND PROTECTIVE EFFECTS OF ASPIRIN AND CLOPIDOGREL IN OBESE RATS

ABSTRACT: Introduction: Antiplatelets play a crucial role in improving many metabolic disorders and complications, including dyslipidemia, atherosclerosis, diabetes mellitus and cardiovascular diseases. The most common and effective antiplatelets used widely are aspirin and clopidogrel. The aim of this study is to evaluate the dyslipidemic and protective effects of aspirin and clopidogrel in obese rats. Materials and methods: 24 rats were divided into two groups, control (n = 6) (was taken normal chow) and the other group (n = 18) were allowed to eat beef tallow (90 g) and saturated fat (10 g) for 6 weeks to induce obesity. The second group was further classified to three subgroups, subgroup I (n = 6) was kept as obese group (n = 6) (positive control), subgroup II (n = 6) obese rats were treated with aspirin and subgroup III (n = 6) obese rats were treated with clopidogrel for 7 days. At the end of experiment blood samples were taken and lipid profile, FBS measured as well as body weight and the relative weights of liver were calculated. Histopathological samples were taken from different organs including liver, kidneys and heart. Results: Outcomes of this study showed that both tested drugs had dyslipidemic and protective effects as they significantly reduced cholesterol, TG, FBS as well as body and liver weight. They also ameliorated obesity-induced abnormalities in histopathological tissues with slight differences between the tested groups. Conclusion: It suggested from the findings of this study that both aspirin and clopidogrel might have dyslipidemic and protective effects in obese rats supported by histopathological findings.

The beginning process is started when the lipoprotein migrated from the endothelial cells to the arterial wall, where they are modified by oxidation 3. However, the endothelial cell layer has anticoagulant phenotype and the blood cells, platelets and clotting factors that are travelling there without adhesion. When an injury or physical trauma of blood vessels is occurring hemostasis cascade is begun. Platelets are the central in normal hemostasis and thromboembolic diseases, that monitoring the integrity of endothelium 4. In addition, different substances regulate the function of platelets. These are prostacyclin, prostaglandin E2, ADP, thromboxane A2, cAMP.

Aspirin and clopidogrel are the most common antiplatelets through inhibition of some of these substances mainly thromboxane A2 and ADP. These are decrease the formation or the action of chemical signals that promote platelet aggregation 5. Aspirin inhibits the thromboxane A2 synthesis from arachidonic acid in platelets by irreversible acetylation of a serine, thus will prevent binding of arachidonic acid to the active site resulted in inhibition of COX-1. It is currently used in the prophylactic treatment of transient cerebral ischemia, to reduce the incidence of recurrent myocardial infarction, and to decrease mortality in pre- and post-myocardial infarct patients 6. Other salicylates and nonsteroidal anti-inflammatory drugs also inhibit cyclooxygenase but have a shorter duration of inhibitory action because they cannot acetylate cyclooxygenase; that is, their action is reversible 7.

On the other hand, clopidogrel reduced platelet aggregation through the inhibition ADP pathway of platelets. Unlike aspirin, clopidogrel inhibits irreversibly ADP receptors on platelets and, thereby, inhibits the activation of the GP IIb/IIIa receptors required for platelets to bind to fibrinogen and to each other 8. Clopidogrel is approved for prevention of atherosclerotic events following recent myocardial infarction, stroke, and established peripheral arterial disease. Additionally, it is also used for preventing ischemic heart disease and as prophylaxis of thrombotic events in acute coronary syndrome (unstable angina) 9.

Drugs: Aspirin and clopidogrel were purchased from Bayer and Bristol-Myers Squibb respectively. They are commonly used as effective antiplatelet agents. Each of them was dissolved in 2 ml normal saline.

Animals: Wister albino rats (Rattus norvegicus Albinus) with weight (180 ± 20 g) were brought from Biology Department- Sana'a University. They were left to acclimatize in 12 h dark/light cycle with room temperature 25 ± 2 °C for one week with free access of water and normal rats chow.

Induction of Obesity: Twenty-four male rats were divided into two groups randomly, control (n = 6) (was taken normal chow) and the other group (n = 18) were allowed to eat beef tallow (90 g) and saturated fat (10 g) that contained (wheat flour base with addition of egg yolk, dried milk, sugar, salt and palm oil) for 6 weeks to induce obesity. The average consumption of diet 100 g / rat per day.

Study Design: After 6 weeks, the second group (obese) n = 18 was classified into three subgroups. Subgroup I (n = 6) was kept as an obese group (n = 6) (positive control) taken only 2 ml of normal saline, subgroup II (n = 6) obese rats were treated with aspirin (25 mg/kg) and subgroup III (n = 6) obese rats were treated with clopidogrel (25mg/kg) for 7 days 10. All tested drugs were given through oral gavage.

The University Ethics Committee approved all the experiment's steps before commencing the experiment (MECA no. 2017/07). At the end of the experiment, blood samples were taken from retro-bulbar area to measure lipid profile (cholesterol, TG) 11, 12 and FBS 13. Body weights of control, obese and treated groups before and after treatment were taken and the relative weights of liver were calculated. Histopathological samples from different groups were taken from different organs including liver, kidneys and heart to assess the harmful effects of obesity on these important organs and to assess the beneficial and protective effects of the tested drugs.

Histopathological Study: In the last day of this study, animals were undergone with light anesthesia with halothane and sacrificed. The organs (heart, liver and kidneys) were removed and washed carefully and kept in 10% formalin fixative. Then prepared in wax blocks for cutting to thin sections by using a microtome to get 5 µ thickness of that sections. Then they stained with Eosin and haematoxylin and examined to detect any histopathological changes. The aim of this study is to evaluate the dyslipidemic and protective effects of the two effective anti-platelets agents: aspirin and clopidogrel on obese rats.

Statistical Analysis: All data were expressed as Mean ± SEM by using the Statistical Analysis (SPSS) Software Package version 21. One-way variance (ANOVA) was used and the comparison between groups done by the Tukey Post Hoc - test. The values were considered significant if P < 0.5.

RESULTS: The outcome of this study indicated that there is a significant increase in mean body weight after 6 weeks intake high fat diet in the obese group compared with the control group. Additionally, there is no significant change between treated groups either by aspirin or by clopidogrel compared with the obese group after 7 days of continuous treatment as shown in Table 1. 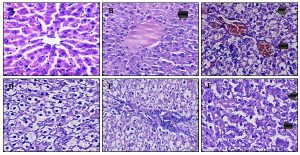 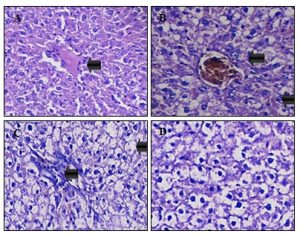 With regard to the histopathological studies of both treated groups. It was found that clopidogrel showed more beneficial effects on different body tissues that taken from rat liver, kidneys as well as heart compared with obese and aspirin treated groups as shown in Fig. 1, 2, 3, 4, 5, 6, 7, 8 and 9. 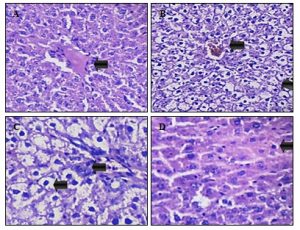 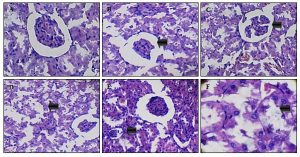 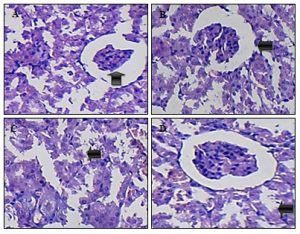 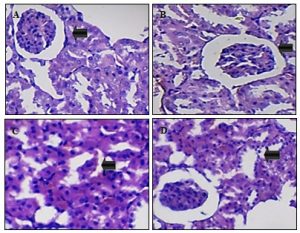 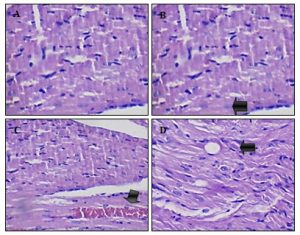 DISCUSSION: Aspirin and clopidogrel are the preferred antiplatelets in the treatment of acute coronary syndrome as they block irreversibly TXA2 and ADP (P2Y12 subtype) that reduce platelet aggregation so that reduce acute coronary events 14.  The most frequent side effects of aspirin are dyspepsia and nausea. Patients should be counselled about the risk of bleeding, especially gastrointestinal (GI) bleeding, with aspirin 15. Non-steroidal anti-inflammatory agents other than aspirin, as well as cyclooxygenase-2 (COX-2) selective anti - inflammatory agents, are contraindicated and should be discontinued at the time of ACS secondary to increased risk of death, reinfarction, HF, and myocardial rupture 16.

In the present study obesity was induced by allowing rats feed with beef tallow (90 g) and saturated fat (10 g), which contributed the majority of animal chow for 6 weeks 17. Obesity has a direct relation to many diseases, including dyslipidemia, and CVS diseases. Obesity induced changes in lipoprotein metabolism and atherognic changes. The first step is elevated triglycerides; lipolysis of TG-rich lipoproteins are impaired in obesity by reduced mRNA expression levels of LPL in adipose tissue that will cause abnormalities in other lipoprotein metabolism 18, 19. Studies using stable isotopes have shown a decreased catabolism of chylomicron remnants in obese subjects with the waist/hip ratio as the best predictor of the fractional catabolic rate 20.

However, Remnants of chylomicrons and VLDL are involved in the development of atherosclerosis 21. Several investigators have demonstrated an association between TG-rich lipoproteins and remnant cholesterol levels with the presence of coronary 22, cerebral 23, and peripheral atherosclerosis. In addition to a direct detrimental effect by chylomicron remnants on vessels 24, impaired endothelial function after an oral fat load 25. Other mechanisms of remnant-mediated atherogenesis, which may play a role in obesity, comprise the postprandial activation of leukocytes, generation of oxidative stress and production of cytokines 26. Moreover, obesity may induce hyperglycemia through insulin resistance. The altered glucose homeostasis are caused by faulty signal transduction via the insulin signaling proteins, which results in decreased glucose uptake by the muscle, altered lipogenesis, and increased glucose output by the liver. The etiology of this derangement in insulin signaling is related to a chronic inflammatory state, leading to the induction of inducible nitric oxide syntheses and release of high levels of nitric oxide and reactive nitrogen species, which together cause posttranslational modifications in the signaling proteins 27.

However, in the present study, administration of antiplatelets, aspirin and clopidogrel to obese rats for seven days produced significant reduction in lipid profile and FBS. Many studies were supported our findings, Lou et al., 2016 found that low dose of aspirin or clopidogrel had a beneficial effect in reducing serum LDL cholesterol, Lp (a) and Hs-CRP levels and improve CHD 28, 29. Platelets play a key role in atherogensis and thrombotic disorders. Platelet adhesion under conditions of high stress, as occurs in atherosclerotic arteries that have stenotic areas, is central to the development of arterial thrombosis; therefore, precise control of platelet adhesion must occur to maintain fluidity of blood and to prevent thrombotic or hemorrhagic complications 30.

The mechanisms underlying the proatherogenic function of platelets are increasingly well defined and involve specific adhesive interactions between platelets and endothelial cells at atherosclerotic-prone sites, leading to the enhanced recruitment and activation of leukocytes. Through the release of chemokines, proinflammatory molecules, and other biological response modulators, the interaction among platelets, endothelial cells, and leukocytes establishes a localized inflammatory response that accelerates atherosclerosis 31.

However, Aspirin and clopidogrel represent the cornerstone of treatment and secondary prevention of ischemic events in patients, including those with diabetes, presenting with either stable or unstable atherosclerotic cardiovascular disease 32. Many studies showed that clopidogrel has benefits over aspirin; particularly in high-risk patients 33, 34, 35, all these findings supported the outcomes of the present study.

CONCLUSION: This study suggests that anti-platelet; particularly aspirin and clopidogrel were shown protective and dyslipidemic effects as they ameliorated obesity induced harmful effects on the rat's body including biochemical parameters and tissue damage. Clopidogrel findings showed slight beneficial effect than aspirin. Further studies are suggested to overcome the limitations of this work taking in consideration the clinical trial focusing on the duration and the sample size.

ACKNOWLEDGEMENT: The author would like to thank the Faculty of Pharmacy's graduated students, Jordan Medical Labs as well as the Pathologist Dr. Al Mansori A for their support to finish this work.

CONFLICT OF INTEREST: There is no conflict of interests regarding the publication of this paper.