Oxidative stress has been implicated in the eiteology of diabetic neuropathy (DN) and anti-oxidants have shown to ameliorate this condition. Previous studies have indicated that early treatment with vitamin E acetate (VE) and methylcobalamin (MCA) attenuated surgery induced neuropathy in rats. The aim of this study was to test the effect of early co-administration of VE (50 mg/kg) and MCA (500µg/kg) (VEM) on the development of DN in laboratory rats. Male Wistar rats were divided into the three treatment groups, sham (non-diabetic, vehicle treated), diabetic rats (vehicle treated; (DU), and diabetic rats which received VEM treatment (DVEM). Diabetes was induced by single injection of alloxan monohydrate (120 mg/kg). Body weights of all subjects were noted daily and serum glucose levels (SGL) were measured at regular intervals. Behavioural assessment of thermal hyperalgesia (TH) was performed using the hot plate test and warm water tail immersion test. Finally, motor nerve conduction velocities (MNCV) were measured on day 45. Significant enhancements in SGL were noted for DU rats and this remained throughout the experimental span. A corresponding reduction in latency times for withdrawal from thermal stimuli was noted for DU treated rats which was not the case for DVEM group of animals. In addition to its effect on lowering pain thresholds, daily VEM treatments showed significant improvement in MNCV compared to DU treated animals. These results indicate an ameliorating effect of VEM treatment in diabetic rats. The underlying mechanisms by which VEM acts needs further evaluation.

INTRODUCTION: One of the major concerns with uncontrolled diabetes is the development of microvascular complications such as neuropathy, cardiovascular, nephropathy, retinopathy and erectile dysfunction1,2. Among these complications, symptoms of diabetic neuropathy have been observed to emerge at the early stages3. These symptoms include hyperalgesia (exaggerated response to non-noxious stimuli) and allodynia (low threshold pain stimuli) have commonly been reported in diabetic patients 1, 2, 3, 4.

If untreated, these symptoms could progress into diabetic foot disorders, which in worst cases can even lead to amputations 1,4.

Common treatment strategies for DN include controlling diabetes and targeting painful symptoms associated with peripheral neuropathy 3, 4. These symptoms have been managed clinically by using analgesics, tricyclic antidepressants and anti-convulsants 4.

However, this kind of management provides symptomatic relief rather than addressing the underlying pathophysiology of the DN 1. Moreover, in many cases, only anti-nociception therapeutics has not been completely effective in managing the painful symptoms 1. Therefore, there is a need to determine effective therapeutic strategies aimed at preventing microvascular complications associated with diabetes 1, 4. Such strategies should apparently be aimed at correcting the pathophysiological and biochemical alterations associated with diabetes 2, 5.

Thus, early commencement of anti-oxidant supplementation along with a powerful neuro-protective agent could effectively prolong, if not prevent the progression of DN 5. With this hypothesis, we aimed to determine the effect of early co-administration VEM on DN in laboratory rats. Previous pre-clinical studies have shown that clinical symptoms of DN such as TH and allodynia can be replicated in laboratory animals 16.

These symptoms have been measured using paradigms such as hot plate test and hot water tail immersion assays in rats and mice 17, 18. Also, measurements of the nerve conduction velocity have been applied to determine axonal degeneration and nerve re-generation in diabetic rats 19.

Animals: Adult male Wistar rats (250-300 g, National Toxicology Centre, Pune, India) were housed at the animal housing facility of Poona College of Pharmacy. The rat colony was maintained in a temperature (24±2°C) and humidity (relative humidity of 30-70%) controlled room. The lights for this room were maintained on 12:12 h cycle with lights ON from 0700 h. The rats were housed 3 per polycarbonate cage. All animals had free access to water throughout the experimental span.

All rats received standard animal pellets ad libitum, except prior to diabetes induction where all animals were fasted 48 h prior to vehicle/alloxan treatment. In order to minimize the handling stress, all rats were handled by the experimenter for 5 days prior to the commencement of experiments. Induction of diabetes, SGL estimation, behavioral testing for TH and MNCV measurements were performed between 0900 and 1700 h. The procedures used to determine pain parameters were in accordance to the guidelines mentioned by Zimmermann 20. All experimental procedures used in this study were reviewed and approved by The Institutional Animal Ethics Committee of Poona College of Pharmacy, Pune, India.

Induction of diabetes: The SGL and behavioral parameters for TH (hot tail flick assay and hot plate test) were assessed in all animals, 3 days prior to the induction of diabetes.  Diabetes was induced by methods described by Morani and Bodhankar 17, 18. On the day of alloxan treatment, animals were divided into two groups, Sham treated group, which received only vehicle (0.9% saline, SC, n=6) and the other group of rats received alloxan injection (120 mg/kg, ip, n=16). All animals were fasted for 48 h prior to vehicle/ alloxan treatment.

Hot water tail immersion assay: Methods described by Morani and Bodhankar 17, 18 were followed. This test was performed 3 days prior to alloxan treatment and 15, 45 days post alloxan treatment. Tail of rat was immersed in a warm water bath maintained at 50±0.1°C. The latency of tail flicking or withdrawal or signs of struggle were observed and were considered as end-point. To avoid tissue damage, a cut-off time of 18 sec was set for the test.

The procedure was repeated thrice at an interval of 15 min and each time was carried out by a different blinded observer. A mean of these readings was taken as final response.

Hot Plate Test: This test was performed 3 days prior to alloxan treatment and 15, 45 days post alloxan treatment. TH was assessed using Ugo Basile Hot Plate Analgesiometer (Versace, Italy). Previous methods described by Morani and Bodhankar 15 were followed. The hot plate was maintained at 55±0.1°C and the paw withdrawal latency (PWL) was measured. A cut off time of 24 s was set to avoid tissue damage. The test was repeated thrice at an interval of 15 min and each time was carried out by a different blinded observer. A mean of these readings was taken as final response.

Motor Nerve Conduction Velocity: Previous methods described by Morani et al.,15,23 were followed. This test was performed on day 45 after the assessment of TH and SGL. Rats were anesthetized using pentobarbital sodium (50 mg/kg, ip). Body temperature of the animal was maintained at 37°C under a heating lamp. The right sciatic and tibial nerves were stimulated at sciatic and tibial notch respectively by a 0.1 ms square wave pulse delivered through a pair of monopolar needle electrode (1.0-1.5 mA, 2.0 mV/D). Responses were recorded from the indigital plantar muscles using Students Biopac data acquisition system (Santa Barbara, CA, USA). MNCV was determined by measuring the distance between sciatic and tibial nerve stimulation. The data was immediately recorded and printed and all calculations were verified by a blinded investigator. 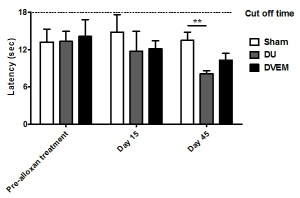 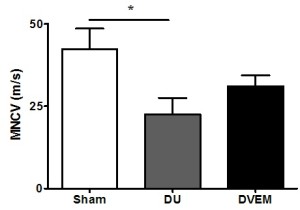 Figure 3 indicates the MNCV measurement on day 45 for experimental animals. A significant reduction in MNCV for DU group of animals was observed compared to sham treated rats [P < 0.05, F (2,18) = 3.94]. However, post hoc tests showed no significant difference in MNCV for sham and VEMtreated animals (P > 0.05).

Results from our present study demonstrates that early co-administration of VE and MCA prevents the development of neuropathic pain symptoms such as TH (Figure 1, 2) and improves MNCV (Figure 3) in alloxan induced diabetic rats. These results suggest the preventive role of VEM treatment in the development of DN symptoms. This effect might be attributed to the anti-oxidant effects of VE and the neuro-protective effects produced of MCA. As mentioned previously, enhanced levels of oxidative stress can lead to the C-fiber damage and further lead to the axonal de-generation4, 6. This had been observed symptomatically by the reduction in the latency for hot plate test and hot water tail immersion assay in diabetic rats (present study) 17, 18.

Our results from previous study showed that VEM treatment for 15 days attenuated TH and improved MNCV in surgery induced neuropathy in rats 22, 15. These results prompted us to study the effect of early co-administered VEM on the progression of neuropathic symptoms in diabetic rats.

The results from our present study confirm the ameliorative effects produced by VEM co-administration on the development of neuropathic complication in diabetic rats. The mechanism by which VME prevents neuropathic pain behavior needs further explanation. Therefore, future work in this direction is warranted.

With promising results from this present study, it would be interesting to determine the combined effect of VEM supplementation and glycemic control on progression of DN.