ABSTRACT: Prednisolone Sodium Phosphate (PSP) is a steroidal anti-inflammatory or immune suppressive agent. It is a sodium salt of the phosphoester of the glucocorticoid prednisolone. It is freely soluble in water; soluble in methanol; slightly soluble in alcohol and in chloroform; and very slightly soluble in acetone and in dioxane.A simple spectrophotometric method was developed for the determination of Prednisolone Sodium Phosphate in Pharmaceutical   tablet   dosage form. PSP exhibiting λ max at 246nm in solvent media 100% water and obeyed linearity in the concentration range of 2 to 12µg and exhibited good correlation coefficient (R2=0.999). This method was successfully applied to the determination of PSP content in four different marketed brands from local market and the results were in good agreement with the label claims. The percentage recovery was found to be 99.80±0.238. The sample solution was stable up to 10 hours.The method was validated statistically and studies for linearity, precision, repeatability, and reproducibility. Various methods for analysis of the Prednisolone Sodium Phosphate are available but are time consuming and expensive. But here developed method is new, pricise, accurate, simple, safe and stability indicating. Furthermore it was safe for operator, environmently friendly and economical in terms of cost of chemicals and waste management. Thus, this method is not only suits for routine pharmaceutical quality control analysis work, but also presents prototype for the development and utilization of greener analytical procedures in which an environmental impact is concerened. The obtained results proved the method can be employed for the routine analysis of prednisolone sodium phosphate.

It is mainly used for the treatment of a wide range of inflammatory and auto-immune disease such as asthma multiple sclerosis, rheumatoid arthritis, autoimmune hepatitis etc 2. Prednisolone is also known as ‘disease modifying anti-arthritic drugs 3 because of its anti-inflammatory action by inhibiting gene transcription for COX-2, cytokines, cell adhesion molecules, and inducible NO synthetase 4, 5. It is soluble in water; soluble in methanol; slightly soluble in alcohol and in chloroform; and very slightly soluble in acetone and in dioxane. In our Literature survey reveals that for Prednisolone HPLC 6, 7 Spectrophotometric 8-9 and solid phase extraction10 and HPTLC methods have been reported for its determination in commercial formulation. However some of these methods are costlier and time consuming. 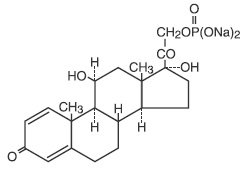 At present, acetonitrile and methanol are by far the most popular modifiers because of their favorable characteristics including excellent miscibility with water, little interference in the short wavelength region in UV detection, relatively low viscosity 11, commercial availability at high purity grade and broad compatibility with the analytes. However, these solvents also have notable disadvantages. In a case of acetonitrile which is a minor by-product in the manufacture of acrylonitrile polymers and cannot be considered as a renewable resource, a downturn in plastic production has occasionally resulted in global shortages and rising cost of this solvent 12.

Furthermore, acetonitrile is ranked by the U.S. Environmental Protection Agency (U.S. EPA) as a toxic chemical as liquid or vapor and waste has to be detoxified through special chemical treatment, leading to high to very high disposal cost 13. Later, attempts have been made to switch the media from acetonitrile/ methanol to water. However, acetonitrile/ methanol is still highly toxic to humans and causes adverse effects on aquatic life 13.

o overcome these difficulties Spectrophotometric analysis serves to be the quickest, promising and reliable method for routine analytical needs. The aim of the present study is to develop two new simple, rapid, reliable and precise UV Spectrophotometric methods for analysis of PSP from pharmaceutical formulation. To the best of our knowledge, literature search from databases has not presented the evidence of using greener and less toxic solvent for the spectroscopic analysis of Prednisolone Sodium Phosphate. Therefore, the aim of the present study was to assess the feasibility of using green solvent water as 100% solvent media for the development of an eco-friendly, operator-safe and cost-effective spectrocopic method and its validation for estimation of PSP from pharmaceutical formulation.

Materials: All chemicals and reagents were of analytical grade. Prednisolone Sodium Phosphate in the form of powder with certificate of analysis was gifted by In agio Pharmaceutical Ltd., Pune, Maharashtra, india.

10 mg of Prednisolone Sodium Phosphate accurately weighted by electronic balance and dissolved in 80ml of double distilled water in 250ml conical flask. Content of flask was kept for stirring on magnetic stirrer for 10 min and transferred in 100ml volumetric flask. Conical flask was rinsed by 20ml of double distilled water and this water was used to make up volume 100ml of volumetric flask to give conc. of 100µg/ml.

The working solution of Prednisolone sodium phosphate was prepared by further diluting the stock solution. Then pipette out 0.2ml, 0.4ml, 0.6ml, 0.8ml, 1.0ml & 1.2ml of solution and make up to 10ml leads to 2µg/ml, 4µg/ml, 6µg/ml, 8µg/ml, 10µg/ml & 12 µg/ml concentration solution. This solution was estimated by UV spectrophotometer by using H2O as blank at 246nm.

After selecting the suitable solvent, the fixing of the λmax for the proposed method is very important. This can be done by scanning the drug sample (Prednisolone Sodium Phosphate) solution in H2O in the range of 400nm-200nm and the most repeated maximum absorbance with linearity and repeatability can be fixed as λmax for the drug. And in the proposed method for Prednisolone sodium phosphate drug shows maximum 246 nm. With more linearity, repeatability (ruggedness) and the λmax was fixed as 246 nm. Shown in the (Figure 1) 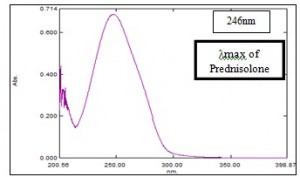 For linearity study from the working standard at different concentration 2, 4, 6, 8, 10 and 12 µg/ml of drug solution were placed in 6 different 10ml volumetric flask volume was made up to the mark with water. Absorbance was measured at 246nm and results are recorded in Table1 and Figure 2. Then obtained data were used for the linearity calibration plot.

Prepared the standard stock solution of prednisolone sodium phosphate. Prepare the three concentration of (2, 6, and 12 µg/ml), by using mobile phase water. Take λmax at the intraday and inter day. Calculate the % RSD

Samples prepared for repeatability study were preserved for 24 hour at room temperature and analyzed on the following day to test for short-term stability.

Reproducibility is assessed by mean of an inter laboratory trial. The absorbance readings were measured at 246nm at different laboratory using another spectrophotometer and the value obtained were evaluate using t-test to verify their reproducibility data for prednisolone sodium phosphate at 246nm is recorded:

Limit of detection & limit of quantitation:

The limit of detection and quantification of drug are calculated with the standard deviation and slop.

TABLE 1: LINEARITY AND RANGE FOR PREDNISOLONE AT 246NM 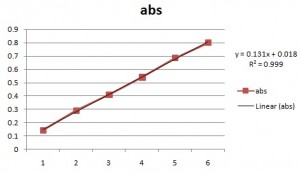 Variation of results within the day (intra day), Variation of result between days (inter day) were analyzed. Intraday precision was analyzing Prednisolone Sodium Phosphate for three times in the same day at 246nm. Inter-day precision was determined by analyzing the drug different day for three days at 246nm. Precision data for Prednisolone Sodium Phosphate at 246nm is given Table 2.

Results within the range of ensure an accurate method (Table 4) as well as indicate non-interference with the excipients of formulation.

The accuracy of the proposed methods was assessed by recovery studies at three different levels i.e. 80%, 100%, 120%. The recovery studies were carried out by adding known amount of prednisolone sodium phosphate solution of the drug to pre-analyzed tablet solutions. The resulting solutions were then reanalyzed by proposed methods; the results are reported in Table 5.

Reproducibility is assessed by mean of an inter laboratory trial. The absorbance readings were measured at 246nm at different laboratory using another spectrophotometer and the value obtained were evaluate using t-test to verify their reproducibility data for prednisolone sodium phosphate at 246nm is recorded in Table 6.

Prednisolone sodium phosphate and selective as given Table 7.

Limit of Detection & Limit of Quantitation:

The limit of detection and quantification of drug are calculated with the standard deviation and slop. Its value described in Table 8.

S= slope of the calibration curve

The proposed method was applied to analyze commercially available Prednisolone tablet. Ten tablets (5mg) were weighed and powdered. The amount of tablet powder equivalent to 50mg of was weighed accurately and transfer into the 100ml conical flask and dissolved by 40ml double distilled water. Content of flask was kept for stirring on magnetic stirrer for 10 min and transferred in 50ml volumetric flask. Conical flask was rinsed by 10ml of distilled water and this water was used to make up volume 50ml of to give conc. of 1mg/ml. Weigh accurately about 10 tablets (5mg), powder and take 50mg equivalent quantity of prednisolone and transfer into a 50ml standard flask. And dissolve the water by using magnetic staring (30min).

Then pipette out 1ml of solution and make up to 100ml leads to 10µg/ml concentration solution. This solution can be estimated in UV spectrophotometer by using water as blank at 246nm. Compare with the standard.

The sample of 4µg/ml drug solution was prepared by suitable dilution with diluents and absorbance were taken at 246nm against the blank. The stability of sample was found to be more than 10 hrs. As shown following Table 9.

CONCLUSION: The results and the statistical parameters demonstrate that the proposed UV spectrophotometric method is simple, rapid, specific, accurate and precise. The method showed acceptable linearity and accuracy. Method was safe for operator, environmentally friendly and economical in terms of cost of chemicals and waste management. Therefore, this method can be used for the determination of prednisolone sodium phosphate either in bulk or in the dosage formulations without interference with commonly used excipients and related substances by the utilization of greener analytical procedures in which an environmental impact is concerned