ABSTRACT: Urolithiasis is the most prevalent urinary tract disorder in males. Alfuzosin is a selective antagonist of post-synaptic α1a adrenoceptor, causing relaxation of smooth muscle in the bladder and prostate, which results in an improvement of urine flow and prevents ureter stones. The present study was aimed to evaluate the effectiveness of Alfuzosin on rats as a preventive and curative agent against the development of urolithiasis. Urolithiasis was induced by oral administration of 0.75% v/v ethylene glycol and 2% w/v ammonium chloride in drinking water for 15 days in rats. Ethylene glycol feeding resulted in hyperoxaluria and a significant (p<0.001) increased in urinary calcium, phosphate, and serum creatinine, uric acid levels. By oral administration of Alfuzosin at the dose of 1 mg/kg and 2 mg/kg for 15 days as a preventive regimen and from 8th day to 15th day as a curative regimen, significantly (P<0.01) reduced the calcium, phosphate, creatinine and uric acid levels in rats. The histopathological studies showed the disrupted renal parenchyma, degenerative changes in glomeruli, calcification in glomerulo tubular structures, and microcrystal deposition were observed in the section of the kidney from animals treated with ethylene glycol and ammonium chloride. This was reduced after treatment with Alfuzosin. These observations enable us to conclude that Alfuzosin as preventive and curative effects against ethylene glycol and ammonium chloride-induced urolithiasis in rats.

INTRODUCTION: Urolithiasis (from Greek ouron means urine, and lithos means stone) is the formation of calculi (stone) in the urinary system. A kidney stone is a hard crystalline mineral material that contains crystal and organic matrix components.

The symptoms are an obstruction to urine flow, renal colic; the person suffers pain radiating from the flank to the groin, inner thigh, and genitals regions, restlessness, nausea, vomiting, sweating, and hematuria. Most of the urinary calculi are calcium oxalate crystals alone or mixed with calcium, phosphate, cysteine 2. The occurrence of urolithiasis is high in recent days.

Epidemiological studies revealed that urolithiasis is to promote stone formation by suppressing osteopontin more prevalent in males, about 70-81% (testosterone appears expression in the kidneys) and in females is about 47-60% (estrogen appears to inhibit stone formation by increasing osteopontin expression in the kidneys). Osteopontin is a protein inhibitor of Calcium oxalate nucleation and growth 3.

Stone formation is a complex process involving crystalline phase (formation of a crystalline or mineral) and non-crystalline phase (kidney stone matrix). There are four main issues for crystallization: supersaturation of urine with respect to ions (such as calcium, oxalate, uric acid), crystal nucleation, crystal growth, and crystal aggregation. Supersaturation acts as a driving force for stone formation. The imbalance between inhibitors (citrate, magnesium, potassium and pyrophosphate) and promoters (calcium, oxalate, uric acid, inorganic phosphate) in the kidney forms calculi 4.

Supersaturation of urine with a substance can crystallize at acidic pH, which initiates the calculi formation. An eg. Uric acid and calcium calculus forms at acid pH when urine is supersaturated with uric acid and calcium respectively 2. Crystal nucleation involves the interaction between mineral and macromolecules in-vivo, which is a complex phenomenon influenced by physiological factors such as increases in inorganic ion concentration 5. Crystal growth and crystal aggregation is the process that involves the formation of a new and larger mass by the adhesion of existing particles. Aggregation is a quick process in which the formation of larger particles occurs within seconds, and it is considered a more critical phase than nucleation and crystal growth 2.

The main objective of this study was to evaluate the preventive and curative effects of Alfuzosin in male rats. Alfuzosin is a selective antagonist of post-synaptic α1a adrenoceptor, located in prostate, bladder, and ureter. It is used in the treatment of Benin Prostrate Hyperplasia and Hypertension 6. Blockade of these adrenoreceptors can cause relaxation of smooth muscle in the bladder, neck, and prostate, resulting in improvement of urine flow and prevents ureter or bladder stones.

This urine flow washes crystals from the system before they begin adhering to make a stone. Alfuzosin acts through double mechanisms primarily increases the rate of stone passage in the ureter, secondary action on C-fibers of the sympathetic postganglionic neuron, which blocks the transmission of pain to CNS 7.

Method: Thirty-five Wistar albino rats of males weighing between 180 to 200 g (Mahaveer Enterprises Hyd.) were selected for the anti-urolithiatic activity. The animals were acclimatized to standard laboratory conditions of temperature (22 ± 3 °C) and maintained on 12:12 h light: dark cycle provides regular rat chow and drinking water ad libitum 6. The animal care and experimental protocols were in accordance with CPCSEA / IAEC (VCP/2012/10/6/04).

Induction of Urolithiasis by using Ethylene Glycol and Ammonium Chloride in Rats: In the present study, urolithiasis was induced by oral administration of Ethylene glycol (0.75% v/v) and Ammonium chloride (2%w/v) in drinking water daily from1st day to 15 days with regular rat food 8.

In this study, ethylene glycol and ammonium chloride showed a marked elevation in urolithiatic biomarkers like calcium, oxalate, inorganic phosphate, creatinine, and uric acid levels in urine and blood. Urine volume and urine pH was estimated.

Collection of Urine and Blood Samples:  Rats were hydrated with 5 ml of distilled water orally, placed in a separate metabolic cage, and 24 h urine samples were collected from overnight fasted rats on day 15th from normal, standard, and preventive treated groups. Whereas curative treated groups, urine samples were collected on 7th day and 15th day. The samples are centrifuged at 2,500 rpm for 5 min. A drop of concentrated HCl was added to the urine before being stored at 4 °C 4. Blood samples were collected 0th day, 8th day, and 15th day from all groups of animals through retro-orbital puncture under mild anaesthetic conditions. The serum was separated by centrifugation at 5,000 rpm for 10 min. and was stored at -20 °C for further biochemical assays 4.

An overdose of ether and kidneys killed rats removed rapidly. One kidney from each group was stored in 10% formalin solution to carry histopathological examination. Remaining kidneys were used to estimate biochemical parameters. Kidneys were perfused with ice-cold saline (0.9% w/v sodium chloride). One kidney from each rat was separated and washed in ice-cold 0.15M KCl. Then the kidney was homogenized using 10% HCl, and the homogenate was centrifuged at 2,500 rpm for 3 min, and the supernatant was assayed 9.

Histopathological Examination: The abdomen was cut, opened, and removed a kidney from each animal. Isolated kidneys were cleaned off extraneous tissue and preserve in 10% formalin solution. One of the isolated kidneys was embedded in paraffin using conventional methods and cut into 5 µm thick sections and stained using hematoxylin-eosin dye, and finally mounted in diphenyl xylene. Then the sections were observed under a microscope for histopathological changes in kidney architecture, and their photomicrographs were taken 9.

Statistical Analysis: The data obtained by the various parameters are statistically evaluated by ANOVA (analysis of variance) followed by Dunnett’s Multiple Comparison Test using Graph Pad Prism Software. The mean values ± SD are calculated for each parameter. P-value less than 0.05 was considered as statistically significant 10.

Normal Control Group: The analysis of the histo-pathological examination of rat kidney treated with normal drinking water showed no lesions of pathological significance. 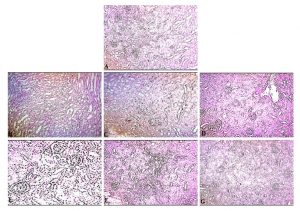 DISCUSSION: The above result indicates that ethylene glycol (0.75% v/v) and ammonium chloride (2% w/v) administration in rats forms renal calculus mainly composed of calcium oxalate and calcium phosphate. Ethylene glycol is a metabolic precursor of oxalic acid, which induces oxalate lithiasis by enzymatic oxidative conversion of glycolic acid to oxalic acid via glyoxylate. The enzymatic disturbances are the causative factors for hyperoxaluria and hypercalciuria 5 whereas administration of ammonium chloride induces urinary acidification, favours adhesion and retention of calcium oxalate and calcium phosphate crystals within the renal tubules 11. The super-saturation of urine with calcium oxalate and calcium phosphate is the most common component of kidney stones and is an important factor in crystallization 12.

After feeding with ethylene glycol causes significant elevation (p<0.001) in urine calcium, urine phosphate, serum creatinine, serum uric acid, whereas ammonium chloride feeding causes a significant reduction in urine volume and urine pH when compared with the normal control group. This confirmed the induction of urolithiasis in rats which is supported by histopathological changes observed in kidney tissue. Histopathological reports revealed that ethylene glycol and ammonium chloride will disrupted renal parenchyma, ruputre of glomeruli, deposition of microcrystals, congestion, and infiltration of mononuclear cells in and around the tubules.

In this study, treatment with Alfuzosin in rats for 15 days as a preventive regimen causes a significant (P<0.01) increased in the urine volume and urine pH when compared to urolithiatic group. By increasing the urine flow, the crystals may wash out from the urinary system. In preventive and curative low dose (1 mg/kg, p.o) and high dose (2 mg/kg, p.o) treatment groups, there was a significant (P<0.01) dose-dependent reduction was observed. It concluded that Alfuzosin can prevent and cures the urinary supersaturation of calcium oxalate and calcium phosphate crystals.

CONCLUSION: According to obtained results, the oral administration of Alfuzosin was effective for preventive and curative treatments of urinary calculi (calcium phosphate and calcium oxalate stones) in rats. Alfuzosin has anti-urolithiatic activity against Ethylene glycol and Ammonium chloride-induced urolithiasis in rats, evidenced by observing the histopathological changes. A higher dose of Alfuzosin 2 mg/kgp.o has been shown to be effective compared to a lower dose of Alfuzosin 1 mg/kgp.o in rats. Thus the present study concludes that Alfuzosin at a high dose as a preventive and curative effect.  So, Alfuzosin can be used as a drug of choice in kidney stones. For patients suffering from hypertension and kidney stones, this drug may be suggested.

ACKNOWLEDGEMENT: It is my privilege to convey my sincere regards and a deep sense of gratitude to my beloved guide Dr. A. Rama Narsimha Reddy, Principal, Vaageswari College of Pharmacy, for his keen interest in my project work, generous supervision, inspiring guidance, valuable suggestions and freehand at work made the development of this study possible.