INTRODUCTION: Salvia miltiorrhiza Bge. belonged to the dicotyledonous labiatae family, and could remove blood stasis, induce menstruation and relieve menalgia, pure heart and dispel vexed, cool and carbuncle and so on 1. As a kind of Chinese traditional medicine of removing blood stasis, the market demand of Salvia miltiorrhiza Bge was overmuch, but in recent years, Chinese herbal medicine’s long-term extensive planting resulted in its production and medicinal ingredients decreased year by year, seriously degradation of germplasm resources.

So it was important to make use of the modern biological technology to improve the growing conditions so as to improve the yield and quality of Salvia miltiorrhiza.

Arbuscular mycorrhizal (referred to as AM) fungi was a kind of beneficial microorganisms in soil, and could form a symbiotic relationship with the majority of terrestrial plants. A huge network of hyphae was formed in the surrounding of host plant root, thereby increased the root absorption of water and nutrients in soil, otherwise AM fungal hyphae would compound some substance to adjust some chemical reactions in plants through its own to promote the growth, stress resistance 2, 3 and improve the effective component of plants. He Xueli 4 researched AM fungi could promote the growth of Minqin Seriphidium, impove total N, total P, total flavonoids contents and the resistance of plants under water stress; in addition, with the pot experiments, the content of two species of medicinal components total-coumarins and imperatorin had been increased in the root of Angelica dahurica inoculated with AM fungi 5. Zhao Qinghua 6 researched the effect of AM fungi and nitrogen amount on the growth of tea, the results showed that AM fungi could improve the content of tea polyphenols, caffeine, amino acids and water extracts under the certain nitrogen level, which significantly improved the quality of tea. Liu Lili 7 confirmed that the 5 kinds of arbuscular mycorrhizal fungi had increased the selenium rich ability of Hongyang kiwifruit leaves, polysaccharide content and photosynthetic index.

Selenium was a necessary element in human and animals and suitable concentration could regulate some plants’ growth 8. Selenium deficiency easily cause antioxidant stress of human body, susceptible to diseases such as cancer 9. While the intake of selenium in the human body directly or indirectly came from plants, so plants played an important role in the selenium ecological chain. What’s more the plants could significantly enhance the resistance, improve its quality after selenium supplementation 10.

Cheng Jialing applicated with suitable concentration of Na2SeO3 on the mulberry leaves, so that the content of selenium, amino acid, soluble protein, soluble polysaccharides and flavonoids were increased, the nutrition and health value were improved. While as a kind of selenium rich plant, Salvia miltiorrhiza supplemented with exogenous selenium could not only improve the yield and content of selenium, but also the selenium compounds and medicinal components in vivo may have the synergistic effect in the treatment of many diseases 11.

Salvia miltiorrhiza seeds purchased from the Hebei Baoding Anguo medicine market in the march of 2013. Microbial inoculants obtained from rhizosphere soil containing spores and mycelium of ryegrass inoculated with AM fungi, each 10g dried soil containing 50 spores. Sodium selenite solution was sprayed on the foliar.

Culture medium was non sterilized soil. The experiment set AM fungi and content of selenium two factors, while selenium amount set 4 levels, Na2SeO3 concentrations were 0, 20, 40, 80µg·ml-1, the two treatments of AM fungi inoculation and non inoculation were set on the same selenium level, each treatment was replicated 4 times, that was total 32 basins.

Seeding on 2013-04-10, three kilogram soil for each pot, the fertilizers: 0.963g CO(NH2)2, 0.576g  KH2PO4 and 0.636g K2SO4. Each inoculation treatment add inoculants 50g, applicated for two layers, while the control sample add equal amount of sterilizing inoculants. Daily management was implemented in Hebei University glass greenhouse, made a reasonable control of moisture and temperature, made sure each pot 3 trees after emergence, regular watering Ripper, selenium was sprayed on 2013-06-20. Configuring mass concentrations were 0,  20,  40,  80µg·ml-1 Na2SeO3, a selenium treatment was conducted every 20 days, 3 times in a row, and harvested on 2013-11-10.

The effect of AM fungi and selenium content on the growth of salvia miltiorrhiza. It can be seen from Table 1, on the same selenium level, the height, root shoot ratio, and dry mass over ground and underground of plants inoculated with AM fungi were significantly increased, indicated that AM fungi could significantly increased the  growth of Salvia miltiorrhiza’s each part comparing with back plants. AM fungi and selenium concentration did not play a leading role on the growth of root, this may be the main factor of root length had no significant changes.

TABLE 1: EFFECTS OF AM FUNGI ON THE GROWTH OF SALVIA MILTIORRHIZA UNDER DIFFERENT SE LEVELS

The effect of AM fungi and selenium on the physiological indexes of salvia miltiorrhiza. It can be seen from Table 2, on the same selenium level, the content of chlorophyll and protein in the leaf of Salvia miltiorrhiza seedlings inoculated with AM fungi were significantly increased, showed that the inoculated plants grew well, and had stronger photosynthesis and higher survival ability. The mass fraction of proline and malonaldehyde were lower, illustrated that AM fungi could increase the resistance of plants. The content of soluble sugar was lower than non inoculated strains, so AM fungi could not improve the content of soluble sugar.

But the content of chlorophyll, soluble sugar and malondialdehyde in fresh leaves of salvia miltiorrhiza reduced significantly on the condition of high selenium, showed that the higher selenium affect the health of Salvia miltiorrhiza. Taken together, AM fungi and selenium played a synergistic effect on the growth and increasing resistance of plants, so the optimal cultural conditions for Salvia Miltiorrhiza was inoculated with AM fungi and sprayed selenium when the concentration was  20~40μg·ml-1.

TABLE 2: EFFECTS OF AM FUNGI ON THE PHYSIOLOGICAL INDEX OF SALVIA MILTIORRHIZA UNDER DIFFERENT SE LEVELS 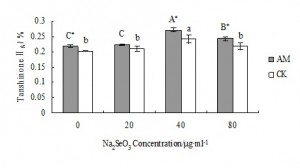 FIG.1: THE CONTENT OF SE IN SALVIA MILTIORRHIZA EACH PART WITH AM FUNGI UNDER DIFFERENT SELENIUM LEVELS 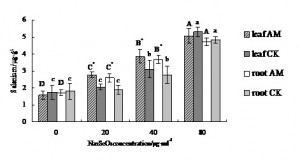 FIG. 2: THE CONTENT OF TANSHINONE IIA IN SALVIA MILTIORRHIZA WITH AM FUNGI UNDER DIFFERENT SELENIUM LEVELS

Selenium was a trace amount element whose physiological function was complex, which could adjust the dynamic life activities of plants and animals, and had a closely relationship with plant health 15. While the Chinese herbal medicine enriched with selenium was regarded as selenium drug, not only could improve the human selenium deficiency, but also enhance the efficacy of Chinese herbal medicine themselves. Qiang Liu 16 analyzed forms of selenium systematically in the selenium enriched Salvia miltiorrhiza, obtained that the supplementation of selenium could increase the content of Cu, Ni, Mn in Salvia miltiorrhiza. Wenbo Zhang 11 researched the secondary metabolites in selenium enriched plants, showed that Se accumulated cultivation  could improve the content of tanshinone A and salvianolic acid B, and enhance antioxidant activity of the two in vitro.

In this experiment the growth of Salvia miltiorrhiza increased firstly and then decreased with the addition of selenium, showed that higher concentrate selenium inhibited the growth, while suitable concentration (Se1~Se2) promoted. But selenium could not improve the content of chlorophyll and protein, which may be related to the differences between species or the combination of selenium and protein in vivo 17. The distribution law of selenium is stems and leaves＞ roots, which are determined by mass fraction of selenium in roots, stems and leaves of Salvia seedlings. First of all, selenium is enriched in the organs which are near the source of selenium, probably due to the use of spraying selenium on leaves.

CONCLUSION: According to the experimental results, AM fungi and selenium have a significant interaction effect for Salvia, the optimal conditions for planting in the experiment turn out to be that the AM fungi is inoculated, and the mass concentration of selenium is about 20~40 μg.ml-1, it has important significance for improving the quality of Salvia, ensure that Danshen medicinal value, and to realize the modernization of planting traditional Chinese medicine.

ACKNOWLEDGEMENTS: The authors thank to college of pharmaceutical sciences, Hebei University for providing all the facilities to carry out this work.