Objective: To determine the effect of amlodipine on blood glucose levels through oral glucose tolerance test in normoglycemic albino Rats and the magnitude of its effect on basal v/s glucose induced glycemic value compared to control.

Methods: Rats were divided into  control and  test groups to study  the effect of glucose induced glycemic changes in  normal rats following oral administration of amlodipine. The control group  received 1 ml of distilled water everyday, test group  received amlodipine everyday in the dose of 1.5 mg/Kg BW for 3 days.On the third day, 2 hours after drug administration both groups were administered oral glucose in the dose of 0.6 gm/Kg BW. The blood glucose levels were measured at 0, 60 and 150 minutes after glucose administration by rat tail snipping method using ACCUCHEK glucometer.

Conclusion: Amlodipine worsens glycaemic control in normal rats at all hours of glucose challenge. Extending this to human beings, whether with impaired glucose tolerance or overt diabetes mellitus, it is suggested to limit the use of amlodipine to situations unless absolutely necessary since it induces hyperglycaemia even in normoglycaemic rats by a postulated mechanism of inhibition of both basal and glucose induced insulin secretion significantly.

INTRODUCTION: Diabetes mellitus (DM) consists of group of syndromes characterized by hyperglycemia; altered metabolism of lipids, carbohydrates, and proteins; and an increased risk of complications from vascular disease 1. The pathophysiology of the disease is complex, with association at various degrees of an insulin-resistance state,  defect in insulin-secretion and  loss of β cell mass and perhaps  modification in postprandial hyperglycaemic kinetics 2.

In spite of the introduction and extensive utilization of hypoglycaemic agents, diabetes and the related complications continue to be major health problem worldwide 3. According to International Diabetic Federation the estimated diabetes prevalence for 2010 has risen to 285 million, representing 6.4% of the world’s adult population, with a prediction that by 2030, the number of people with diabetes will have risen to 438 million.

India has been declared as the “Diabetic capital of world”. Currently 40.9 million people in India suffering from diabetes and by 2030 there would be 79.44 million diabetics in India alone. It is estimated that by the year 2030, diabetes is likely to be the seventh leading cause of death accounting 3.3% of total deaths in the world 4.

Both type 1 and type 2 diabetes are known to be multifactorial diseases caused by a combination of genetic (inheritance) and environmental (diet and lifestyle) factors. In fact, chronic hyperglycemia has been established to be the principal cause of diabetic microvascular and macrovascular complications along with the total duration of diabetes 5.

Hypertension is a common condition among diabetic patients. Hypertensive diabetics are about twice as likely to experience cardiovascular events as nondiabetic counterparts. Cardiovascular disease accounts for 40 percent of overall mortality in the United States and is the leading cause of death among persons with type II DM 7. Treatment of hypertension is strongly recommended in subjects with type 2 diabetes, in whom blood pressure goals are set at levels lower than nondiabetic individuals. As a consequence, the choice of antihypertensive agent is a daily task for diabetologists and practitioners 8.

Such a choice should carefully take into account the expected benefits and potential adverse effects of available medications. In this respect, much emphasis has been given in recent years to the undesirable metabolic effects of some largely used antihypertensive agents like  β-blockers or thiazide diuretics  associated with a deterioration of glucose tolerance and a more atherogenic serum lipoprotein profile. Among available antihypertensive drugs, angiotensin converting enzyme inhibitors seem to be devoid of unfavorable effects on glucose and lipid metabolism. As for calcium channel blockers, their effects on glucose/lipid metabolism in type 2 diabetes are poorly understood 8. Calcium-channel–blockers are indicated for the treatment of a variety of cardiovascular diseases, including angina pectoris, systemic and pulmonary hypertension, certain cardiac arrhythmias, and Raynaud’s phenomenon. At present, CCBs are among the most frequently prescribed antihypertensive medications in the country 9.

However, although CCBs are an important part of the therapeutic armamentarium against cardiovascular diseases, concern has been aroused about these drugs, particularly short-acting dihydropyridine derivatives.

Recent studies have focused attention on the possibility that some of these agents may increase the risk of cardiovascular events in patients without diabetes. Despite their potential benefits, much controversy has arisen recently regarding calcium-channel blockers 7.

In the Fosinopril Amlodipine Cardiovascular Events Trial (FACET), the relative benefits of fosinopril and amlodipine were compared in 380 hypertensives with non-insulin dependent diabetes. The patients receiving fosinopril had a significantly lower risk of major cardiovascular events than those receiving amlodipine 10.

In 1995, a meta-analysis suggested that short-acting dihydropyridines may provoke rather than prevent myocardial infarction in patients with coronary heart disease. This study sparked a controversy, which has been fueled by a series of articles and commentaries suggesting that CCBs, including second-generation dihydropyridines, such as amlodipine and nisoldipine, may be harmful, particularly in patients with hypertension and diabetes mellitus 11.

Insulin released from resting cell is minimal. The rate of insulin secretion at any glucose concentration is high. Insulin is secreted from the human pancreas by glucose entry into the β cell through GLUT-2 which results in inhibition of ATP-sensitive K+ channel resulting in depolarisation of β cells. This increases Ca++ entry resulting in release of insulin by degranulation 15.

Because calcium plays an essential role in hormone metabolism and especially in carbohydrate homeostasis and glucose- induced insulin secretion, calcium channel blocking agents might also interfere with metabolic control and are likely to impair the release of insulin- basal, stimulated or challenge with glucose or by oral hypoglycaemic drugs. Data from in vitro studies and humans with insulinomas suggest that calcium antagonists may increase serum glucose levels 16. It is therefore important to look for any relation between calcium channel blockers and occurrence of hyperglycaemia. As amlodipine is the most commonly prescribed calcium channel blocker this study was planned to monitor the effect of amlodipine on blood sugar levels of albino rats 12.

Amlodipine belongs to class of dihydropyridines of calcium channel blockers. It is a long-acting drug used as an anti-hypertensive and antianginal drug both in diabetics and nondiabetics, acts by relaxing smooth muscle in the arterial wall, decreasing total peripheral resistance and hence reducing blood pressure 12.

We hypothesized that amlodipine administration may impair glucose tolerance and insulin levels after glucose challenge in normal albino rats.

The oral glucose tolerance test (OGTT) is an established method to test the integrity of β-cell function to release insulin. A glucose tolerance test involves measurement of blood glucose concentration 2 hrs after a load of 75g of glucose has been taken orally in the morning after an overnight fast lasting 10 to 16h 17.

Animals:  Adult wistar Albino rats weighing 150-200 g were used and divided into two groups control and test, each group containing 6 rats. The animals were acclimatised for 10 days before being used for the experiment. They were housed in a room with controlled temperature and a 12-hour light/12 hour dark cycle. The animals were maintained on a standard dry pellet diet and water ad libitum. The experimental protocol was approved by the institutional animal ethics committee and was executed according to the guidelines of committee for the purpose of control and supervision on experiments in animals.

Experimental Design: Rats were divided into control and  test groups to study the effect of glucose induced glycemic changes in  normal rats following oral administration of distilled water and  amlodipine respectively. The rats were fasted overnight but provided water ad libitum. The control group of rats received 1 ml of distilled water every day and the test group of rats received amlodipine everyday in the dose of 0.3mg/rat for 3 days. On the third day, 2 hours after third dose of drug administration both the groups of rats were administered oral glucose in the dose of 0.6 gm/kg BW. The blood glucose levels were measured at 0, 60 and 150 minutes after glucose administration with slight modification in OGTT by rat tail snipping method using ACCUCHEK glucometer.

Statistical Analysis: The effect of the drug under study was presented by calculating mean and S.D of the outcome parameters. One way analysis of variance (ANOVA) and independent sample T tests were applied to see the differences between any two groups at a time. Tests of significance were carried out at 5% level. SPSS for windows (version 16) was applied in the statistical analysis. 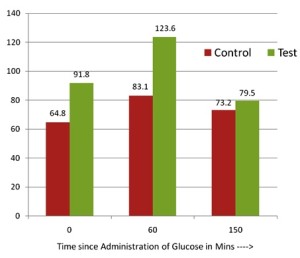 FIGURE 1: DEPICTING THE % CHANGE IN CBG LEVELS OF TEST AND CONTROL GROUPS AT DIFFERENT TIME INTERVALS 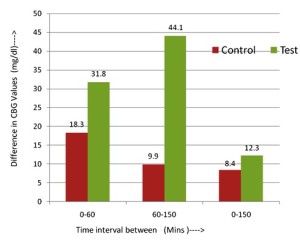 FIGURE 2: DIFFERENCE BETWEEN CBG VALUES OF TEST AND CONTROL AT DIFFERENT TIME INTERVALS

Bar Diagram showing difference in blood glucose levels between various time intervals of 0-60, 60-150 and 0-150 minutes among control and amlodipine group 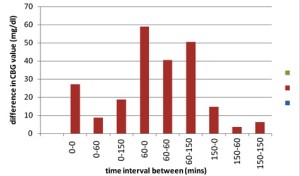 So the implication is that as amlodipine affects both basal and glucose induced insulin secretion, the use of amlodipine is to be justified in non-diabetics, prediabetics, high risk diabetics and diabetic patients.

Because of the above demonstrated hyperglycaemic effect of amlodipine, it may be advisable to minimize the use of this in diabetes mellitus as it may worsen glycaemic control in well controlled as well as uncontrolled diabetes mellitus. Also using this with other OHGs may need dose escalation of the OHGs to compensate glycaemic control worsening caused by amlodipine mediated inhibition of insulin secretion after a thorough clinical trial in human population. This study adds a modest word of caution against use of Calcium channel blockers especially amlodipine in diabetes mellitus unless absolutely necessary.

CONCLUSION: Amlodipine worsens glycaemic control in normal rats at all hours of glucose challenge affecting both Basal & Induced Insulin secretion. Extending this to human beings, whether with impaired glucose tolerance or overt diabetes mellitus, it may be suggested to limit the use of amlodipine to situations where it is absolutely necessary since it induces hyperglycaemia even in normoglycaemic rats by a postulated mechanism of inhibition of both basal and glucose induced insulin secretion significantly.