ABSTRACT: Introduction: Angiotensin-converting enzyme (ACE) inhibitors are a class of potential drugs used as first-line agents for the treatment of hypertension and heart failure in physiologically young patients despite its side effects. Apart from the other common side effects, they are known to induce bradykinin release which alters vascular permeability leading to pancreatic edema resulting in intrapancreatic entrapment of enzymes, toxins and acute pancreatitis. Objective: To determine the effect of long term ACE inhibitors use on serum amylase and lipase levels. Methods: A total of 122 patients were divided into two groups as case and control group, were case group the patients using ACE inhibitors for more than 8 months, and control group is the patients who are on other antihypertensive. Pancreatic enzyme levels were measured by ELISA method, and the elevation of pancreatic enzymes was determined in both the group and compared by Unpaired T-test. Results: Study showed a significant difference in amylase levels between case and control groups (P≤0.002) and Lipase level among case and control groups (P≤0.003). Further, confounding factors were adjusted on ACE inhibitor usage. Conclusion: The use of ACE inhibitors showed a significant association with elevated serum amylase and lipase levels in hypertensive patients. Our study suggests the monitoring of serum amylase and lipase levels in patients who are on ACE-inhibitors and its administration must be stopped as soon as an increase of serum amylase and lipase is evident for causing acute pancreatitis.

INTRODUCTION: Angiotensin - converting enzyme (ACE) inhibitors are a class of potential drugs used as first-line agents for the treatment of hypertension and heart failure in physiologically young patients 1. Despite their profound established role in ensuring adequate control of blood pressure, their use is limited because of associated adverse events.

ACE inhibitors generally induce bradykinin release and thereby causing a nocturnal dry cough and generalized angioedema that is often manifested in lips, tongue and upper airway 2, 11. Also, several clinical case studies across the globe have demonstrated a close association between ACE inhibitor use and acute pancreatitis 4, 12.

It has been postulated that ACE inhibitors elevate bradykinin levels by inhibiting their degradation, this is known to cause vascular permeability, therefore precipitating the risk of angioedema in several blood vessels, lymphatic’s and pancreatic duct. Pancreatic edema results in intra-pancreatic entrapment of enzymes, toxins are leading to acute pancreatitis.

Subject Selection: Our study was designed as a prospective cohort for 6 months (December 2017-May 2018). A total number of 122 patients were recruited who signed informed consent, from Employee State Insurance Corporation Multi-specialty Hospital based on the study’s inclusion and exclusion criteria, among which 61 patients diagnosed with hypertension and are on ACE inhibitors at least for a period of 8 months were under the case group and patients diagnosed with hypertension and are not on ACE inhibitors were under the control group.

Inclusion Criteria: Patients of both gender within the age of 18-55 years diagnosed with hypertension as per JNC-8 guidelines and are on treatment either with ACE inhibitors monotherapy or regimens containing ACE inhibitors at least for eight months and willing to provide written informed consent during enrolment will be included into the study.

Exclusion Criteria: Patients diagnosed with hypertension and are on treatment with ACE inhibitors for a period of less than eight months and those who have acute or chronic pancreatitis (based on USG-abdomen, baseline serum amylase (>100U/L) and lipase levels (>38U/L)), pancreatic cancer of any origin or pancreatic metastasis, type I diabetes mellitus, renal impairment (GFR not less than 30% from baseline value), or any other pancreatic diseases were excluded from our study. Vulnerable patients and special population were also excluded.

Procedure: Approval of study protocol by the Institutional Ethical Committee (Ref: VISTAS-SPS/IEC/III/2017/02) of VISTAS was obtained before commencement. Blood samples were collected from patients of both the groups by vein puncture method, where the site of injection was cleaned with cotton swab using spirit. Estimation of amylase and lipase in serum matrix was carried out using enzyme-linked immune sorbent assay.

Statistical Analysis: All statistical analysis was carried out using IBM-SPSS 21.0and Graph Prism. Relationship between the long term use of ACE inhibitors and the incidence of pancreatitis was determined using Chi-Square analysis. Effect of confounding variables on ACE inhibitors use causing pancreatitis was determined using Odds ratio. And both the groups on and without ace inhibitors usage were compared using independent t-test analysis.

Table 1 shows, alcoholics were more, and smokers were less in case group compared to that of the control group. Various comorbid conditions were identified among both the groups as shown in Table 2. Table 3 and 4 show the difference in elevated amylase and lipase level in case and control groups Fig. 3 and 4. Various confounding factors were identified in the study that would lead to an elevation in pancreatic enzyme levels in serum other than the use of ACE inhibitors, and their effect was nullified by odds ratio as shown in Table 7 and Fig. 8.

TABLE 1: DISTRIBUTION BASED ON SOCIAL HABITS

TABLE 2: DISTRIBUTION BASED ON COMORBIDITIES 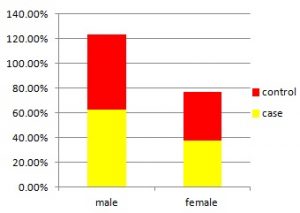 FIG. 1: DISTRIBUTION OF CASE AND CONTROL GROUPS BASED ON GENDER

TABLE 5: ANALYSIS OF FACTORS PREDISPOSING PATIENTS TO ELEVATION OF PANCREATIC ENZYME LEVELS AND CONFOUNDING THEIR EFFECT 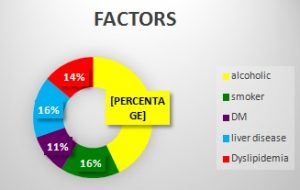 This release can result in pancreatic edema, causing enzymes and other toxic substances to be trapped within the pancreas and leading to tissue damage in the pancreas and acute pancreatitis 1. This supports the notion that localized tissue edema may be an important pathogenic factor. With the increasing use of ACE inhibitors, the incidence of rare adverse effects such as potentially lethal pancreatitis is likely to increase. Clinicians should thoroughly review patients, complaints of abdominal pain (and other symptoms associated with acute pancreatitis) and their possible association with ace inhibitor therapy 11.

The mechanisms of these factors causing pancreatitis are still unknown, but various common theories have been proposed. A few laboratory studies show the mechanism by which smoking contributes to pancreatic injury or by which smoking accelerates the pancreatic inflammatory process and have found that activation of multiple signal transduction pathways due to nicotine exposure results in high levels of intracellular calcium release and may be responsible for cell cytotoxicity and cell injury in pancreas 9.

According to the most common theory, the excess of triglycerides is hydrolyzed by pancreatic lipase, and free fatty acids (FFAs) are formed in high concentrations. This FFAs overwhelm the binding capacity of albumin and self-aggregate to micellar structures with detergent properties. Thus, acinar cell and pancreatic capillary injury are promoted. The resultant ischemia creates an acidic environment, which further enhances FFA toxicity 6, 7, 10. A further underlying pathophysiological principle may be hyperviscosity due to elevated levels of chylomicrons. Hyperviscosity due to hyperchylomicronemia supposedly leads to ischemia and acidosis in pancreatic capillaries.

Additionally, there is evidence that FFAs damage the endothelium and, thus, acute pancreatitis may be associated with (micro-) thrombosis and further ischemia 8. Endoplasmic reticulum stress has also been implicated in hyperglycemia 4. Other studies showed the effects of alcohol on the pancreas are most likely due to direct toxic effects of its metabolites (such as acetaldehyde and fatty acid ethyl esters), and the by-products of ethanol metabolism such as reactive oxygen species.

Recent experimental evidence indicates that endotoxinemia (known to occur in alcoholics secondary to an alcohol-induced increase in gut mucosal permeability), may be an important cofactor in alcohol-related pancreatic injury. The three major cell types in the pancreas affected by alcohol exposure include acinar cells, ductal cells, and stellate cells; damage to these cells drives the acinar cell death, calcification and fibrosis of alcoholic pancreatitis 2.

ACKNOWLEDGEMENT: The authors would like to thank Chairman Iswari. K. Ganesh of VISTAS and Physicians of the tertiary care hospital for their constant support.