INTRODUCTION: Blood performs very many life-sustaining functions 1 and in view of these important functions, excessive loss of blood from damaged blood vessels can have lethal consequences. To forestall excessive bleeding, vertebrates have evolved a complex biochemical mechanism by which blood arrests its loss from damaged tissues called coagulation or haemostasis. The process entails formation of a platelet plug, vasoconstriction and blood clotting 2.

The coagulation process may be hastened by procoagulants or inhibited by anticoagulants, both of which may emanate from physiological or non-physiological sources. Some plant extracts, snake venom and calcium alginate are among documented non-physiological procoagulants and some of these have been applied in folk medicine to manage bleeding as is claimed about the leaf extract of Tridax procubens among the Agilla tribal population of Ado L.G.A. of Benue State in Nigeria. This research sought to verify this claim by investigating the effect of aqueous leaf extract of Tridax procumbens on blood coagulation.

The coagulation process involves a complex interaction of twenty different clotting factors in a cascade mechanism which occur by a sequence of proteolytic activations where one factor activates the next in the sequence 2, 3. Most of the clotting factors are proteins, very few are not and the ultimate reaction in the clotting cascade is the conversion of soluble fibrinogen into insoluble fibrin 4. It is this fibrin clot together with the platelet plug that block the wound and stop the bleeing.

Tridax procumbens is a common grass found in the tropical southern part of Nigeria as well as the tropical guinea savannah part of the country 5. Tridax procumbens leaf extracts have been reported to have various pharmacological effects such as antimicrobial activity against both Gram positive and Gram negative bacteria. It has also been reported to stimulate wound healing 6, 7, 8.

This study was carried out in the Department of Biochemistry of the University of Jos and the materials and method used for this study are as described hereafter.

Fresh leaves of Tridax procumbens were obtained from the university of Jos Nigeria premise. Following identification and authentication by a botanist in the same University, the leaves were rinsed in distilled water and allowed to air dry. Using a homogenizer, 250g of the leaves were homogenized and extracted in 500 mL distilled water. The homogenate was then centrifuged and the supernatant carefully decanted to obtain an aqueous extract free from suspended particles.

15 adult male, wistar-strain albino rats housed under environmentally controlled conditions and fed only standard pelletized rat feed were obtained from a commercial breeder in Jos metropolis and used for the bleeding time and clotting time experiments. 3 mL each of blood was then syringed from some of the rats and used for the clotting time experiment.

The Duke method 9 was used, in which a rat was picked at a time, the anterior surface of its clean shaven tail was thoroughly cleaned using cotton wool dabbed in 70% ethanol and with sterile disposable lancets, a 3 mm deep laceration was made on the clean shaven tail to serve as the experimental laceration. A drop of the prepared extract was delivered directly into the experimental laceration and a stop watch started immediately. Extract addition was done periodically with mopping using a blotting paper until the bleeding stopped and the time taken for the bleeding to stop was recorded as the bleeding time. A second puncture was made on the tail to serve as control laceration and the above procedure repeated only without addition of the extract and the control bleeding time recorded. Both procedures were then repeated for four other rats. The mean bleeding times for the experimental as well as control lacerations were calculated and compared using t-test.

The Lee and White method 9 was used. 10 pyrex glass test tubes were arranged in 5 pairs and marked experimental sample tube and corresponding control sample tubes. To the first pair of tubes, 1mL each of freshly collected rat blood was added and 1 drop of the prepared extract was quickly added to the blood in the experimental sample tube but not to the control sample tube. Both tubes were carefully shaken and the stop watch started immediately. After 2 minutes, both tubes were then observed at 15 seconds intervals by very gently tilting them to see if the blood had clotted completely.

Clotting was considered to be complete when the tube could be inverted without significant movement of blood in the tube. The time taken for the blood in each tube to clot (i.e experimental and control clotting times) were recorded to the nearest 15 seconds. The procedure was then repeated for the remaining pair of pyrex glass tubes and the mean clotting times for both experimental and control samples compared by t-test. For the effect of varying dose of the extract on clotting time, the clotting time experiment just described was again repeated only this time without control tubes and the amount of the extract added to the blood was varied as follows: 0.05 mL, 0.1 mL, 0.15 mL, 0.2 mL and 0.25 mL respectively and the resulting clotting times recorded. Clotting times obtained with the extract were plotted against the dosage of the extract used and the correlation coefficient r, was then calculated.

The extract was then heated to boiling point, allowed to cool and then used to repeat the bleeding time experiment and the mean bleeding time due to the heated extract recorded. 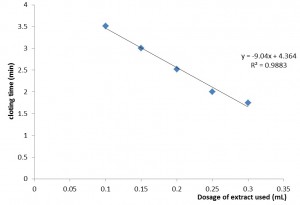 The mean bleeding time without the extract in this experiment was 2.23 + 0.06 mins and that obtained with the heat-treated extract was 1.15 + 0.05 mins. A t-test comparison at 0.05 level of probability gave the calculated t value as 27.66 and the tabulated t value as 1.86 thus showing both means to be significantly different and that, the heat-treated extract produced a significant decrease in bleeding time. This indicate that the extract retained its activity even after heating. This suggests that the active principle(s) is not a protein but may be an inorganic molecule or other small molecule that acted as a prothrombin activator.

In general, the results show that mean bleeding time and clotting times obtained with the extract are approximately one half of their respective observed values without application of the extract to wound or blood respectively. This suggests that some step(s) in the clotting cascade may have been shunted. This is most likely the step(s) involved in the formation of prothrombin activator Xa. Thus implying that, both the intrinsic and extrinsic pathways are skipped. This is because, the clotting factors involved in these pathways occur in trace amounts in blood unlike prothrombin and fibrinogen which occur in large amounts. It is thus likely that the extract may be exerting its procoagulant effect by rapid activation of prothrombin to thrombin thus increasing the rate of fibrinogen activation to fibrin and in the process promotes transglutaminase accumulation and activity via thrombin. Tridax procumbens extract being non-physiological, is most likely to activate prothrombin by a mechanism different from that of factor Xa as is the case with other non-physiological procoagulants such as calcium alginate10.

A second possibility also exist since the rate of blood coagulation also depends on the balance between procoagulants and anticoagulants present in blood 11, the extract may be acting by inhibiting physiological anticoagulants such as heparin, antithrombin III, etc which are found in blood.

ACKNOWLEDGMENT: Technical assistance was provided by technologists of the Physiology and Botany and Biochemistry Departments of the University of Jos, Nigeria.