Present study deals with effect of Vit. C against lead toxicity animals were divided into three groups of six rats each. One group of served as control which received only vehicle, second group was given lead acetate at a dose level of 0.3mg/ml for 7, 14 days chronically and third group received Vit. C (0.15mg/100ml) along with lead acetate and result were analyzed for hematological parameter i.e. RBC, WBC count and haemoglobin. It was noticed that hematological parameters were reduced due to lead acetate-treatment but when Vit. C was given along with lead the values tend to be normal at 14 days which suggest that Vit. C is a good antioxidant is overcome lead toxicity.

INTRODUCTION: Lead is naturally occurring bluish – gray metal found is small amount in earth crust. It has no characteristic taste or smell. Lead can combine with other chemicals to form, what are usually known as lead compounds or lead salt. Some lead compound dissolve in water better than others. Some natural and manufactured substances contain lead but do not look like lead in its metallic form. Organic Lead was widely used in the United States an Anti-knock addictive in motor vehicle fuels until the U.S. Environmental Protection Agency initiated a phase out of liquid gasoline in the early 1970. By 1988 the total lead used in gasoline had been reduced to 1% of the 1970 level and in 1996, the use of lead in fuel for on road motor vehicles was totally banned. Lead (Pb) has been known for centuries to be a cumulative metabolic poison. Its continuous exposure to low concentration of the metal as a result of adverse health effects.

Lead is ubiquitous and is a characteristic trace constituent in rocks, soil water, plants, animals and air. More than 4 million tons of Pb is produced world wide each year, mostly for the storage batteries, gasoline, additive, pigments, alloys and ammuniation. For the last 40 years due to anthropogenic activities has resulted in an increase in Pb residue throughout the environment, which has equilibrium of the biogeochemical cycle, Pb is neither essential nor beneficial to living organism and data reveals that it effects adversely the metabolism, reproductive system, renal system, hematopoietic, vascular and nervous system as well as behaviour 1. There is a fundamental difference in approach between the toxicologist and the eco-toxicologist concerning the appraisal of the potential threat posed to chemicals. The toxicologist, because his concern is with human health and welfare is preoccupied with any adverse effect on individual, whether or not they have ultimate effect on performance and survival. When lead exposure during growing period when spermatogenesis is proceeding might result in reproductive impairment during adulthood 2. Vit. C is a well known antioxidant. Water-soluble antioxidant vitamins are essential to the body’s health. When bound to other nutrients for example calcium lead etc it is referred to as “Calcium ascorbate”.

As an antioxidant, it inhibits the formation of nitrosamines (a suspected carcinogen). Vitamin C is important for maintenance of bones, teeth, collagen and blood vessels (capillaries), enhances iron absorption red blood cell formation, helps in the utilization of carbohydrates and synthesis of fat and protein, aids in fighting bacterial infection and interacts with other nutrients. It is present in citrus, fruits, tomatoes, potatoes and fresh, green leafy vegetables etc.

Antioxidant: Vitamin C of Merck India Ltd is to be used.

Chronic Toxicity Study: The experimentation was initiated only after the approval of Animals Ethics Committee (IAEC/CPCSEA- 716/02/9). Four groups of animals, each of 6 were maintained; I group received only vehicle and served as Control. II group received Lead Acetate at a dose level of 0.3mg/ml. Group III received Vitamin C only at 0.15mg/100ml and Group IV received Lead Acetate along with Vit. C for 7 and 14 days.

Haematological Study: Animals were anesthetised after 24 hours of last treatment and blood was collected from retro-orbital plexus of rat eyes in heparinised sample bottles with the help of capillaries and performed following haematological parameters i.e. RBC, WBC from Nauber’s Chambers and Haemoglobin percentage from Sahli’s apparatus. 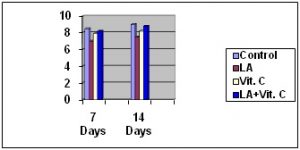 FIG. 1: GRAPH SHOWING EFFECT OF LEAD ACETATE AND VITAMIN C IN RBC COUNT OF ALBINO RATS WITH RESPECT TO THEIR CONTROL GROUP

FIG. 2: GRAPH SHOWING EFFECT OF LEAD ACETATE AND VITAMIN C IN WBC COUNT OF ALBINO RATS WITH RESPECT TO THEIR CONTROL GROUP 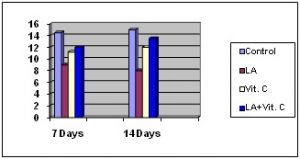 FIG. 3: GRAPH SHOWING EFFECT OF LEAD ACETATE AND VITAMIN C IN HB% OF ALBINO RATS WITH RESPECT TO THEIR CONTROL GROUP

Statistical Analysis- Results were analyzed statistically using one- way Analysis of one way Variance (ANOVA) followed by Turkey’s multiple comparison tests. The minimum level of significance was set at P < 0.05.

RESULTS AND DISCUSSION: The degree to which a system, organ, tissue, blood is effected by a heavy metal toxin depends on the toxin itself and the individual degree of exposure to the toxin. All control animals had mean blood Pb levels consistently < 3ug/ml. In present study, we observed that Lead Acetate treated group of animals at a concentration of 0.3mg/ml for 7 and 14 days chronically, showed significant decreases in the number of RBC and percent of Hemoglobin in blood of albino rats (Graph 1 & 3) because Lead can causes harmful effect to certain types of blood cells, including reduced Haemoglobin production and reduced life span and function of RBC, has been associated with low level exposure to inorganic Lead in the work place (Manser et al, 1990). Similar results were reported by Del et al (1982) also due to Lead content in whole blood. However, Hudson et al (1977) reported the exposure of Lead at a concentration as low as 0.013mg/litre, led to increase in WBC numbers, decrease in RBC volume, decrease in blood cells iron content and decrease of RBC amino levulinic acid dehydratase activity (Delta-ALAD). Haemoglobin is the molecule which transport O2 to body tissues with moderate exposure, anemia has been observed in Lead exposed workers. Schutz and Skerving (1976) reported inhibition of several enzymatic steps in the synthesis of haemoglobin. Similarly, Rice et al (1997) evaluated the long- term effect of Lead exposure on hematology and blood biochemistry. However, Klauder et al (1977) reported anemia due to Lead intoxication. Christensen et al (1977) also reported that there were significant decreases in blood Hb levels after exposure to Lead at 59ug/litre or more after two and eight weeks.

In the present study, the treated group which received the Vitamin C along- with Lead Acetate at concentration of 0.15mg/100ml, showed that Vit. C tends to overcome the Lead toxicity because Vit. C is a good water soluble antioxidant agent and helps in detoxifying and reducing drug cravings. It has been well established that better iron absorption occurs from both plants and animal’s sources when Vit. C is taken at the same time, whether from foods or as a supplement 10.

But at the same condition and duration Lead acetate treated animals showed significant increase in number of WBC in blood of albino rats (Graph 2) because whenever any toxicity or toxification occurs in body, the body immune system enhances the production of WBC. However, Hogan et al (1979) reported Lead induced leukocytosis in female mice. Scientist also found effect of chronic exposure to sub lethal concentration of Lead Acetate on heme synthesis and immune function in red tailed hawks. While the group which received Vit. C along- with Lead Acetate again overcome the Lead toxicity and maintained the number of WBC in blood. Vitamin C is a powerful antioxidant that protects against infection and body immune system. Similarly, Pande et al (2001) reported combined administration of a chelating agent and on antioxidant in the prevention and treatment of acute Lead intoxication in rats. This also supports author’s findings. Thus it is concluded that Lead Acetate is highly toxic compound; which causes decrease in number of RBC, reduced the level of Haemoglobin and increases the number of WBC. While Vitamin C act as a good antioxidant and overcome the Lead Acetate toxicity to certain extent.

ACKNOWLEDGEMENT: Authors are thankful to Head, Department of Zoology, Bundelkhand University, Jhansi for providing facilities for experimentation and Supervisior, for their proper Guidance and Moral support.