EFFECT OF BISPHENOL-A ON THE CARDIOVASCULAR SYSTEM IN PREGNANT RATS

EFFECT OF BISPHENOL-A ON THE CARDIOVASCULAR SYSTEM IN PREGNANT RATS

ABSTRACT: Bisphenol-A (BPA) is a chemical produced in large volumes worldwide and has large market diffusion in many consumer products. BPA is used mainly as a monomer in the production of polycarbonate plastics and as a precursor of epoxy resins. So the present study was undertaken to examine the toxic effect of BPA on heart function in pregnant rat models. BPA (50 mg/kg.b.wt/day and 500 mg/kg.b.wt/day) was administered for 8th to 15th day by oral-gavage. The rats were sacrificed by cervical dislocation after last treatment. Paraffin embedded heart tissue sections were stained with hematoxylin-eosin. Significant degenerative changes were observed in H&E stained heart tissue sections of test rats. The activities of antioxidant enzymes like- superoxide dismutase, catalase and glutathione peroxidase were seen to be decreased significantly in treated rats; while, the level of malondialdehyde, a biomarker of lipid peroxidation, was increased than treated rats. Up-regulation of proapoptotic protein has been reported in heart failure and myocardial infarction, to determine whether caspase-3 protein can affect cardiac function in treated pregnant rats. In conclusion, BPA inhibits ventricular function in rat presumably by producing oxidative stress induced apoptosis and causes potential cardio toxicity.

INTRODUCTION: BPA is an environmental estrogenic endocrine disruptor that may have adverse health impacts on a range of tissue (or) systems. It is a monomer of epoxy resins and used extensively to manufacture polycarbonate plastic products. BPA leaches out in the aqueous medium at high temperature and acidic pH 1. Exposure to BPA occurs mainly through the ingestion of food and water from containers and dental materials made up of plastics that leach BPA. Emerging evidence also points to adverse impact of BPA on the cardiovascular system 2, 3.

Here, we examined the influence of rapid BPA exposure on antioxidant enzymes, histological changes, particularly apoptosis, in rat hearts. Among the numerous chemicals discharged into the surrounding environment, BPA have been shown to increase oxidative stress in body by disturbing the antioxidant balance of cells.

An increase in oxidative stress is considered an important pathogenic mechanism in the development of various complications like cardio vascular, cerebro-vascular and peripheral vascular diseases 4. Programmed cell death (apoptosis) has been implicated in normal biological processes and in the pathogenesis of several diseases in humans 5. Recent findings suggest a role of apoptosis in heart failure. Apoptotic cardiomyocyte nuclei have been described in pressure overload and pacing-induced heart failure in animals 6, which are associated with increased Bax and decreased Bcl-2 protein expression 7. Cardiomyocyte apoptosis also can be detected in myocardial tissue of patients with heart failure resulting from idiopathic dilated cardiomyopathy 8 and other cardiac disorders 9. Caspase-3 expression is increased in association with heart failure and apoptosis in experimental animals 10 is found in its activated form in the myocardium of end-stage heart failure patients 11 and is overexpressed in the myocardium of patients with right ventricular dysplasia, a disease associated with myocardial apoptosis, progressive cell loss, and sudden death 12 indicating relevance of caspase-3 to human heart disease.

Maintenance of Experimental Animals: Healthy rats of Wistar strain were purchased from authorized vendor (M/S Raghavendra Enterprises, Bangalore, India). All rats were housed in polypropylene cages (18” 10” × 8”) lined with sterilized paddy husk, and provided filtered tap water and rat food ad libitum in an air-conditioned environment (25 ± 2 °C) with a 12-h light and 12-in dark cycle. The experiments were carried out in accordance with the guidelines of the committee resolution no. 04/(i)/a/CPCSEA/ IAEC/ SVU/ KY- KPR / Dt. 28-03-2011 for the purpose of control and supervision on experiments on animals 13.

Experimental Protocol: Female Wistar rats three months old, weighing 250 g to 300 g were used for the experiment. The status of estrous cycle stages were determined every morning between 7:00 am by collecting of vaginal secretion with a plastic pipette filled with 10 μl of normal saline (NaCl 0.9%) by inserting the tip into the rat vagina. One drop of vaginal fluid was placed on glass slides the unstained material was observed under a light microscope, without the use of the condenser lens, with 10x and 40x objective lense. Two females of pro-estrous stage were paired with a male overnight and the next morning, males were removed and females were assessed for the presence of sperm in the vaginal flush. Animals with positive sperm in the flushes are designated as day-1 of gestation. Six pregnant rats were used in each experimental group.

Treatment: BPA was given orally on 8th to 15th day of gestation period (total 8 days) of female albino rats. After that animals were sacrificed and took the serum and selected tissues were isolated for further investigations.

Reagents and Chemicals: All the reagents used were of analytical grade. Bisphenol-A (BPA) was purchased from SD Fine chemicals, Bombay and 5, 5’-dithiobis-2-nitrobenzene (DTNB), oxidized and reduced glutathione, NADPH. Na4 were procured from SRL, India. Eosin and Hematoxylin were procured from Merck, India.

Tissue Collection: After the completion of the treatment duration of 8 days, the animals were sacrificed by cervical dislocation on the 24th hour after completion of the last dose. The heart tissue was removed and a segment of the ventricle was washed in ice cold phosphate buffer solution, dried and stored in -20 ºC for further biochemical studies. The rest of the ventricle was washed in buffer and kept in Neutral buffer formalin for further histological study.

Histological Study: NBF fixed and paraffin impregnated ventricular tissue sections were stained with normal hematoxylin-eosin stain according to the method of Bancroft et al, 2002 20 with slight modifications. Briefly, 5 μm paraffin section was kept sequentially in xylene and graded ethanol and stained with hematoxylin for 2 min. After removing the excess colour the slide was counterstained with eosin and then the stained slides were dehydrated with graded ethanol, cleared with xylene and mounted with DPX and were observed under the microscope (400X magnification). Images were obtained by digital SLR Olympus Camera (E-620) fitted with Olympus light microscope (CH20i).

Western Blot Analysis: Tissues collected were homogenized with ice-cold homogenizing buffer (50 mM Tris-HCl, 150 mM NaCl, 1 mM EDTA, and 0.5mM Triton X-100, pH 7.4). Heart tissue protein lysates (50 μg/well) were separated by SDS-PAGE (12.5%) under reducing conditions with bovine serum albumin as a standard and transferred to a Nitrocellulose membrane (NCM) membrane. Blocking of membranes was performed with TTBS buffer (20 mM Tris [pH 7.4], 150 mM NaCl, and 0.05% Tween 20) containing 5% non-fat dry milk for 1 h and then washed with TTBS buffer. For the detection of proteins on nitrocellulose membrane, antibodies to caspase-3 (catalog no. 9961), were diluted 1:1000 respectively. Polyclonal beta-actin antibody (catalog no. SC-9104) and monoclonal heat shock protein 60 (HSP60) antibodies (catalog no. SC-13115; Santa Cruz Biotechnology) were used at a dilution of 1:1000. Blots were exposed to horseradish peroxidase-conjugated anti-rabbit IgG (caspase-3), secondary antibodies (diluted 2000- to 5000-fold) for 1 h. The anti-rabbit IgG secondary antibody was purchased from Santa Cruz Biotechnology. The blots were rinsed, and the enhanced chemiluminescence reagent (ECL kit) was added and incubated for 1 min and then exposed to Hyper film ECL. The intensity of specific immunoreactive bands was quantified by an Image J software. All replicates from each group were run in one gel, and the proteins are expressed as a ratio of protein signal to the beta-actin signal. 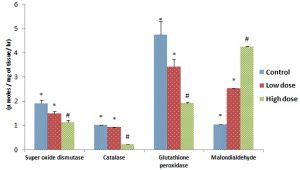 DISCUSSION: The results of the present study revealed that, tissue antioxidant capacity was significantly decreased in BPA treated groups (heart tissue sample) 22, normal level of antioxidant capacity was seen in control group. The activities of antioxidant enzymes SOD, CAT, and GPx were decreased significantly, while the levels of H2O2 generation and lipid peroxidation increased in the animals treated with BPA. Similar results were reported by Kabuto et al, 2003 23. Some free radicals are generated as byproduct of metabolism and are extremely reactive. However, biological systems have evolved endogenous defence mechanisms against these free radical induced cell damage. SOD, CAT and GPX are the primary antioxidant enzymes which directly eliminate reactive oxygen species via hydroxyl radical, superoxide radical, hydrogen peroxide etc.

The stress conditions depend on the degree of production or inactivation of these antioxidant enzymes 24. From our study it is suggested that BPA might induce the oxidative stress in ventricular myocytes by inhibiting the activities of antioxidant enzymes as a result of the accumulation of reactive oxygen species (ROS) in ventricular myocytes. The accumulated ROS in turn induces lipid peroxidation in the biological membranes 25, as revealed by the increase in MDA level in our study. In order to study the oxidative stress induced ventricular tissue damage we have observed the degenerative changes in the ventricular tissue in histological sections of ventricle of heart in BPA treated animals. The sizes of the nuclei were enlarged and the shapes were rounded in BPA treated rats. Numerous lacunae were also seen in the matrix of the ventricle 26.

The present study of results revealed that, an increase in apoptosis in heart tissue, thereby strongly inhibiting catalase activity, resulting in an increase in hydrogen peroxide, and that the oxidative stress elicited by excess H2O2 might activate caspase-3, which induces DNA fragmentation, leading to apoptosis, this is agreement with Kashiwagi et al., 1999 27. BPA administration has been shown to enhance oxidative stress and lipid peroxidation promoting apoptosis in treated tissues and disrupt cell-to-cell communication, because BPA can act as a pro-oxidant induces the formation of reactive oxygen species 28 are generated the free radicals. Free radicals are cytotoxic agents that lead to significant oxidative damage after causing covalently bind to oxidize cellular macromolecules such as DNA, protein and lipid lead to cell death. Similar to our results, Hassan et al., 2012 29 demonstrated that 50 mg/kg of BPA generate ROS, but reduce antioxidant content and activity (glutathione, superoxide dismutase, glutathione peroxidise). Then BPA induces over production of hydrogen peroxide, it is easily converted to hydroxy radicals 30 which causes oxidative stress in cells leads to cell death and raises apoptosis in treated tissues.

The induction of apoptosis is correlated with the activation of caspases, which have proteolytic activity and are able to cleave proteins to result in cell shrinkage, chromatin condensation and DNA fragmentation. We observed the significant increases in the activity of caspase-3 in BPA-treated rats when compared to the corresponding control group, suggesting that apoptosis is Caspase dependent. Caspase-3, a key molecular marker of apoptotic signaling, is activated by either mitochondria dependent or death receptor dependent apoptotic pathways. Previous researches reported that BPA induced mitochondria dysfunction in the isolated rat hepatocytes 31 and human HepG2 cell 32, which led us to study the role of mitochondria played in liver cell apoptosis induced by BPA. Consistent with the change of caspase-3 activity in heart tissues of BPA-treated rats indicated an involvement of a caspase dependent apoptotic pathway of apoptosis. It is evident from our study that expression of the caspase dependent apoptotic pathway could indirectly explain the observed effects of BPA on heart tissues of BPA-treated rats.

CONFLICT OF INTEREST: Authors doesn’t any conflict of Interest.