INTRODUCTION: Ceftriaxone is a broad spectrum cephalosporin resistant to various types of beta-lactamases, with potent activity against gram-positive and gram-negative bacteria, including Enterobacteriaceae, Haemophilus influenzae, Streptococcus pneumoniae and other non enterococcal streptococci, Methicillin-resistant staphylococci, Enterococci, Pseudomonas aeruginosa and Bacteroides fragilis were typically resistant 1. The drug acts through inhibition of transpeptidase enzymes responsible for the final step in bacterial cell wall synthesis and has broad stability against beta-hydrolysis 2. In human medicine, ceftriaxone is widely used, because of its prolonged terminal half-life (5.4- 8.2 h) that allows its prescription on a single administration per day basis 3, 4. So expanded informations concerning the pharmacodynamic effects of ceftriaxone will be of benefits to physicians and their patients. The present study was aimed to study pharmacodynamic aspects of ceftriaxone on isolated gastrointestinal, tracheal and uterine smooth muscles.

Drug: Ceftriaxone is a sterile, semisynthetic, broad-spectrum third generation cephalosporin antibiotic for intravenous or intramuscular administration. Ceftriaxone is a white to yellowish-orange crystalline powder which is readily soluble in water, sparingly soluble in methanol and very slightly soluble in ethanol. It was produced by Smithkline Beecham for Novartis Pharma Company (Egypt) and has the commercial name Ceftriaxone®.

The above mentioned physiological salt solutions were prepared as indicated by 5.

Glass jar bath: A glass water bath of about 750 ml capacity fitted into a metal stand in which a movable electric heater was located to maintain the temperature as required. An inner glass tube (organ bath) of 40 ml capacity passed through the bottom of the stand and was connected by a T-shaped glass tube.

Harvard Universal Oscillograph and Transducers: Two channels curvilinear oscillograph (HARVARD U.K) with an isotonic transducer (HARVARD APP LTD) which was employed for recording the effect of ceftriaxone on isolated tissues.

TABLE 2: EFFECT OF CEFTRIAXONE ON UTERINE MOTILITY OF RATS AT VARIOUS STAGES OF SEX CYCLE 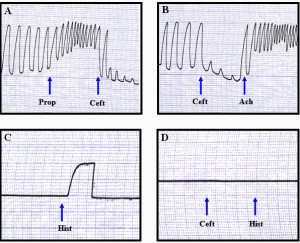 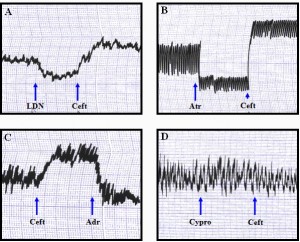 These results proved that, ceftriaxone might directly stimulate the intestinal smooth muscles of rabbit's duodenum, guinea pig's ileum and rat's colon. These obtained results were similar to those obtained by 9 who found that, cefeperazone in vitro enhanced slightly the motility of isolated rabbit's gastrointestinal tract at 0.001 g/ml. Also spontaneous motility of smooth muscle was temporarily increased with 800 mg/kg cefminox when administered intravenously and in upper doses 10.

In contrast, cefprozil did not affect the isolated smooth muscles of rat's uterus, guinea pig's ileum or rabbit's duodenum and did not influence ganglionic transmission in cats 11. Cefamandole at concentrations of 512 and 1024 micrograms/ml bath caused complete relaxation in isolated guinea pig's ileum and rabbit's duodenum, respectively 12. Maximum contractile responses to carbachol and histamine were significantly reduced in response to the ceftriaxone sodium 13.

Ceftriaxone stimulated contractility of the rat’s fudnic strip. This stimulatory effect was dose dependant. Ceftriaxone in a high concentration produce a serotonin like effect on rat's fundic strip (a sensitive preparation for detection of serotonin). These results might be attributed to the ability of ceftriaxone to release serotonin from its stores. The serotonin stimulating effect of ceftriaxone over come its direct effect on the smooth muscle of rat’s fundic strip. The obtained results came in harmony with those obtained by 14 which recorded that, cefotaxime, ceftriaxone and ceftazidime produced concentration-dependent tonic contractions of rat's fundus and 8 found that, cefamandole had stimulatory effect on the rat's fundic strips. On the other hand, ceftizoxime sodium after intravenous dose of 320 to 1000 mg/kg dose-dependently suppressed spontaneous contraction of the pyloric part in morphine-urethane-anesthetized dogs 15.

Ceftriaxone in vitro inhibited the contractility of rat's uterus during non pregnant stages (estrus and non estrus) and during pregnant stages (early and late pregnancy). The effect was dose dependant. These effects might be attributed to the direct action of the ceftriaxone on the isolated uterus. During the non pregnant  and pregnant stages, the addition of acetylcholine in a small concentration (0.25µg/ml bath) produced its stimulatory effect in the presence of ceftriaxone (256µg/ml bath) and the ceftriaxone in the same concentration, relaxed the uterus after its stimulation with 1µg propranolo/ml bath.

The obtained results were consistent with those recorded by 9 who found that, cefeperazone depressed the uterine motility in two of six experiments while during pregnancy, they found that cefoperazone might not affected or depressed and/or stimulated the uterine motility. In other observation, cefepime had no effect on the delivery status of the offspring rats 16, and 17 who found that, the spontaneous movement and tone of isolated uterus were not affected following cefbuperazone application.

The obtained results during estrus and non estrus stages were not consistent with those obtained by 12 which recorded that, concentrations of 2048 and 4096 micrograms cefamandole/ml bath caused marked stimulation in force and frequency of rat uterine muscle in all stages of sex cycle.  These differences were explained by 14 who proved that, effects of beta-lactam antibiotics on smooth muscle isolated preparations were tissue and species dependent, indicating selectivity of their action. The guinea pig's tracheal smooth muscles seemed to be insensitive to the tested concentraions of ceftriaxone. In presence of ceftriaxone, histamine was not able to produce its stimulatory effect.

The obtained results in this study was similar with those obtained by 11, 12 which recorded that, cefprozil and cefamandole respectively in different graded concentrations had no effect on the tracheal smoothe muscles. On the other hand, ceftizoxime and cefminox relaxed the resting tonus of the isolated guinea pig's tracheal chain preparation 15, 10. Cefoperazone and cefteram pivoxil respectively caused slight stimulation of the isolated guinea pig's tracheal smooth muscles 9, 18.

CONCLUSION : From the present study it could be concluded that, ceftriaxone had a stimulant effect on gastrointestinal muscles, not affected tracheal smooth muscles at graded concentrations and had a depressant effect on uterine muscles during estrus, non estrus, early pregnant and late pregnant stages.