EFFECT OF COMPACTION PROCESS IN GRANULOMETRY

EFFECT OF COMPACTION PROCESS IN GRANULOMETRY

ABSTRACT: Quetiapine is indicated for the treatment of schizophrenia as well as for the treatment of acute manic episodes associated with bipolar I disorder. The aim of the present study is to evaluate the effect of manufacturing process on critical quality attribute on In-process parameters (Granules). Quetiapine fumarate was selected as a model drug for sustained release drug delivery system manufactured by wet granulation process 1. To identify the effect of compacted Magnesium Oxide Light in the release behavior of model drug. During the study different percentage of Magnesium Oxide light compacted and granulated by using dichloromethane as granulating solvent. Other excipients with different functionality were added in the formulation such as Microcrystalline Cellulose, Lactose monohydrate, Controlled release polymer Carrageenan, Povidone and Magnesium stearate. Initially Magnesium Oxide light was compacted by using vertical type Roller compactor. From the compacted material 40%- 50% screened & 50%-60% retained over #60 mesh is optimized ratio, and this ratio must be maintained to get the targeted release of the said drug from the final uncoated Tablet. To find the release profile of the model drug, Citrate Phosphate buffer at pH 6.4-6.6 with volume 1000ml was selected as dissolution media, apparatus used is USP 2 with stationary basket

INTRODUCTION: Granulometry plays very significant role in controlling dissolution of certain drugs Particularly in extended release matrix tablets 2, in present study compaction behavior of one of the ingredient Magnesium oxide light and its particle size distribution for controlling dissolution rate of model drug with constant polymer composition has been studied, release of drug from matrix tablet depends on gelling/erosion/diffusion pattern but compacted ingredients with their defined particle size range also has its major impact on controlling drug release for certain kind of drugs. 3, 4

In the present study model drug selected is Quetiapine fumarate and is a psychotropic agent belonging to a chemical class, the dibenzothiazepine derivatives. The chemical designation is 2-[2-(4-dibenzo [b, f] [1, 4] thiazepin-11-yl-1-piperazinyl) ethoxy]-ethanol fumarate (2:1) (salt). It is present intablets as the fumarate salt. The Quetiapine Fumarate indicated for the acute andmaintenance treatment of schizophrenia, bipolar mania and bipolar depression, Since site of action of Quetiapine is CNS, so drug reaching to the site must be controlled for prolong period of time. 5, 6 Therefore, the objective of the present work is to provide a long acting pharmaceutical composition with one of the compacted ingredient within certain particle size containing Quetiapine fumarate in a sustained release matrix formulation 7, to maintain the blood levels of the active ingredient for a prolonged period of time and to avoid dose dumping.

Tablets prepared by wet granulation process. In all cases, the amount of the active ingredient was 400 mg and the total weight of the tablet was 1200 mg. The batch composition is as in Table 1

During tableting process, First magnesium oxide light is compacted using roller compactor at varying roller compaction parameters (Table 2) to obtain  magnesium oxide of different granulometry ratio coded as A, B, C and D. Each of these compacted coded magnesium oxide granules is introduced along with constant composition of excipients   and Quetiapine Fumarate into the wet granulation process. The solution of PVP K-30 in Methylene chloride as a granulating agent. The granulated material is dried in Fluid bed dryer followed by milling till desired critical material attribute is achieved for granules. The milled granules are lubricated with extra-granular magnesium stearate for specified time interval in a lab scale blender. The particle size distribution of lubricated granules is as reported in Table 4. Using D-Type punch tooling the compression is performed in 10 station compression machines. All the preparations stored in airtight containers at room temperature for further study.

Different formulation (Trial no.A to Trial no.D) Evaluated for hardness, weight variation, thickness and friability. Hardness of 10 matrix tablets from each formulation measured using Hardness tester (Erweka GMBH, TBH125 model, Germany). Friability of the tablets was determined by testing 10 tablets in a Tianjin Jing TuoYiqiCS2 for 4 minutes at 25 rpm. A slide calipers had used to measure the thickness for 5 tablets. Weight variation test has performed by taking 10 tablets using an electric balance (Metler Toledo) according to the official method.

Dissolution studies were performed using the USP I, Basket-rotating method (Electro lab dissolution tester, TDT-08, India) at 37 °C ± 0.5 °C and 2000 rpm using 0.1 N HCl in the initial 5 hours with 900 ml and phosphate buffered solution, pH 6.8 (PBS) till the end of the study 7  at 1000 ml, as the dissolution media. A 2 ml aliquot of sample was withdrawn at regular time intervals, filtered and then these samples were diluted 10 folds with distilled water and then assayed using High performance liquid chromatography. The cumulative % drug release was calculated for the formulations.

In vitro dissolution study of tablets:

Dissolution studies were shown using a tablet dissolution apparatus-II, Hanson Vision G2, type 2 (paddle with stationary basket), in 1000 mL, citro- phosphate buffer pH 6.4-6.6 at 37.5°C ± 0.5°C and stirring speed was 100 rpm. During dissolution, 10 ml of sample has taken and same amount replaced to maintain sink condition than that sample was filtered with filter paper than, the sample solution was analyzed at 250 nm for Quetiapine fumarate by UV spectrophotometer (Shimadzu 1240, UV visible spectrophotometer, Japan).

The dissolution study was continued for 24 hours,  the in-vivo condition and drug dissolved at identified time periods was plotted as percent release versus time (hours) curve. The targeted release specification was set as in Table 3;

The tablets of the projected formulations (Trial A to Trial D) evaluated for hardness, weight variation, thickness and friability. The thickness ranged from 6.41 to 6.55 mm. The hardness ranged from 230 to 250 N The %friability of all trials is less than 0.1%,. The average percentage weighted deviation of 10 tablets of each formula was less than 5%.

The compacted Magnesium oxide and lubricated final granules were evaluated for particle size distribution. The results are compiled in Table 4 and Table 5.  Particle size distribution of Magnesium oxide granules is found to be different for all the manufactured batches. The impact of different granulometry on Drug product critical quality attribute need to be studied.

Matrix tablets of Quetiapine fumarate formulated using light magnesium oxide and compacted light magnesium oxide in wet granulation technique. Different particle size distribution of light Magnesium Oxide was obtained by compaction process by using vertical roller compactor. Matrix tablet containing Quetiapine as active ingredient having Carrageenan as polymer and Light Magnesium Oxide compacted as alkalizer with particle size range from 40% - 80% with sieve #60mesh pass & #60 mesh retain 20-60% respectively of total tablet weight in the matrix tablet with the formulation code Trial A to Trial D were prepared to evaluate the effect of this alkalizer on compaction. After  manufacturing the trials shown in the Table 1, their dissolution studies were carried out in type 2 (paddle method), in 1000 mL, citro- phosphate buffer pH 6.4-6.6 at 37.5°C ± 0.5°C and stirring speed was 100 rpm. During dissolution, 10 ml of sample has taken and same amount replaced to maintain sink condition than that sample was filtered with filter paper than the sample solution was analyzed at 250 nm for Quetiapine fumarate by UV spectrophotometer (Shimadzu 1240, UV visible spectrophotometer, Japan).

The dissolution study was continued for 24 hours,  the in-vivo condition and drug dissolved at identified time periods was plotted as percent release versus time (hours) curve. The Dissolution profile data is as mentioned in Table 6. The graphical representation of In-Vitro drug release pattern for individual formulation and an overlay of all the batches are depicted in Fig. 1 – 5. 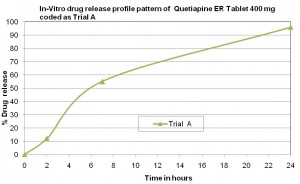 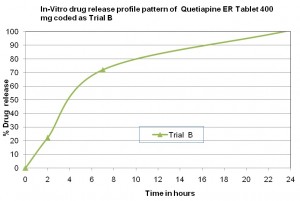 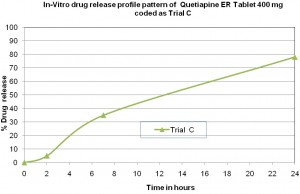 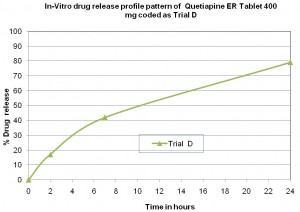 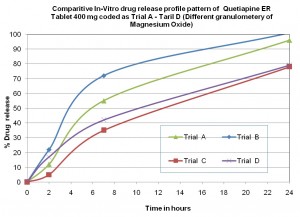 CONCLUSION:   In the present study Trial A with Light Magnesium Oxide Compacted with Granulometry Sieve #60 Passed 40-50%, & Sieve #60 retained 50-60% of total tablet weight formula has shown better drug release for desired release profile as compared to trials B, C and trial D. Some specific particle size range of Light Magnesium Oxide Compacted is required for its release controlling mechanism along with Polymer Carrageenan, for the model drug Quetiapine fumarate. The use of a stationary basket in the present study within a Type II dissolution apparatus leads to reduced variability in release data, is useful in collecting data for validation of models of drug release, and may have utility in studying the effects of hydrodynamics

ACKNOWLEDGEMENT: We are extremely gratified to Formulation development Department and fellow colleagues, for helping us in the technical aspect of the project and also for useful scientific discussions, which produced methodical results and also for sharing their passion for drug product development and thus helping us in better understanding of critical process and quality attributes for drug development.