ABSTRACT: Objective: To evaluate the hypoglycemic activity of ethanolic extracts, of Convolvulus pluricaulis in normal and streptozocin-induced diabetic rats.

Materials and Methods: Ethanolic extract of leaves of C. pluricaulis were orally tested at the dose of 400 mg/kg, 600 mg/kg & 800 mg/kg for hypoglycemic effect in normal and streptozocin-induced diabetic rats. In addition, changes in body weight, serum cholesterol, triglyceride and total protein levels, assessed in the ethanol extract-treated diabetic rats, were compared with diabetic control and normal animals.

Results: 800 mg/kg of C. pluricaulis produced a significant reduction in fasting blood glucose levels in the normal and streptozocin-induced diabetic rats. Apart from 400 mg/kg, 600 mg/kg showed activity from day 14. Significant differences were observed in serum lipid profiles (cholesterol and triglyceride), serum protein, and changes in body weight by 800 mg/kg treated-diabetic animals, when compared with the diabetic control and normal animals.

Conclusion: 800 mg/kg of C. pluricaulis exhibited significant antihyperglycemic activity in normal and streptozocin-induced diabetic rats. They also showed improvement in parameters like body weight and serum lipid profiles and so might be of value in diabetes treatment.

INTRODUCTION:Diabetes mellitus is one of the common metabolic disorders, and 2.8% of the population suffer from this disease throughout the world and it may cross 5.4% by the year 2025. Diabetes mellitus, often simply referred as diabetes, is a group of metabolic diseases in which a person has high blood sugar, either because the body does not produce enough insulin, or because cells do not respond to the insulin that is produced 1. The oral therapy of non-insulin-dependent diabetes mellitus presently relies upon compounds from two chemical classes, sulfonylurea’s and biguandies 2.

C. pluricaulis (family Convolvulaceae) is one of four plants that is referred to as Shankhapushpi, and appears to be the 'true' form of Shankhapushpi according to the Ayurvedic Pharmacopoeiawith the other three herbs (Clitorea ternatea, Evolvulus alsinoides and Canscora decussata) being used as replacements for Convolvulus 3. C. pluricaulis is medicinally used for a brain tonic, nervine tonic, alternative and laxative as well as to reduce anxiety, neurosis, cognitive decline, and has some reported usage for fertility and seminal issues 4. C. pluricaulis contain convolamine, Scopoletine, Ceryl alcohol, β-sitosterol, palmitic, myristic, and linoleic acid 5.

Extraction of plant material: Leaves of C. pluricaulis was air dried in the shade and coarsely powder by using grinder. The powder plant material (300 gm) was packed in the Soxhlet apparatus and continuously extracted by ethanol at the temperature 70°C. The percentage yield was calculated against 300 g of powder drug. It was 11.89%.

Experimental Animals: Experiments were performed on adult male Wistar rats (body weight range 150–200 g), 10 to 11 weeks of age. Animals were housed and maintained at 22°C under a 12-h light/12-h dark cycle, with free access to food and water. Experiments were carried out during the normal light/dark cycle, always starting at the same hour (10:00 AM). Efforts were made to minimize animal suffering and to reduce the number of animals used. After randomization into various groups and before initiation of experiment, the rats were acclimatized for a period of 7 days under standard environmental conditions of temperature, relative humidity. All experiments complied with the guidelines on ethical standards for the investigation in animals. The experimental protocol was approved by the Institutional Animal Ethics Committee of the Bundelkhand University. (Reference number BU/Pharm/IAEC/12/025).

Acute oral toxicity studies: Acute toxicity studies were performed on albino wistar rats according to Organization for Economic Co-operation and Development (OECD) – 425 guidelinesthe animals were kept fasted for 2 hours with free access to water. The C. Pluricaulis extract were administered orally at a dose of 50 mg/kg. The dose at which mortality was observed in two out of three albino Wistar rats, it was considered as toxic dose 22.However, if no mortality was observed, the procedure was repeated with higher dose such as 100, 300, 500, 2000, 5000 mg/kg body weight. Toxic manifestations like abnormal motor activity, alteration in water or food intake, respiration, sedation and moribund stages were observed for 6 h and mortality for 24 h. There was no mortality amongst the graded dose groups of albino Wistar rats up to a dose of 5000 mg/kg for duration of 72 h. This finding probably suggests that C. puricaulis extract are relatively safe or non-toxic in albino Wistar rats at the doses used for this study.

Assessment of Extracts of C. pluricaulis on Normal Fasted Rats: For the normoglycemic study, rats were divided into five groups (n=6) and were administered 2% gum acacia solution, Metformin at the dose of (500 mg/kg) 23 and ethanolic extract of C. pluricaulis at the dose of (400, 600 and 800mg/kg). The blood glucose levels were measured just prior to and 2, 4, and 6 h after drug administration 24.

Anti-diabetic activity (STZ induced model): The animals fasted overnight and diabetes was induced experimentally by a single intraperitoneal injection of freshly prepared solution of STZ (Himedia, Mumbai) at a dose of (50 mg/Kg body weight of rats) in sterile normal saline solution 25. After 72 h. blood was collected with all aseptic precautions from the tail vein of the rat under ether anaesthesia and blood glucose level were determined using the Glucometer, accucheck-COMFORT (Roche-Diagnostics) 26.

Control rats were injected with normal saline solution alone. The animals were considered as diabetic, if their blood glucose values were above 250 mg/dl on third day after the STZ injection and this was considered the first day of treatment. Fasting blood glucose estimation was done at 0, 2, 4, and 6 h after treatment. Treatment was continued for 21 consecutive days. The fasting blood glucose levels were estimated on days 0, 1, 7, 14, and 21 27.

The rats were divided into five groups with six rats in each group as follows;

These doses were given to albino wistar rats for a period of 21 days orally.

Estimation of Biochemical Parameters: After the completion of the treatment on day 21, the animals were sacrificed by cervical dislocation under mild anesthesia. Blood was collected on decapitation in two different tubes, one with anticoagulant for plasma and another without anticoagulant for serum separation. Serum and plasma was separated by centrifugation at 2,000 rpm for 15 min, and utilized for biochemical studies. The serum was analyzed for total protein (Biuret method) 28, TC, TG and HDL were analyzed by kits (Roche Diagnostics GmbH, Mannheim, Germany) on Hitachi auto analyzer. LDL, VLDL were calculated using the formula of Friedewald et al 29.

Acute toxicity study:There was no mortality amongst the graded dose groups of animals and they did not show any toxicity or behavioral changes at a dose level of 5000 mg/kg. This finding suggests that the ethanolic extract is safe or non-toxic to rats and hence dose of 400 mg/kg, 600 mg/kg & 800 mg/kg, p.o. were selected for the study. 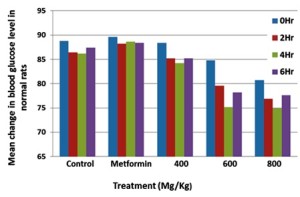 Effect of extracts of C. pluricaulis on blood glucose level in STZ (50 mg/kg i.p.)-induced diabetic rats: Administration of STZ (50 mg/Kg body weight of rats) lead to elevation of fasting blood glucose levels, Acute and chronic treatment of the extract ofC. pluricaulis (400 mg/kg) in STZ- induced diabetic rats resulted in a significant (P<0.01) decrease in the elevated blood glucose levels as compared to the control. Acute treatment with 400 mg/kg and 600 mg/kg of C. pluricaulis could not bring back the sugar to normal level. However in repeated dose treatment, 600 mg/kg extract showed significant anti-hyperglycemic activity from day 14 and 800 mg/kg extract showed significant anti-hyperglycemic activity from day 7 [Tables 2.1 and 2.2]. 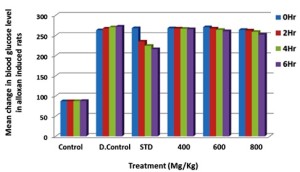 Biochemical Parameters: STZ treatment will increase the serum enzymes levels such as cholesterol, LDL, creatinine, and alkaline phosphatase and decrease the HDL  level, but Metformin (500 mg/kg) and plant extracts of C. pluricaulis reversed the above STZ induce changes.

Significant differences were observed in serum lipid profiles (cholesterol and triglyceride) and serum protein at (800 mg/kg)-treated diabetic animals, when compared with the diabetic control and normal animals (P < 0.01) [Tables 4.1 and Table 4.2]. 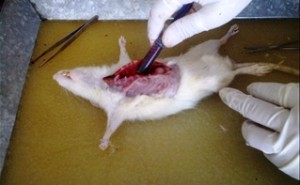 TABLE 4.1: EFFECTS OF AQUEOUS EXTRACT OF C. PLURICAULIS ON SOME BIOCHEMICAL PARAMETERS IN ALLOXAN-INDUCED DIABETIC RATS.

TABLE 4.2: EFFECTS OF AQUEOUS EXTRACT OF C. PLURICAULIS ON SOME BIOCHEMICAL PARAMETERS IN ALLOXAN-INDUCED DIABETIC RATS

In conclusion, C. pluricaulis exhibited significant antihyperglycemic activities in normal and Streptozocin-induced diabetic rats. The ethanolic extract of C. pluricaulis also showed improvement in lipid profile as well as regeneration of β-cell of pancreas and so might be of value in treatment of diabetes.

ACKNOWLEDGEMENT: Facilities provided by Bundelkhand University are gratefully acknowledged. The authors are also thankful to University Grants Commission (UGC) for providing lab facilities. We would like to thank the authorities and Vice-Chancellor of Bundelkhand University Jhansi for providing support to the study and other necessary facility like internet surfing, library and other technical support to write this Research Article.