ABSTRACT: The comparative study of in-vitro seed germination was conducted to determine the influence of different concentrations of chemically synthesized copper nanoparticles (CuNPs) on the in-vitro seed germination and growth of two different varieties of wheat- PBW677 and PBW725 on MS medium. For all growth parameters taken under the present study, PBW 725 variety of wheat performed better in the basal MS media having different concentration of CuNPs than PBW 677. 100% germination percentage of PBW 725 variety of wheat is achieved on Basal MS medium supplemented with 5 ppm CuNPs. This variety has better seed vigour and tolerance index. It indicates that a lower concentration of CuNPs is potential enhancer of seed germination of this particular variety. But the higher concentration of the nanoparticles proved to be detrimental and resulted into poor seed germination and decreased morphological development of the plants of both varieties.

INTRODUCTION: Wheat is a globally consumed cereal crop, which is a staple food in most part of Asia, Africa, and other parts of the world. Approximately 215 million hectares of land is utilized for wheat cultivation all over the world out of which around 30 million hectares of land is used in India. Wheat is commonly used as a ground, powdery form called wheat flour. It is also used in the preparation of a large variety of food products, including bread, biscuits, cakes, pies, fermented beverages like beer, breakfast cereal, etc. The crop belongs to the family of Poaceae and contains great benefits - carbohydrate 70% and protein 3% and inorganic ions 1.5-2.0%, fat 1.5-2.0%, and vitamins such as B complex and E1.

Being the most important staple food crop of India, a wide number of agricultural research programs are involved in increasing the growth and yield of this particular crop.

To increase productivity of important agricultural crops in a resourceful manner, agriculture needs to be integrated with innovating science-based technologies, and the rapid increase in the use of nanoparticles in every discipline, had brought focus on their potential to increase food production to match with the ever-growing population 2. The field of plant tissue culture and nanobiotechnology has revolutionized the entire scenario of crop improvement of wheat 3. Nanotechnology refers to the field of science that deals with matter having dimensions on the order of magnitude of 10–9 and is a rapidly developing discipline substantially influencing every field of science and biology 4, 5. Nanoparticles of gold, silver, copper, zinc, aluminium, silica, zinc oxide, caesium oxide, titanium dioxide, and magnetized iron are extensively used in agriculture 6.

Several factors like size, shape, concentration, composition etc., are responsible for nanoparticles’ reactivity with biomolecules, which enables their penetration, translocation or inhibition across the plasma membrane of the plant cell, which may leads to different responses of plants to the same nanoparticle 7, 8. Copper nanoparticles are easily synthesized in the laboratory and appear as dark brownish-red powdery substances 9. The uptake and accumulation of copper nanoparticles have a direct relation with the concentration used 10, 11, 12. They have shown both positive as well as toxic responses on plant morphology, germination and quality of produce, and transpiration, etc.

So, we have taken up the present study of the effect of copper nanoparticles (CuNPs) on in-vitro seed germination of two varieties of wheat PBW725 and PBW677 grown in the Punjab region, India. This study is the first to report the effect of CuNPs on in-vitro seed culture and can be more broadly used in other cereal crops.

Source of Explants: Seeds of two varieties of wheat (PBW725 and PBW677) were collected from Punjab agricultural university, Ludhiana, Punjab. The seeds were separately washed under running tap water for few minutes so as to remove the dust particles adhered to the surface. Seeds were treated with fungicide (15% carbendazim) for 15 min and then rinsed with distilled water three to four times 14. The surface-sterilized was done by using 0.1% of mercuric chloride for 3 min followed by washing with autoclaved distilled water two to three times to remove the residual effects of the sterilant. Surface sterilization was performed under laminar airflow conditions.

Preparation of MS Media: Different Basal MS media supplemented with vitamins, 3% sucrose and different concentration of the nanoparticles i.e., 1 ppm, 2 ppm, 5 ppm, 10 ppm and 100 ppm were prepared and Basal MS medium having all other ingredients except any nanoparticles was desig-nated as control. pH of all the media was adjusted to 5.6-5.8 by either 1 M NaOH or HCl. The media are solidified by using agar 8% and autoclaving is done at 121 °C and 15 psi for 15 min.

In-vitro Inoculation of Seeds: Surface sterilized seeds of both the varieties were placed singly on the control (basal MS media) and basal MS media having different concentration of nanoparticles using autoclaved forceps in a LAF chamber. The cultures were maintained at 25±2 °C under 16 h photoperiod with a light intensity of 2000 lux provided through white fluorescent lights.

Data Collection and Statistical Analysis: The in-vitro germination and growth of the plants were observed on control media and media having different concentrations of CuNPs for two wheat varieties. The emergence of radicles of length 2mm are considered as germinated seeds. The germination percentage was calculated after the emergence of radicals. Percent seed germination was calculated as the number of seeds germinated/Total number of seedx100. After 15 days of culture, the data for shoot length and Root length was recorded in centimeter (cm). Seed vigour index and tolerance indices for both the varieties were also calculated 15.

The experiment was carried out in a completely randomized design with ten replicates, and each individual treatment was repeated three times. Data is statistically analyzed by analysis of variance (ANOVA) tested for significance using Fisher’s protected Least Significant Difference (LSD) at p≤0.05 16.

Characterization of Copper Nanoparticles (CuNPs): To study the stability of the copper nanoparticles colloidal solution, the absorption of CuNPs was measured by UV-visible spectroscopy. The spectra of CuNPs in water for different concentrations were recorded immediately after the synthesis of particles.

For the CuNPs, no absorption in the visible range was observed, while distinct broad peaks were observed at approximately 300, 320, and 350nm, relatively same peaks at all the concentrations of CuNPs. With the addition of CTAB as a stabilizing agent, the UV spectra were shifted to lower wavelengths (300-350nm). This shift is probably due to the slight reduction of particle size by the action of CTAB. CTAB acts as a size controller, preventing aggregation of metal nuclei. Polyethylene glycol (PEG) as size controlling agent as well as the capping agent whose concentration is crucial to control the particle size distribution of nanoparticles 17. Some literature confirms the peak in the range of 500-600nm 18. The absorption peak was around 588nm, without using any stabilizing agent 19.

TABLE 2: EFFECT OF DIFFERENT CONCENTRATION OF COPPER NANOPARTICLES ON SHOOT AND ROOT LENGTH OF BOTH VARIETIES OF WHEAT (PBW 677 AND PBW 725)

For the above given table, data given is mean ±standard deviation. the value of the p <0.05, so the data is statistically significant 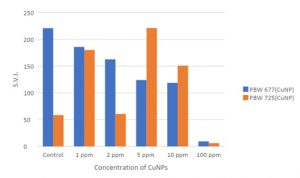 FIG. 2: TOLERANCE INDICES OF PBW 677 AND PBW 725 WITH RESPECT TO COPPER NANOPARTICLE TREATMENT

In the case of copper nanoparticle treatment, a decrease in the tolerance index (T.I.) of PBW 677 was observed with the increase of concentration. On the other hand, at 1 ppm treatment, the T.I. was higher as compared to 2 ppm treatment, but increasing the concentration beyond 2 ppm significantly increased the tolerance index of PBW 725. At 100 ppm, the T.I. of PBW 677 was lowest whereas the T.I. of PBW 725 was highest, as indicated in Fig. 2. This indicates that tolerance of PBW 725 against the toxicity generated by the high concentration of nanoparticles is better as compared to PBW 677.

Under in-vitro conditions, 50–500 mg/l copper oxide nanoparticles reduced the overall growth of Glycine max 33. It has been reported that metal and metal oxide nanostructures tend to damage the genetic material of a living cell or, simply, they can behave as mediators of DNA damage in living organisms 34. A recent systems biology approach, including omics data from tobacco, rice, rocket salad, wheat, and kidney beans, confirmed that metal NMs provoke a generalized stress response, with the prevalence of oxidative stress components 35. Generally, the toxicity of these nanoparticles depends on the size, surface charge, and pH of the environment 36. In Arabidopsis thaliana, a concentration of 0.2 mg/L of CuO NP does not affect the genetic expression of genes that elicit oxidative stress responses, sulphur assimilation, glutathione, and proline biosynthesis; however, an upregulation of the expression of such genes was observed as the concentration approached a higher scale 37. The mitotic index of actively dividing cells in Allium cepa increases at a lower concentration of copper nanoparticles and declines significantly as the concentration is increased 38. An RAPD analysis has been carried out on Cucumis sativus revealed the presence of new bands that may be exhibited due to alterations in the genetic material 39.

CONCLUSION: The present study explored the influence of chemically synthesized copper nano-particles on in-vitro germination and growth of two different varieties of wheat. Higher concentration (100 ppm) affected the plant adversely, inhibiting both root and shoot development. The germination percentage of PBW 725 did not reveal an increasing or decreasing trend in response to the varying concentrations of copper nanoparticles. However, the medium supplemented with 5 ppm CuNPs, resulted into 100% germination percentage of PBW 725, which indicates that lower concen-tration of copper nanoparticles can be potential enhancers of seed germination. Also, the growth of seedlings was enhanced at a lower concentration with respect to the control. It can be concluded that copper nanoparticles can exhibit different effects on different varieties of the same species.

Therefore, an intense experimental study is required to completely understand the effects of metal nanoparticles like CuNPs on plants, especially on agriculturally important crops and their varieties. Furthermore, molecular mechanisms of NPs on different cultivars can be investigated that can help in understanding how these nanoparticles bring a change in the physiology and morphology of the plants.

CONFLICTS OF INTEREST: The authors declare no conflict of interest. The funders had no role in the design of the study; in the collection, analyses, or interpretation of data; in the writing of the manuscript; or in the decision to publish the results.