ABSTRACT: Osteoarthritis is characterized by degeneration of cartilage and its underlying bone within a joint as well as bony overgrowth. The main causes of Osteoarthritis are abnormality in limb, in development of joint, hereditary factors, history of joint injury, stress etc. Conventionally analgesics are used to reduce the pain, inflammation, joint swelling and stiffness. But these drugs have many side effects like gastro intestinal irritation, nausea, ulcers or bleeding, fluid retention, hypertension, renal insufficiency etc. Curcumin acts as an inhibitor for COX, 5-LOX and glutathione S Transferase. It also lowers the production of histamine. Its anti arthritic action in combination with NSAID was screened in this study. Animals were divided into 5 groups. Group 1 was control group. Group 2 was disease control with the induction of arthritis using nalidixic acid 40mg/Kg subcutaneously. Group 3 was administered with standard drug Diclofenac sodium (13mg/Kg) orally. The group 4 received standard drug along with Curcumin (200mg/Kg orally). Group 5 animals received pretreatment with curcumin (200mg/Kg) before the induction of Osteoarthritis. Physical or functional parameters such as arthritis index, motor coordination, paw volume, hyperalgesia were measured. Group 4 showed better recoveries when compared to other groups and group 5 showed no or less symptoms of Osteoarthritis. It demonstrates that curcumin when used along with NSAID as an adjuvant therapy has a role in treating and also in preventing Osteoarthritis. Hence it can be included in the studies for the development of new adjuvant drug to treat osteoarthritis improving the quality of life of patients.

INTRODUCTION: Curcumin also known as golden herb is an active constituent of the rhizome Curcuma longa (turmeric) belonging to the family Zingiberaceae. Research suggests that it has various pharmacological actions like anti-inflammatory, antioxidant, anti-cancer, anti-bacterial, anti-fungal and anti-viral properties.

Quinolone antibiotics are the antibiotics which act by inhibiting DNAgyrase or bacterial topoisomerase. These antibiotics have the capacity to degenerate articular cartilage as they have high affinity towards connective tissue especially bone and cartilage. They cause blister like lesions in the cartilage and degenerates it in 24 hrs which can be represented by decreased number of chondrocytes and formation of nodules 1.

Animals: 24 female Wistar rats weighing around 180-250 g were used for this study. The animals were accommodated in standard conditions of ventilation and temperature (25±2º C), humidity (60-70%) and light/dark condition (12/12). They were housed in pathogen-free conditions. The animal procedures were conducted according to CPCSEA guidelines.

Nalidixic acid was administered at a single dose of 400mg/Kg subcutaneously.

Experimental design: The animals were allowed for stabilization or acclimatization for one week. Then they were grouped under 5 groups each containing 6 animals.

Group 1: Control group – The animals were administered with DMSO for 21days.

Group 2: Disease control – Animals were administered with nalidixic acid and observed for 48 hrs.

Group 3: Standard group- Animals was administered with nalidixic acid and after 48 hrs they were treated with NSAIDs for 21 days.

Group 4: Test group- Test Animals were administered with nalidixic acid and after 48 hrs they were treated with NSAIDs and curcumin for 21 days.

Group 5: Pretreated group- Animals were pretreated with curcumin for 21 days before the administration of Nalidixic acid.

Rota Rod Test: Motor function in osteoarthritis is altered. This test utilizes a rotating rod on to which a rat is placed. The rotating rod creates forced motor activity so as to evaluate certain parameters by measuring the holding capacity (in s). Each animal from each group was placed on the rotating rod and its fall off time is recorded. The cut off time was 5 mins.

Analgesic activity: One of the symptoms of Osteoarthritis is altered pain sensitivity 2, 3.

Therefore analgesic activity of various treatments was assessed in this study. The analgesic activity was assessed by using hot plate method or analgesiometer. Rats were transferred to the analysis area 30 mins before starting the experiment. The instrument used is analgesiometer (SISCO). The rats were placed individually on the hot plate which was maintained at 55 °C. The cut off time for all the animals was 20s. The latency time of the animal to lick its paw or to jump was measured immediately during the experiment. The number of jumping and licking responses were also recorded.

Measurement of inflammation: Edema was observed on the paws of animals treated with Nalidixic acid. All the paws of animal were considered. Paw volumes were measured using Plethysmograph by mercury displacement method 4, 5. The paw volumes were measured after completion of treatment. Percentage inhibition was calculated in drug treated groups and compared with control.

Arthritis index: Rats were evaluated on daily basis for the occurrence of nodules using macroscopic scoring system. The scale is obtained from Kokkola et al., 6, 7.

The scale used is as follows:

0= no signs of arthritis.

1= mild swelling and erythema of the paw or one digit

3= more than two joints are involved.

4= severe arthritis of the entire paw or digits.

Arthritis index was calculated by adding the scores of all the four individual paws.

Spontaneous Mobility: The spontaneous activity was measured using actophotometer. An actophotometer operates on photoelectric cells which are connected in circuit with a counter. The count recorded is displayed digitally. Each individual animal was placed in actophotometer for 10 minutes. The movement of animal interrupts the beam of light falling on a photocell which was recorded as a count by the digital display. The no. of counts was recorded for all the groups.

RESULTS: The present study was aimed to investigate the role of combination of curcumin and diclofenac sodium on the functional parameters or symptoms when used in the treatment of osteoarthritis.  In order to study the effect on functional parameters we divided the animals into different groups and treated them accordingly. The functional parameters considered in this study are motor function, hyperalgesia, paw volume, arthritis index and spontaneous mobility (Table 1).

TABLE 1: EFFECT OF VARIOUS TREATMENTS ON THE FUNCTIONAL PARAMETERS IN OA INDUCED RATS

The latency time for the licking or jumping response was recorder using Eddy’s Hot plate analgesiometer for measuring hyperalgesia. It has decreased in Group IV (15.5±2.88) when compared to Group II (8.83±1.47) and Group III (12.83 ±

FIG 3: EFFECT OF VARIOUS TREATMENTS ON HYPERALGESIA (NO. OF JUMOING AND LICKINGS) IN OA INDUCED RATS

TABLE 2: EFFECT OF VARIOUS TREATMENTS ON PERCENTAGE OF INHIBITION OF INFLAMMATION IN OA INDUCED RATS 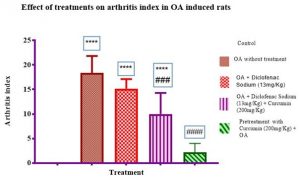 Statistical Analysis: All the values were expressed as mean ± standard deviation and data was analysed by One way Anova followed by Tukey’s multiple comparison test using Graph pad prism 7 software. P<0.05 was considered as statistically significant.

DISCUSSION: Osteoarthritis is an old age disease characterized by degeneration of articular cartilage. It is one of the most commonly occurring forms arthritis in the present scenario and also is the major cause of disability. It is most common in males than in females up to the age of 45. Due to hormonal changes after the age of 45 females are more prone to this disorder. Sedentary lifestyle, obesity, injury in joints also leads to OA.  The symptoms of Osteoarthritis like stiffness and pain in joints is of major concern as it is one of the main causes of reducing the health related quality of life. The treatment of Osteoarthritis includes pharmacological treatment, non-pharmacological treatment and psychological support.

Pharmacologically NSAIDs are the preferred drugs used in Osteoarthritis to reduce the pain as they are known to be effective anti – inflammatory and analgesic agents 8.  But all NSAIDs share common toxicities like dyspepsia, ulcer complications in stomach (erosions, bleeding or perforations), esophagitis, sodium retention, weight gain and edema, hyperkalemia, hypertension, acute renal failure, papillary necrosis,  acute interstitial nephritis, heartfailure, myocardial infarction, stroke, cardiovascular death, elevated transaminases level in liver, cytopenia, dizziness, confusion etc. These limitations of conventional drugs indicate a real need for safe and effective drugs for the treatment of osteoarthritis.  Traditional medicine has provided a large number of herbal medicines and basic scientific research has helped us to understand the efficacy and mechanism of action of these herbal medicines. Of these herbal drugs, the present study focuses on curcumin and its use as an adjuvant therapy in osteoarthritis. Curcumin is a pleiotropic molecule with excellent safety profile 9.

Recent investigations suggest its use in various inflammatory disorders. Curcumin is a potent anti oxidant and anti inflammatory agent. Its anti inflammatory effect is due its ability to specifically inhibit COX-2.  In this study, the role of curcumin is investigated in treating OA when used along with the conventionally used drug- diclofenac sodium The pain caused in Osteoarthritis can be measured by using functional parameters which includes hyperalgesia, inflammation, motor function and arthritis index. These functional changes in OA can be linked with the underlying pathological changes to gain a better understanding of the disease process.

Curcumin action on hyperalgesia: Curcumin is known to possess significant anti nociceptive properties. It acts on dorsal root ganglion or spinal ganglion and decreases the expression of CX3CR1 receptor which is usually expressed in microglial cells of spinal cord 10, 11, 12. This results in decrease in the neuropathic pain, inhibition of mechanical allodynia, reduction in hypersensitivity to thermal stimulation 13, 14, 15.

In all the functional parameters measured above Group V animals which are pretreated with curcumin and then induced with Osteoarthris show less or no symptoms of osteoarthritis. This effect is may be because of anti oxidant properties of curcumin which signifies a protective action on joints thereby preventing osteoarthritis.

CONCLUSION: Curcumin was found to improve the motor functions of the animal when given along with NSAID which is measured by different functional parameters thereby adding benefit to the present therapy. This can improve the therapeutic strategies and quality of life in Osteoarthritic patients. As it can prevent Osteoarthrits, Curcumin is the need of the hour for osteoarthritic research studies.

ACKNOWLEDGEMENT: The Corresponding author would like to thank Dr. K. Vijaya for her guidance, Dr. B. Bindu Madhavi and management of St. Paul’s College of Pharmacy for their constant support.