Significant increase in the salivary gland lipid peroxidation, fluorescence product as well as accumulation of lipofuscin granules–age pigment was observed after injection of 5% D-galactose 0.5 ml daily for 30 days. Supplementations of turmeric extract (30mg/kg body weight) for 30 days during and after D-galactose treatment significantly reduced all the above parameters. Histochemical changes in the form of accumulation of age pigment were observed in the submandibular gland (SMG) of experimental animals. The normalization of levels of all the studied parameters in the SMG by curcumin supplementation in D-galactose induced aging accelerated mice is suggestive of the possible ameliorating effect of curcumin on SMG. While in curative group II the levels of all parameters were elevated as compared to D-galactose treated group mice.

INTRODUCTION: Reactive Oxygen Species (ROS) are major sources of primary catalyst produced in our body during aerobic metabolism that initiates oxidation in vivo and in vitro and are created oxidative stress which results in numerous diseases and disorders such as cancer 1, Alzheimer disease 2, aging  3.

Lipofuscin pigments commonly referred as age pigments since the histological and biochemical observations that pigments concentration in cells increases with age 5-10 are proposed to be the stable metabolic end products of in vivo lipid peroxidation 11- 12 .

Medicinal herbs that are relatively safe, cheap and easily available constitutes the cornerstone of traditional medicinal practice worldwide. These medicinal plants represent a great deal of untapped reservoir of the drugs and the structural diversity of their component molecules makes a valuable source of novel lead compounds 13.

Curcuma longa (Family - Zingiberaceae) is a perennial shrub commonly called as ‘turmeric’. Curcumin, a yellow pigment in turmeric, has received attention as a promising dietary supplementation for the protection against fibrogenic insults 14, 15.

D-galactose is a normal reducing sugar in the body. At its normal level, it is usually converted into glucose by galactose-1-phosphate uridyltransferase and galactokinase. However, at high levels, it can be oxidized into aldehydes and H2O2 in presence of galactose oxidase 18. Administration of D-galactose induces symptoms similar to those of normal aging; many investigations using rodents have demonstrated that the injection of D-galactose can lead to excessive formation of ROS, neural damage and a significant decline in learning and memory capacity 19-20.

MATERIAL AND METHODS: 30 Swiss albino male mice Mus musculus weighing 50-55 gm were used for present study. The mice were kept in clean and dry plastic cages having bedding of rice husk and with 12 hr light-dark cycle at standard environmental conditions. The animals were fed with palletized commercial mice chow (Amrut mice feed, Sangli, MS, India), without any restriction to food or drinking water during the experimental period.

All animals were treated in accordance with the CPCSEA. After 24 hr of completion of treatment, all animals were sacrificed by cervical dislocation, SMG were removed, weighed, freezed and homogenized in respective homogenization media.

For histochemical demonstration of lipofuscin granules, SMGs were fixed in NBF, hydrated to remove excess fixative and then dehydrated through alcohol grades, cleared in xylene and embedded in paraffin wax. 5mm thick sections were taken with the help of microtome (Yorco, Lipshaw type).

TABLE 2. FLUORESCENCE PRODUCT IN THE SMG OF AGING INDUCED MALE MICE AND EFFECT OF CURCUMIN FEEDING ON THE SAME (Values are mean ± S.D.) 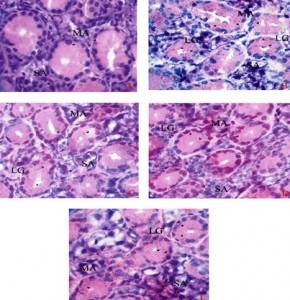 DISCUSSION: Normal biochemical processes produce free radicals in the cells. Thus the cells are always subjected to the attack of free radicals 23. These radicals are scavenged by various antioxidant enzymes such as glutathione peroxidase 24, catalase 25 and superoxide dismutase 26. Unscavenged free radicals exert peroxidative effect on polyunsaturated fatty acids of the membrane of cells as well as cell organelles 27.

Malonicdialdehyde is formed in extensive membrane lipid peroxidation. These peroxidized membranes are digested by lysosomes. The free radicals also bring about damage to lysosomes and lysosomal enzymes, making them inefficient which turn into residual bodies 28-30. These are the lipofuscin granules. As lipofuschin granules are auto fluorescent they lead to increase in fluorescence product also.

The accumulation of lipofuscin pigment as a function of age, oxidative stress and antioxidant deficiency has been known for many years. Present knowledge suggests that these pigments results from lipid peroxidation 31.

It has been shown repeatedly that oxidative stress promotes lipofuscin formation, whereas antioxidant defense prevents it.

Decrease in lipofuscin pigment after curcumin feeding curative group- I could be explained as a result of cell proliferation. Conceivably, proliferating cells many replace older lipofuscin-loaded ones. Curcumin has decreased the lipofuschin granules in the sub-mandibular glands and thereby resulted in highly significant decrease in fluorescence. While in curative group II in which mice were fed with curcumin for 45 days increase in lipofuscin pigments were observed. This may be due to long term administration of curcumin leads to accumulation of lipofuscin granules.

The antioxidant mechanism of curcumin has recently been a focus of interest of free radical chemist and biologist 37- 40. Barclay and collaborators compared the antioxidant activities of curcumin and dimethyl-curcumin against free radical initiated peroxidation of styrene in chlorobenzene solution and concluded that curcumin is a classical phenolic chain breaking antioxidant, donating H –atoms from the phenolic groups 37. Recently, Priyadarshani 39 also compared the antioxidant activity of curcumin and dimethylcurcumin against radiation-induced lipid peroxidation of rat liver microsomes and the free radical-scavenging activity against 2, 2- diphenyl-1 picryltry-drazyl (DPDH) and concluded that the phenolic group plays a major role in the activity of curcumin.

CONCLUSION: In conclusion, curcumin is effective antioxidant which can protect mice SMG cells from free radical induced oxidative stress and the H-atom abstraction from the phenolic group is responsible for its anti-oxidative property. Its lengthy history as a foodstuff might lead some consumers to conclude that turmeric is completely safe to use as a health aid. However, like virtually every other medicinal substance, man-made or natural, turmeric is not free from side effects, especially when taken in excessive doses.