INTRODUCTION: Diabetes Mellitus is a chronic metabolic disorder principally involving intermediary metabolism in general and glucose metabolism in particular due to subnormal functioning of insulin. The global prevalence of this disease is about 150 million and according to World Health Organization (WHO) and the expected number of people suffers from this disease worldwide may double by 2025 1.

Glucose is the major energy source for the red blood cell; the mature erythrocytes, however, lack the oxidative enzymes present in the mitochondria of most other cells. The red blood cells cannot depend on aerobic glycolysis to extract energy from glucose as in Kreb's cycle. They, therefore, use the Embden-Meyerhof pathway to aerobic process glucose into usable energy or adenosine triphosphate (ATP).

The red blood cells can limit aerobic glycolysis through the pentose phosphate shunt or the hexose monophosphate shunt. However, the major role of the hexose monophosphate shunt is not the oxidative metabolism of glucose but rather the generation of reduced NADPH 2. Apart from insulin and other hypoglycemic agents, many herbal preparations have been tried to improve glucose utilization in Diabetes mellitus. The World Health Organization (WHO) has also recommended the evaluation of plants effectiveness in controlling the spreading of diabetes mellitus as we lack in safe modern drugs 2. Many medicinal plants when subjected to scientific experi-mentations have yielded positive reports which the contemporary system of medicine could take up. Among the various biological activities of the medicinal plants studied, the hypoglycemic and hypolipidemic actions have been the most common ones 3. Since ancient times, these herbs and their extracts have been employed to control hyperglycemia of diabetes mellitus 4.

Previous studies have shown that allium group of plants, specifically garlic (Allium sativum Linn) has shown significant hypoglycemic effect in diabetes mellitus which is attributed to their sulfur compound, specifically diallyl disulphide (DADS). Though it is known that garlic or one of its active principles, DADS as well as other disulphides may influence insulin action or increase insulin’s half-life, the actual mechanism of action is still obscure 5. Therefore, a study was designed to prove the influence of DADS on glucose utilization in diabetic erythrocytes.

Sample Collection: The samples were collected from type 2 diabetic subjects attending the medical OPD of Subbaiah Institute of Medical Sciences, Shimoga, Karnataka, India, in the age group 30-55 years. Fasting heparinized blood sample (6-8 ml) was collected from these subjects (both normal as well as diabetic subjects) after obtaining informed consent. The normal blood was taken from the employees of Subbaiah Institute of Medical Sciences and other affiliated hospitals, Shimoga, India.

Experimental Design: The study included the diabetic erythrocytes preincubated and posted incubated with DADS, and the glucose levels are measured.

The solutions were allowed to stand at room temperature for 15 min. The contents of the tubes were thoroughly homogenized using a Remi homogenizer and later centrifuged at 3000rpm for 5 minutes; the clear supernatant obtained was used for glucose estimation6. The value obtained was considered a pre-incubation glucose level. The residues were incubated with DADS at 37 °C in a thermostatically regulated water bath for 60 minutes. After that, 0.5 ml of the solution was separately pipetted out into three different tubes containing 4.5ml of 10% TCA. The tubes were kept at room temperature for 15 minutes for protein precipitation. After 15 min, all the tubes were again homogenized and centrifuged at 3000rpm for 5 min. The values obtained were considered as post incubation glucose levels.

Statistical Analysis: Results were measured as mean ± S.E.M, and the statistical significance was calculated using a student t-test.

Statistical difference between the means of independent groups was analyzed using a one-way analysis of variance (ANOVA). P values less than 0.05 were considered significant. 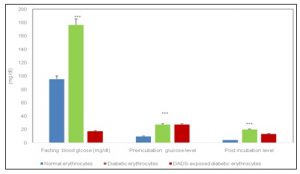 FIG. 1: EFFECT OF DADS ON GLUCOSE LEVELS IN DIABETIC ERYTHROCYTES. The values are expressed as mean ± SEM; ***p<0.001 statistically significant as compared to the normal erythrocyte. 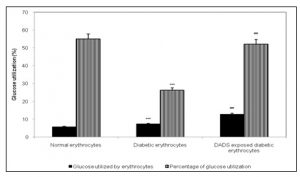 DISCUSSION: Diallyl disulphide is an aliphatic low molecular weight disulphide that undergoes degradation to produce thiols in the presence of NADPH/GSH dependent reductase 8. The thiols produced may alter the cellular thiol-disulfide ratio, which is detrimental to the functioning of thiol enzymes involved in glucose metabolism. It is known that low molecular weight thiols influence certain glycolytic enzymes' activity, thus favoring glucose utilization 9, 10. The present study results concerning glucose utilization by diabetic erythrocytes exposed to DADS showed a significant rise compared to diabetic erythrocytes. This is consistent with the above statement and shows the glucose utilization promotional-effect DADS in diabetic patients' erythrocytes. The allyl thiols, produced by the degradation of DADS have low molecular weight and have influenced glycolytic enzymes like hexokinase, phosphofructokinase and pyruvate kinase 11.

Similar to any other disulphide, DADS undergo sulphydryl exchange reaction with cellular thiol proteins or thiol enzymes 12. DADS also undergo a similar sulfhydryl exchange reaction with Protein Tyrosine Phosphatase (PTP) and inhibit their activity. Therefore, PTP’s and other insulin receptor substrates (IRS) may remain functioning, thereby enhancing glucose uptake and utilization. Earlier studies 13, 14 have reported that certain disulfides when given orally or intraperitoneally, may decrease certain glycolytic pathway enzymes. This can be explained that DADS might have undergone sufficient reduction to produce its thiol derivatives, and these thiols might have interacted with sulphydryl enzymes of the glycolytic pathway, thus favoring their actions by keeping these enzymes in their thiol forms.