EFFECT OF DIAZEPAM AND BICUCULLINE IN BODY WEIGHT REGULATION: POSSIBLE ROLE OF GABA TYPE A RECEPTOR

EFFECT OF DIAZEPAM AND BICUCULLINE IN BODY WEIGHT REGULATION: POSSIBLE ROLE OF GABA TYPE A RECEPTOR

INTRODUCTION: GABA (γ-aminobutyric acid) has been proposed to play a key role in the regulation of food intake and body weight 1. Psychological factors, genetic predisposition and eating habits can increase body weight which may lead to obesity 2.

It is a serious and rising public health burden worldwide; it is no more viewed as a cosmetic issue, but it becomes a potential risk factor of various co morbidities, such as type 2 diabetes, cardiovascular morbidity, cancer 2, 3. Thus, the obesity epidemic shortens the length and impaired the quality of life of current and future generations, and it presents a significant challenge to future health-care budgets. Obesity is characterized with accumulation of excess fat in body causing adverse affect on health 4, 5. Obesity occurs when the balance between food intake and energy expenditure is disrupted, i.e. more food is consumed than utilized, leading to excess fat stores being laid down. There are many environmental factors that predispose individuals to gain weight, e.g. freely available high-calorie food and sedentary life style. Genetic factors also contribute to this imbalance 6.

In the severely obese, surgical intervention may be necessary. An alternative approach is to develop therapeutic agents that can either reduce food consumption or increase energy utilization. Despite intensive research on obesity pathogenesis, an effective therapeutic strategy to treat and cure obesity is still lacking. Currently, only a few FDA-approved anti-obesity drugs like orlistat, lorcaserin, phentermine-topiramate and naltrexone-bupropion are available in the market, but they have considerable side effects 7. Exciting studies in last decades have established the importance of neural pathway in the hypothalamus in the regulation of body weight homeostasis. Recent research significantly expanded the list of neurotransmitters involved in body weight-regulating neural pathways 8.

Understanding the function of neurotransmitters released from key neurons for energy balance regulation was essential for delineating neural pathways and eventually for designing effective therapeutic drugs against the obesity epidemic. Considerable efforts had been devoted to the development of weight-control medications that target neurotransmitters in the brain that regulate food intake 9. Several neurotransmitters (dopamine, GABA, norepinephrine, serotonin) as well as peptides and amino-acids are involved in the regulation of food intake 10.

The cerebral mechanisms underlying the behaviours that lead to pathological overeating and obesity were poorly understood 11. GABA (γ-aminobutyric acid) a inhibitory neurotransmitter in the mammalian brain mainly present in the arcuate nucleus had been proposed to play a key role in the food preferences of selecting the type, quantity and quality of food by regulating the transmission of signals between neurons in brain circuits 12. Additionally, the GABA a inhibitory neurotransmitter mainly involved in eating behaviour in experiments using rodent models and GABA receptor agonists and antagonists 13.

GABA acts on two types of receptors: ionotropic GABAA receptors (GABAARs), which are mainly located postsynaptically and metabotropic GABA B receptors (GABABRs), which are located pre-synaptically as well as postsynaptically in the CNS 14, 15. The role of GABA was extensively explored on pathogenesis of obesity but the involvement of its different receptor subtypes was not well understood. The previous studies demonstrated that GABAB receptor agonist had body weight reducing effect 16 but the role of GABAA receptor in body weight regulation had not yet explored.

Animal Treatment: Male wistar rats of 7-8 weeks of age were procured from the animal facility of the Institute. The animals were housed in poly-propylene animal cages (two rats/cage) and maintained under controlled room temperature (25 ± 2 °C) with 12:12 h light and dark cycle. The guidelines of committee for the purpose of control and supervision of experiments on animals (CPCSEA), Government of India were followed and prior permission was sought from the institutional animal ethics committee (approval no. 1201/PO/RE/S/08/CPCSEA) for conducting the study. Animals were fed with normal chow (NC) or high fat diet (HFD) for 8 weeks. Animals were divided into different groups and each group contain 6 animals. Animals fed on NC were continued on same diet for further 8 weeks and were assigned as group 1.

At the end of the stipulated period, blood for various biochemical parameters was obtained by retro-orbital puncture under light ether anaesthesia and the animals were sacrificed by cervical dislocation. The blood was collected into tubes, serum separated and analyzed on the same day. The epididymal, mesenteric and retroperitoneal white adipose tissue (WAT) were dissected, cleaned of, weighed and stored in 10% buffered formalin solution for histological analysis. Lee index 22 i.e. (Body Wt in gms)1/3 / (ano-nasal length in cm) an index of obesity, was calculated at the end of the experiment.

Histological Analysis and Morphometry: Epididymal adipose tissue was fixed in 10% formalin and then embedded with paraffin. Tissue sections (10μm) were cut and mounted on microscope slides. After being air-dried, they were stained with hematoxylin and eosin and photographed at 100X magnification. At least two fields per slice and six slices per fat mass were analyzed for the purpose of quantifying adipocyte size.

Statistical Analysis: All values are expressed as mean ± standard deviation (STDEV). The significance of the differences between the means of various groups was established by one way ANOVA followed by Tukey’s multiple range test using the Graph pad Prism 4 software. The p value < 0.05 was considered to be statistically significant.

RESULTS: Administration of HFD for 8 weeks significantly (p < 0.05) increased body weight of animals then the age matched normal control rats and there was no significant difference of body weights of animals between the various treatment groups before initiation of treatment (Table 1).

FIG. 1A: EFFECT OF VARIOUS PHARMACOLOGICAL INTERVENTIONS ON ADIPOCYTE SIZE 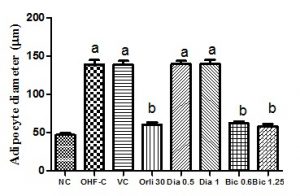 DISCUSSION: In the present study, experimental obesity was developed by long term high fat diet treatment. The body weight gain observed in the present study is consistent with studies in animal models, suggesting that exposure to high concentrations of carbohydrates or HFD contribute to the development of overweight or obesity 23.

Notably, metabolic disturbance results in elevation of plasma lipids 24 which is characterized by elevated TC, TG levels, LDL-C levels and decreased serum HDL-C 25. Further, feeding with high fat diet caused hyperglycemia in rats 26. Therefore the serum lipid levels (total cholesterol, LDL, VLDL, HDL, and triglycerides) and glucose levels were estimated in present study as the marker of hyperlipidemia and hyperglycemia. Hypercaloric diets can modify the GABA levels in the brain. There is a relationship between HFD intake and neurotransmitter concentration in the rat brain 27.

The role of GABA in the regulation of food intake is not well understood. The present study was undertaken to examine the role of GABA in experimental obesity by peripheral administration of GABA receptor modulators, bicuculline and diazepam in two different doses i.e. low and high dose. The present data demonstrated that in HFD rats, (1) high dose of  bicuculline treatment significantly reduced food intake, Lee index and body weight increase; (2) the weight of WAT was significantly decreased and the biochemical levels  of glucose, TG, TC, LDL and VLDL was significantly improved by high dose of bicuculline treatment; and (3) Diazepam in both low and high dose did not affect any parameter of obesity as compared to HFD rats, Moreover feed consumption was significantly increased after administration of  high dose of  diazepam.

The present study, confirmed these findings by employing bicuculline a GABA type A receptor antagonist, in high doses bicuculline significantly decreases the parameters of obesity. To our knowledge, this is the first study in which the effects of diazepam and bicuculline on diet induced obese rats were examined and our results suggest that the effects of these pharmacological innervations on food intake and body weight were clearly dependent on GABA receptor modulation.

Among peripheral signals related to energy balance, leptin, an adipocyte-derived hormone, plays a critical role in energy balance as evidenced by obesity resulting from a genetic deficiency of leptin (ob/ob mice) or its receptor (db/db mice) 30. Leptin decreases body weight by decreasing the GABA release from GABA-ergic neurons and disinhibition or stimulation of pro-opiomelanocortin (POMC) 31 expressions in the arcuate nucleus, plasma leptin levels are elevated in obesity probably due to reduced efficacy of brain leptin transport 32 or desensitization of its receptors 33 and desensitization of leptin receptor result in elevated GABA level. Thus, postsynaptic GABA especially GABA type A receptor blockade by its antagonist could be an alternative treatment for obesity.

One study showed that food restriction increases the GABA release from Agrp. The GABA action on POMC neurons decreases energy expenditure and  increase obesity, so by this correlation we can say that GABA mimetic action increases body weight while its antagonistic action decreases body weight, thus bicuculline block GABA action mainly through GABA type A receptor thus prevent obesity. Present study also suggest that there is less involvement of GABA type B  receptor in obesity as GABA type B agonist baclofen block GABA release through presynaptic GABA stores and decreased level of GABA in turn prevent obesity and body weight reduction in case of baclofen treatment was not due postsynaptic GABA type B receptor.

Furthermore, Diazepam a GABA type A agonist, increased food intake in HFD treated rats, increase in food intake in the present study were due to GABA type A receptor mimetic action of diazepam on POMC neurons which in turn decreases POMC activity. In this study, bicuculline decreased the weight and size of adipocytes of HFD fed rats. These changes in adipocytes possibly increased secretion of adiponectin from adipose tissues 34, leading to further improvement in glucose tolerance 35. Present data demonstrated that GABA type A antagonist bicuculline has the potential to work downstream of POMC receptor and thereby reduce food intake and increase energy expenditure in obese rats.

Ethical Approval: The guidelines of committee for the purpose of control and supervision of experiments on animals (CPCSEA), Government of India were followed and prior permission was sought from the institutional animal ethics committee (approval no. 1201/PO/RE/S/08/CPCSEA) for conducting the study.

CONFLICT OF INTEREST: Author declares no conflicts of interest.