INTRODUCTION: Bacillus sp. are considered to be the most important sources of amylase and have been used for its production 1, 2. Bacillus amyloliquefaciens is responsible for much of the world production of α-amylase and protease. The Starch degrading amylolytic enzymes have a great commercial value in biotechnological applications ranging from food, fermentation, textile to paper industries 3, 4.

Although Amylases can be derived from several sources such as plants, animals and microbes, however, the microbial amylases meet industrial demands and have almost completely replaced chemical hydrolysis of starch in starch processing industries 4. Both submerged fermentation (SmF) and solid state fermentation (SSF) could be used for the production of amylase, although traditionallyhave been obtained from submerged cultures 5.

Many researchers have studied amylase  production with a wide variety of substrates and microorganisms like  bacteria, yeast and fungus. Due to the ever increasing demand of  this  enzyme, people are still trying to increase the  productivity  of amylase by   a  variety  of   approaches like  selection of a high enzyme producing strain, process optimization, usage of cheaper substrates, effective downstream processing. The enzymes of amylase family have great significance due to its wide area of potential application 6. Bacillus amyloliquefaciens mostly produce carbon dioxide, butanediol, acetate and a small amount of lactate 7.

Inoculum Preparation: The pure bacterial culture was raised on amylase production medium. The medium was composed of (g/l): 1.0 Starch, 6.0 Peptone, 0.5 MgSO4 and 0.5 KCl. The pH 7.0 of the medium  was adjusted with 1N NaOH and was autoclaved at 121°C for 15 minutes. After inoculation it was then incubated at 37°C for 72 hours and was used as inoculum.

Substrate: Banana Peel was used as substrate for amylase production. It was obtained from fruit market and chopped into small pieces of uniform sizes.

Enzyme Extraction: After optimum incubation period the experimental   flask was harvested. The fermented biomass sample was filtered and centrifuged at 5000 rpm for 15minutes at 10°C temperature  in  the centrifuge  to remove the spores of the organism. The supernatant was carefully collected and the crude enzyme thus obtained was subjected to enzyme assay.

Enzyme assay: 0.5 ml of appropriately diluted enzyme solution was incubated for 15 minutes with 0.5 ml of mixture of 1% starch (substrate) and 1xPBS. The reaction was terminated by adding 1 ml of DNS reagent and the mixture was boiled for 15 minutes in water bath and diluted with 8 ml water. The absorbance was read at 540 nm. This absorbance was translated by plotting against standard curve to get µmoles of maltose to calculate units of enzyme activity.

One unit of enzyme activity is defined as the amount of maltose (μ moles) released per ml of enzyme solution per minute.

Where, U is enzyme unit in μ moles/min.

Kelly et al., (1997) 8 reported in case of B. flavothermus the highest amylase activity with maximum biomass was obtained when lactose was used as carbon source. Similar results were also observed by 1, 6 in Bacillus spp. It has been reported that the synthesis of carbohydrate degrading enzymes in most species of the genus Bacillus is subjected to catabolic repression by readily metabolisable substrates 3. 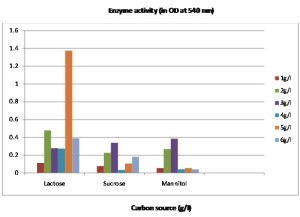 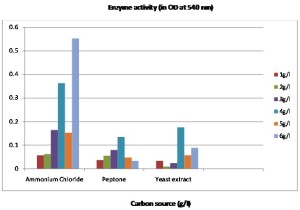 Magee RJ and N Kosaric 9 also observed the ammonium chloride as the best nitrogen source for the production ofα -amylase  from B. amyloliquefaciens.α-amylase yield was high in media containing ammonium chloride assole nitrogen source. Peptone and yeast extract also served asgood substrate for enzyme synthesis.The nature and relative concentration of nitrogen sources are important in the formation of α- amylase. Lower levels of nitrogen are inadequate for the enzymeproduction and excess nitrogen is equally detrimentalcausing enzyme inhibition.