Medicinal plants represent a rich source of antimicrobial agents. The traditional medicine involves the use of different plant extracts of bioactive constituents. Ficus is a huge tropical deciduous or evergreen tree with more than 800 species.

Purpose:  Ficus benghalensis, Ficus religiosa, Ficus recemosa are important ingredients in many siddha, ayurveda and traditional formulations and used for the treatment of bacterial infections. An attempt was made to study the antibacterial effect of Ficus sp., by appropriate methods.

INTRODUCTION:Medicinal plants have been used an exemplary source for centuries as an alternative remedy for treating human diseases because they contain numerous active constituents of therapeutic value 1. The potential of higher plants as source for new drugs is still largely unexplored. Thus, any phytochemical investigation of a given plant will reveal only a very narrow spectrum of its constituents. Plants are important source of potentially useful structures for the development of new chemotherapeutic agents.

The first step towards, this goal is the invitro antibacterial assay 2.

Infectious diseases are the leading cause of death world-wide. Antibiotic resistance has become a global concern 3. The clinical efficacy of many existing antibiotics is being threatened by the emergence of multi-drug resistant pathogens 4. Staphylococcus aureus is one of the major pathogens found on the mucous membranes and the skin of around a third of the population. It’s extremely adaptable to antibiotic pressure. It was the first bacterium in which penicillin resistance was found. MRSA was responsible for 37% of fatal cases of blood poisoning in the UK in 1999; up fro 4% in 1991, half of all S. aureus infections in the U.S are resistant to penicillin, methicillin, tetracyline and erythromycin. Considering the vast potentiality of plants as sources for antimicrobial drugs with reference to antibacterial agents, a systematic investigation was undertaken to screen the antibacterial activity of three different species from Ficus genus.

The genus Ficus includes some 750 species of woody plants occurring in most tropical and subtropical forests throughout the world 5. The genus is remarkable for the large variation in the habits of its species 6.

Ficus benghalensis: Ficus benghalensis belongs to the family Moraceae, which is commonly known as Banyan tree.  The tree is a fast growing, evergreen tree found in monsoon and rain forests grow up to 30 meters, with spreading branches and many aerial roots. Figure 1 shows the fully grown banyan tree with aerial roots. 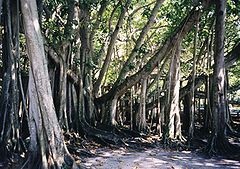 Ficus religiosa: Ficus religiosa Linn (Moraceae) commonly known as ‘Peepal tree’ is a large widely branched tree with leathery, heart‐shaped, leaves on long slender petioles and purple fruits growing in pairs. The tree is regarded as a sacred tree to both Hindus and Buddhists. It has got mythological, religious and medicinal importance 7. Figure 2 shows the branched peepal tree and figure 3 represents the typical leaf structure of the same tree. 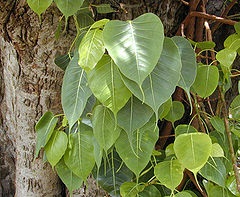 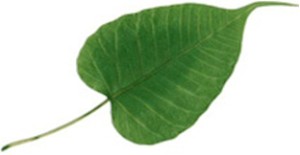 Ficus recemosa: Ficus racemosa synonymously also known as Ficus glomerata. An evergreen tree 50-60 ft. high; young shoot glabrous, pubescent or scaberulous. Leaves 3-6 by 1.25-2.5 in. long, glabrous; stipules 0.75 in. long, ovute- lanceolate, scarious, pubscent. Peceptacle shortly pendunculate, on short leafless warted branches often only a few inches long which issue from the stem and larger branches, muchcontracted at the base when young, subglobes, pyriform or subturbinate, 1.5 in. across, smooth or pubscent, red when ripe, with depressed umbilicus (edible but usually full of worms) ; basal bracts 3, ovate triangular ; male, female and gall flowers together in one receptacle, the male flower forming a zone near the mouth, the fertile female flowers forming a layers near the  walls of the receptacle, and the gall flowers a more internal layer. Figure 4 shows the branched Ficus recemosa tree with figs. 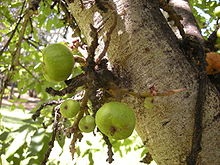 Malparmaram is an important group of ayurvedic formulation that constitutes the barks of Ficus recemosa, Ficus religiosa and Ficus benghalensis widely used in the treatment of skin diseases and also used in various ailments 11, 12.

Preparation of Extracts: Aqueous and methanolic extracts of bark of Ficus benghalensis were prepared in 20g/200ml.The solvent of organic extract was dried at 60oC protected from light. The dried bark powder stored at 4oC until use.

Phytochemical analysis of the Plant Extract: The extracts were subjected to phytochemical tests for plant secondary metabolites, tannins, saponins, flavonoids, alkaloids and glycosides in accordance with Allan 16 and Harborne 17 with little modification (table 1).

(A)   Dragendroffs reagent: 8g of bismuth nitrates Bi (NO3)3.5H2o was dissolve in 20ml of HNO3 and 2.72g of Potassium iodide in 50ml of H2O. These were mixed and allowed to stand for deposition of KNo3 Crystals. The Supernatant was decanted off and made up to 100ml with distilled water.

Procedure: To 0.5ml of leaf extract 2ml of HCl was added.  To this acidic medium 1ml of dragendroffs reagent was added on, orange or red precipitate produced immediately indicate the presence of alkaloids.

(B)   Mayer’s test: 1.36g of Mercuric chloride was dissolved in 60ml of distilled water and 5g of Potassium iodide in 10ml of water. These two solutions were mixed and diluted to 100 ml with distilled water.

Procedure: 1.2 ml of plant extract was taken in a test tube and to this 0.2 ml of dilute HCl and 0.1 ml of Mayer’s reagent was added. Formation of yellowish Puff coloured precipitate indicates the presence of alkaloid.

If the color of iodine disappeared in 5 min, the isolate was considered beta-lactamase positive 21.

Antibacterial activity of different Extracts: The antibacterial activity was studied using the disc-diffusion Method 22. Bacteria were grown overnight on Mueller Hinton agar plates, five young colonies were suspended with 5ml of sterile saline (0.9%). The swab was used to inoculate the dried surface of MH agar plate by swabbing several times four times over the surface of the agar. The medium was allowed to dry for about 3 min before adding a sterile paper disc of 9mm diameter. Compounds (50µg) were weighed and dissolved in 1ml of 7% acetone. Twenty microlitres of the compounds were introduced on each disc (five replicates) and 7% acetone alone served as a normal control. The plates were incubated at 37 ◦C for 24 h; inhibition zones were measured and calculated.

RESULTS: Herbal extracts contain different phytochemicals with biological activity that can be of valuable therapeutics Index. Plants have the ability to produce a large variety of secondary metabolites (Phytochemicals) such as terpenoids, phenyl- propanoids, flavonoids and alkaloids which together account for over 2,00,000 compounds 23.

In the present study, three Ficus species namely, Ficus benghalensis Ficus religiosa and Ficus recemosa were analyzed for their phytochemical constituents. During the last three decades, the development of drug resistance and their undesirable side effects of certain antibiotics have led to the search of new antimicrobial agents mainly among plant extracts with the goal to discover new chemical structures. Preliminary screening of antibacterial activity was conducted for the three Ficus sp; against both gram positive and gram negative type of bacterial and two pathogenic fungal species. Among, those Ficus benghalensis showed the highest inhibition of both Gram positive and Gram negative bacteria and fungi.

The antimicrobial activity was determined by measuring the diameter of the zone of inhibition, i.e. the mean of triplicates ±S.D. In recent years, secondary plant metabolites (phytochemicals) previously with unknown pharmacological activities have been extensively investigated as a source of medicinal agents 24.  Phytochemicals with adequate, antibacterial effect will be used for the treatment of bacterial infections 25. It is time to examine more closely our natural resources, i.e., the plants, which contain compounds of potential medical use.

Ficus benghalensis: Acetone extract of F. benghalensis showed good antibacterial activity against the entire tested gram positive and gram negative bacteria. The same extract was found to be very active against P. vulgaris, measuring 14.3 mm of zone of inhibition. Methanol extract of the plant found to be potentially good antibacterial activity against all the bacteria except P. aeruginosa. Ethyl acetate extract of F. benghalensis was active against E. coli, S. aureus and B. subtilis.

Ficus religiosa: The growth of Bacillus subtilis was significantly inhibited by acetone extract of Ficus religiosa. Higher concentrations of the same extract were required for the inhibition of E. coli.  Methanol extract of the plant was very active against all the tested bacterial pathogens except P. aeruginosa. Ethyl acetate extract was not active against all the bacterial species.

Ficus recemosa: Acetone extract of Ficus recemosa was found to be active against E. coli, Proteus vulgaris and Bacillus subtilis. It showed maximum activity against Proteus vulgaris measuring 14.0mm of zone inhibition at 100µg/ml. Methanol extract of plant was found to be active against E. coli, P. vulgaris and B. subtilis and P. aeruginosa. The ethyl acetate extract showed no anti bacterial activity against all the tested bacteria. The mean zone of inhibition on obtained using the agar disc diffusion assay ranged from 6mm (for Pseudomonas aeruginosa) to 14mm (Proteus vulgaris, Bacillus subtilis, E. coli). 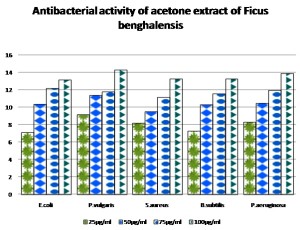 DISCUSSION: The previous studies on the phytochemical screening of Ficus benghalensis revealed the presence of saponins, tannins and flavonoids in aqeous and methanolic extract 26. The preliminary phytochemical analysis of the methanol extract of Ficus religiosa bark studied by Uma et al., showed the presence of flavonoids, saponins and tannins 27.

The phytochemical screening of Ficus recemosa bark (various extracts) studied by Poongothai et al., showed the presence of alkaloids, flavonoids, glycosides, saponins, tannins and triterpenoids and the absence of anthraquinones 28.

The methanol extract of Ficus religiosa and Ficus recemosa showed moderately good antibacterial activity against all tested bacterial strains. The ethyl acetate extract of these plants were less potent against most of the pathogens tested.

CONCLUSION: These findings suggest a new pathway in elucidating a potent antimicrobial agent from Ficus benghalensis. The present study indicates that the plant contains antimicrobial compound which can be further developed as phytomedicine for the therapy of infection.

Such screening of various natural organic compounds and identification of active agents is the need of the hour because successful prediction of lead molecule at the onset of drug discovery will payoff later in drug discovery.

ACKNOWLEDGEMENT: I am thankful to Mr. S. Shankaranarayanan for his guidance throughout the work. I also extend my thanks to Mr. G. Sampathkumar. The work is dedicated to all my teachers and students.